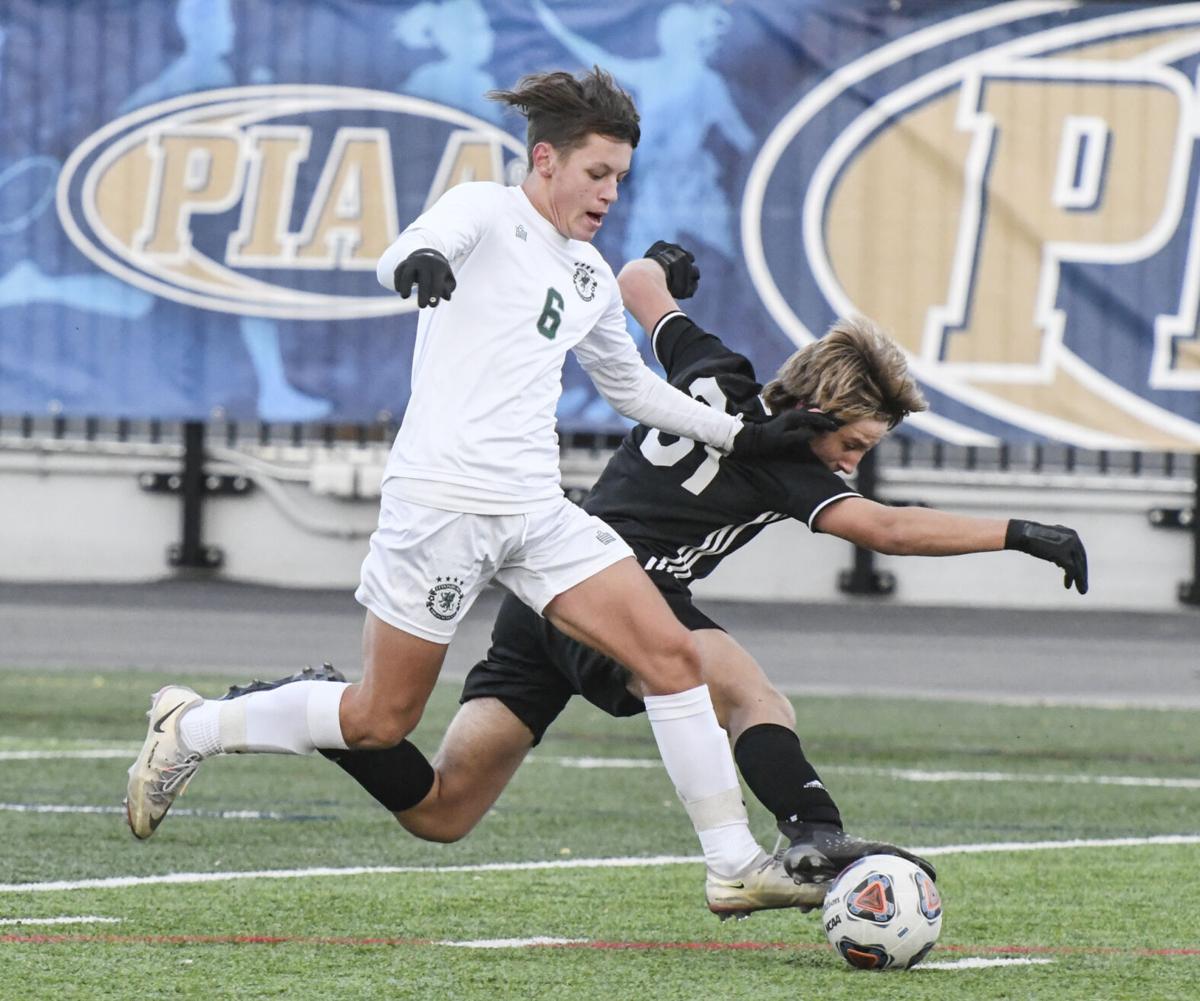 Lewisburg’s Reese Dieffenderfer gets by Quaker Valley’s Nick Allan on a run during Friday’s state final. 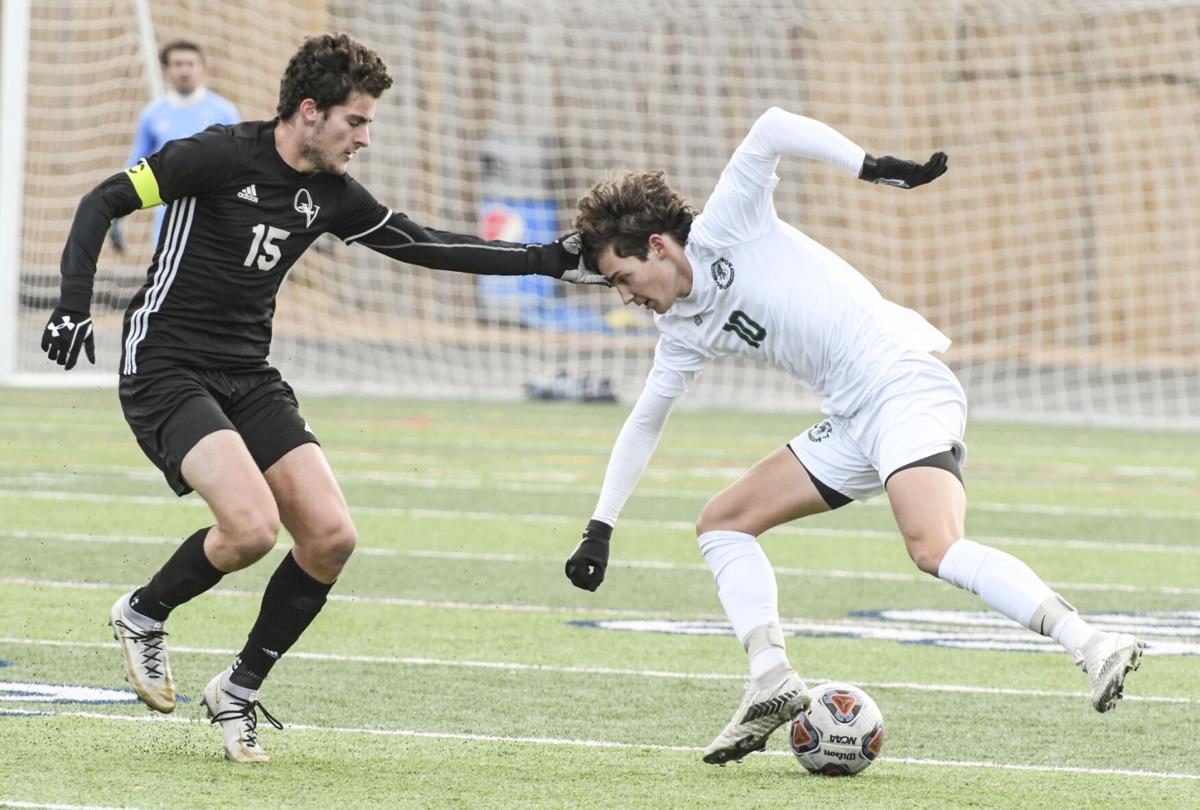 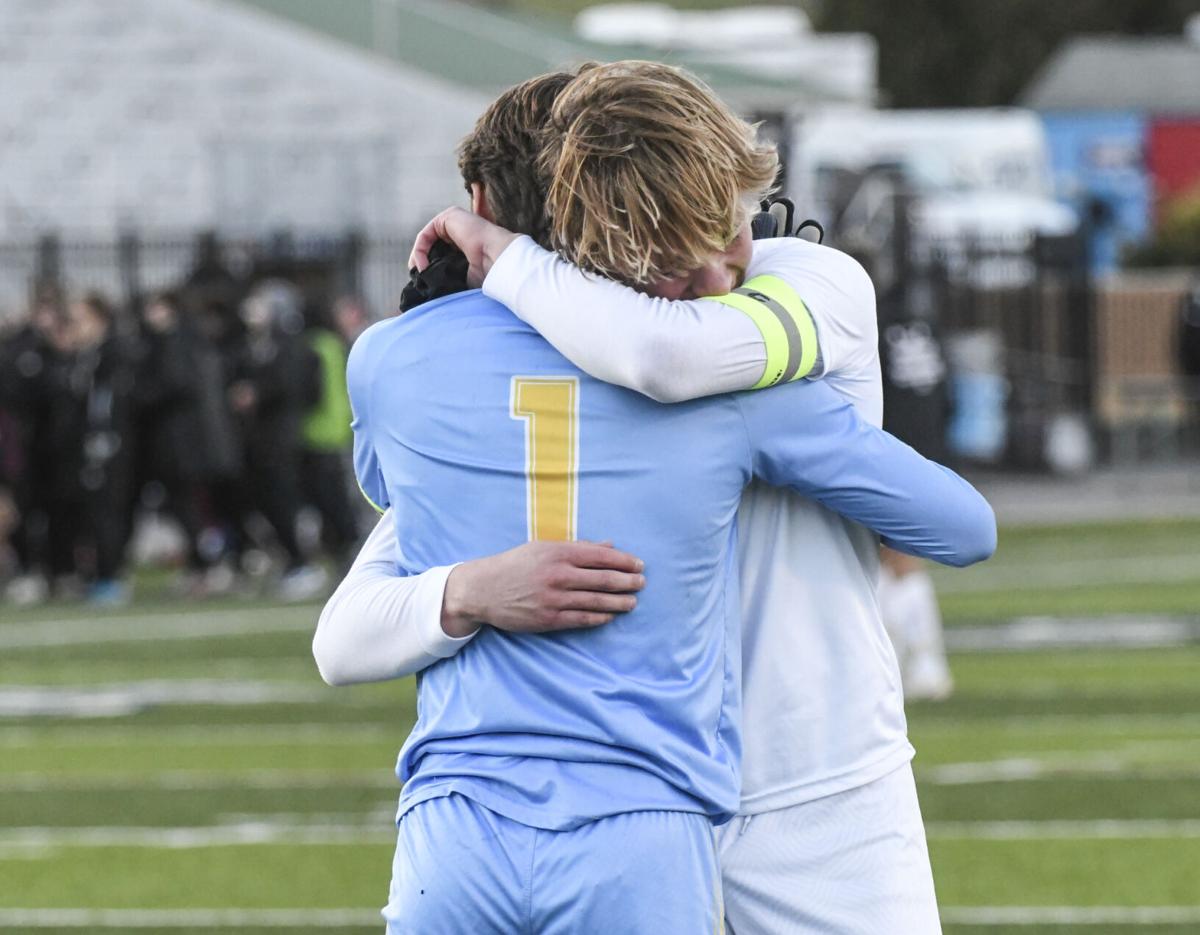 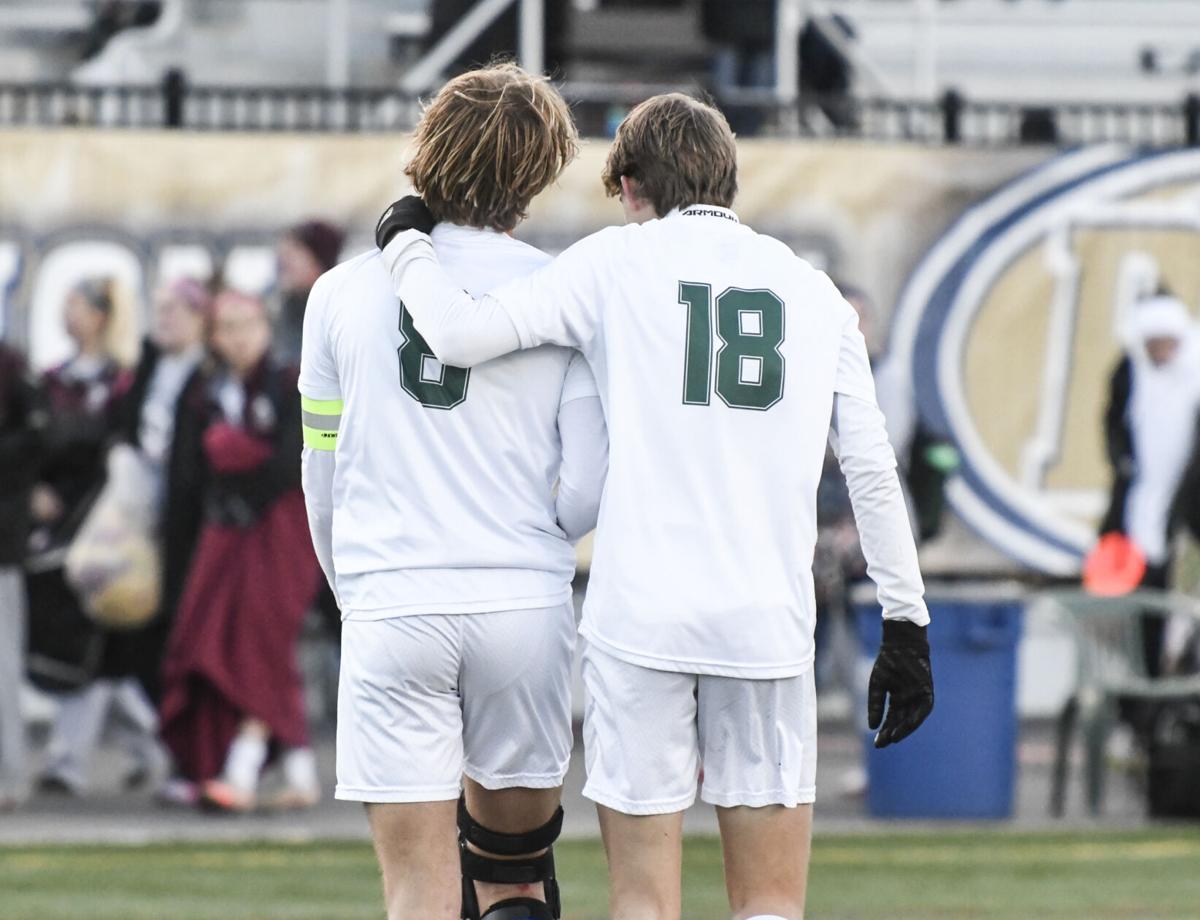 Lewisburg’s Simon Stumbris, left, and teammate Rudy Kristjanson-Gural walk off the field together after a shootout loss in the state finals on Friday to Quaker Valley. 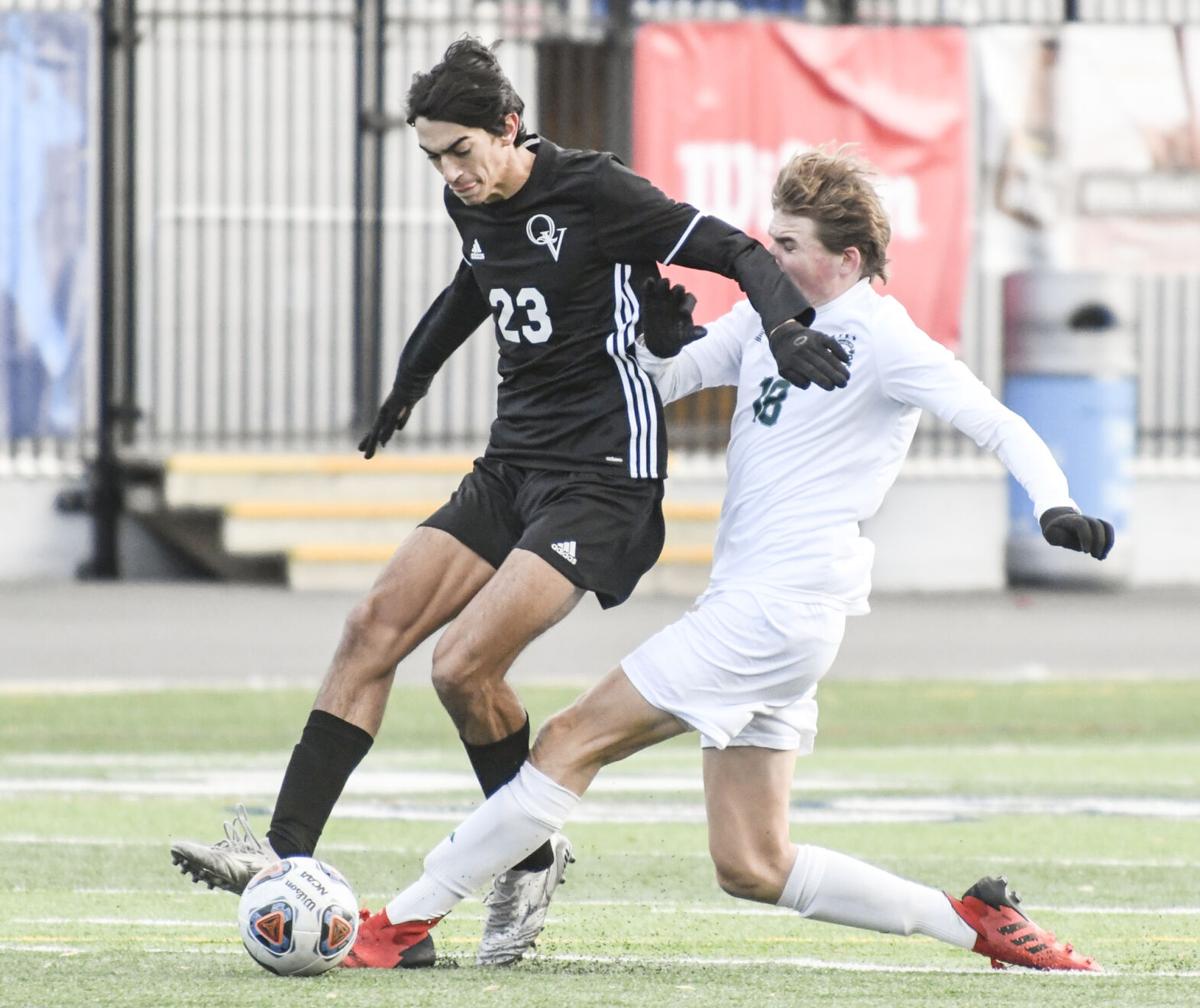 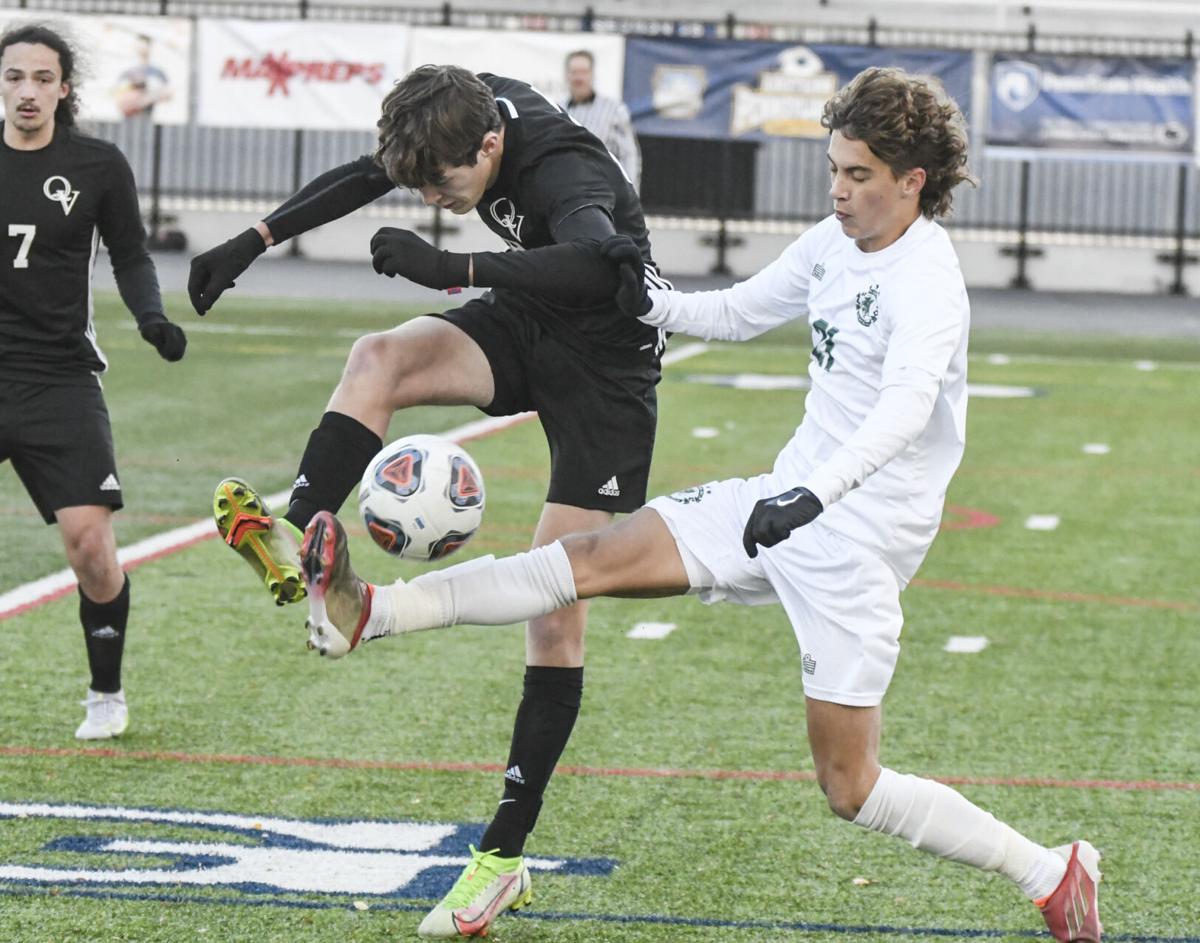 Lewisburg’s Reese Dieffenderfer gets by Quaker Valley’s Nick Allan on a run during Friday’s state final.

Lewisburg’s Simon Stumbris, left, and teammate Rudy Kristjanson-Gural walk off the field together after a shootout loss in the state finals on Friday to Quaker Valley.

HERSHEY — After Lewisburg advanced past Midd-West in a shootout in the state semifinals, Green Dragons coach Ben Kettlewell likened the series of spot kicks to "a coin flip."

Well, Lewisburg came out on the wrong side of another coin flip Friday in the Class 2A boys soccer state final.

After 120 minutes of scoreless soccer, Quaker Valley topped Lewisburg 5-4 in a shootout to deny the Green Dragons a second straight state crown.

"Obviously, I'm happy that we got here again, but we didn't get the result, so I'm disappointed and upset," Lewisburg senior Carter Hoover said. "I'm super proud of the boys and what we were able to accomplish this year. We were able to prove a lot of people wrong, who thought after losing a lot of seniors last year we'd just go down the drain."

The Quakers won the state title in 2019.

"It's a tough way to lose," Kettlewell said. "I thought our guys played courageous out there. They went for it at moments, and it didn't turn our way. We were a pass, a touch away. ... My guys showed up today, and it was one kick difference."

Lewisburg goalkeeper Tony Burns made 13 saves during the run of play to shut out the Quakers (23-2) for only the second time this year. Quaker Valley scored 20 goals in its first three state playoff games, and averaged nearly 7 goals per game before the state final.

In the shootout, though, the Quakers took five great shots, putting them past Burns, who made two saves in the shootout against Midd-West.

"My thought process going into PKs is I have to do the best I can to make an educated guess," Burns said. "It just didn't work out in my favor, and that's how it goes in PKs."

That meant the Green Dragons (20-2-1) had to be perfect, as well, but only made four of five shots, with one attempt going over the crossbar.

"It really sucks," Lewisburg junior Zach Kreisher said. "We played really well all season. They're a really good team, and we held them all game. It's just unlucky.

"We already won one PK shootout, and it's really hard to win two."

Quaker Valley was led by Keller Chamovitz (50 goals) and Rowan Kriebel (40 goals), but could not solve Burns and the Lewisburg defense.

"They were good," Hoover said. "They were quick, and they had a couple guys up top who could dribble through us."

Through the first 80 minutes, the Quakers took only one shot on goal that troubled Burns. Cameron Diggins ripped a shot on the half-volley from just inside the 18 that Burns tipped over the crossbar. Ryan Edwards drilled the crossbar from 30 yards out in the first half as well.

Other than those two shots, the Green Dragons limited the danger Burns faced through the first 80 minutes.

"We were just making sure we had our marks," Hoover said. "When they were coming at us, we needed to stand them up and wait for somebody with back pressure to tap the ball away our make the tackle. Our backline did a phenomenal job of slowing them down, allowing our midfield and our wingers to get back."

Lewisburg senior Caleb Kim shadowed Chamovitz for most of the game, and held him to only two shots from inside the 18.

Kim, Kreisher, Simon Stumbris and Ian McKinney were charged with holding up the dangerous Quaker attackers to allow the midfielders to track back and lend defensive support.

"We backed each other up," Kreisher said. "We were extra careful on defense. ... We held in there and did a great job."

That allowed players such as Hoover, Rudy Kristjanson-Gural, Darrien Svilokos, Reese Dieffenderfer and Noah Pawling to come in and make defensive plays before Quaker Valley could get in good positions to score.

"We work on it," Kettlewell said. "We talk about being patient. We talk about backing each other up, and staying as a unit. It's not that we have to win the ball; it's putting pressure and making the other team make decisions faster than they want to make them."

Quaker Valley's best chance to score came with two minutes left in the first overtime. Diggins beat Burns to a ball and tapped it toward the open net, but McKinney cleared the ball before it crossed the end line.

The Green Dragons had a hard time getting much going offensively in the first half with a stiff wind blowing in their faces.

"I think we struggled a bit with the wind," Hoover said. "We weren't able to find a rhythm and get in the zone."

Kettlewell added: "Quaker Valley is a very, very, very good team, very dangerous from many places. I think some of it was nerves. Some was the wind. Some was them."

The Green Dragons got things going with the wind at their back in the second half. Lewisburg had a pair of dangerous chances within the span of a minute, but neither led to a shot. With 8:40 to go in the second half, Kreisher nailed a header that went just over the crossbar.

"We knew if we could withstand that first 40 minutes, we would have a chance to win the game," Kettlewell said.

After 120 minutes, the state final was decided by a shootout, leading to a disappointing end to the Green Dragons' season.

Still, heading into a season in which many people wrote off Lewisburg, according to Hoover, there was a lot to be proud of as the Green Dragons returned to the state final despite replacing eight starters from last year's team.

"That's the change we've had and how the guys have bought into everything," Kettlewell said. "It's really worked."

On of the biggest examples of that was Pawling, who served as a ball boy for last year's state final as a freshman, and played most of this year's final in perhaps his best performance of the season.

"He was very good," Kettlewell said. "Noah was completely out of his position playing a wing. He played a lot of defense. Noah does a great job. He will play wherever you want him and work his tail off."