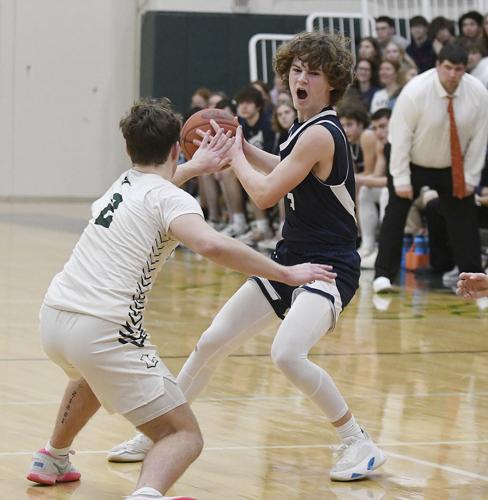 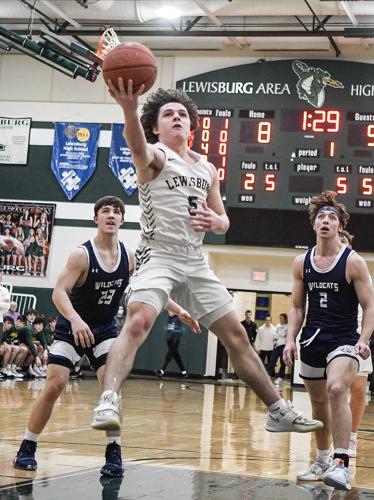 Lewisburg’s Cam Michaels goes up for a shot during Tuesday’s game against Mifflinburg at Lewisburg High School. The host Green Dragons won, 51-46. 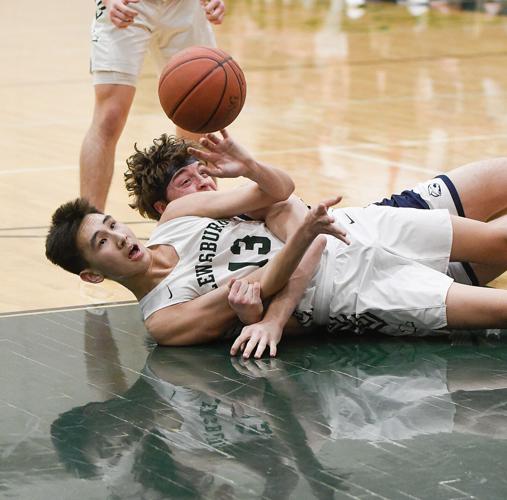 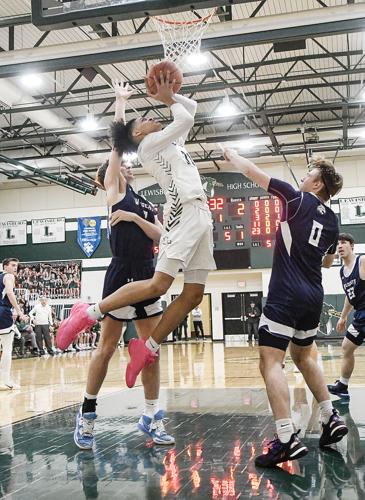 Lewisburg’s Neyshawn Mabry goes up for a shot between Mifflinburg’s Ethan Bomgardner, left, and Tyler Reigel during Tuesday’s game.

Lewisburg’s Cam Michaels goes up for a shot during Tuesday’s game against Mifflinburg at Lewisburg High School. The host Green Dragons won, 51-46.

Lewisburg’s Neyshawn Mabry goes up for a shot between Mifflinburg’s Ethan Bomgardner, left, and Tyler Reigel during Tuesday’s game.

LEWISBURG — For 24 minutes Tuesday night, Lewisburg looked like the defensive team its coach thinks it can be.

The Green Dragons' defense played well enough to cause two lengthy scoreless spells by Mifflinburg, and Cam Michaels attacked the rim at will, scoring a game-high 22 points to set up a Friday night showdown against Danville with a 51-46 win over the rival Wildcats in Heartland Athletic Conference-Division II play.

"We were getting good looks; we just couldn't finish. We were crashing the glass, and stuff like that," Mifflinburg coach Ian Elliot said. "I said in the locker room, 'It was unforced errors, and missed shots.' We've been focusing on the want-to and our effort. That was there, but we just didn't hit enough shots."

The Green Dragons built an early five-point lead Tuesday, but Ethan Bomgardner scored eight points, six in the final three minutes of the period, and Zach Wertman hit a foul shot with one second left to give the Wildcats a 14-13 lead.

However, that's when the Wildcats (10-7, 2-5) hit one of the slumps, missing their first six shots of the second quarter. The Green Dragons scored the first 12 points of the quarter, and led 25-14 when Michaels hit a driving layup with 3:14 left in the half.

Bomgardner didn't score in the second quarter. He had little trouble with Lewisburg's sophomore big man Nyshawn Mabry, who is well on his way to being a defensive force with three blocks and two steals Tuesday.

"Nyshawn is getting better, but he's so used to being 6-foot-5, 6-foot-6, and with his length, other guys, when they get it in the post, he's able to block their shots," Vaji said. "But Bomgardner is an outstanding post player, and he posts up long, and he knows how to get into a position to score. Nyshawn is going to learn (on the defensive end) and get better at that."

When Mabry went to the bench early in the second quarter, junior Tsogtoo Batbaatar limited Bomgardner to just two shots during the Green Dragons' run.

Aaron Bollick broke the Mifflinburg scoreless stretch with a driving layup with 3:08 left in the first half, and the Wildcats were able to get the lead under 10 at the break.

Lewisburg would take a 30-20 lead early in the third on a Wade Young foul shot, but Mifflinburg would outscore Lewisburg 18-8 in the quarter, including an 8-0 spurt in the final two minutes. The Wildcats took a 38-37 lead on Jackson Griffith's 3-pointer with 1:11 left in the third.

"I think once we got it to double digits (in the second quarter) we let up a bit," Vaji said. "Then in the third quarter we panicked a little bit. We rushed some shots, and it was a little surprising to me because it was our older guys."

Griffith's 3-pointer would be the last field goal for Mifflinburg for nearly 6 1/2 minutes. The Green Dragons scored the first 10 points of the fourth, capped by back-to-back 3-pointers by Henry Harrison and Young, to take a 47-38 lead with 3:30 left in the game.

Lewisburg went just 2-of-6 from the line in the final minute, allowing the Wildcats to get back within five. Mifflinburg missed its next two chances to get closer.

In addition to Michaels, Mabry finished with 10 points and eight boards, while Harrison chipped in eight points.

Bomgardner had 20 points and nine rebounds, while Tyler Reigel finished with 12 points for Mifflinburg.

Did not score: Chad Martin.

Did not score: Dylan Dershem.