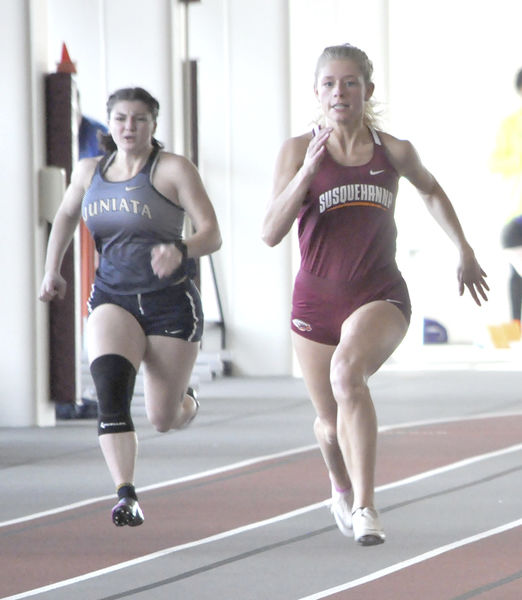 Susquehanna junior Sara Arbogast, a Selinsgrove High graduate, competes in a sprint during an indoor meet. Arbogast, right, along with Chris Petraskie, was supposed to compete for the River Hawks at the NCAA Division III indoor meet last weekend. 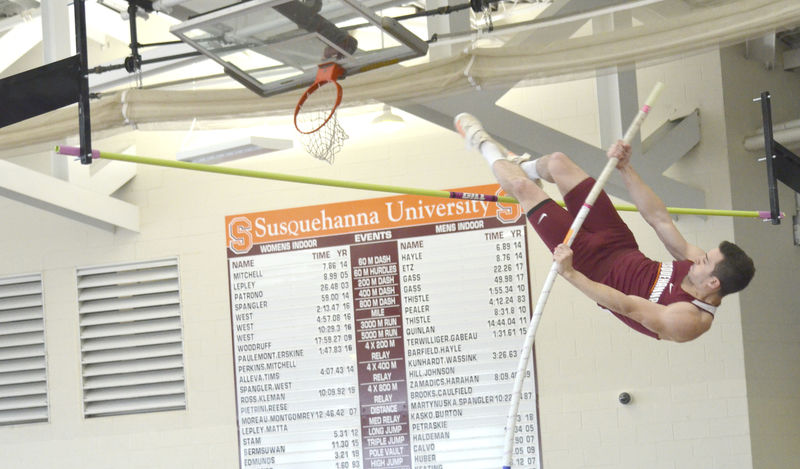 Susquehanna senior Chris Petraskie, a Shamokin High graduate, competes in the pole vault during an indoor meet. Petraskie, along with Sara Arbogast, were supposed to compete for the River Hawks at the NCAA Division III indoor meet last weekend.

Susquehanna junior Sara Arbogast, a Selinsgrove High graduate, competes in a sprint during an indoor meet. Arbogast, right, along with Chris Petraskie, was supposed to compete for the River Hawks at the NCAA Division III indoor meet last weekend.

Susquehanna senior Chris Petraskie, a Shamokin High graduate, competes in the pole vault during an indoor meet. Petraskie, along with Sara Arbogast, were supposed to compete for the River Hawks at the NCAA Division III indoor meet last weekend.

Sixteen hours seems to be a short period of time — and it typically is — but that’s how close the Susquehanna University tandem of Sara Arbogast and Chris Petraskie were to competing at the NCAA Division III Track and Field Championships.

Suddenly, the meet was scrapped and, a day later, everyone returned home due to the coronavirus pandemic

That was a week ago, when Arbogast, Petraskie, Susquehanna track and field coach Ethan Senecal and assistant Tabitha Bemis were headquartered in Winston-Salem, N.C., waiting for the two-day meet to begin on a Friday morning.

Upon arriving in Winston-Salem on Wednesday, Arbogast and Petraskie trained twice at the JDL Fast Track complex — the host venue. They’d also encountered and mingled with a number of their fellow competitors at various times.

“I was just pretty devastated,” said Arbogast, a junior triple jumper from Selinsgrove. “There was like a huge rain cloud over my head, because we all worked so hard to get where we were down there. It wouldn’t have been as much of a devastation if it wasn’t so close to the meet. We had our hopes up that it wasn’t going to get canceled.

Unfortunately, the coronavirus pandemic is really happening as the numbers of individuals testing positive continue to grow.

“I didn’t think it would be real,” said Petraskie, a senior multi-event/jumper from Shamokin who was scheduled to compete in the heptathlon. “I didn’t think they would actually do something the day before we competed. We were already up there for two days and had been exposed to the environment. I don’t know.

“It’s hard to imagine why the day before they would decide to cancel it.”

Petraskie actually was scheduled to begin his pursuit of heptathlon gold last Friday morning (11 a.m.) — he was the No. 13 seed in a seven-pronged event he’d competed in only three times before — with the start of the 60-meter dash.

The long jump, shot put and high jump were to follow on Friday, while Saturday’s lineup was to include the 60-meter hurdles, pole vault and 1,000-meter run.

Ultimately the NCAA Division III championship meet was canceled, as the NCAA scrapped that event along with all of its winter competitions at all levels. The NCAA also canceled all of the championships scheduled for the remainder of the 2019-20 school year.

Since concerns about coronavirus exposure were multiplying minute by minute, Senecal attempted to prepare his student-athletes for the possibility that the NCAA could arrive at the decision the governing body did.

While Susquehanna’s traveling party was in its hotel rooms preparing to go to dinner — the NCAA also had scrapped its pre-championship banquet — Arbogast and Petraskie learned through social media that the meet was off.

“We were hopeful that since we were already down there, and the other schools were there already that they would push through,” said Senecal, Susquehanna’s second-year coach. “While they were disappointed, I can’t really say they were surprised.”

The return trek to Selinsgrove seemed like it would never end.

“It was a seven-hour trip,” Arbogast said. “It was real quiet.”

“It obviously was (disappointing), but just knowing I was there was a good feeling,” Petraskie added.

Arbogast qualified for the D-III Indoor Championships — she was seeded 18th — by popping a 38-1½ at SU’s River Hawk Opener in early December.

Petraskie landed his invitation to nationals after pocketing a school-record 4,893 points earlier this month at the All-Atlantic Region Track and Field meet in Rochester, N.Y., less than a week before the NCAA D-III Championships were set to begin.

Petraskie actually set personal bests in five events — the 60, 60 hurdles, 1,000, pole vault and shot put — in the second heptathlon he entered this season.

“I just went into it with a good mindset,” said Petraskie, who was named the Landmark Conference’s Indoor Field Athlete of the Year for the fourth straight season after claiming titles in the high jump and long jump — and finishing second in the triple jump. “That was the biggest thing — my mindset. Just knowing I could do it. I really practiced all of those events pretty thoroughly throughout the last two years.

“I just went into it with a bunch of confidence knowing I could potentially make nationals. I just had to do my best in each event,” added Petraskie, whose Susquehanna indoor career featured 13 all-Landmark Conference honors — including 10 individual championships.

“I had never really thought I’d do that. I’d seen other schools, like the multis and stuff, and I thought I could probably do it. I didn’t know how well I could do it. It’s a surprise. I didn’t really expect it to flourish into what it did, I guess.”

While Petraskie was just hours from competing at the NCAA’s Indoor Championship meet, unfortunately he never had the chance to compete.

“This was just his first year training full-time for the heptathlon,” said Senecal, a former decathlete during his competitive days at Brockport (N.Y.) State. “Obviously, the results showed that it was a great fit for him.”

Arbogast also has made a transition since Senecal and Bemis arrived, as she’s running shorter sprints such as the 60, 100 and 200 that have resulted in greater explosion in her jumps. An altered weight-training program also has made an impact.

Arbogast spent three weeks in January on an international business internship in Singapore and was on one of the last planes out of Hong Kong before the airport there was closed as the coronavirus numbers continued to expand.

Since Susquehanna extended its spring break and canceled classes, Arbogast has been at home since returning from Winston-Salem while Petraskie is back in Shamokin. Both are on hold as they await the start of online classes Monday.

“That’s gonna be wild,” said Petraskie, a computer science major with a math minor who is on target to graduate this spring with his degree.