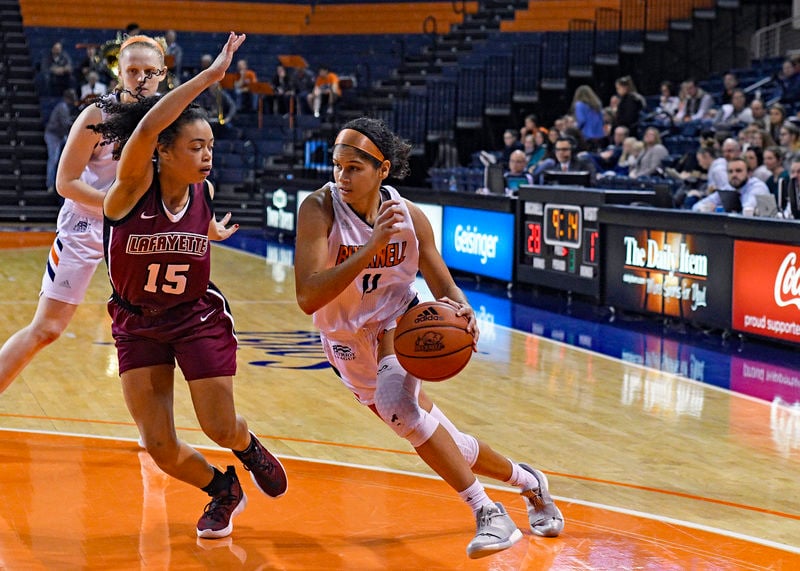 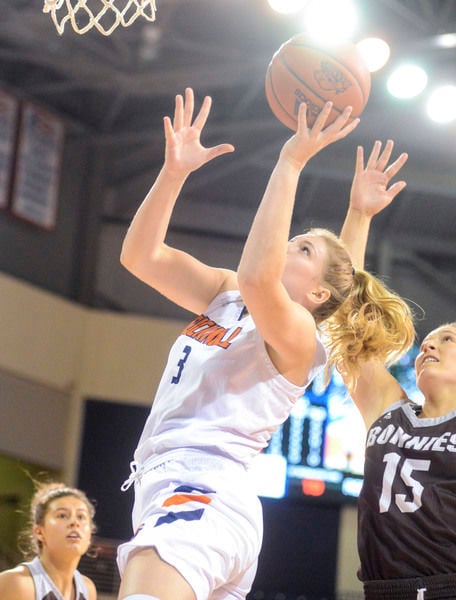 Bucknell’s Tessa Brugler shoots after going past St. Bonaventure’s Emily Calabrese during a game earlier this season at Sojka Pavilion in Lewisburg.

Bucknell’s Tessa Brugler shoots after going past St. Bonaventure’s Emily Calabrese during a game earlier this season at Sojka Pavilion in Lewisburg.

A couple of big questions surrounded the Bucknell women’s basketball team as it prepared to open the season.

How would the Bison replace the production of the winningest team in Patriot League history, fronted by three 1,000-point scorers in Kate Walker, Kaitlyn Slagus and Kyi English? How would Bucknell play under first-year coach Trevor Woodruff, who replaced the winningest-coach in program history, Aaron Roussell?

Through approximately half of the season, and one-third of the Patriot League slate, Bucknell (13-4, 6-0) has answered those questions with win after win.

“We pick each other up,” Bucknell sophomore Taylor O’Brien said. “We hold each other accountable. We don’t let our downfalls get to us. Our teammates pick us up. We’re together all the time.

Bison senior Ellie Mack and junior Abby Kapp, the top two returning scorers, have both increased their scoring by about a bucket per game. Junior Ally Johnson has doubled her scoring output to 8.5 points per game. The biggest increase has come from junior Tessa Brugler.

Brugler is averaging 10.2 ppg. while shooting better than 51% percent from the field, good for fifth in the Patriot League. She has scored 173 points so far, after combining for 80 points in her first two seasons.

“My teammates are finding me and giving me good opportunities to score,” Brugler said. “We’re working inside-out, which has been really good for us. In practice, we’re been pushing each other hard. I’ve been going against Emma Shaffer, and she’s a big body to play against. She’s a really tough competitor.”

Brugler said her increased production was a combination of work she put in during the offseason and having more opportunities.

“I worked hard this summer,” she said. “I knew there were big roles that needed to be replaced with the graduated players, especially Kaitlyn Slagus at the post spot. I knew how I needed to prepare for that. I had a lot of conversations with her about what she did to improve her game, and how she played.”

Bucknell is coming off a 71-50 win over Lehigh on Saturday. Lehigh was the preseason favorite to win the league, and was the only undefeated team beside Bucknell after five conference games.

“Our approach is to play every game like it’s the championship game,” Woodruff said.

“Everyone is starting to flow,” O’Brien said. “People are stepping up in times of need. Everyone is doing what we need to do to win. All of our players are working well together.”

Bucknell had another question arise after last week’s win over Holy Cross. Starting point guard Marly Walls scored a career-high 13 points, but then suffered a serious knee injury. She tore her ACL and MCL, and will be out for the season.

“We can’t make up for Marly, but I think we can hang in there and continue to compete,” Woodruff said. “We would rather have her, that’s for sure.”

The Bison are 2-0 since losing Walls, a sophomore.

“Me and Marly have been best friends since last year,” O’Brien said. “We met and we had this instant spark, instant click. Not having her on the court with me now is very tough. We have other guards who are able to step in. We’re all playing for her. We’re going to win the championship for her.

“She has a different role now. She’s cheering us all on, and we’ve just got to make her proud.”

O’Brien stepped into the starting void, and Johnson moved to starting point guard.

“What AJ is going to have to do is really what AJ has been doing, with a little more responsibility in terms of organization, but that’s about it,” Woodruff said. “It’s really about getting comfortable in new roles.”

Woodruff said the bigger adjustment would come on the wings, as moving Johnson to point guard creates more minutes there.

The Bison admitted there were a lot of changes when Woodruff took over, but at this point in the season the adjustments have been made.

“He is a very tough coach,” O’Brien said. “He wants to win, and he will do anything he can to do that. I think he’s a great coach because he tells like it is, and he’s able to push us in the right direction so we can be successful. He sees so much potential in all of us. I think he does a great job taking his time and explaining the reasons why we do things.”

Woodruff opted to focus on improvement — and on the rest of the season — rather than reflect on how the team has adjusted to him.

“Every day we try to win the day,” Woodruff said. “It’s cliche — it’s coach-speak — but it’s so true. If you get out of your lane ... and you’re concerned about what you did yesterday, you probably didn’t do much today.”