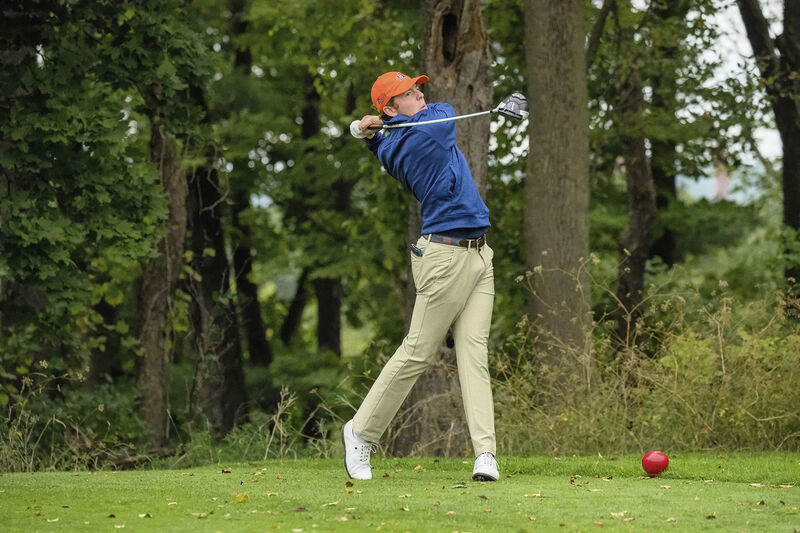 Bucknell freshman Blake Wisdom watches a shot during a match this past season. Wisdom finished in the top half of the 3M Open qualifier Monday. 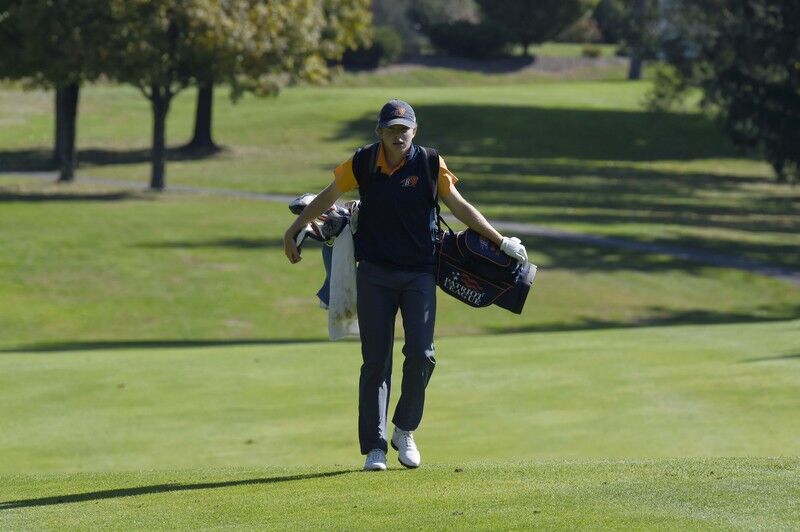 Bucknell freshman Blake Wisdom carries his bag down the fairway during a match last season. Wisdom finished in the top half of the 3M Open qualifier Monday.

Bucknell freshman Blake Wisdom watches a shot during a match this past season. Wisdom finished in the top half of the 3M Open qualifier Monday.

Bucknell freshman Blake Wisdom carries his bag down the fairway during a match last season. Wisdom finished in the top half of the 3M Open qualifier Monday.

Blake Wisdom began his Bucknell golf career in stellar fashion last fall. The Wisconsin native tied for second on the team with a 73.5 scoring average.

“I have a gut feeling he’s going to do some really good stuff.”

Wisdom followed his strong debut with a school-record-tying 6-under par round in his first tournament of the spring. However, the Bison competed in only two spring tournaments before the season was ended early due to the coronavirus pandemic.

“Obviously it was tough,” Wisdom said. “I’m from Wisconsin, so I went home and the weather wasn’t great. I didn’t have much to do except for (online) school and play golf.”

Wisdom didn’t want to waste the strides he made during his first collegiate season, so he found a way to keep playing during the pandemic.

“I would drive 45 minutes to my swing coach’s house, and he had a setup in his garage where I could drive and hit balls,” Wisdom said. “I did that every day. I found a way to get through it and keep working on my game.”

Wisdom finally returned to competitive golf in June, when he competed in the Wisconsin Match Play Championship.

“It was great to get back on the course, especially after the first two (college) events in the spring,” Wisdom said. “The whole team had a shot of playing well and making a run at the conference title.

“I was happy to be playing after four months off.”

“It was good,” Wisdom said. “I played well that whole week, and I made the match play. I lost to the guy who ended up winning the whole thing. The guy I lost to didn’t miss a putt, so there really wasn’t much I could have done.”

After playing in some smaller tournaments, Wisdom took a shot at competing against professionals. Last week he placed 19th at a pre-qualifier to reach Monday’s qualifier for the PGA Tour’s 3M Open, which began Thursday.

“Those guys are all trying to make it on the tour,” Wisdom said. “They’re traveling the country every week.

“It was super-cool to play in, but I could have played better, for sure. It was definitely a great experience. I played with some really good guys who played at big schools.”

Wisdom shot 1-under par 70 to place 27th in a field of 60 at the qualifier. The top two golfers, who both shot 8-under, advanced to the 3M Open.

“When there are only two spots available for a PGA event, the odds are against everybody,” Binney said. “(Wisdom) finished in the top half of what was basically a pro event. He was one of only a handful of amateurs, and he made a good showing.”

Wisdom said his performance in the qualifier helped build his confidence.

“It let me know I can hang with those guys, which is cool,” he said.

Binney said his rising sophomore doesn’t suffer from a lack of confidence.

“There are two different types of really good players,” Binney said. “You have flatliners, who stay calm under pressure regardless of what is going on. That’s Chris (Tanabe), my rising senior. Then you have guys who thrive under pressure and get pumped up and energized, like a football or basketball player. That’s Blake.

“He’s very energetic. He’s not afraid of taking his game and competing with anybody. He’s fearless. He never backs down, and he has the utmost confidence in his game.”

Wisdom admitted he wasn’t planning to play in the qualifier until the pandemic scrambled his original plans.

“I was just trying to find tournaments to play in,” Wisdom said. “So many tournaments I was planning to play in were canceled due to COVID. I knew the 3M Open was going to happen, so I figured, ‘Why not?’”

Wisdom and the rest of the Bison won’t play golf for the school team for nearly a year since the upcoming fall season was canceled by the Patriot League.

“It sucks, but I think it was expected,” Wisdom said. “One good thing is we’ll be able to get to school, settle in and then come together as a team to keep getting better. I think some teams are going to relax and some are going to try to get better during this offseason. We have a good group of guys who work hard.

“Hopefully we’ll have a spring season, and I think we have a good shot to win the Patriot League.”

Binney said he was hopeful the Bison would compete for the league and national titles in the spring, but noted the team would miss a lot of tournament experience during the fall.

“It’s disappointing for the guys, especially after losing two-thirds of the spring season,” Binney said. “We only played two tournaments before they canceled the spring season. Then the entire fall is lost. It’s tough for the juniors and seniors, especially, to lose a whole year.”

The good news for the Bison is that Bucknell has everything they need in Lewisburg.

“We’re going to concentrate on intrasquad work,” Binney said. “We can’t travel or leave campus, but thankfully we have a course on campus and a practice facility.”

The coach said the team wasn’t just going to go out and play rounds. He was considering various ideas, including match play and competition against some golfers who play for Bucknell’s club team.

“We’ve got to come up with creative ways to keep the guys engaged and sharp,” Binney said. “We’ll figure it out.”