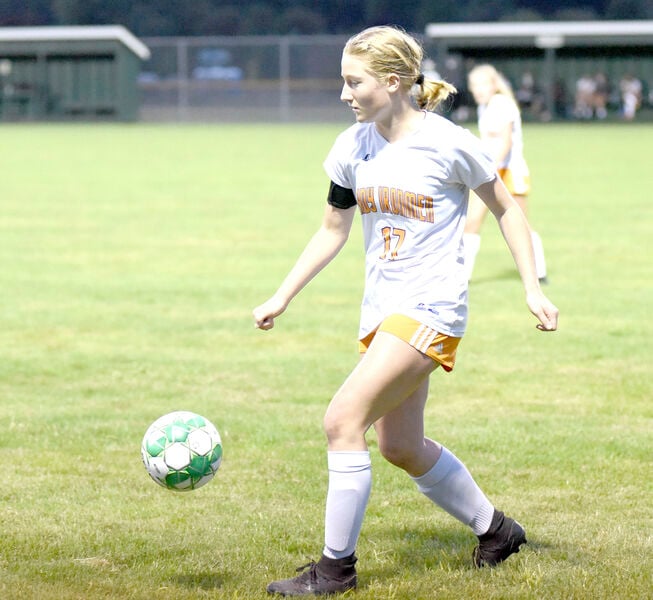 Danville’s Kendall Thompson moves the ball past midfield during a girls soccer game against Hughesville on Wednesday. 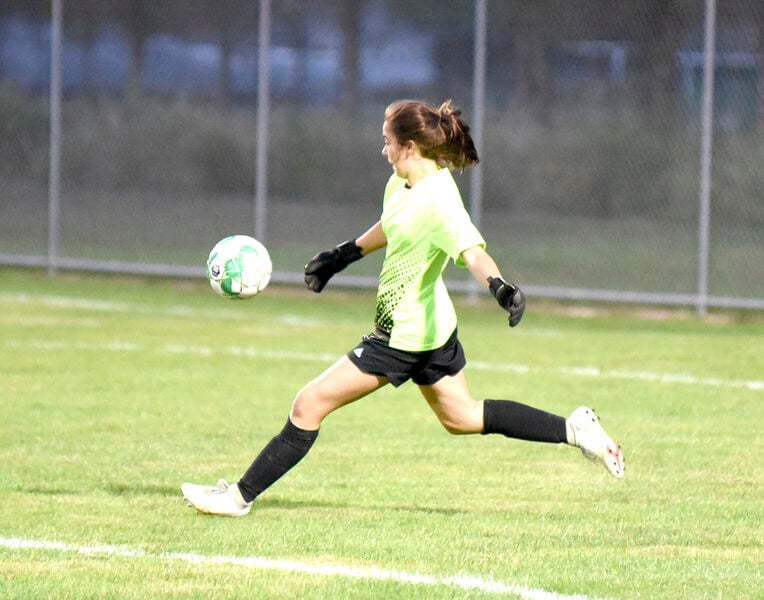 Danville goalkeeper Grace Everett punts the ball during a girls soccer game against Hughesville on Wednesday. Everett made eight saves in a 1-0 loss.

Danville’s Kendall Thompson moves the ball past midfield during a girls soccer game against Hughesville on Wednesday.

Danville goalkeeper Grace Everett punts the ball during a girls soccer game against Hughesville on Wednesday. Everett made eight saves in a 1-0 loss.

HUGHESVILLE — Danville goalkeeper Grace Everett withstood a barrage of shots in the first half, but the Ironmen couldn’t get much going at the other end.

Hughesville got a goal from Kenna Ammar-Khodja early in the second half for the game’s only goal, as the Spartans defeated Danville 1-0 in Heartland Athletic Conference-Division II girls soccer.

“She played phenomenal,” Danville coach Dave Tumolo said. “We had a very thin bench, and we did good playing as a unit. Grace was phenomenal in goal.”

Everett stopped eight of the nine attempts Hughesville was able to put directly on goal. The one that slipped by was a high shot from just inside the 18 by Ammar-Khodja, who accounted for three of the shots on goal for the Spartans.

“After our coaches talked to us at halftime, we knew we needed to come out strong,” Ammar-Khodja said. “As a leader on the team, it was nice to get one and show the girls we need to get to this level. It was awesome.”

Hughesville controlled the tempo of the game in the opening half. The Spartans challenged Everett throughout the opening 40 minutes, attacking from the wings and pushing the ball to the center.

“I was very happy to see us finally put one in the back of the net when we did,” Hughesville coach Alecia Gold said. “It was huge. We’ve been focusing a lot on keeping balls on the ground and hitting feet. The girls have done a really good job with it.”

Near the 18-minute mark of the first half Hughesville nearly cashed in when Madilyn Paulhamus collected a feed in front of a wide-open goal. The shot sailed high over the goal as the attempt went over the crossbar, nearly every other good shot for the Spartans was stopped by Everett.

Danville is dealing with the loss of two key players — one being the starting keeper — due to contact tracing from a positive coronavirus case at the high school.

The Ironmen, who did not have a shot on goal, had their best chance to score when Chloe Hoffman put a shot over the crossbar. Hoffman also stopped a shot on goal when she headed a ball away in the second half.

Madison Sauers prevented Hughesville from extending its lead in the second half when she headed a ball away from the post. Everett made a stop on the initial attempt, and Sauers were there to prevent any damage off the rebound.