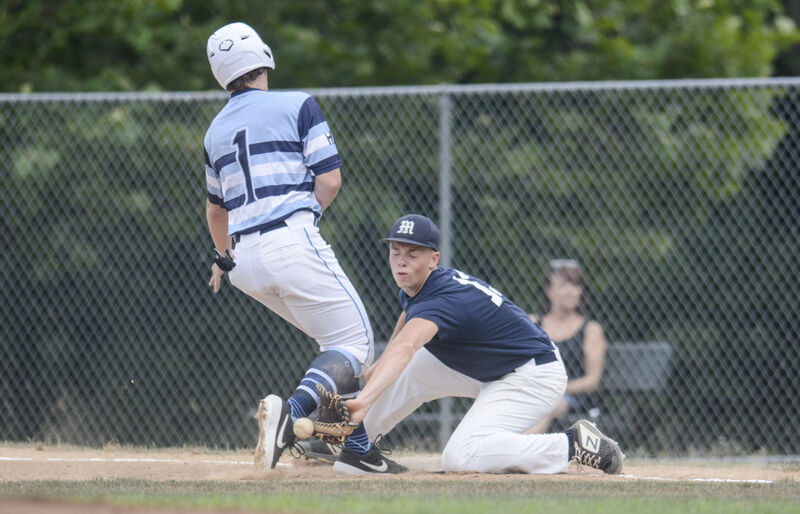 The Mifflinburg Outlaws’ Cade Davis dashes safely back to first base before the Mifflinburg Kats’ Ethan Hoy can come up with the ball on a pickoff attempt during Tuesday’s North Branch League game. 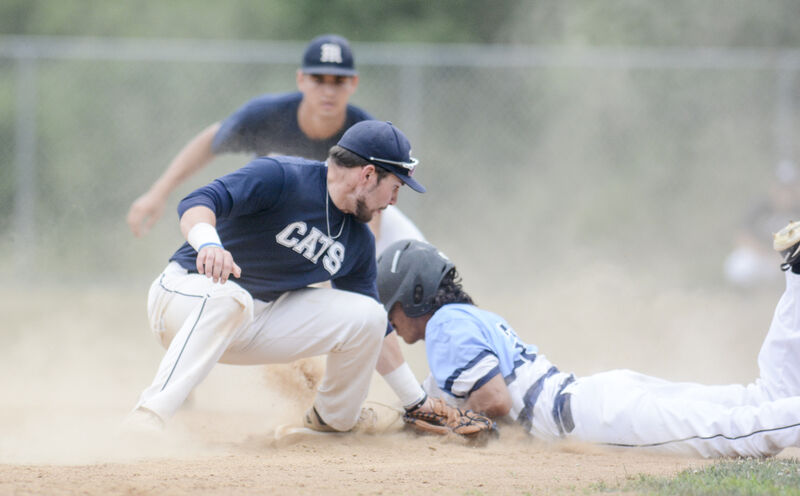 Mifflinburg Kats second baseman Reed Wagner can’t get the tag down in time on the Mifflinburg Outlaws’ Dylan Harris at second base during Tuesday’s North Branch League game. 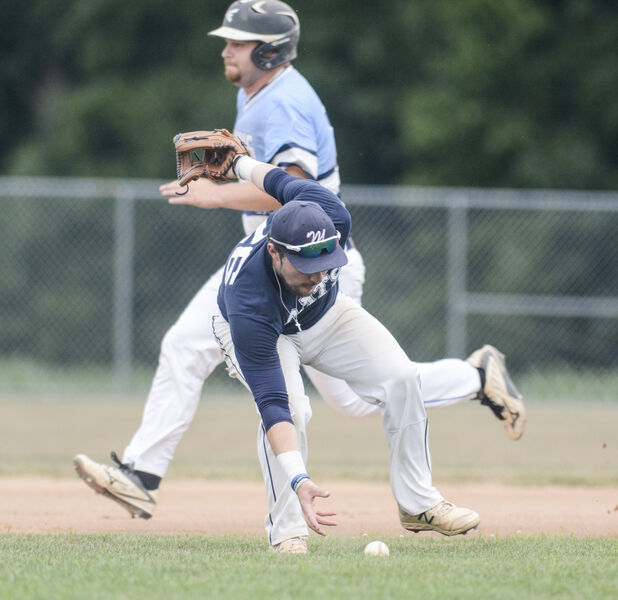 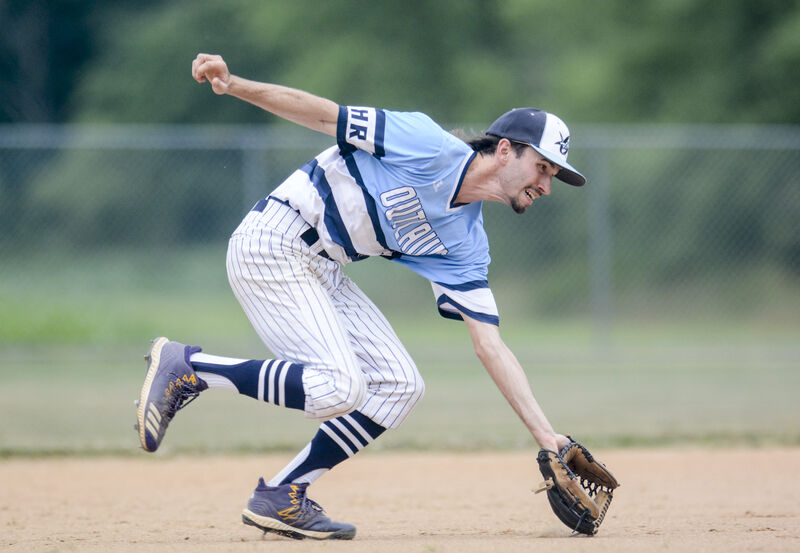 The Mifflinburg Outlaws’ Cade Davis dashes safely back to first base before the Mifflinburg Kats’ Ethan Hoy can come up with the ball on a pickoff attempt during Tuesday’s North Branch League game.

Mifflinburg Kats second baseman Reed Wagner can’t get the tag down in time on the Mifflinburg Outlaws’ Dylan Harris at second base during Tuesday’s North Branch League game.

Hoover — a Lewisburg graduate — had tussled with many of the Kats, comprised of several of the players who lost their chance to defend Mifflinburg’s Division II State Legion title due to the coronavirus pandemic

“I’ve pitched well against these guys,” Hoover said. “I like pitching against them. I have experience against them, and I know how to pitch them.”

Hoover pitched five shutout innings before needing help out of the jam in the sixth inning. Luke Zeisloft delivered a three-run homer in the fourth inning as the Outlaws knocked off the Kats, 7-3.

Hoover retired the side in order, but the Kats had two hard-hit balls to the fence in the opening inning. That was pretty much all of the loud contact Hoover allowed through the first five innings, scattering three singles.

Meanwhile, Hoover’s teammates staked him to a 5-0 lead. Dakotah Snyder led off the game with a single, moved to second on a wild pitch and scored on a Cade Davis single for a 1-0 lead. Kats starter Anthony Bennage got a double play and a fly out to escape further damage in the first.

Bennage settled in, allowing just an unearned run on Davis’ sacrifice fly in the third inning. He was helped by some nifty defense, including Michael Warren reaching over the fence in foul territory and flipping a pop foul back into play with his glove, before catching it for the first out of the second inning.

The Outlaws (9-8) broke open the game in the fourth inning. After an out and a walk to Oakley Whitesel, Bennage recorded a strikeout. Ben Eshelman followed with a double to the right-field fence to put runners on second and third.

That brought Zeisloft — a rising junior from Central Columbia High School — to the plate. He worked the count to 3-2, laying off some tough pitches from Bennage that just missed the inside corner.

Zeisloft finally got the fastball he was looking for and deposited it over the left-field fence to give the Outlaws a 5-0 advantage.

“I was looking for a fastball out of his hand, figuring I could adjust to a curveball,” Zeisloft said. “It was fastball.”

The Outlaws added a run in the fifth on Austin Davis’ RBI groundout, and Hoover added a solo homer in the top of the sixth to make it 7-0.

The Kats finally got to Hoover in the bottom of the sixth. Michael Warren walked and scored on Darrin Miller’s two-run homer. The Kats got two more runners on in the inning, but Brian Jordan came on in relief to get a strikeout to end the threat.

Reed Wagner added a solo homer for the Kats in the bottom of the seventh.

The teams meet again on Thursdayat New Berlin, and the North Branch League will begin its playoffs on Saturday. The bracket will be determined after Thursday’s games.