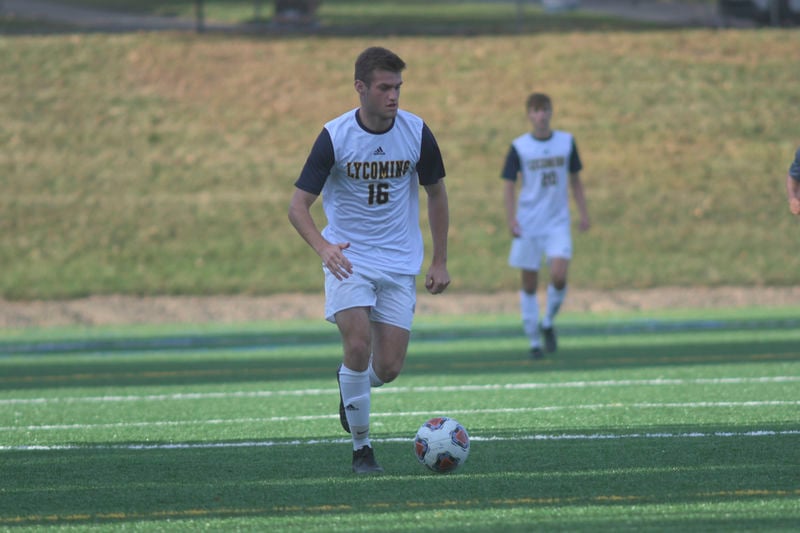 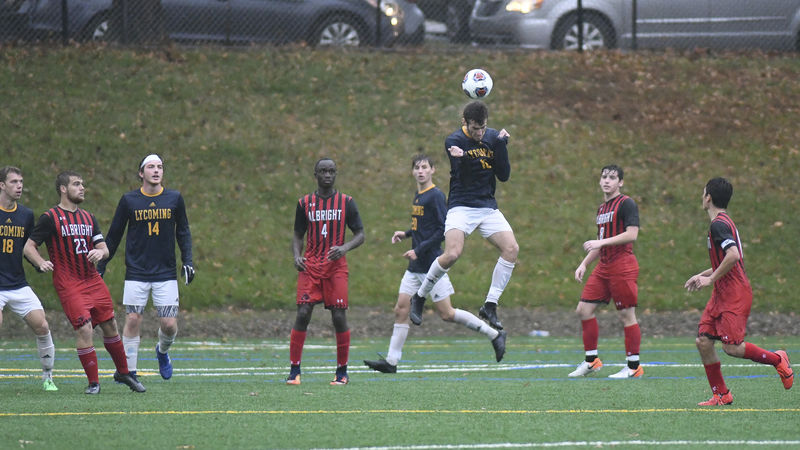 Lycoming freshman Mason Novobilski, a Mifflinburg graduate, heads a ball during a game against Albright last year. The former all-state player is training for his sophomore college season.

Lycoming freshman Mason Novobilski, a Mifflinburg graduate, heads a ball during a game against Albright last year. The former all-state player is training for his sophomore college season.

“It was a little bit of a rough start,” said Novobilski, a Mifflinburg graduate. “Right before the first scrimmage, I got a concussion. Then, when I was starting to get back in the feel of things, I got a really bad calf strain.

“Overall the coaching is great, my teammates are great, and their style really fit my style. I loved playing there and I can’t wait to get back for next season.”

Novobilski appeared in 14 of the Warriors’ 20 games, and recorded an assist in a 2-0 win over Albright.

“Mason actually had a really good preseason and, at the end of preseason, got a concussion,” Lycoming coach Nate Gibboney said. “So he missed a couple weeks of the season as well that really set him back. He probably would have played a lot more than he did this year if he hadn’t gotten injured.”

Gibboney said he was excited to get Novobilski on campus after he was a first-team all-state midfielder as a senior. Novobilski scored 49 goals combined over his junior and senior seasons at Mifflinburg.

“We eventually settled on him playing an attacking center midfield role,” Gibboney said. “That’s where we played him at the start and he picked it up very quickly in preseason and was all set to probably log really good minutes — not as a starter, but probably one of our first guys off the bench.”

The injuries changed that.

“Everyone has a mindset and vision of what they want to be,” Novobilski said. “I had a vision and didn’t live up to it because of the injury problems. That’s where the disappointment came in.”

In the sixth game of the season, after he returned from the cconcussion, Novobilski and the Warriors faced Swarthmore, which went on to reach the NCAA Division III Sweet 16.

“He actually scored a goal that would have had us up 1-0,” Gibboney said. “He actually headed it off the crossbar and it went down into the goal. Then the goalkeeper ran back and swatted it out after it went in, and the linesman wasn’t in position to call it. He put himself into some great spots and was doing some good things, but the opportunities he got were limited because the injury he got really set him back.”

Novobilski added: “It was a shame. I saw the ball cross the line, but the person who mattered most didn’t see it. ... Swarthmore was probably my best personal showing. That game I felt like I was starting to hit another level in college. I was starting to really click and fully understand how the team operates.”

Novobilski’s calf strain came shortly after that game, which limited him for the remainder of the season. He started to work for next season when he was fully recovered from that injury.

“He was making massive gains with agility, speed, strength in the weight room,” Gibboney said. “We just got a full-time strength coach and you could tell Mason was loving what was going on there. He and our strength coach became real good buddies, and he was making massive gains all over the place. Certainly, we expect him to come in and have a major role in the future of the program over the next three years.”

Novobilski said strength was the area he needed to improve most. He said while the speed of the college game was faster than in high school, the biggest difference he noticed was the strength of opponents. The new strength coach has been a real benefit for Novobilski.

“He’s blown me away,” Novobilski said. “What he does to transform everyone through lifting and conditioning is incredible.

“Even now, I’ve been training two times a day to gain the extra muscles I’ve been lacking. I’m fortunate to have the tools that are needed for me to keep improving heading into the season.”

Novobilski is expected to return to the midfield, though that will depend on preseason work.

“You can never have enough goal scorers, and he’s clearly one of our best natural goal scorers,” Gibboney said. “Anyone around the goal with the ball at his foot, he’s definitely a guy you want in that situation.

“I would anticipate more of that, but ... I wouldn’t be surprised to see him move back or even move up. Time will tell.”

Novobilski said he and Gibboney have had conversations about his position next season.

“I feel most comfortable in the midfield,” Novobilski said, “but wherever he needs me, I’ll do my best to get the job done.”

Novobilski and the Warriors are just hoping for a healthy sophomore season.