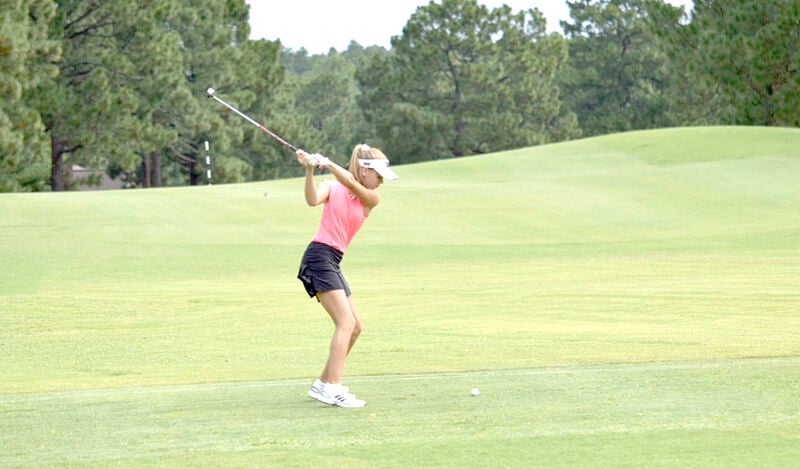 Hannah Rabb gets ready to hit a shot during a recent round. 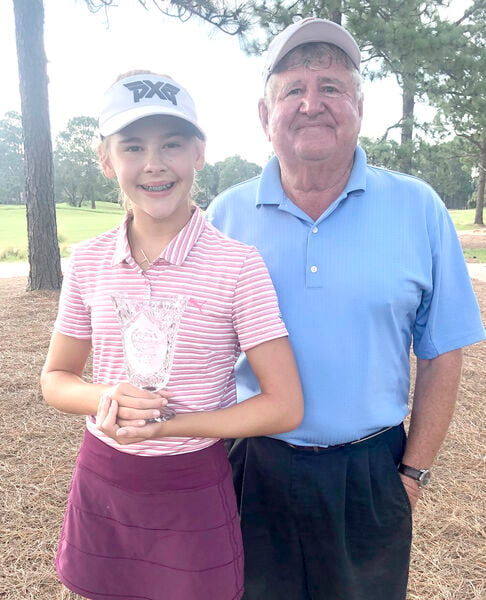 Hannah Rabb gets ready to hit a shot during a recent round.

Hannah Rabb knew she couldn’t let a bogey get her down.

Rabb, who will be a freshman at Warrior Run when school starts, bogeyed the 12th hole Saturday at Longleaf Golf & Family Club in Pinehurst, North Carolina, putting her 4-over par after 48 holes of the three-day, 54-hole U.S. Kids Golf Teen World Championships.

Rabb eagled No. 14 and birdied No. 16 to finish the tournament at 1-over par, good for fifth out of 53 competitors in the Girls 13 category.

“Usually I do good one day and mediocre the other two, but this time I did well in all three rounds,” Rabb said. “I was super excited because my goal was top 10, and I achieved that by five places.”

On the first two days of the tournament, Rabb parred No. 14. On Saturday, she said she hit a good, straight drive to within 165 yards. Her second shot was a 5-iron hybrid that she hit onto the green.

“I had a downhill putt that broke about a foot. I hit it a little too hard, but it hit the pin and went in,” Rabb said. “There were some older people watching from their house, and they said it was the best shot that they saw all day.

“That was a plus to my round. I wasn’t making too many putts, so I was excited, but stayed focused.”

Rabb finished off her round with three pars and a birdie to claim fifth place.

“I’m very happy for her,” said Laura Tyler, who has been giving Rabb lessons since she was 6 years old. “She’s been playing very well and working very hard. I wasn’t surprised because she has that ability. ... I knew it was just a matter of time until she put three good days together.”

Rabb, who attended Meadowbrook Christian through eighth grade, said she had been competing at the U.S. Kids Golf World Championships since she was 9.

“I knew what to expect, but this was my first time at Teen Worlds, so it was a little different,” Rabb said.

Rabb shot a 3-over par 75 on the first day, but followed that with back-to-back rounds of 71, good for 1-under par.

“There’s not live scoring, so after every round everyone waits to see the scores,” Rabb said. “You want to shoot well, so you get a green arrow pointing up; a red arrow pointing down is bad.”

Rabb got into golf after her father and grandfather took her to an LPGA Tour event in New Jersey when she was 5 or 6 years old. She said she had fun, and asked to get a lesson. She’s been working with Tyler ever since.

“She’s a very good student,” Tyler said. “She listens, and she’s very receptive to coaching. Another thing is her parents keep her very grounded. She does a lot of things other than play golf.”

Rabb said she has a lesson or two with Tyler every week, and then plays in addition to that. She said she plays at least three times most weeks.

“It’s really fun,” Rabb said. “I like that it’s an individual sport and it’s all on me. I like the people that I meet along the way. I have a lot of golf friends.”

Rabb is next planning to compete in the Pennsylvania Women’s Amateur next week, but her first high school season is also fast approaching.

“I’m excited because I’ll get to play against boys and girls,” Rabb said. “I’m also excited for a new experience, because I’ve only really golfed by myself. I haven’t played on a team before.”

Warrior Run golf coach Brad Peace said he was excited for Rabb to join the Defenders.

“Obviously, I’m looking forward to getting the chance to watch her continue to improve,” Peace said. “She appears to be incredibly talented. I also know that she works hard at her game.”

Tyler said she expects Rabb to do well when she starts high school play.

“I think the boys better watch out because Hannah is going to beat them,” Tyler said. “She’s played enough competition that this won’t be any different. I think playing boys and older kids will give her more drive. I think she’ll be very competitive.”