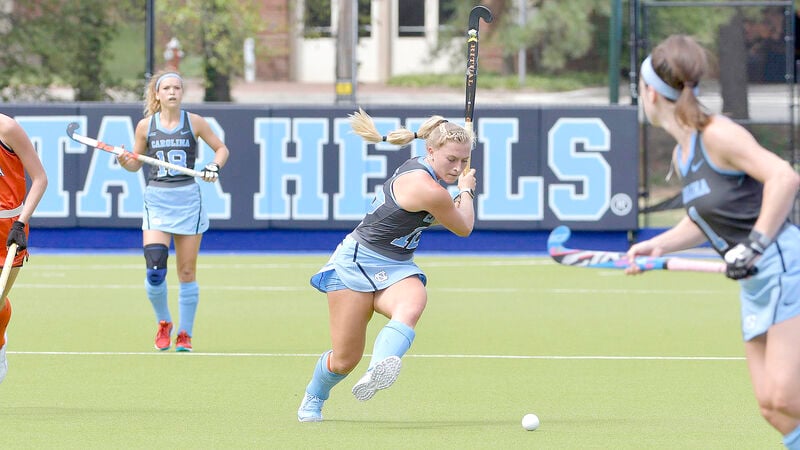 North Carolina’s Cassie Sumfest, a Lewisburg graduate, passes the ball during a 2018 game against Virginia. 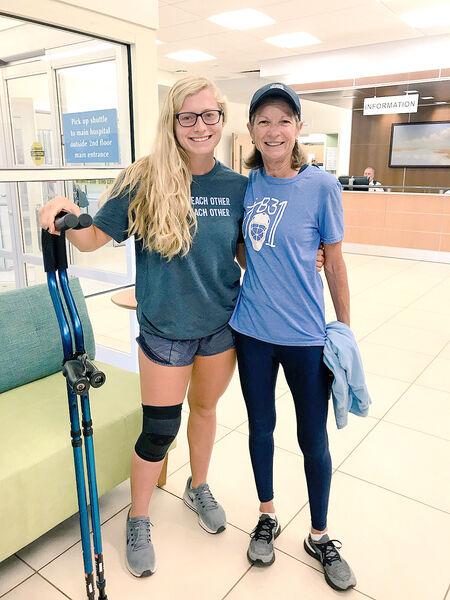 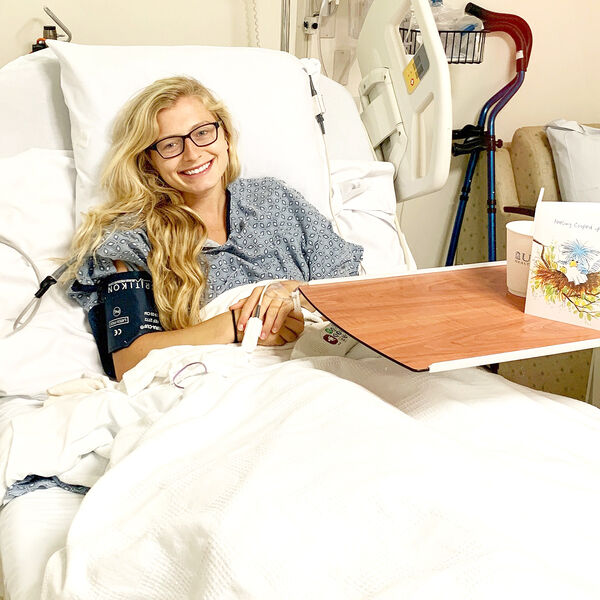 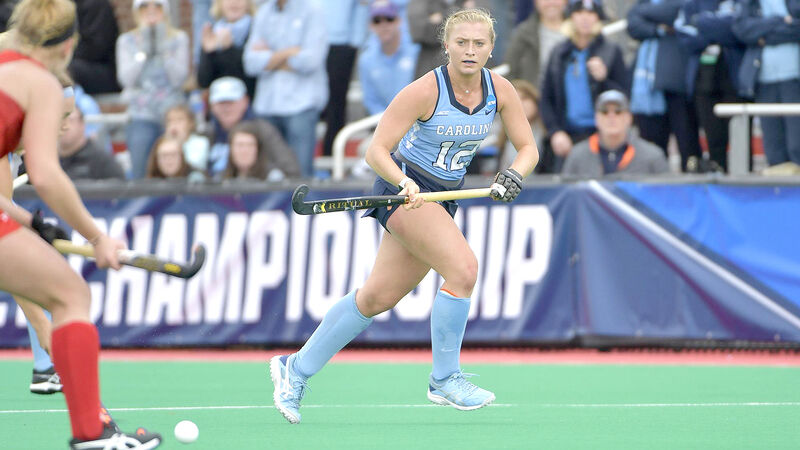 North Carolina’s Cassie Sumfest, a Lewisburg graduate, runs to get in position during the Tar Heels’ win over Maryland in the 2018 national championship game. Sumfest missed all of the 2019 season after tearing her ACL. 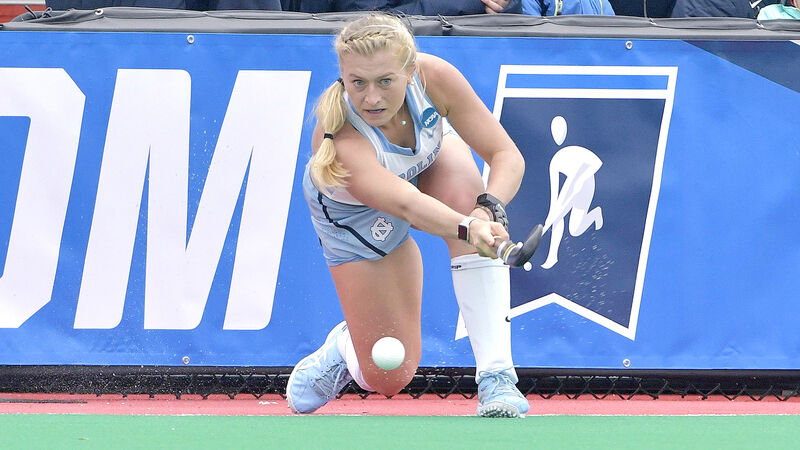 North Carolina’s Cassie Sumfest, a Lewisburg graduate, inserts a corner during a 2018 national semifinal against Wake Forest. Sumfest missed all of the 2019 season after tearing her ACL.

North Carolina’s Cassie Sumfest, a Lewisburg graduate, passes the ball during a 2018 game against Virginia.

North Carolina’s Cassie Sumfest, a Lewisburg graduate, runs to get in position during the Tar Heels’ win over Maryland in the 2018 national championship game. Sumfest missed all of the 2019 season after tearing her ACL.

North Carolina’s Cassie Sumfest, a Lewisburg graduate, inserts a corner during a 2018 national semifinal against Wake Forest. Sumfest missed all of the 2019 season after tearing her ACL.

Perhaps the most difficult aspect of Cassie Sumfest’s arduous recovery from knee surgery was convincing her parents she was A-OK.

See, there was this event in California — a tryout for Sumfest to maintain her standing in the USA Field Hockey system — and the Lewisburg graduate really wanted to go, even though she was only about nine months removed from tearing her right ACL. She pleaded for her parents’ blessing, but Joel and Virginia weren’t certain their youngest daughter had fully healed from her first significant sports injury.

“As parents, we really didn’t want her to go,” said Virginia Sumfest. “We were fearful that it was too soon and that she could get re-injured.”

It’s not like the Sumfests had concerns about a teen attending some concert in the big city. They watched Cassie work hard to rehabilitate her knee last fall while her University of North Carolina team won a national championship with its second consecutive perfect season. They didn’t want her pushing herself too hard and possibly missing another year of college competition. Or worse, suffering an injury potentially ruinous to her future quality of life.

Cassie presented a strong case, too.

She spent many years in the USA Field Hockey program, rising through the ranks toward a coveted spot on the U.S. Women’s National Team. She was a member of the U.S. Under-21 squad in both 2018 and 2019, which coincided with her first two years as a UNC starting back, but she was due to age-out of that program this year. She saw the February trip to Berkeley — and the chance for a spot on the recently revived U.S. Women’s National Development Team — as “my one shot at getting my name back out there and into the USA pipeline.”

“It took a lot of convincing, but I felt 100% and I had my (college) trainers backing me,” Cassie Sumfest said. “My parents had a fear of me doing it again, so it was a ‘no’ for me going. It took a lot from me to get them to agree. Like, ‘OK, fine! Go, but be smart. Please don’t do anything unsafe.’”

Cassie passed the trial with flying colors, earning a spot on the national development team. Though she missed an international tour in Scotland — the April event was scuttled by coronavirus concerns — Cassie confidently returned to Chapel Hill, N.C., to work toward an NCAA championship three-peat.

“I honestly think (the injury) made me a lot stronger, mentally,” she said. “Throughout this whole journey, I became stronger physically and mentally. The grind of pushing myself past my comfort zone was huge in my recovery.”

Cassie Sumfest laid on the turf facing the stands where she saw several fans holding their heads in dismay.

Moments earlier, as she prepared to receive a pass from a teammate, she hopped over the ball that headed toward her feet. As she landed and tried to plant her right foot for a quick transfer, her knee gave out and she fell to the field.

“It felt like it was happening in slow motion. I didn’t hear a pop, but I felt it bend and something snap as I was going down,” she said. “It’s not often you see people react that way when someone falls. That’s when I realized the severity of it.”

Sumfest admitted her legs were fatigued from the Tar Heels’ two-week series of 2019 spring scrimmages, saying, “I wasn’t my own advocate.”

“Being so competitive, I don’t want to take a day off,” she said. “If we have a practice, I want to be there. I had been going 100 mph for two weeks, and I didn’t hold myself out.”

Cassie had hope it was just a knee sprain after walking off the field and performing simple movements in the trainer’s room. However, she was unable to jump out of a squat which was a red flag later confirmed by MRI: she had an avulsion — her ACL had torn away from the thigh bone — while her MCL and LCL were sprained. Her knee was so unstable that she was required to rehabilitate it for three weeks prior to surgery, improving its strength and range of motion while controlling the swelling before the procedure.

“It was devastating to say the least,” said Virginia Sumfest.

A week after her accident, as UNC prepared to scrimmage Iowa, Cassie hobbled on crutches to chat with Hawkeyes assistant coach Roz Ellis, a former Lewisburg alum and college All-American. The emotional conversation with a familiar face, who herself excelled following a torn ACL, was a significant step in her recovery process.

“She was super-supportive and reassuring,” Cassie said. “Talking to her honestly helped me a lot.”

“(Ellis) was so encouraging,” said Virginia Sumfest, “explaining to Cassie that with her determination and drive that she was going to come back even stronger than she was before.”

The whiteboard in Cassie’s room was typical of a college student.

The goals scrawled on it? Not so much.

“It was something that I looked forward to crossing off,” she said. “I look back now, and it’s like, ‘Wow!’ I remember thinking, ‘Five months ago I couldn’t walk.’

“At the time it was very frustrating because I like to go, go, go. (Recovery) made me take things slow and focus on the little things.”

Ali Rushton, a fifth-year senior at the time, was Cassie’s partner in rehabilitation. An Episcopal Academy graduate from Media, Rushton suffered her second ACL injury a month earlier than Cassie, and her laser-focus on returning for the 2019 season was an inspiration.

“She was able to get into games for a minute or two, which was a huge deal at six months when (recovery is) usually a 10-month timeline,” said Cassie. “I cried because I was so happy for her. That helped me a lot because it showed me it was possible. I just needed to have confidence.”

Cassie’s rehabilitation took her from the hospital to the rehab room to the swimming pool to the playing turf, all the while adding strength and range of motion in her knee. By December she advanced to cutting on the knee by reacting to a trainer’s cues rather than planning her movement. That was one of her final physical and mental hurdles prior to re-joining the Tar Heels for January workouts. The U.S. development team trial soon after almost served as a reward for a recovery well done.

“Now we are so thankful that we trusted Cassie as (the trial) helped build her confidence that she could play again,” said Virginia Sumfest, “and she made the development team which was very important to her.”

At the time of her injury, Cassie believed she was playing the best field hockey of her career.

“I felt, like, really good,” she said. “I was dreaming of getting moved up (to the U.S. national team) at some point that summer. So getting injured at that time was one of the hardest things. It was kind of like a punch in the gut.”

There were injuries in her past — a patella fracture in youth soccer; a concussion in her sophomore season of high school; a dinged wrist in summer of 2017 — but nothing that kept her off the field for long.

She was an early enrollee at Chapel Hill in 2017, arriving as a four-time all-state first-team honoree from Lewisburg, who played in Belgium, Germany and South Africa with USA Field Hockey. She started every game in her freshman season, which ended in the NCAA semifinals. A year later, she led the 23-0 national champion Tar Heels with four defensive saves, in addition to scoring three goals.

Last season, UNC ran its winning streak to 46 games and won the program’s eighth national title with Sumfest cheering from the bench.

“I would say part of me definitely had trouble watching the team play, but most of me was so happy to see essentially my best friends succeed,” she said. “They were focused on doing their best and improving, and I knew I needed to do the same. I wanted to get back at 110%, hop back in like I didn’t miss a beat and compete for my position.”

Despite COVID-19 concerns, which curtailed spring field hockey, Cassie spent much of the summer at school working out with teammates. Though the NCAA cancelled fall championships with an eye on playing in the spring, the Atlantic Coast Conference is planning a short, six-game season as well as a postseason tournament that will qualify the winner for any NCAA Tournament held in spring.

“This whole summer I’ve been dead-set on having a fall season,” she said. “It was like, ‘I don’t care! I’m training for this!’ So having a mini-season is kind of like a blessing for us.”

Cassie has two seasons of eligibility remaining thanks to a medical redshirt, and she’s already plotting a course to play in the fall of 2021. USA Field Hockey, including the women’s development squad, is on hiatus due to coronavirus, but Cassie expects the U.S. Women’s National Team to be re-evaluated ahead of next year’s Summer Olympic Games. With typical squad turnover and the possibility of retirements, she may have an opportunity to play in Tokyo — which is a long way from that North Carolina hospital bed.

“Before I got injured, I knew ACL tears were very serious — it was honestly one of my biggest fears,” she said. “But I didn’t understand how much time and effort people put into (rehabilitation). I empathize with people much more now for any injury.

“I’ve looked at athletes at North Carolina, and in general, who have been through ACL tears, and you wouldn’t even guess they had an injury. That kept me going when I had doubts. Now I’m so happy to be playing.”