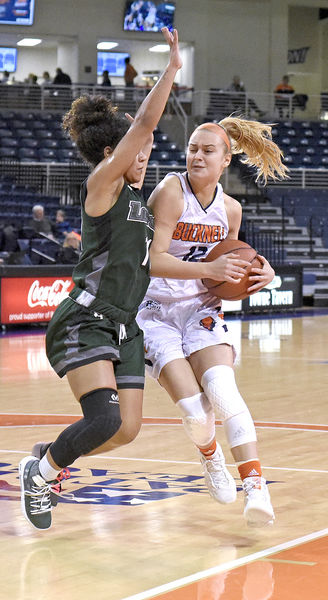 Bucknell’s Marly Walls, right, and her sister have tried Tik-Tok dances to stay busy in the pandemic. 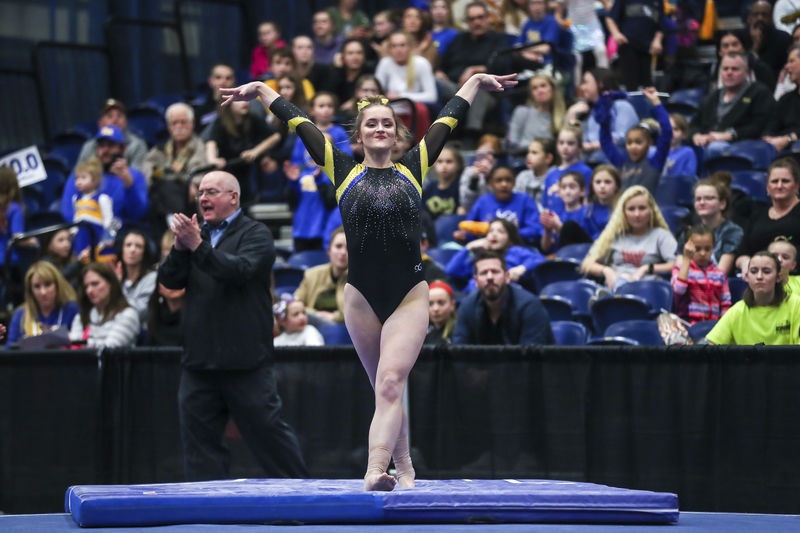 Bucknell’s Marly Walls, right, and her sister have tried Tik-Tok dances to stay busy in the pandemic.

Kylie Robatin posted a short video of herself doing a handstand on Instagram.

For Robatin — a Shikellamy graduate, who is a sophomore on the Pittsburgh gymnastics team — that video served two purposes. First, it was part of her workout as she endeavors to stay in shape during the coronavirus pandemic. Second, the posted video was a way to stay in contact with her team.

"As a team each week, they're sending us at-home workouts," Robatin said. "We're trying to have fun with it by sending a photo to our group chat or posting it on Instagram after we do it. It's a way to stay in shape."

The workouts have taken on a much different look since the gymnasts are at home and have fewer resources than on campus.

"It's different," Robatin said. "Since we can't do gymnastics, it's a lot more general workouts as opposed to what we could in a gym."

Staying in shape with limited resources has been trying for many Valley athletes.

Danville graduate Braeden Eckard, a freshman goalie at Penn College of Technology, has introduced his bowling equipment into several parts of his training regimen. He’ll use one bowling ball to perform Russian twists intended to increase his core strength. He’ll even curl two balls or a pair of stuffed equipment bags.

Bucknell football coach Dave Cecchini said one of the biggest challenges was developing workout plans for players with a wide variety of equipment.

"Workout-wise, it's been pretty unique," Cecchini said. "Coach (Mark) Kulbis, our strength coach, has done of great job of reaching out to the guys and developing custom workouts that can fit what they have. Some guys have full gyms. Some gyms are doing the push-up and sit-up regimen."

Outside of when the student-athletes were taking finals, Cecchini said the team has done a good job of staying connected since the pandemic began.

"Without spring ball, we had (virtual) meetings as if spring ball was still going on," Cecchini said. "We sat down and had meetings to install the offense. We've kept in pretty close contact."

The Bison have met in large groups, as well as smaller position groups. Cecchini said the team was stressing the importance of trying to make the most of this situation.

"We remind the players — and we talk a lot about it as a coaching staff — that everybody is in the same boat and dealing with the same type of adversity," Cecchini said. "Whoever makes the most out of the cards that have been dealt will have an edge. If our guys are doing what they can to become the best football players under these circumstances, that will pay off when football does return."

Staying in contact with her teammates was a must for Warrior Run graduate Megan Zimmerman, a sophomore women's basketball player at Messiah.

"The girls on the team — who have become my best friends — to go from seeing them everyday to being cut off was really hard," Zimmerman said. "I'm thankful we live in a day where we can FaceTime or Zoom to check in. The culture and bond at Messiah, I've found to be special. Staying connected was a must."

Bucknell women's basketball coach Trevor Woodruff has also been taking advantage of technology to stay in contact with his players.

"We have team meetings on a bi-weekly basis," Woodruff said. "Individual conversations on happening on a daily basis. I talk to one, two or three of them per day. So I connect with each kid at least once as a week, and we connect as a team once every two weeks."

The players already have workout plans, so the meetings tend to be less-focused on basketball.

"We want to be there so they know we are here for them in every way," Woodruff said. "We want to support them academically, make sure they're OK emotionally. The conversations are similar to ones with a family member you don't live with, you just make sure they're doing OK."

Bucknell was one of 24 Division I schools to receive 10 or more APR Public Recognition Awards this year, with five of those institutions coming from the Patriot League. Columbia led the nation with 22.

According to the NCAA, the APR provides a real-time look at a team's academic success each semester by tracking the academic progress of each student-athlete. The APR includes eligibility, retention and graduation in the calculation. High-performing teams receiving awards this year posted APR scores ranging from 987 to a perfect 1,000.

Not good at everything

Bucknell sophomore Marly Walls took was the starting point guard on the women's basketball team before a knee injury sidelined her in January.

As a high school athlete, Walls was a finalist for Miss Kentucky Basketball. She scored more than 2,000 points in her high school career. In addition to being a basketball star, Walls was also the Class 2A Female Track and Field Athlete of the Year in Kentucky as a senior, and was all-region as a soccer player. Her older sister, Lakin, played soccer in college at the NAIA level. Walls also has two younger sisters.

Outside of sports, she was a Congressional Art contest winner and had her work displayed in the U.S. Capitol Building.

"That's my biggest hobby outside of sports," Walls said. "I've taken an art class at Bucknell. I started getting into it my sophomore year of high school. I really enjoyed being creative. ... My art teacher pushed me to my limit."

Walls said she had a few scholarship offers for track and field, but didn't pursue it because she knew her future was in basketball. Walls is one of two sophomores on scholarship for the Bucknell women's basketball team, and the other, Taylor O'Brien, also competes for the Bison in track and field.

"I've thought about it," Walls said of joining O'Brien as a two-sport athlete. "I was good at things, but I wasn't great at anything like Taylor is at jumping. I've always thought about if I could beat any of the them, but my focus is on getting more consistent at basketball."

Walls even won a "Chubby Bunny" contest in high school. "Chubby Bunny" is a game in which participants stuff as many marshmallows into their mouth at once as possible.

"I do have big cheeks," Walls said with a laugh. "That's something that's stayed since I was a baby."

Walls did admit to not being a very good singer, and said she has been criticized for her dance moves. She said she and one of her sisters have tried to do some dances for Tik-Tok while they are at home on quarantine.

"Me and my sister have tried a couple times, but then we watch it and we're like, 'We can't post that,'" Walls said with a laugh.