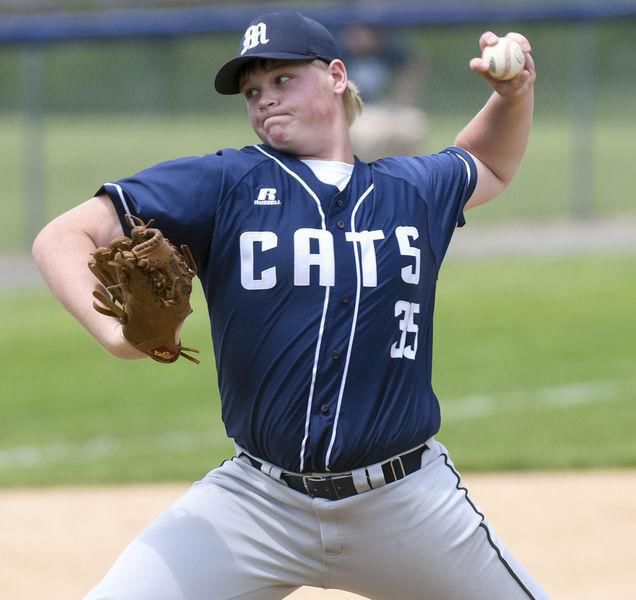 Mifflinburg’s Cade Dressler delivers a pitch against Danville during a 2019 district playoff game. Dressler made a verbal commitment to attend Virginia Commonwealth University in February. 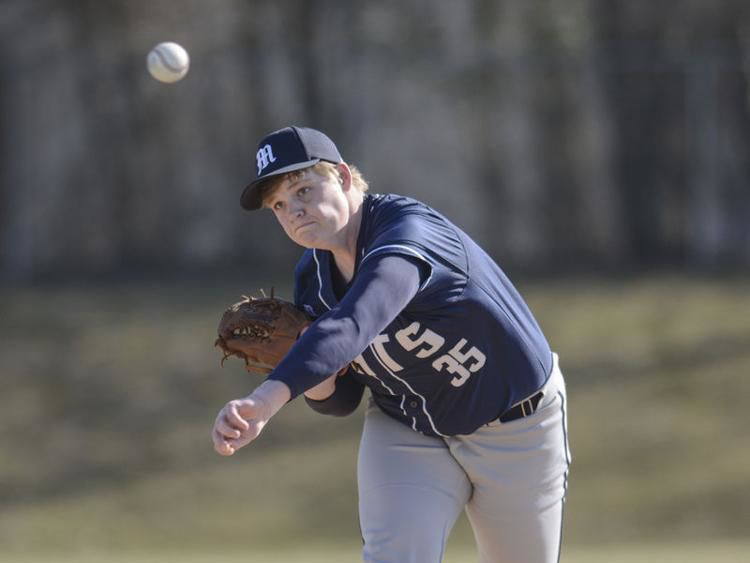 Mifflinburg’s Cade Dressler delivers a pitch against Lewisburg during a 2019 game. Dressler made a verbal commitment to attend Virginia Commonwealth University in February.

Mifflinburg’s Cade Dressler delivers a pitch against Danville during a 2019 district playoff game. Dressler made a verbal commitment to attend Virginia Commonwealth University in February.

Mifflinburg’s Cade Dressler delivers a pitch against Lewisburg during a 2019 game. Dressler made a verbal commitment to attend Virginia Commonwealth University in February.

When Cade Dressler decided to pursue a future in baseball, he also became his own PR firm.

He started by sending introductory emails to upward of 300 college programs. He followed up inquiries by providing a highlight video, then painstakingly researched the academic opportunities at schools that showed interest.

So how ironic is it that the Mifflinburg junior invested so much time and effort in his pursuit of a scholarship only to watch a dream situation unfold in a few short weeks?

The big left-hander impressed so much at a mid-winter camp that Virginia Commonwealth University’s coaching staff almost immediately had him return for the full recruiting pitch.

Dressler, who said he’s “not one to jump the gun on anything,” was all but convinced to make Richmond his college home on the subsequent early February ride home.

“They gave me the offer and said, ‘We’ll give you a couple days to think it over, sleep on it, then we’ll call you and see where you stand.’ (Two days later) I decided to call them,” Dressler said. “I thought through every scenario and every possibility; I weighed my other offers and some other stuff, especially academics. I came to the decision that this is the place for me. So let’s do it.”

Dressler’s college commitment capped a year that began with a breakout sophomore season, and he soon came to be regarded as one of the state’s top lefties in the Class of 2021. His decision also preceded by about a month the cancellation of spring sports due to the coronavirus pandemic. So Dressler is among the fortunate few not impacted by a lost junior season that’s vital for a college prospect’s resume.

“College coaches want to see kids compete and see how they’ve developed because kids mature differently, so they’ll be watching the junior year closely,” said Jason Dressler, Cade’s father and Mifflinburg’s football coach. “He really is very lucky. Even though COVID-19 is keeping us from having a junior year, all the work he has been doing has obviously paid off. It allowed him to talk to a school like VCU, get them to talk to him and want him to play there. I’m really proud of the work he has put in.”

So then how ironic is it that Dressler felt the real work began after he pledged to pitch at VCU?

Dressler’s conviction in hard work’s reward was reinforced when he was a pre-teen. The cousins young Cade would often work out with, Cole and Ty Walter, were state place-winners (Cole a 2015 PIAA champion) who earned wrestling scholarships to Lehigh and Cornell, respectively.

“Seeing that as a kid stuck with me,” Dressler said, “watching all the work they put in and the results they got and seeing them in a place (Division I athletics) I wanted to be.”

He played youth football and baseball for years, then stepped right into his dad’s starting lineup as a 5-foot-11, 230-pound freshman lineman. He credited that time under the Friday night lights for giving him the confidence and poise to pitch varsity ball in the spring. He made 11 appearances for Tom Church’s club in 2018, going 2-2 with two saves and a 3.50 ERA over 22 innings.

“At the end of his freshman year, I looked at him and said, ‘OK, bud, it’s time to start making some decisions about what your future holds and what direction you want to go,’” Jason Dressler recalled. “I’m a football coach — that’s what I love and what I’m passionate about — and I want my kids to find something they love and are passionate about.”

Cade — long interested in an engineering career — mulled over the two sports, approached his parents for advice, and came to the conclusion that baseball was his best avenue to success.

“The way I kinda looked at it is, I’m an offensive lineman at 6-2, 230, so I can be an average-size to small-size college lineman,” he said. “I can work really hard but still not meet my goals because physically I don’t have the size I need. Physically, for baseball, I’m ahead of the game, and I thought if I put my work into baseball I could reach the goals I wanted to achieve.”

The scholarship campaign took off from there, virtually (via emails) and in reality with the construction of a backyard mound and Cade joining a Baseball U. of Pennsylvania (BUPA) travel team.

Dressler’s sophomore season was special. He went 7-3 with a 1.96 ERA, striking out 61 over 57 innings for the district semifinalist Wildcats. His only losses were to a district champion (Montoursville) and two district runners-up (Central Columbia and Danville). His most impressive outing was a six-hit shutout with 11 strikeouts and no walks at eventual Class 4A state champion Selinsgrove.

Baseball continued through the summer and into the fall, often following Friday football with trips to Saturday morning ballgames. Dressler made a visit to UMass-Lowell, which he placed atop of list of potential college destinations that included Bucknell, Lehigh and Swarthmore. He was still actively seeking opportunities through the BUPA exposure, and banking on his improvement to catapult him after his junior year.

“After leaving VCU, we talked about making a decision too early,” said Jason Dressler. “On the flip side, we also talked about how, in Division I baseball, a lot of schools seem to have their rosters filled in advance. You could feel some pressure from that angle, that his window of opportunity may not be open as long was we’d like it to be.”

Dressler’s mass email strategy put him on a lot of colleges’ mailing lists, and he received his fair share of generic “Dear prospective athlete ...” spam in return.

A December message caught his eye, though, enough to trigger the research reflex. He was immediately taken with VCU’s online profile — from the fact the Rams play at “The Diamond,” gleaming home of the Richmond Flying Squirrels, the Atlanta Braves’ Triple-A affiliate, to the school’s engineering program — and made plans to attend its mid-January camp.

In a newly renovated indoor facility located beneath a parking garage, Dressler’s parents watched as he completed drills and threw a brief bullpen session. When the camp ended, Dressler was pulled aside by several coaches who asked he and his parents to join them for a tour of the new facility.

The Rams have flourished under nine-year coach Shawn Stiffler, winning at least 34 games in each of the last six full seasons, including two Atlantic-10 regular-season championships in the last three years. They made the program’s first NCAA Super Regional appearance in 2015.

“Coach Stiffler told Cade, ‘We’re going to keep an eye on you; we’ll definitely be coming to watch you this spring,’” said Jason Dressler. “A week or so later, we got a message from the pitching coach (Mike McRae) asking if we’d be interested in coming for a visit. I thought, ‘We’ll look at the game schedule and find a good time,’ and they were like, ‘No — we were thinking maybe Friday.’”

Dressler returned to Richmond with Jason, mom Danielle and brother Troy, a rising freshman at Mifflinburg, for a four-hour tour of the campus, stadium and surrounding area conducted by the entire coaching staff. He left with a scholarship offer just 3 1/2 weeks after attending the VCU camp.

“It was a top-notch recruiting trip, and through the whole event you could tell Cade was really liking everything about it,” said Jason Dressler. “Cade’s not much of a talker by nature, but on that trip home it was just non-stop talking.”

Though he was unknown to Stiffler and Co. on Jan. 19, by early February the Rams’ coaches knew he was the No. 8 ranked lefty (and No. 39 player overall) in Pennsylvania’s Class of 2021 according to Prep Baseball Report. The scouting site described Dressler as commanding “a three-pitch mix with physicality in the lower half, touching 85 mph with two quality secondary pitches (curveball, change-up) at near fastball arm speed. ... With more flexibility and explosiveness, Dressler could be lights-out at the next level.”

“The biggest thing that has helped was the weight room, lifting four days a week or more, and getting stronger every day,” Cade Dressler said. “It helped me have more confidence, physically, and also being able to throw longer with better conditioning and more strength. Also, just the countless times my brother and I go in the backyard and throw. We focus on mechanics all the time; we throw at different targets to create better control. We’re always trying new grips and trying to get a feel for new pitches. And I’ve also watched tons of YouTube (pitching videos).”

While he was “hugely upset” that the high school season was canceled, Dressler added that he “saw this kind of as an opportunity to make myself better in a way I couldn’t before.”

Because, it turns out, nothing in his research prepared him for the Division I scholarship being a double-edged sword.

“I feel great. Playing baseball in college is every kid’s dream, and having the opportunity to play on the level I am is that much better,” he said. “Basically what I felt once I made my decision is I’ve got six more years of baseball to play. It put a drive in me, reinvigorated my ethic, and gave me a new perspective. I have to compete on the level I signed up for.

“It scared me straight to be prepared to perform and succeed.”

How ironic is that?