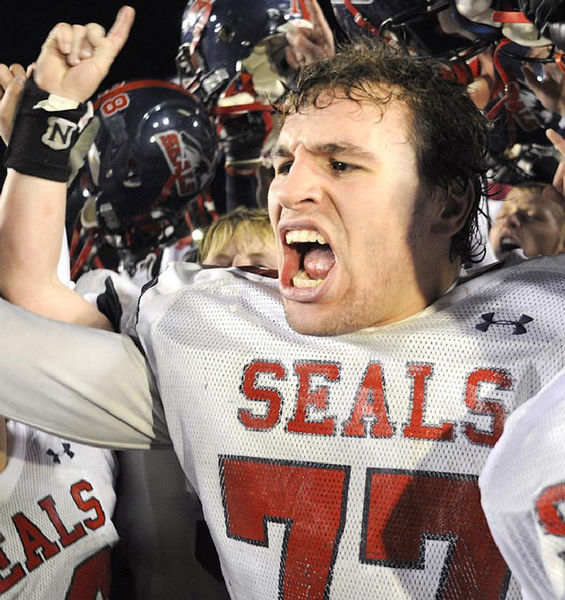 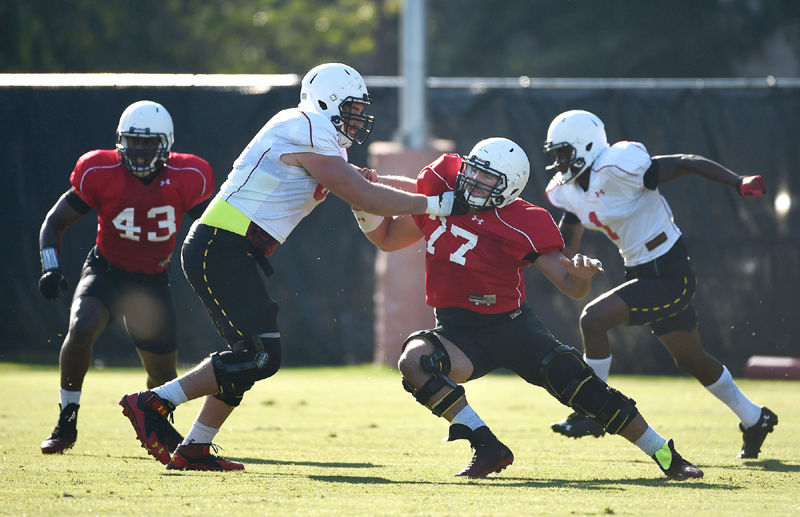 Just hours after he led his Selinsgrove High School football team to the 2009 state championship in Hershey, Spencer Myers was sweating with his wrestling teammates during a Saturday morning practice.

The day after Myers and his University of Maryland football teammates arrived back in College Park after their game versus Stanford in the 2014 Foster Farms Bowl in Santa Clara, Calif., Myers was back in the Terrapins wrestling room, and a week later he competed against Harvard.

That dedication — along with tons of hard work and perseverance — is what the 2010 Selinsgrove graduate hopes will allow him to achieve his lofty goal of playing in the National Football League.

Myers, who heads to Philadelphia in March as a camp invitee by the Arena Football League’s Philadelphia Soul, continues to keep in shape and improve his handwork and footwork under Bucknell University wrestling coach Dan Wirnsberger as a resident athlete. He is working with the Bison heavyweights.

Myers played with the AFL’s now-defunct Los Angeles Kiss in 2016, but injuries sidelined him for the next year. He had a tryout late in the 2018 season with the Albany Empire, which is where he developed a relationship with Beau Bell, then an Empire coach and now the first-year general manager/assistant head coach of the Soul.

“He really liked what he saw (in Albany) but they were No. 1 in the league and No. 1 in defense and they didn’t want to split the team,” Myers said. “But it’s a whole new year now and a whole new team.”

Myers’ plan at Maryland was to wrestle four years, then take a fifth year to play football for the Terrapins. After an injury forced him to redshirt a year, he decided that he wanted to continue his football dream, so he participated in both sports (under scholarship) in the same season.

The next level — had he decided to stay with wrestling — was the world team and the Olympics, but Myers wasn’t ready to give up on football, a sport in which he was an all-state player for the Seals.

“It was always a dream of mine to play in the NFL and this gives me the best opportunity in this league,” Myers said while watching the Bison work out at the William A. Graham Building.

Wirnsberger believes in Myers as well, noting the anecdote about his returning to the wrestling room immediately after football demonstrates his mindset about what he wants to accomplish.

“Most guys would say, ‘Let’s take this week off,’ or at least a day or two, but he’s a competitive guy and that’s why he was able to do both (Division I wrestling and football), because of his athleticism, but beyond his athleticism, his desire and will,” Wirnsberger said.

Many athletes would have given up and turned the page in their life, and certainly Myers still has a future in wrestling.

The son of former college wrestler and Selinsgrove coach Todd Myers — and his mother, Julia — will not give up, not just yet.

“It’s been a long road that has led to all this (the Soul tryout) and they say that your prime is from (age) 24 to 28 in the NFL, so I’m at the top of that now,” said Myers, who turned 28 last month. “But I’ve kept up with my body and flexibility and I eat healthy all the time. I feel like I’m down where I would be at about 24 or 25 so I believe I’ve got a lot of years left that I can go out and do it with these guys.

“I’ve shown that I can, I know that I can and when the times comes in March for the camp, that’s when I’ve gotta do it.”

Myers has tried out for several NFL teams and been contacted by others. The biggest hindrance has been his size.

Myers has been a defensive tackle and noseguard in the AFL, but in a tryout with the Redskins the coaches wanted him to play offensive guard.

In addition to the lack of size, he needed to improve on the use of his hands to play in the line at the professional level.

“Everybody (in the NFL tryouts) said, ‘You have the ability to play in the NFL’ so it was one of those things, I knew I could do it,” Myers said. “It was just I had to fine-tune some things, such as my hands.

“I never used my hands other than to come up and bull-rush you; now I’m able to use my hands better. I had pretty decent hips from wrestling and good leverage, but the biggest thing was the hands.”

So, what he did to change that was train in Florida last year with two former NFL linemen, Brandon McKinney and Eric Moore.

“They worked with me with my hands and got me a heck of a lot better,” he said, adding that he will return for more work with the two ex-pros in the next month or so before heading to camp in Philadelphia.

Wirnsberger said there is no question that Myers has what it takes to play football at that level or, if he decides, to try his hand at international-level wrestling.

Selfishly, though, he would love to keep him in Lewisburg.

“Anytime you bring in someone with that much confidence and self-belief, that’s really going to rub off on them. He’s a really positive person.”

Myers acknowledges that, with his experience and accomplishments, he can help the Bison’s big guys. But he believes it is extremely helpful to him in his own endeavor.

“It helps a lot,” Myers said. “Wrestling is a huge benefit to me for playing football and coming here and being able to work with the Bucknell heavyweights is huge for me.”

Wirnsberger said he would love sometime down the road to bring Myers in as a full-time resident athlete and eventually a member of the coaching staff.

“Spencer’s a guy that did it all,” he said of the college All-American and PIAA state champion wrestler.

Myers hasn’t played a down of football on Sunday afternoons, and he will never be satisfied until he gives himself every opportunity to do that.

Just like when he decided to play college football while still wrestling.

“The injury and the redshirt set me back, but if I never would have played football, I would have regretted it the rest of my life,” he said.

“You’ve got to be humble, but also have to have that attitude that you’re not going to back down and you’re going to win that spot.”

Success in AFL key to chance