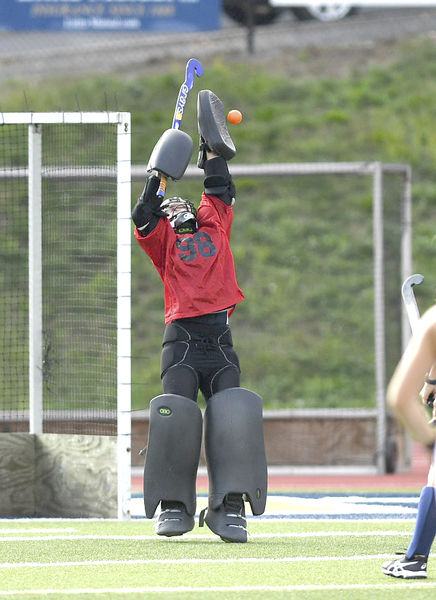 Juniata sophomore goalie Nicci Piccioni, a Midd-West graduate, jumps to make a save during a game last year. 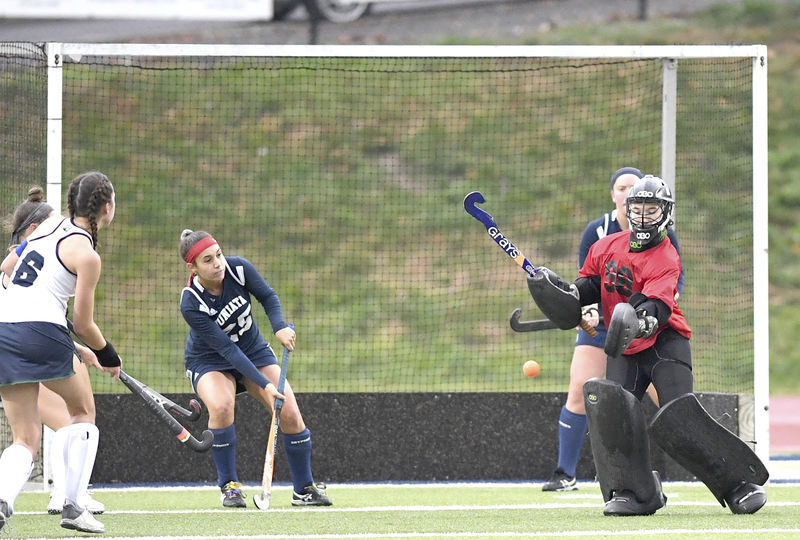 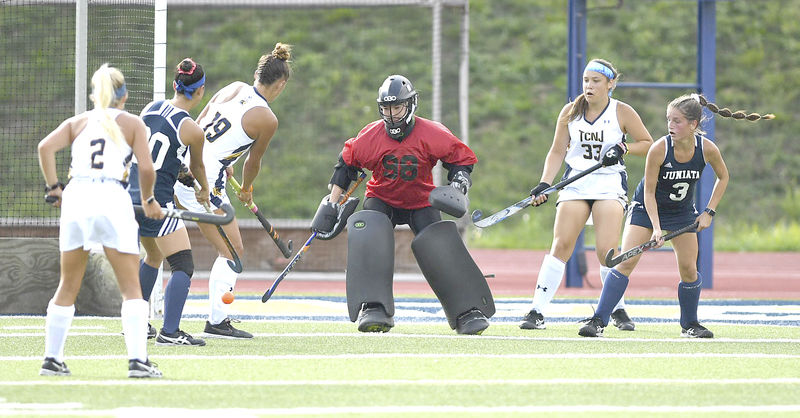 Juniata sophomore goalie Nicci Piccioni, a Midd-West graduate, keeps an eye on the action in front of her during a game last year. Piccioni was named the Landmark Conference Defensive Player of the Year in 2019.

Juniata sophomore goalie Nicci Piccioni, a Midd-West graduate, jumps to make a save during a game last year.

Juniata sophomore goalie Nicci Piccioni, a Midd-West graduate, keeps an eye on the action in front of her during a game last year. Piccioni was named the Landmark Conference Defensive Player of the Year in 2019.

Nicci Piccioni brought a field hockey resume as long as her stick to Juniata College as the newcomer in a five-goalie pecking order.

Though she didn’t doubt her ability following an all-state career at Midd-West, Piccioni understood she’d have to prove herself worthy of playing time at a vastly different level.

“I was very intimidated,” she said. “I was the youngest (goalie) — a freshman with three seniors and one sophomore — so I was very much the underdog and intimidated. But the Juniata team itself was so inviting. They welcomed me with open arms and they were nothing but kind.”

Piccioni developed a sisterhood with her fellow goalies, forming a bond — particularly with Eagles four-year starter Kylie Edwards — that helped prepare her to take over in the cage as a sophomore this past season.

In the face of what she called “one of the biggest (challenges) I could have thought of,” Piccioni excelled to a such degree that she was recognized as the Landmark Conference Defensive Player of the Year among a number of league honors.

“She’s like a baby bird,” the affable Edwards, a Danville graduate, said with a laugh. “It’s so satisfying to think I helped her grow in the position. I’m so proud of her for the things she’s accomplished. Every single thing she received from the Landmark Conference she has earned wholeheartedly through her passion, her dedication, her skill and her willingness to be coached.”

Piccioni showed up to Juniata as a wide-eyed freshman, eager to learn about the college game. She immediately gravitated to Edwards, a senior with familiar roots. Both were three-year starters in high school and two-time Daily Item first-team all-stars.

“Kylie and I had the bond of coming from pretty much the same place, knowing the same (high school) teams, and having a similar high school experience. It helped to share those similarities,” said Piccioni. “Kylie was who I looked up to the most — I felt she knew the most because was the starter — but they all went out of their way to help me. All of them helped to take me under their wing.

“Every time I did a drill we had three people behind the cage who would say, ‘This is what I noticed,’ or, ‘You did this well’ — so many different, valuable perspectives. I was scared when I got there that they’d be like, ‘Oh, we really don’t need another person,’ but they were so kind, like big sisters to me. I just tried to stay out of the way and be a sponge. I thought I’d be able to establish myself in time.”

Piccioni certainly did that, seizing the starting job after Edwards graduated.

After appearing in three games as a freshman in relief of Edwards — including nearly 16 scoreless minutes in a midseason loss at York — Piccioni said she realized, “I need to step up my game.”

“Girls in high school play field hockey for a whole range of reasons. The majority of college players have worked really hard to play in college, and they’re very passionate about the sport,” she said. “So it’s a whole new level, and I don’t know that it compares to anything I’d done in high school. It’s like playing the hardest games you could think of and playing them consistently.”

Last fall, Piccioni started every game in Juniata’s 10-10 season. She amassed 93 saves for a .769 percentage, and recorded four shutouts — one shy of the single-season school record. She was thrice honored as the Landmark Conference Defensive Player of the Week en route to the year-end honor and a first-team conference nod.