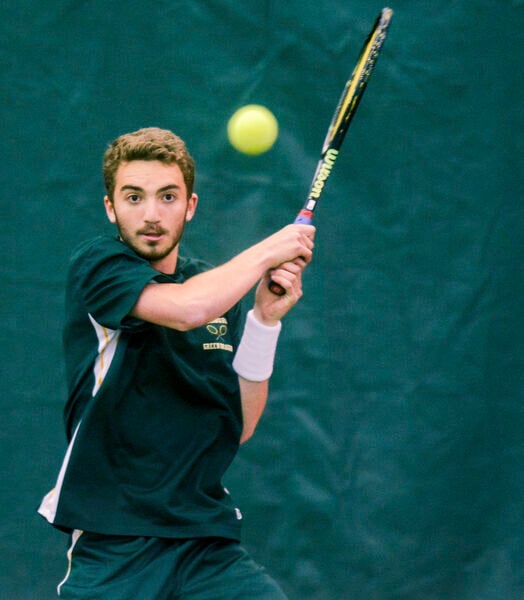 Lewisburg’s Tim Sprunt hits a backhand during a singles district semifinal in 2017. 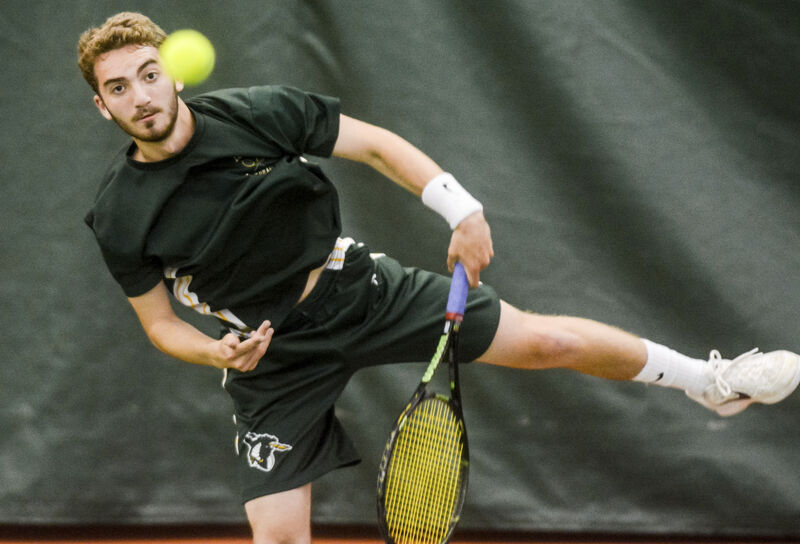 Lewisburg’s Tim Sprunt smashes a ball during the first round of state team tennis in 2017.

Lewisburg’s Tim Sprunt hits a backhand during a singles district semifinal in 2017.

Lewisburg’s Tim Sprunt smashes a ball during the first round of state team tennis in 2017.

When Tim Sprunt was making his college decision, he said the most important thing to him was academics.

However, the Lewisburg graduate also knew that he wanted tennis to be a part of his experience in college.

Sprunt — a two-time Daily Item Boys Tennis Player of the Year, and The Daily Item’s inaugural Male Scholar-Athlete of the Year in 2017 — decided to go to Case Western Reserve and attempt to walk on to the men’s tennis team.

“The first week I participated in a tryout session,” Sprunt said. “The coach ended up not accepting any walk-ons. Our personalities didn’t quite mesh, but I still wanted to play tennis, so I started pursuing other options.”

Sprunt was recruited to play tennis by other schools, but decided Case was the best fit for him academically.

After not making the varsity team, Sprunt found the club tennis team. Club sports fit between varsity and intramural sports at the college level. Club teams still compete against other schools, but there is less of a time commitment than playing a varsity sport.

“The club team wasn’t that developed,” Sprunt said. “Over the past few years, I worked with some other students to build up the club. I was happy surrounding myself with other players who were equal or had similar skill sets. I wasn’t concerned that it was club instead of varsity. The label wasn’t as important as being in the right situation.”

Heading into his senior year, which begins this fall, Sprunt will be the president of the Case club tennis team.

“Tim is a well-rounded individual, and tennis is a significant part of that,” former Lewisburg tennis coach Jim King said. “I’m not surprised at all to hear he’s the president of the club tennis team.”

King said Sprunt wasn’t the first player he coached to hold that role in college.

“There’s a bit of a legacy for that with Lewisburg tennis,” King said. “Ben Koch (a 2013 graduate) went to Kent State to become an airline pilot, and they didn’t have a varsity tennis team, so Ben became the president of the tennis club at Kent State.”

Sprunt said after a week on the varsity team, he was happy to end up playing club tennis.

“I was lucky in that Case has a lot of people who come from tennis backgrounds,” Sprunt said. “I don’t feel as if I lost anything. There are talented players on the club, and we’ve traveled to other places in the Midwest region to play other clubs.

During his time on the tennis team, Sprunt woke up for 5 a.m. training, was expected to hit between classes and then had a full practice later in the day.

“It really felt like a full-time job,” Sprunt said of being a varsity athlete. “I felt as though my full identity would be tennis and school.

“It can be very rewarding, but it’s a lot of commitment.”

Sprunt has been involved with other things on campus, including Camp Kesem a student-run organization designed to send kids whose parents have cancer to a free summer camp.

“That’s definitely something I couldn’t do if I was a varsity athlete,” Sprunt said. “I like having the freedom to take a spur of the moment trip. It’s nice to not be tied down to one thing.”

Gabby Holko — Susquehanna’s Director of Intramural and Recreation, in addition to being the women’s basketball coach — said the difference in time commitment was a major reason that some people chose to compete in intramural or club sports rather than be a member of a varsity team.

“The decision to be a student-athlete is tough,” Holko said. “You need to have great time management skills. You’re giving up a lot of your day.”

That’s not to say Sprunt doesn’t spend a lot of time on the tennis court. He said he plays four or five times per week on average, which includes running practice for the club team.

Sprunt said there is no coach, and that the members of the club executive team run practices and the club as a whole.

“It’s a different kind of playing,” Sprunt said. “I’m not necessarily chasing something like when I was playing in high school.

King said Sprunt has always been a hard worker and a student of the game, which is serving him well in his role with Case’s tennis club.

“He played within his ability and his skills, but at the same time, he was always looking to improve his skills,” King said. “He was always working on the strategy side of the game — how to construct a point, and playing to his strengths and his opponent’s weaknesses.”

King said Sprunt had the same approach to life, in that he was always seeking excellence and ways to improve himself.

Sprunt said the path he took to play club sports has allowed him to have the well-rounded college experience he wanted, which would have been more difficult, if not impossible, if he was a varsity player.

He said he hasn’t had to sacrifice much in tennis terms either. The club team has had former players from the varsity team join, and Case has gotten to play club teams from Division I schools such as Ohio State, Michigan and Butler.

“We get to play these amazing teams,” Sprunt said. “It’s really easy to get exposure to great players.

“I’m very thankful for how things worked out.”