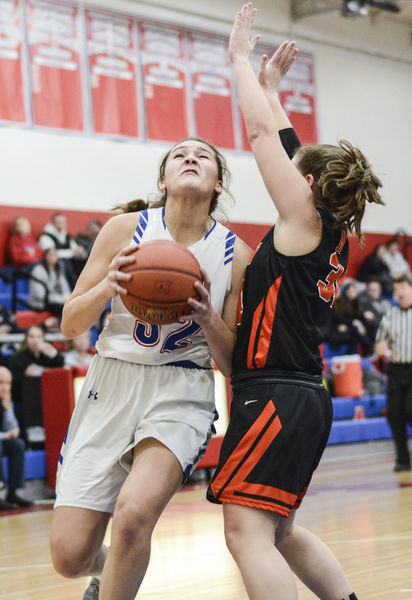 Selinsgrove’s Cierra Adams tries to drive to the basket against Milton’s Tori Brink during Monday’s game. 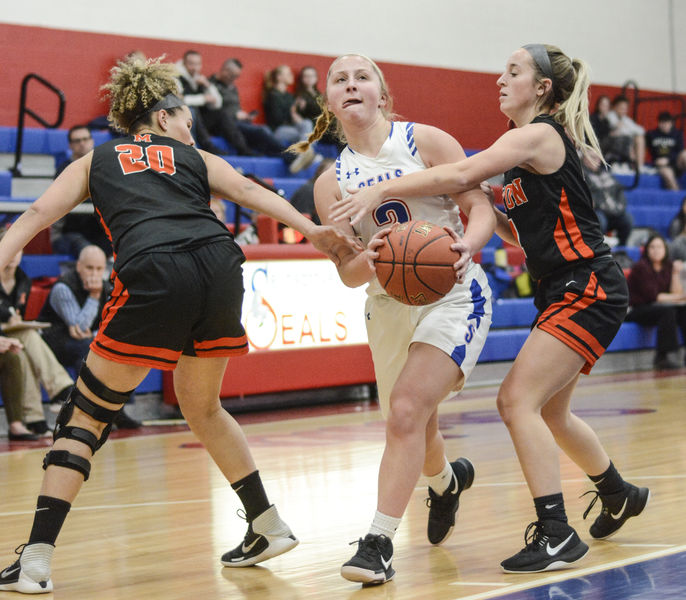 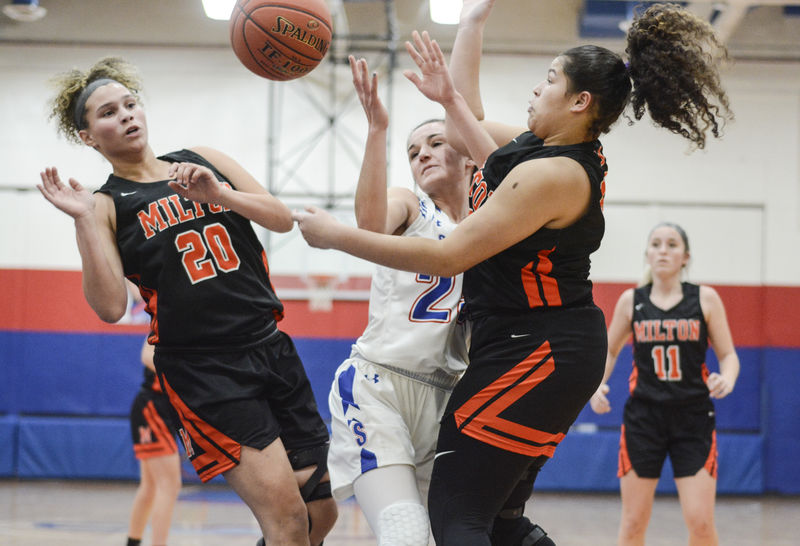 Selinsgrove’s Cierra Adams tries to drive to the basket against Milton’s Tori Brink during Monday’s game.

SELINSGROVE — Lexy Gabrielson’s last 3-pointer Monday didn’t occur during Selinsgrove’s game-ending 13-point explosion, but the shot may have lit the fuse for the Seals’ run.

Milton’s Taylor Snyder had opened the fourth quarter with a 3-pointer that all but erased her team’s 11-point second-half deficit and continued to swing momentum.

So when the ball came up the court and Gabrielson had an open look from the top of the key, she confidently triggered an answer.

“They kind of dropped off of me, so there was nobody guarding me,” said the junior guard. “I thought I should pull up and shoot one.”

It was that kind of aggressive play — infused with attitude — that defined the spree Selinsgrove used to beat the visiting Black Panthers, 42-29, in a Heartland Athletic Conference-Division I matchup.

“We’ve been in so many close games where we’ve sort of folded. I said, ‘You’re in a close game tonight (and) you can’t fold,’” said first-year Seals coach Ashley Kolak. “I said, ‘You have to take it to them.’ ... I knew they wanted it.”

Snyder scored seven of her game-high 16 points in a three-possession stretch of the fourth quarter to knot the score at 29. Her tying layup capped a 16-5 run over 5 minutes, 22 seconds after Milton had fallen behind 24-13 midway through the third quarter.

“We go through stretches where we struggle to score,” said Black Panthers coach Phil Davis. “When we do score and have a bit of success, it creates a little more energy and creates more tension for the other team. I think those things compounded and got us back into the whole thing.”

Selinsgrove broke the tie with an Avery DeFazio free throw that jump-started a sequence of points on six of eight trips. Lizzie Diehl made an inbound pass underneath the bucket to Gabrielson for an easy hoop, then Diehl hit a jumper from the right wing. DeFazio made two more free throws before sophomore Cierra Adams scored consecutive baskets off a Diehl assist and a her own steal for a 40-29 lead with less than a minute to play.

“We came alive in the fourth quarter,” said Gabrielson, who finished with a team-high 15 points.

The Seals (4-8 overall, 2-4 HAC-I), who had lost six of seven, struggled to score in the first half, particularly in a four-point first quarter when they shot 2-for-13. By halftime they had done just enough to lead (14-13), but Gabrielson and Adams — whose scoring averages of 9.0 and 7.5 ppg. lead the team — were limited to a basket apiece.

“In most of their games, (the Black Panthers are) holding teams to under 40,” said Kolak. “I have so much respect for that, being a very defensive-minded coach.”

Selinsgrove shot just 6-for-27 in the half, but that was offset by 12 Milton turnovers.

“We had to know where (Gabrielson) was, and then have some other people try to beat us from the outside,” said Davis. “I thought we did a real good job of communicating and working in that first half, and then they got hot to open the third quarter ... and they stayed hot for a little bit too long.”

Gabrielson popped eight points in just four minutes of third quarter, and that — combined with a Diehl basket inside — produced a 10-0 run for a 24-13 lead.

“I usually score more in first half,” said Gabrielson, “but didn’t score a lot tonight so I wanted to really put it out there in the second.”

Diehl totaled eight points and six assists in the win, while Adams had six points and 11 rebounds.

Neither team has traction in the HAC-I race, but Milton is alive for a District 4 Class 4A berth. Selinsgrove has a tougher road to make the District 4-11 5A subregional. Both are young, though, with Milton having three seniors and two juniors, and Selinsgrove boasting two seniors and three juniors.

Did not score: Emily Davis.