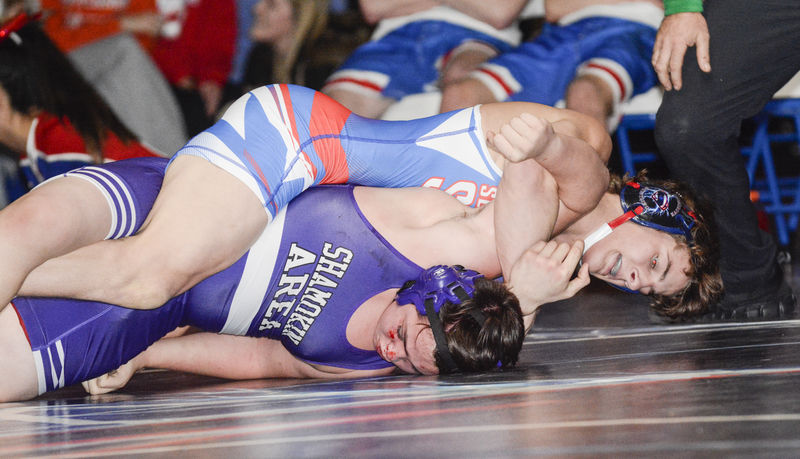 Selinsgrove’s Coy Bastian tries to put Shamokin’s Robert Harvey on his back during their bout at 170 pounds on Thursday. 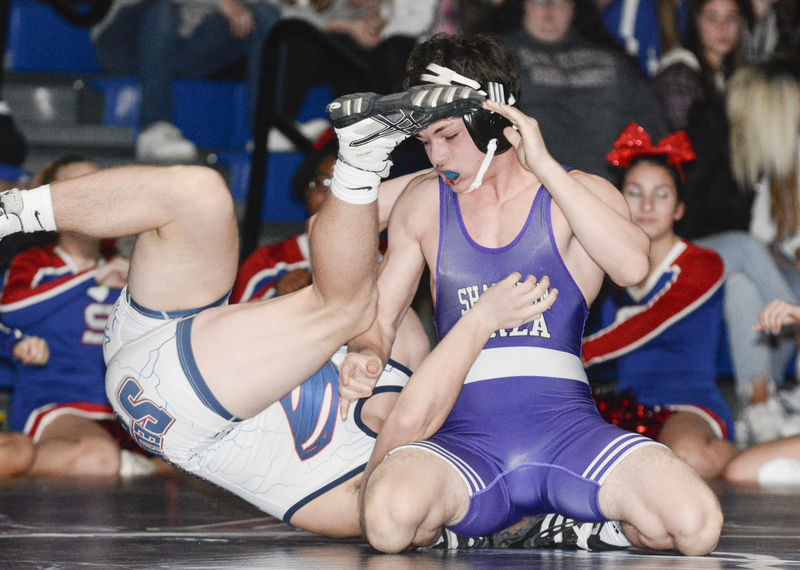 Shamokin’s Brian Long escapes the hold of Selinsgrove’s Dean Hollenbach during their match at 160 pounds Thursday.

Selinsgrove’s Coy Bastian tries to put Shamokin’s Robert Harvey on his back during their bout at 170 pounds on Thursday.

Shamokin’s Brian Long escapes the hold of Selinsgrove’s Dean Hollenbach during their match at 160 pounds Thursday.

The dual started off at 160 pounds with a bit of a surprise, as Shamokin’s Brian Long notched a fall of Selingrove’s Dean Hollenbach with 25 seconds remaining in the third period.

“He surprises us,” Shamokin coach Todd Hockenbroch said of Long. “That doesn’t mean he’s hard to coach. Sometimes, we just let him go and do his thing. He’s a natural out there.”

Hollenbach held a 3-2 lead through two periods over Long, but Long recorded a takedown and generated back points before sealing the match 5:35 in.

“That was a surprising match,” said Selinsgrove coach Seth Martin. “I didn’t expect that outcome. We only wrestle Shamokin once per year, and we don’t wrestle similar schedules, so it’s not easy to try to compare kids on paper.”

The rest of the match, however, fell the way of the Seals (2-0). Coy Bastian, Steven Miller, Trey Baney and Nate Schon each recorded falls, and Ryan Aument’s 14-3 major decision at 195 propelled the hosts to a 28-6 lead over the Indians. Leo Martinez continued the momentum for Selinsgrove at 106 pounds, picking up his second win of the year in a 19-2 tech fall.

“That was big to get our guy at 106 his second win,” Martin said. “He wrestled well. You’ve got to win the matches you can compete in, and that was an opportunity.”

The most tightly contested match of the dual came at 145, as Selinsgrove’s Teague Hoover took Shamokin’s Wolfgang Pearson to the wire in an 11-8 decision. Hoover battled back to tie the bout at 4 after one period, and wrestled Pearson to a 6-6 tie through two. Pearson pulled away in the third after injury time between the second and third periods for Hoover’s left knee.

“That was a good match,” Hockenbroch said. “Our guy needed that one.”

Martin said: “I know Teague was upset with the outcome, but to wrestle to 11-8 with Pearson is a solid match. He wasn’t out there stalling him, either. He went out there to try to win.”

Tyler Whary, Wade Alleman and Max Madden added falls for Shamokin (0-7) in the loss, with Madden’s pin closing the dual at 152 pounds.

“Max stayed aggressive out there and got a fall at the end,” Hockenbrock said. “All the guys who won for us tonight did what they needed to do. Our offense is coming around.”