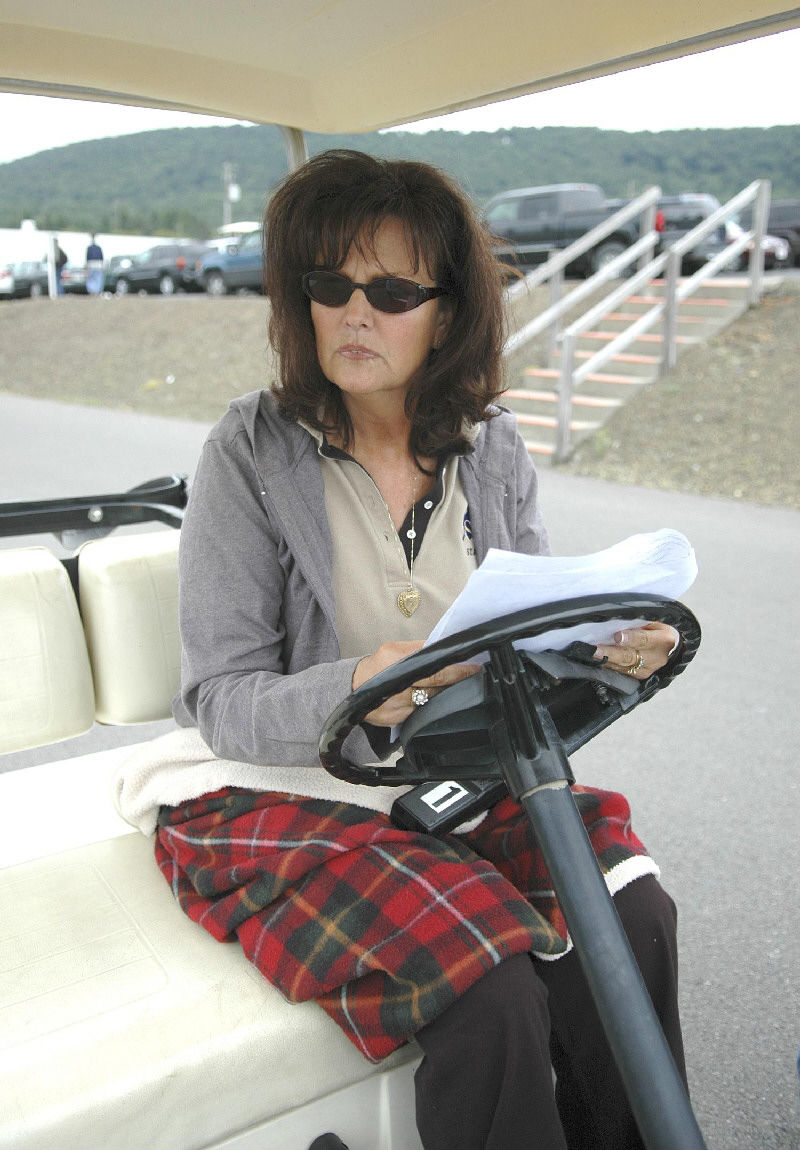 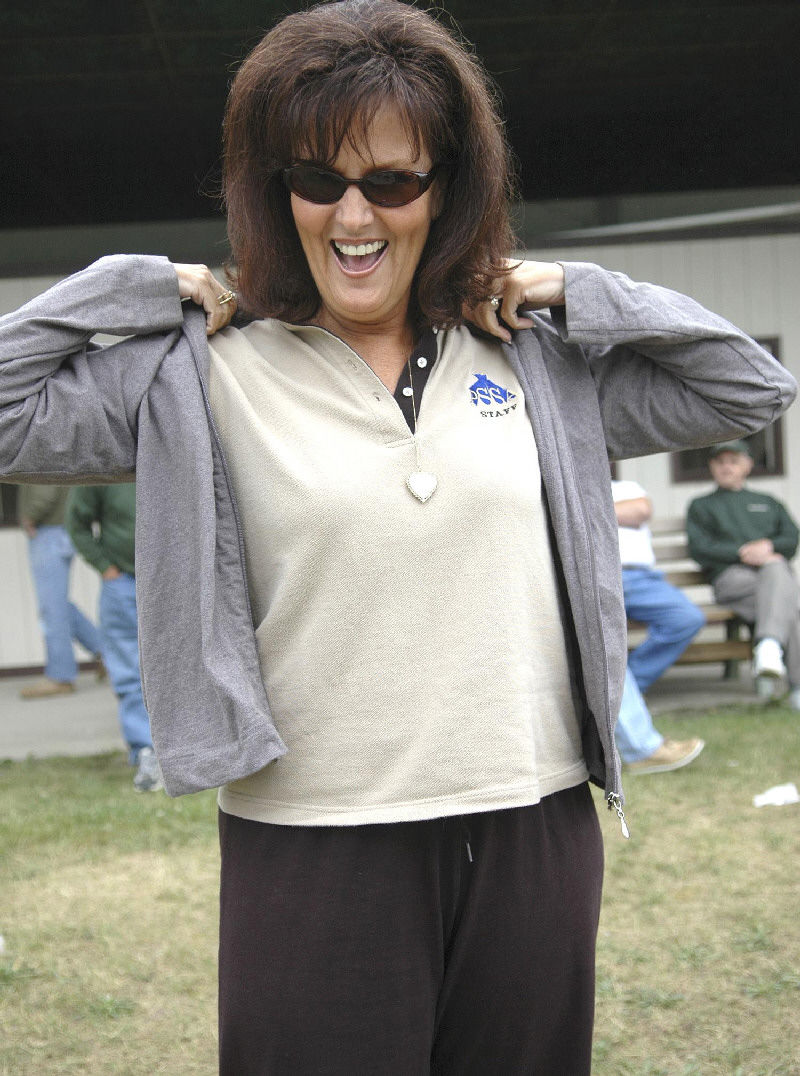 Trapline supervisor Marian Chiavaroli prepares to go out to see how her "kids" are doing Thursday during the Pennsylvania State Shoot, Elysburg 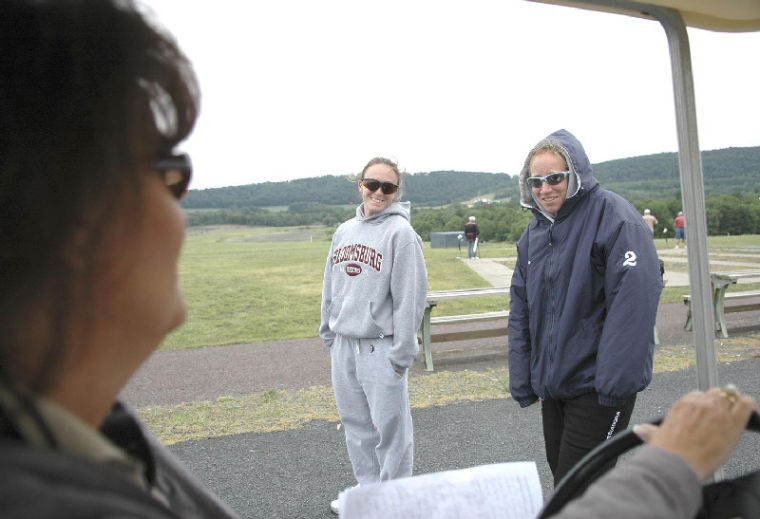 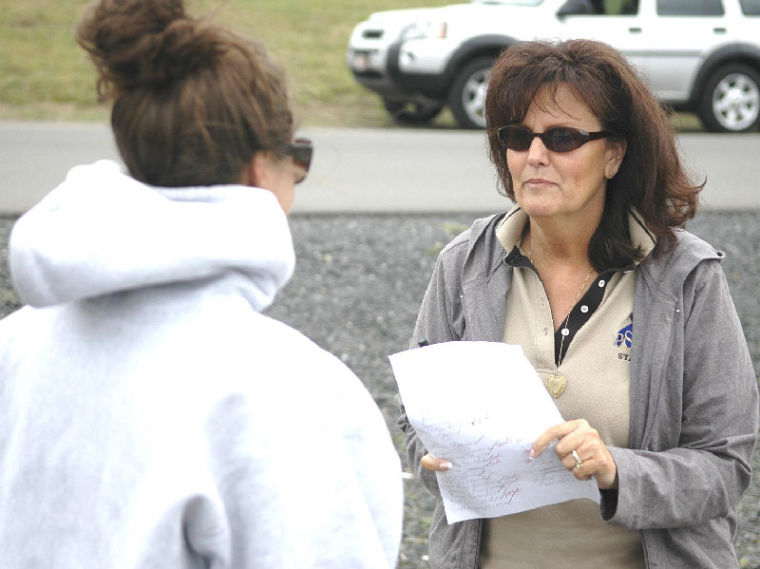 Trapline supervisor Marian Chiavaroli prepares to go out to see how her "kids" are doing Thursday during the Pennsylvania State Shoot, Elysburg

ELYSBURG -- Marian Chiavaroli was out mowing her lawn one day when a familiar face came by and asked her for a favor. Would she be interested in coming over to Valley Gun and Country Club and help with the recruitment and training of the new workers for the Pennsylvania State Trap Shoot? The request was not out of the ordinary. And, having moved back to the area with her family after living in Upper Darby, it would provide both an opportunity to meet up with old friends and also make some money. It's been 19 years since line facilitator Dave Dyer made the request to his former employee and the move has benefited both parties. "I had trained Marian when she worked here in high school and college and knew the quality person we'd be getting," Dyer said. "All that remained was having the late Bill Shutt to hire her and she was a big asset to our supervisor at the time Glenda Vottero. "To show you just how great of a job she and her staff has done over the years, ask any of our shooters about the workers here and the response would be nothing less than glamorous," Dyer said. The Pennsylvania State Shoot is in its 116th year and has grown in popularity with shooters all over the country, and in some cases beyond, to the point where it has become the second-largest ATA event. One of the reasons in addition to the outstanding facilities is the outstanding quality of the work force. Recruitment for potential new workers starts in late March or early April at all the local high schools where students and parents are invited to the main building on the grounds where Chiavaroli, Dyer and Chuck Fritzges brief the newcomers on what type of work is being offered along with their responsibilities and the amount of money which could be earned. Practice lasts two hours every two days for six weeks and is only for the new employees. But on occasion some seasoned workers may be asked back for a little refresher course. "We usually need more girls than boys, especially since the traps are automatic and a trap boy needs only between 12-15 minutes to make sure the trap is filled," Chiavaroli said. "The girls do all of the scoring and will also do some of the running. In order to provide them with the opportunity to learn how to score an event we invite some area shooters to shoot for free in order to allow the newcomers to practice scoring an event. "Once the actual shoots take place how well they perform during the training session determines where they will be placed. It could be the practice traps or right on the line but it all depends upon how they do and, after 19 years, I have a good feel for who should be going where." Chiavaroli, who along with doing the hiring and participating in the training, also does the scheduling and payroll for the events and has seen plenty of changes over her tenure: everything from new chairs and scoreboards to an expansion to 48 traps and the voice-activated traps. "The changes for the most part haven't been that drastic," Chiavaroli said. "But certainly the voice activation has made it easier for the trap boys and scorers. We also have the luxury of having five practice traps, which you won't find at most places." However, there is a regimen associated with the shoot that continues to rise and make the Pennsylvania shoot one of the more pleasurable places to be at for a shooter, and that's the quality of the work provided by the hands-on employees who are right up there on the line with the shooters. "I think that's what helps continue to bring more shooters here," Fritzges said. "We hear from the people and they tell us these are the best-trained, well-mannered kids they have dealt with and that makes us feel great. "This is a team here and we not only teach our kids how to score and work the trap houses but how to interact with the people and be nice and the shooters really appreciate that. We talk about the great reputation we have here and let them know what we expect and if they can't accept those conditions it is better if they find someplace else to work." Chiavaroli's day ranges anywhere from 12 to 16 hours and in some cases she will go home after a day at the shoot and work on anything from the employee payroll to scheduling, but with little or no complaints. "I can't believe that it's been 19 years because I never really think about it," Chiavaroli said. "I really enjoy working with the kids and we always stress that this is a team and we are all working together for the same results. It doesn't make a difference whether it's the people in the main office, the trap boys or anyone associated with the shoot itself, we are all working together to make the event as great as it can be for the shooters. "You only feel bad when some one who has worked here for awhile leaves or one of the long-time employees, who are like a part of history here, passes away."