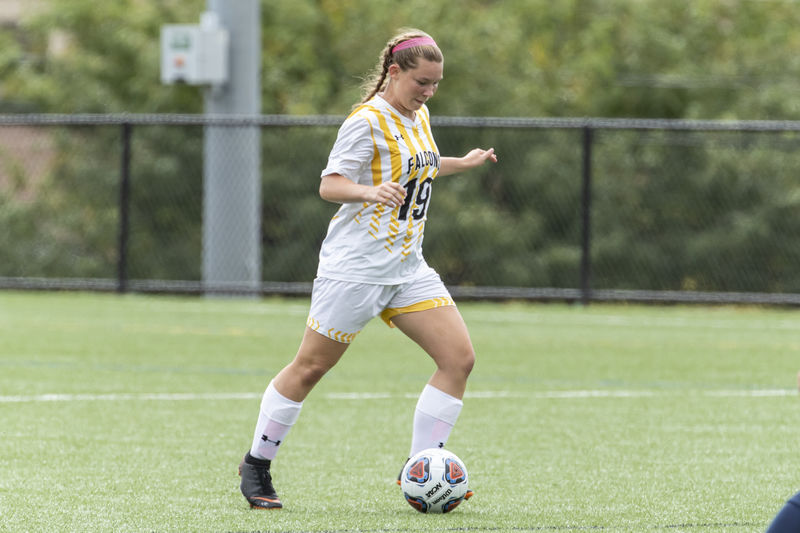 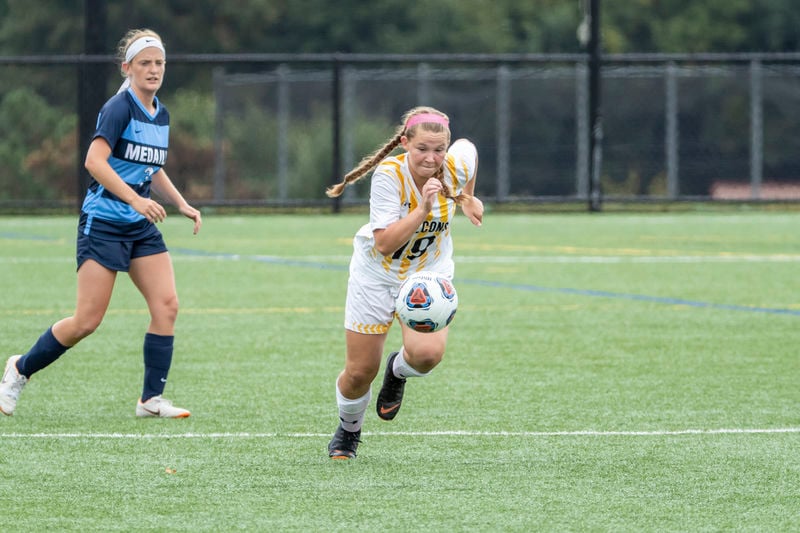 Cedar Crest freshman Madison VanKirk, a Shikellamy graduate, chases after the ball during a game against Medaille last year. 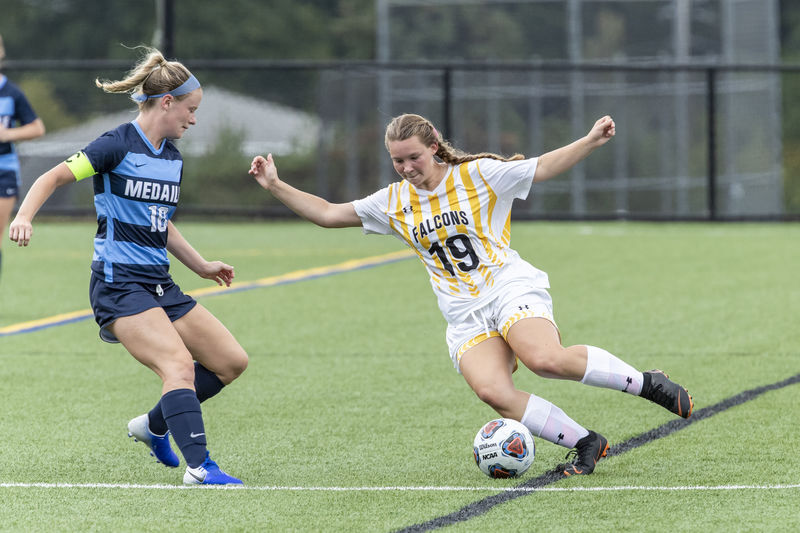 Cedar Crest freshman Madison VanKirk, a Shikellamy graduate, chases after the ball during a game against Medaille last year.

Madison VanKirk wasn't sure what to expect when she showed up for preseason women's soccer practice last year at Cedar Crest College.

"At the beginning, I was super nervous because I knew it was going to be a lot different than high school," VanKirk said. "It was nerve-racking especially because I was coming into a team that almost won the conference. I didn't know how I'd fit into the new team dynamic, but I found my place. I switched around to some different positions, and found a home at outside right midfield. I ended up loving it. It gave me room to maneuver."

VanKirk, a Shikellamy graduate, said a talk from coach Sarah Wolcott helped put her at ease early in her time with the Falcons.

"Coach Sarah never made the freshmen feel like we were underclassmen," VanKirk said. "From Day 1, I realized that everyone was at the same level. Everyone was competing for spots. It didn't matter if you started last year or if you were new. It wasn't like I was already at the bottom of the totem pole, so that made me more comfortable.

"She explained that whoever worked hard would be who contributed to the team."

Wolcott said that was something she said every preseason, and that she was glad it impacted VanKirk.

"To me, it doesn't matter if someone is 21 and has been on the team for four years or if they're 17, 18 years old and joining us for the first time in August," Wolcott said. "The people who work hard are the people who deserve to play."

VanKirk was certainly someone who worked hard.

"I would never stop," VanKirk said. "It didn't matter how tired I was, how thirsty I was; if I had just run up and down the field 50 times, I was going to do it again."

"Her work ethic and obvious desire to get better and be the best soccer player she can be was — throughout the recruiting process — pretty obvious," Wolcott said. "It's not just that she could contribute in a soccer sense — she has the skills and athleticism — but her mindset is above average. She has what I call a blue-collar work ethic. She's always ready to go, go, go. She's like the energizer bunny."

VanKirk started 15 games and appeared in 17, missing two games in early October due to a knee injury.

"I ended up missing two games, which we ended up winning anyway, so it was OK."

VanKirk's injury was worse than anyone initially realized, and she underwent knee surgery over winter break.

"She essentially played injured throughout the whole season," Wolcott said. "Once we finally found out what was going on with her knee, we all said, 'Wow, you're tough.'

"What she did on basically a leg and a half was amazing."

VanKirk's toughness was on display in the conference tournament final, which the Falcons lost in a shootout to Cairn. At one point, Wolcott removed VanKirk after noticing she seemed to be in pain due to her injury. VanKirk said she was fine to return, which Wolcott questioned. Then VanKirk looked to her coach and said, "I've got one more."

"The players each came up with a word that defines them in the preseason," Wolcott said. "Madison's was actually two words, 'One more.'"

That was VanKirk's plan to succeed during her freshman year in college. She said the biggest difference between high school and college was the players had no obvious weaknesses, which meant she had to outwork her opponents.

"My biggest thing was hard work and to never stop pushing," VanKirk said. "I knew the defender on my side would eventually get tired, or I'd keep pushing and if she kept up she'd be exhausted, too. .... I wasn't going to stop.

"It wasn't necessarily the best plan, but it would eventually work," she added with a laugh.

For now, VanKirk is focused on her recovery from surgery.

"I'm doing well now," VanKirk said. "The doctor said everything looks good from the x-ray. My knee is still a little week, which is to be expected. I'm about six months out from surgery, but I've been strengthening it now since the gyms are open.

"My first goal is just to get back to where I was. It's a challenge because I'm just beginning to run again. I have about two months."

Wolcott said she was confident VanKirk would be ready when the season began.

"I have no concerns about her fitness," Wolcott said. "She'll get back in the swing of things. If she — knock on wood — stays healthy, I think she'll show our conference and our opponents exactly who Madison VanKirk is. They got a glimpse of that last year. She has a lot of potential."

The Falcons are aiming for a third straight trip to the conference tournament final, and this time a win to qualify for the NCAA Tournament.

"Pretty much I want next year to go the same as last year except to stay uninjured and to win the last game," VanKirk said.