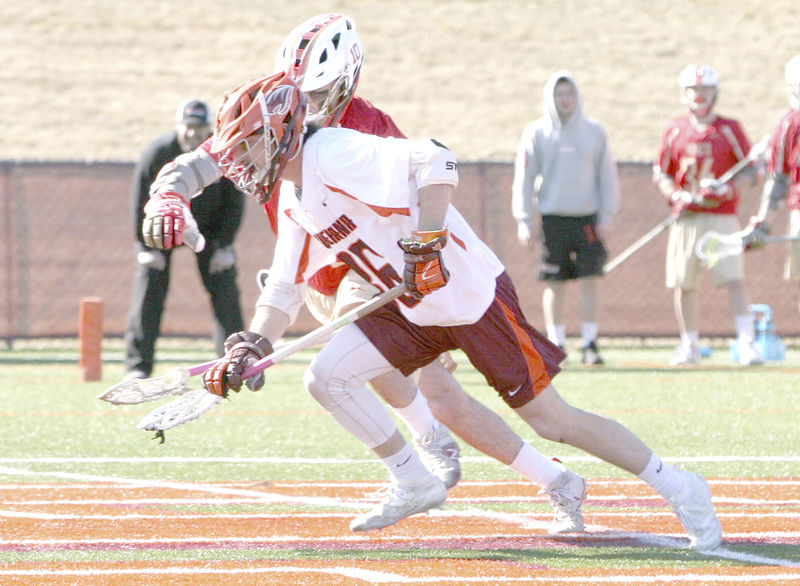 Susquehanna junior Ryan Bucher, a Selinsgrove grad, runs toward the ball during a game against King’s in February. 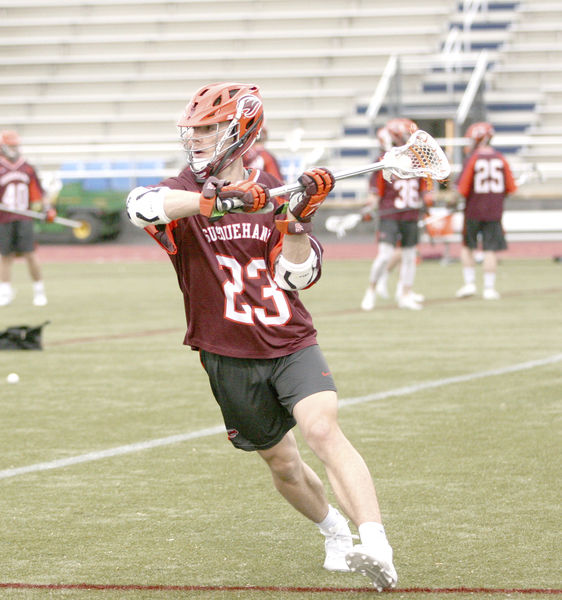 Susquehanna freshman Charlie Hayes, a Selinsgrove grad, takes a shot during warmups before a game against Immaculata in March.

Susquehanna junior Ryan Bucher, a Selinsgrove grad, runs toward the ball during a game against King’s in February.

Susquehanna freshman Charlie Hayes, a Selinsgrove grad, takes a shot during warmups before a game against Immaculata in March.

When Ryan Bucher and Charlie Hayes left for college last fall, they didn’t have far to travel.

Bucher and Hayes — both Selinsgrove graduates — live about a five-minute drive from Susquehanna University, where both play men’s lacrosse.

“A lot of kids want to get out of town, want a new experience, which I understand,” Susquehanna coach Stewart Moan said. “It’s a little rare to have the local kids stay.”

Bucher, who just finished his junior year, said proximity to home wasn’t a concern for him.

“I never had much preference about whether to stay close or leave,” Bucher said. “After meeting the team and going on visits, I knew Susquehanna was the place for me.”

Hayes, a rising sophomore, said he originally didn’t consider Susquehanna because he thought it was “too close.”

Once he did some research, and Moan began recruiting him, Hayes gave his hometown school a look.

“All around it was really good for me,” Hayes said. “I looked at all the factors — lacrosse and school — and it was a no-brainer. Why would I pass up a good opportunity because it was close to me?

“It’s not a very far distance, but it’s enough.”

Moan said he was pleased both decided to join the River Hawks.

“It is a unique recruiting situation, and we got two good ones,” Moan said.

However, the coach wanted to be sure that Bucher and Hayes would get the full college experience.

“As I told both of them in the recruiting process, even though they may live 10-to-15 blocks away, it could be 15 states away,” Moan said. “I joke with them that the only difference between them and a kid from Massachusetts is a shorter drive to get home for Thanksgiving.

“Both are having the traditional college experience. It’s good for their parents, though, because it’s easier for them to get to the games.”

Bucher said both his grandfather and father went to Susquehanna, and they told him, “If you go to Susquehanna, you can’t live at home, and we don’t want to see you that much.”

“Most of my friends are from (New) Jersey, and they say, ‘We go home more than you do,’” Bucher added.

Hayes said he has been having a similar experience.

“One thing I learned from Ryan Bucher is that once you’re on campus, it feels like a different world,” Hayes said. “You’re removed from Selinsgrove. Your friends, your social interactions, all are at college.”

Hayes said he had a specific request of his parents before he left for school.

“My family like to take our dog on walks on the Susquehanna campus,” Hayes said. “I said, ‘I don’t mind if you keep doing that, but please veer away from my dorm.’

“I didn’t want to lose the immersive feeling.”

Bucher took on a new role as a junior, that of defensive midfielder.

Moan was impressed with what he saw from the junior.

“This year he really stepped forward as a defensive midfielder,” Moan said. “Things really started clicking for him. Unfortunately, our season was cut short. It was like the light bulb came on for him. I’m excited for his senior year. He’s really embraced the role, focused on it, and is starting to excel at it.”

One benefit for the River Hawks is playing defensive midfielder allows Bucher to use his athleticism.

“I get to run around and play, and get flying around the field,” he said.

Hayes also spent some time in a new position in his first year with the River Hawks.

“I had some problems with Charlie,” Moan said. “I struggled with having him play attack or midfield. ... He’s such an athletic kid. He’s a big, strong kid, especially for a freshman. That excited me, to have him play at midfield with his athleticism. He’s more polished and has more comfort level at attack.”

Moan said the original plan was to have Hayes mostly learn behind Preston Oullette — a senior who led the team with 21 goals in the abbreviated season — and take over as the left-handed attack next year.

“Coach Moan had a conversation with me in his office,” Hayes said. “Obviously, I wasn’t excited about the prospect of sitting on the bench, but I 100% understood. ... The speed and intensity are much different than what I experienced in high school and club. Coach didn’t want to throw me in the deep end and have me drown.”

Moan decided he wanted to use Hayes’ athleticism in the midfield.

“Coming in, I’d been an attackman all throughout high school,” Hayes said. “Obviously, it was daunting at first. I had to rethink ball movement, distribution and my role on the field.”

Hayes said he enjoyed the experience and learned a lot that he can use in the future — but that didn’t help Moan decide where to use him.

“The decision probably won’t be about him,” Moan said. “That’s a compliment to him because he can do both. It will be what other guys can do that will decide where he plays.”