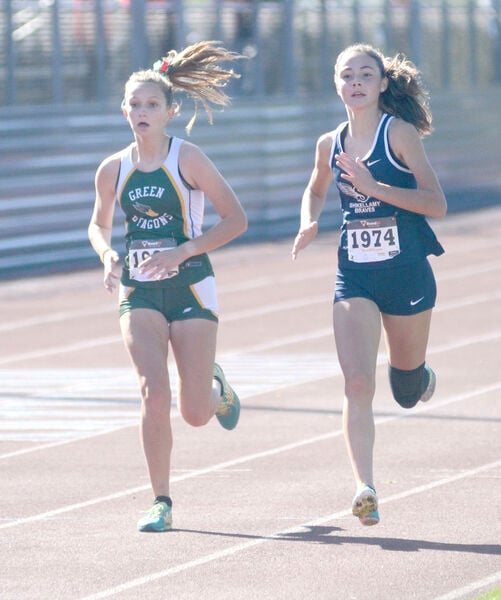 Lewisburg's Samantha Wakeman, left, and Shikellamy's Elli Ronk battle for position in the last 50 meters of the Heartland Athletic Conference Invitational on Saturday. 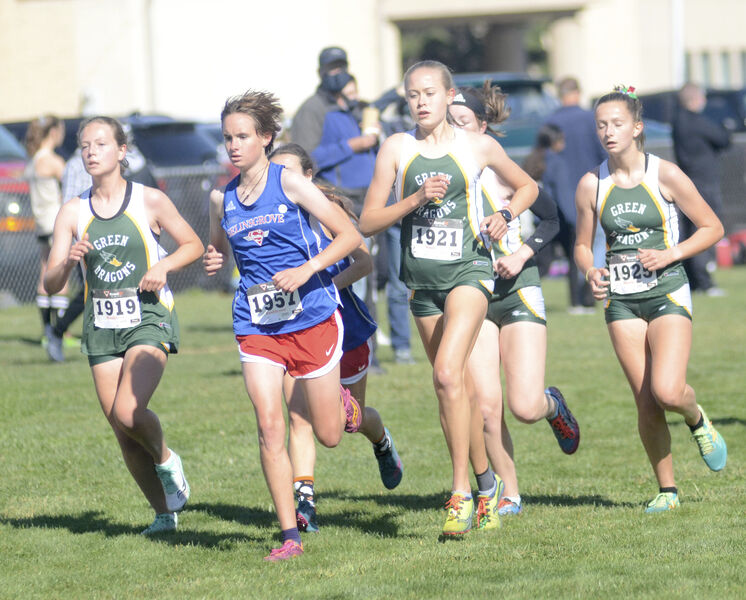 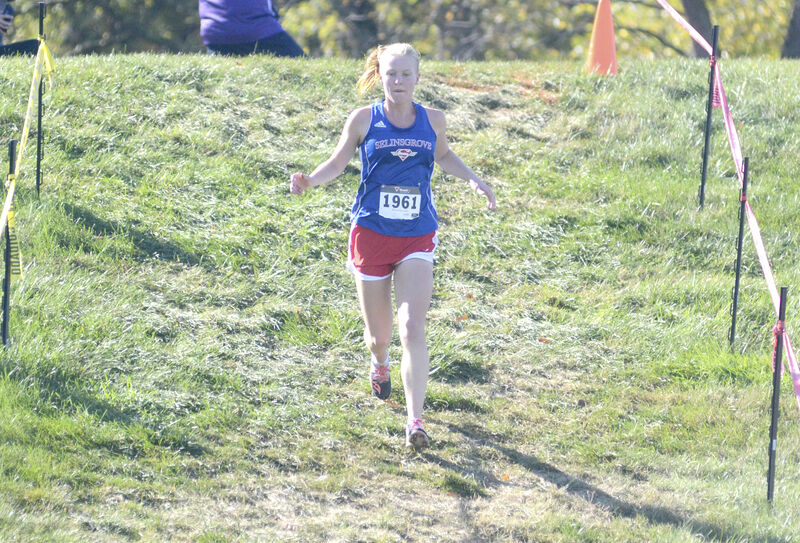 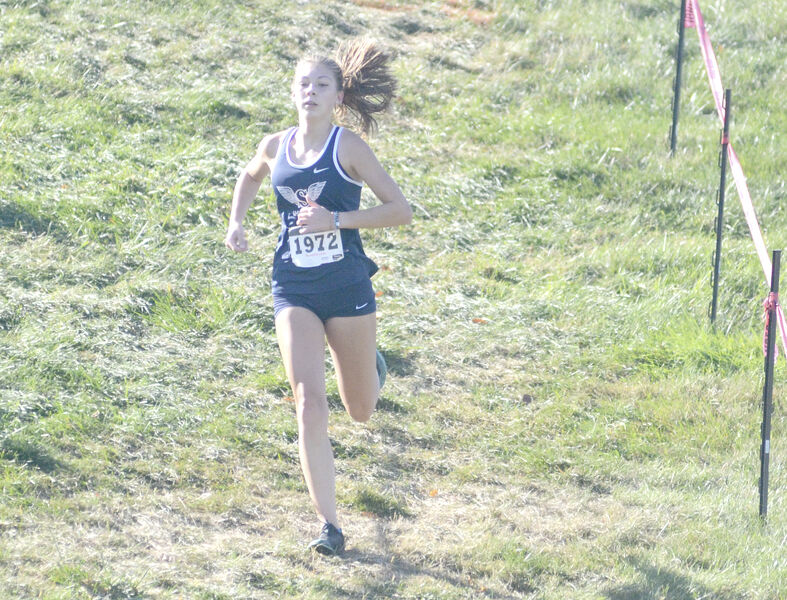 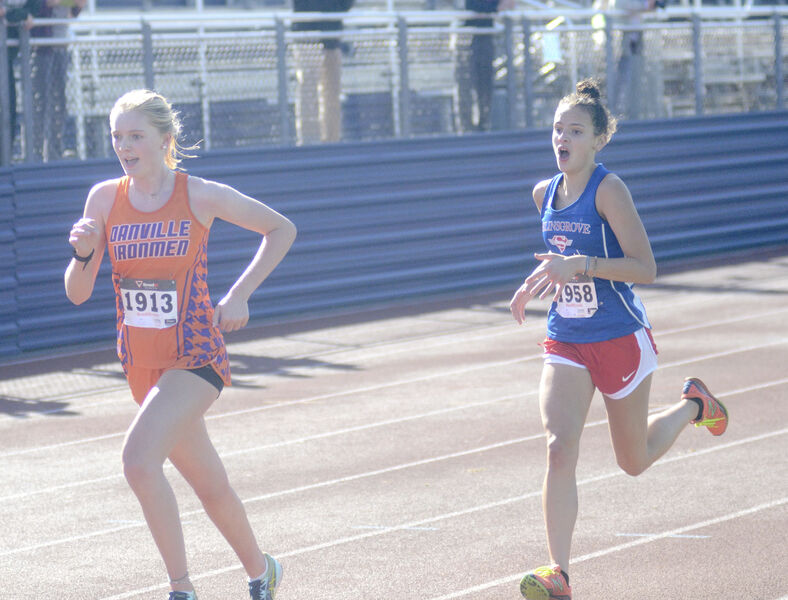 Danville's Grace Petrick, left, holds off Selinsgrove's Breia Mayes down the stretch during the Heartland Athletic Conference Invitational on Saturday.

Lewisburg's Samantha Wakeman, left, and Shikellamy's Elli Ronk battle for position in the last 50 meters of the Heartland Athletic Conference Invitational on Saturday.

Danville's Grace Petrick, left, holds off Selinsgrove's Breia Mayes down the stretch during the Heartland Athletic Conference Invitational on Saturday.

Selinsgrove finished with three in the top seven, but neither of those teams claimed the team title.

Lewisburg used a tight grouping as its top runners finished within 27 seconds of each other, and the Green Dragons won with 51 team points, one point ahead of the Ironmen. Selinsgrove was third with 54 points.

What made Lewisburg’s grouping even more impressive was the group of Green Dragons — who finished from eighth to 13th — did it in two separate races. In an effort to encourage social distancing, each team had its top three athletes compete in one race and its next four in a second race.

“With the unique format of the competition — for which I applaud Shikellamy — selecting which girls would run the first race and which the second race was nearly impossible,” Lewisburg coach Michael Espinosa said. “In the end we ran our three seniors in the first race. I am very proud of how they competed against the field while working together right to the finish. The second squad are all returning in 2021, and were up to the challenge of battling against both their competition and the times from the first race.”

Delaney Humphrey was eighth to lead Lewisburg in 20:15, six seconds ahead of Sarah Mahoney (ninth) and 16 seconds ahead of Hannah Mirshahi (10th). As for the second group of girls, Olivia Beattie won the “B” race to place 11th overall, just two seconds off of Mirshahi’s time. Samantha Wakeman was 13th in 20:42. Lewisburg’s next two runners — who did not contribute to the team total — placed 16th (Maggie Daly) and 20th (Kyra Binney) overall.

“Olivia Beattie — our top finisher at states the past two seasons — has lots of experience in big moments and is excellent at running her own race,” Espinosa said. “Her teammates were able to pack up and work off of her. It also helps that the HAC is loaded with talent and depth across the board, meaning that the second girls race also featured top-tier runners.”

No one in either race could touch Bartholomew, though.

“I was confident going into it because I know I’ve been training well this season,” Bartholomew said. “I knew what I was capable of doing. I just wanted to race calm and smart.”

Bartholomew, a junior, took the lead early and never relinquished it, finishing in 19:29, eight seconds ahead of runner-up Shaela Kruskie of Selinsgrove.

“Today is going to be a good replica of what I can do at districts, so I wanted to see what I was capable of,” Bartholomew said.

Bartholomew said she was happy to compete in a big invitational, but didn’t alter her strategy too much.

“With all of the COVD restrictions, we couldn’t go to any invitationals, so this was our first non-dual meet,” Bartholomew said. “I knew who I wanted to go out with from the different teams. I’ve been reading about them, and who I’ve raced before, so I knew who I could go out with. I really wanted to focus on myself. I wanted to push myself to my limits.”

Freshman Victoria Bartholomew was fifth in 20:13 for the Ironmen, one second ahead of senior teammate Grace Petrick.

The Seals were the only team to place two runners in the top five, but neither Kruskie nor Zoe Tomko, who was fourth, were particularly pleased with their individual performances.

“It wasn’t my best race,” said Kruskie, a freshman. “I think I could have gotten first.”

Tomko did say she was pleased with the performance of the team overall.

“That was awesome,” Tomko said. “We were really excited about (having two in the top four, and three in the top seven).

“We’ve improved a lot from last year, so we have to keep that in mind as we continue training. It was a fun race. We know what to improve on.”

Selinsgrove junior Breia Mayes, who finished seventh in 20:14, was happy with her performance.

“I felt strong,” Mayes said. “I pushed near the end, and I believed in myself.”

The only top-seven placer not from Selinsgrove or Danville was Shikellamy junior Alyssa Keeley, who was third in 19:55.

“I was actually really looking forward to today,” Keeley said. “I was excited for the competition and the weather was great.”

Keeley, who raced on her home course, said she felt she made a breakthrough.

“I’m pretty proud,” Keeley said. “This season, it’s been hard for me to break 20, so just accomplishing that this season felt pretty good.”

With the District 4 race set for Oct. 29, she said this was a good time for her to have that type of performance.

“This race definitely boosted my confidence for districts in a week and a half,” Keeley said. “I’m glad I get to race these girls again, and I hope to have another good race.”