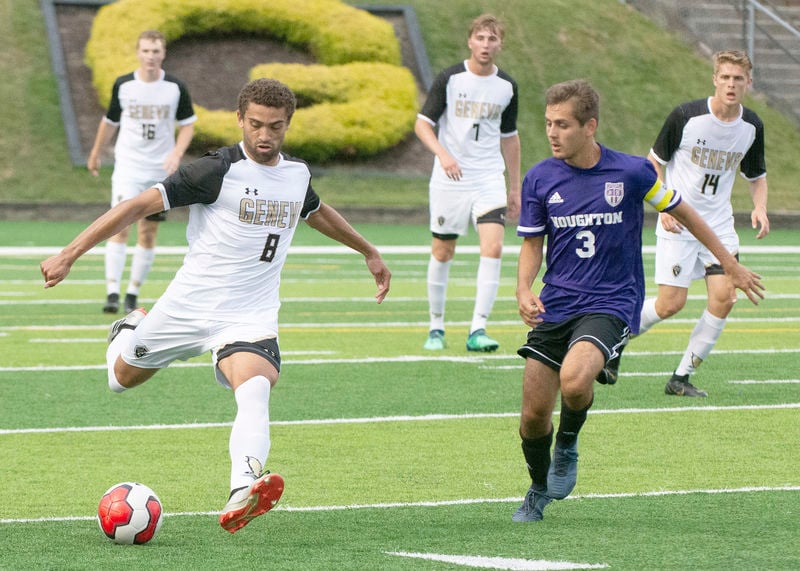 Geneva senior Devaughn Johns, a Midd-West graduate, gets ready to send the ball forward during a game against Houghton last year. 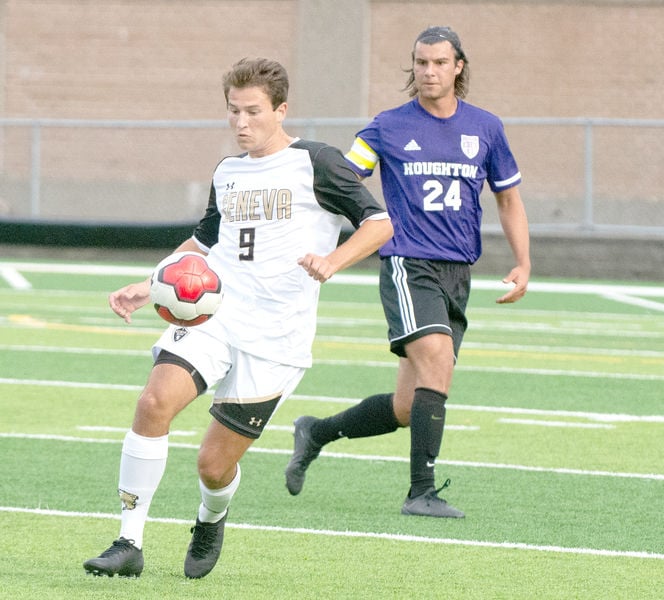 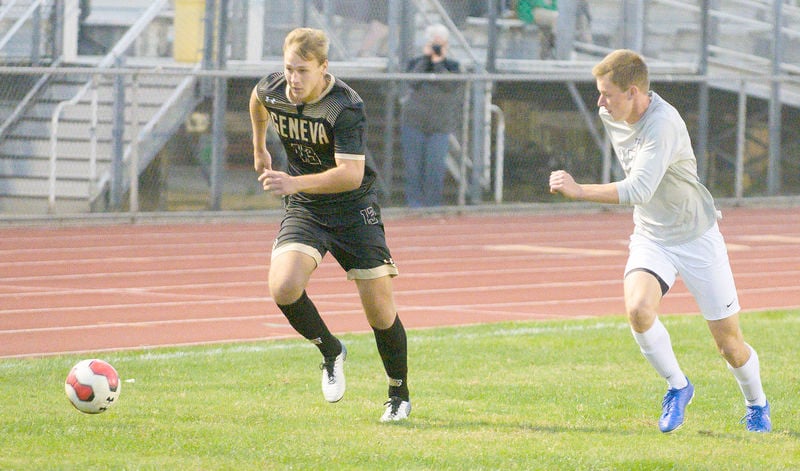 Geneva senior Devaughn Johns, a Midd-West graduate, gets ready to send the ball forward during a game against Houghton last year.

When Geneva College sent its students home due to the coronavirus pandemic, members of the men’s soccer team — including sophomore Cole Sauer and junior Alex Yoder — were armed with at-home workouts.

Sauer, a Midd-West graduate, has been doing the workouts in his backyard or driveway.

Yoder, a Milton graduate, hasn’t been able to work out.

“I went to the doctor because I was having chest pains,” Yoder said. “It turned out I have a hole in my heart. It’s one that didn’t close since I was a baby.”

Yoder said he had been dealing with the pain since he was a sophomore in high school.

“I recently told my parents when it started getting worse,” Yoder said. “They were freaking out. My mom scheduled a doctor’s appointment for spring break.

“They were worried the hole was too large and would need surgery. They did what’s called the ‘bubble test,’ where they injected saline bubbles into my bloodstream. Only some little bubbles came out of the hole, but it wasn’t enough to worry about. They said nothing should happen, but I have to be careful about strokes when I’m older.”

Yoder said he was recently given the all-clear to get back to training, which is good news not just for him, but for the Golden Tornadoes, as well. Yoder led the team with six goals as a freshman, and tied for the team lead with three last year.

“Devaughn, Cole and Alex were all big parts of what we were able to accomplish,” Geneva coach Gary Dunda said. “Throughout the season, we asked a lot of all three.”

Yoder came off the bench in 13 of 20 games he appeared in as a sophomore after a breakout all-conference freshman season.

“Freshman year was kind of easy because I came in with no expectations,” Yoder said. “I just had to show up, be myself, have fun and score goals. As a sophomore, I don’t know if I felt I wasn’t performing well, but things weren’t clicking. I got a little frustrated. I think I was a little overconfident.”

Dunda said Yoder didn’t do anything wrong, but could be more of a benefit to the team coming off the bench.

“Alex turned out to be like that instant offense off the bench,” Dunda said. “He probably played the same minutes each year, but we just brought him in a little later with his speed and quickness and attacking ability. He gave the opponents’ backline fits at times. ... He caught the attention of every teams’ scouting report for what he did as a freshman.”

Yoder said coming off the bench gave him a different view of the game.

“I got to sit back and see how the other teams were playing defense,” Yoder said. “It was easier to see holes, and I could attack differently.”

Sauer also underwent a change in his role, moving to right wing as well, as playing his traditional role of center midfielder.

“We did it for a couple of reasons,” Dunda said. “When you look at a team for the coming year, you’re trying to put the pieces of the puzzle together. And how we wanted to put the team together early, it best fit that Cole was able to move out wide.”

Sauer said it took some adjustment since he had been a center mid all his life.

“Right wing was important defensively, too, because the way we play we want to keep the ball to one side,” he said. “So we do a bunch of defensive work. … That was a little different because as an attacking center mid you’re parked in the middle the whole game. This time there was a lot more running, I guess, but it was good.”

Johns was the anchor of a Geneva defense that allowed the fewest goals in the PAC.

“We were a very stingy group, and Devaughn was a linchpin in that,” Dunda said. “His determination, along with his competitiveness and athletic ability — I’d like to say he was a man among boys.”

Dunda said Johns was the most dynamic athlete in the conference his senior season, and he was able to leverage that athleticism to make life difficult on opposing attackers.

“I don’t want shots on the net,” Johns said. “If our keeper doesn’t face shots, then the other team can’t score. I wanted to control the backline and make sure everything went smoothly. For me it was a defense-first, and then everything else came after.”

Johns was a first-team all-conference selection, and was named to the All-Great Lakes Region second team.

Johns will go from a teammate of Sauer and Yoder to one of their coaches next year.

“I’m going to be an ‘assistant assistant coach’ — that’s what I call it,” Johns said. “I’m looking at it as a way to help where I left off and give back to what I had.”

Johns said he didn’t expect the transition from teammate to coach to be too difficult.

“I talked to a few of the now-seniors to see what they thought before I took the position,” Johns said. “They were all for it.”

“I’m going to have to roll with the punches. I’m going to demonstrate that I’m there to do a job, which is to help them be the best they can be.”

Yoder said he was excited for Johns to join the staff.

“He’s going to have a different outlook on how things are going,” Yoder said. “I think it will be very helpful and he’ll bring a unique viewpoint.”

Yoder and Johns have known each other for two years.

“When he came in, I was like, ‘Dang, he can play,’” Johns said of Yoder. “I was very impressed with him.

“He’s a great guy personally. I wish I would have known him in high school. He’s that type of guy.”

Johns and Sauer have known each other for much longer.

“He was like one of my best friends growing up — middle school and high school — so it’ll be awesome,” Sauer said of Johns.

“For me and Cole, it’s more than just soccer,” Johns said. “It’s amazing that we were able to play together in high school — we were on the same club team for a while — and then in college, too.

“Everything I missed from home when I was at Geneva, went away because Cole was there — someone I consider to be my brother since middle school.”

Dunda said he expects Sauer to move back to his traditional positions next season, but a lot will depend on the preseason.

“Cole’s a good soccer player,” Dunda said. “He’s not a position; he’s a soccer player. We could put Cole anywhere and he’d be fine for us.”

Yoder said his biggest goal for next season was to get back to enjoying himself on the field, as he did as a freshman.

“He understands what we need from him,” Dunda said. “He’s learned so much his first two years, I think he’s going to be a complete handful for any defender trying to slow him down.”

Sauer, Yoder and Johns all said the expectations were high for the team next season — including winning the PAC title and reaching the NCAA tournament.

Dunda said the kind of people the three Valley players were was more important than the soccer players they were.

“These three guys are all good players, but they’re even better people,” Dunda said. “They come from three great families. They’re really good kids. And that’s kind of the staple of our program. We’re not trying to find just the best player; we’re trying to find the best person who also happens to be a really good soccer player.”