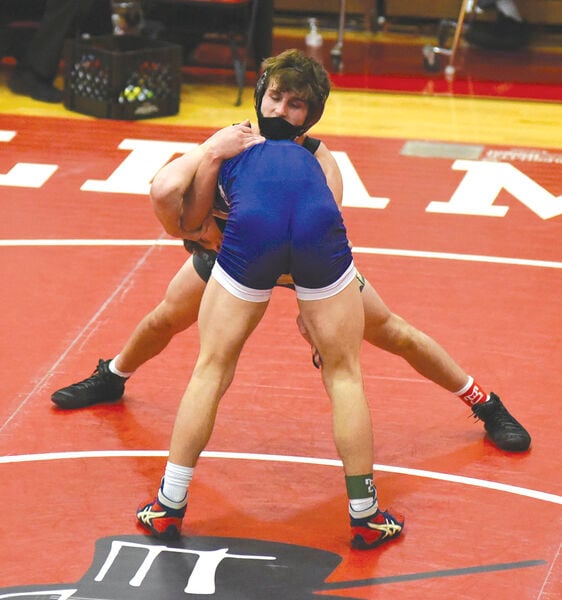 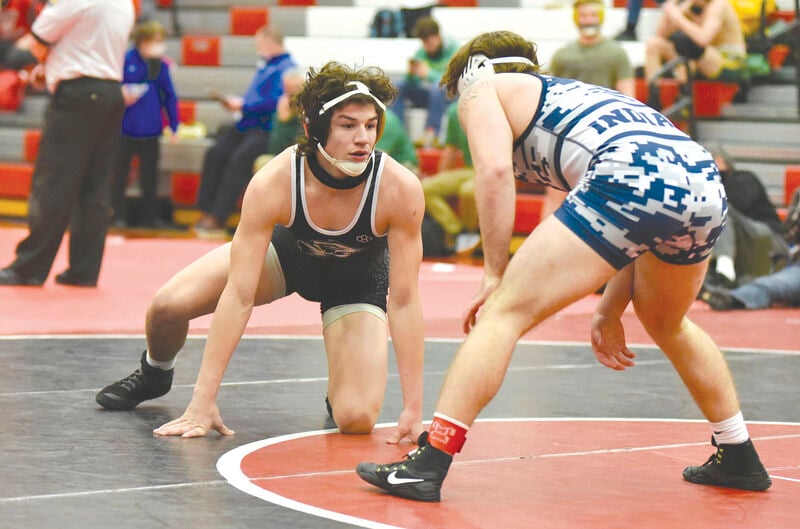 Southern Columbia freshman Garrett Garcia, left, looks for an opening to take a shot against Muncy’s Ty Nixon Saturday during the third-place match at 160 pounds at the Class 2A District 4 tournament.

Southern Columbia freshman Garrett Garcia, left, looks for an opening to take a shot against Muncy’s Ty Nixon Saturday during the third-place match at 160 pounds at the Class 2A District 4 tournament.

WILLIAMSPORT — Emmanuel Ulrich loves long matches. He got his wish and then some in Saturday’s District 4 Class 2A championship tournament.

The sophomore 285-pounder pinned 12 opponents during the season. However, in the district meet, he went the distance in all three of his matches, wrapping up his first district title with a 3-1 sudden-victory decision over Hughesville senior Caleb Burkhart.

“The long matches are the best matches. That’s what makes you better,” said Ulrich, who improved to 25-1 on the season. “That last one was closer than I would have liked. But that’s because we faced each other late in the year (Ulrich pinned him) so we pretty much knew each other.”

Ulrich was one of 29 Valley wrestlers of the 42 who qualified for the district meet to advance to next Saturday’s Northeast Regional Tournament, also at Williamsport High School. The top three from there will move on to the first-ever Super Regional in Pottsville.

Southern Columbia won another district title, with 173.5 points, and, as coach Kent Lane predicted coming in, the Tigers qualified all nine for the regional event.

“We were really confident. We like where we’re at right now as a group,” Lane said. “We like our match-ups, and our effort was amazing.”

Winning silver medals were Southern’s Patrick Edmondson (145) and Wes Barnes (189), Midd-West’s Avery Bassett (160) and Lewisburg’s Kaiden Wagner (132), who lost a decision to Leshock in the final.

Ulrich and Burkhart spent most of the match tying up and working for opportunities for throws. Ulrich escaped in the second, and Burkhart got out in the third. Late in regulation, Ulrich went for a throw near the edge of the match and both wrestlers landed out of bounds.

“I was confident. I have a very good mat sense. I know where I am most of the time and I trust in my abilities,” Ulrich said of that third-period situation. “I felt it and I tried it. I thought had a little bit more room. I definitely wish I could have got the two. It would have been a lot easier, but, a win’s a win, and I’m going on to regionals.”

Ulrich wasted no time getting the takedown in sudden victory, even though he said he was nervous.

Barvitskie continued to wrestle more like an upperclassman than a freshman. Taking on top-seeded Ethan Kolb, of Benton, in the final, he scored an early takedown and went to work with a power-half trying to build on the lead. Unable to turn Kolb, Barvitskie gave up an escape, and that was the end of the scoring in a 2-1 win.

Barvitskie, who improved to 14-0, said what has made him wrestle so well is not only his previous experience but “working in the room with Kole Biscoe every day.”

He said the first takedown was key.

“All the nerves went away when I took him down and I just started wrestling my way,” Barvitskie said.

“He unfortunately beat me last week, and I think it was because I definitely wasn’t ready for his speed on his feet because he is very fast,” Leshock (29-6) said. “I worked on that all week in practice to make sure I could get down and block that off.”

He took Wagner down and added two nearfall points for a 4-0 first-period lead, and added a takedown in the third.

Gavin Garcia scored the first seven points of his final against Muncy’s Ethan Gush, and added a late reversal for a 9-2 win.

“I was on top and I tried to open him up,” Garcia said. “I got in a sticky situation and got caught, but then I got a reversal.”

Garcia had not wrestled Kolb before, but several of his teammates had.

“Credit to him, he’s a solid wrestler,” Garcia added. “He is always giving our guys quality competition.”

Eight from the Valley were eliminated, including four in the one-and-done preliminary round. They were Brody Long (113) and Lane Schadel (126), both of Line Mountain, Milton’s Avan Ayala (189) and Mifflinburg’s Quentin Doane (215). Ayala was injured just seconds into his preliminary bout with Derek Atherton-Ely of Canton, defaulting in 19 seconds.

Milton coach Josh Anspach saw two of his wrestlers, both seniors whom the thought would have had a good chance of placing, eliminated with injury default losses.

It happened early as Ayala was injured in the opening seconds of his preliminary at 189, then, in the blood round, needing to win to advance, Valladares lost by injury default.

“(Ayala) was in on a shot and tried to get to the corner to lift,” Anspach said. “The kid stepped over his leg and kind of fell backward on his ankle, and his he went backward his leg kind of got stuck on the mat and rolled over (Ayala’s ankle).”

Valladares’ injury with Valladares leading 4-2, when he and Springman shot at the same time and collided.

Anspach said it looked like Springman’s knee hit Valladares’ head, and the official would not let him continue.

“They both got injured being aggressive, so you can’t complain about that,” Anspach said. “Overall, the guys wrestled very well.”

Anspach noted that sophomore 285-pounder Nolan Loss just recently made the lineup and wrestled well in his blood-round loss (12-6) to the much more experienced Treibley.

Mount Carmel also saw a wrestler lose by default, ironically to Milton junior Nathan Rauch in the third-place match at 215. Both wrestlers qualified for the regional.

Four others were eliminated in the consolation quarterfinals, including Line Mountain senior Bryce Carl, who entered the tournament at 32-0, the No. 2 seed at 152. He was pinned in the quarterfinals by Central Columbia’s Troy Johnson, then lost 6-5 in his first consolation to Nick Woodruff, of Wyalusing.

*-Sullivan County penalized one team point for unsportsmanlike conduct on the coaching staff.

(Both advance to Northeast Regional tournament)

(Both advance to Northeast Regional tournament)