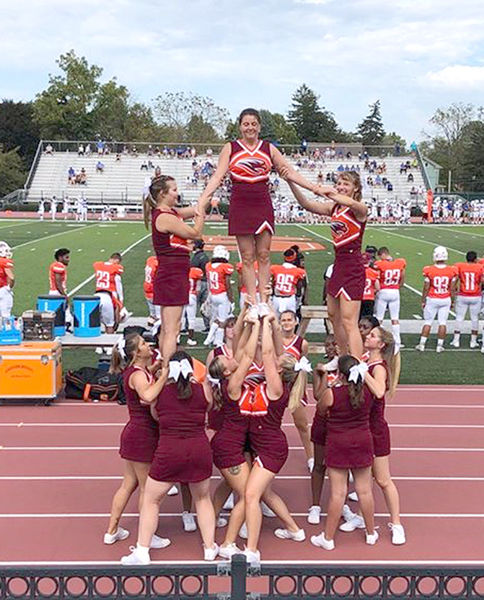 Danville graduate Brooke Weaver, right, spots during a stunt the Susquehanna cheerleading squad did during a football game last year.

Brooke Weaver, a Danville graduate, gets ready to cheer before a Susquehanna football game last year. 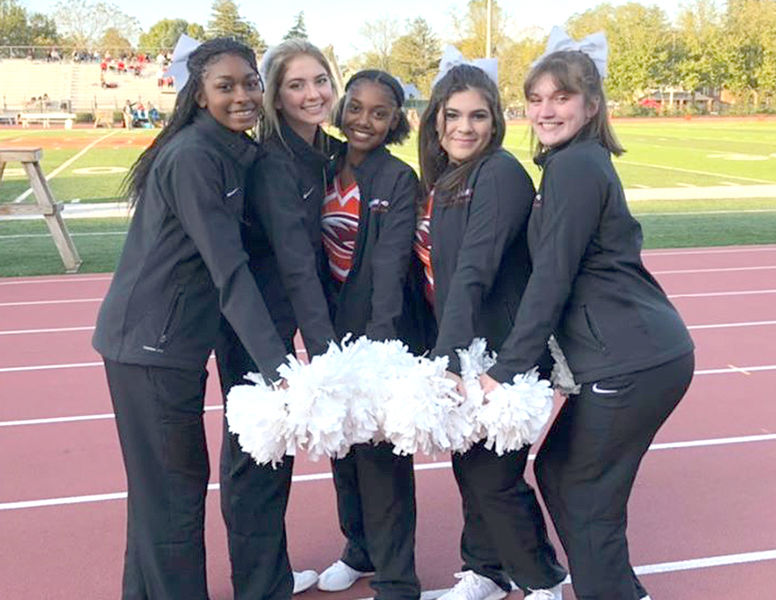 Brooke Weaver, second from left, poses with the other freshmen on the Susquehanna cheerleading team last year.

Danville graduate Brooke Weaver, right, spots during a stunt the Susquehanna cheerleading squad did during a football game last year.

Brooke Weaver, a Danville graduate, gets ready to cheer before a Susquehanna football game last year.

Brooke Weaver, second from left, poses with the other freshmen on the Susquehanna cheerleading team last year.

Brooke Weaver was looking forward to having an in-person tryout for the Susquehanna cheerleading team this spring.

Unfortunately for the Danville graduate, the tryouts were held online due to the coronavirus pandemic. Weaver once again had to go through the process virtually, as incoming freshman always try out online.

“I’m a rising sophomore so I had to do the same exact thing as a freshman,” Weaver said. “It’s hard. I’m not made for online learning. Watching on the screen, the moves for the dances that I needed to learn took me a lot longer than it would have in person.”

Still, Weaver was selected to be a River Hawk cheerleader for the second straight season.

“Oh my gosh, I loved it,” Weaver said of her freshman year cheering at Susquehanna. “It was so great. It was definitely the people that made it so fun. Our team had such a great bond last year. Coming in as a freshman, I was scared, but everyone made me feel so welcomed.”

Weaver, who cheered all four years at Danville, said she wanted to continue being a cheerleader when she entered college last year.

“I knew it was something I wanted to do, but I was still nervous because I was going into college and didn’t know what to expect,” Weaver said. “I was able to balance it all, and I had a lot of fun.”

The online tryout process went a bit more smoothly for Weaver this time around.

“It was a little bit easier,” Weaver said. “I knew how to put it together, but I had to learn new material. It took about as long.”

Susquehanna cheerleading coach Collette Bender said she thought the online tryouts may have been beneficial to some of the cheerleaders.

“The girls pretty much had to teach themselves what they needed for the tryout,” Bender said. “One advantage to this way is they could learn at their own pace. Because they were teaching themselves, I gave them a week to do it. They could rewind and press play as many times as they needed to.”

Weaver said a lot more goes into being a cheerleader than the finished product people see on the sidelines on Saturday.

“I definitely think it’s harder than it looks,” Weaver said.

The team practices twice per week, eats dinner together and has team bonding on Friday nights and Saturday mornings.

“That is what’s required, so anything else you want to put into it is up to you,” Weaver said. “I like stretching, so I try to do that everyday. Then I try to go to the gym two or three times per week.”

Bender said she was pleased with what the team was able to accomplish last year, especially with a lot of changes in the squad.

“Brooke stood out as someone who had that experience. She picked things up easily; she knew what to do; and she’s a great student.”

Weaver said the way the team came together was what helped them succeed.

“From what I’ve noticed — being on so many teams — the team bond is what really matters,” Weaver said. “We do level-six pyramids, which take every single member of the team. If one person isn’t paying attention or doesn’t feel confident, it’s not going to work. ... For stunts especially, you need too have a good relationship and everyone needs to be on the same page.”

Weaver said one additional bonus of being a cheerleader was getting a good view of the field, which was especially good last year when the River Hawks went 10-1.

The River Hawks scored 66 touchdowns last year, and Weaver was pleased with all the scoring.

“I love whenever we scored a touchdown ... and they played the touchdown song,” Weaver said. “I like the dance; it’s fast-paced and fun to do.”