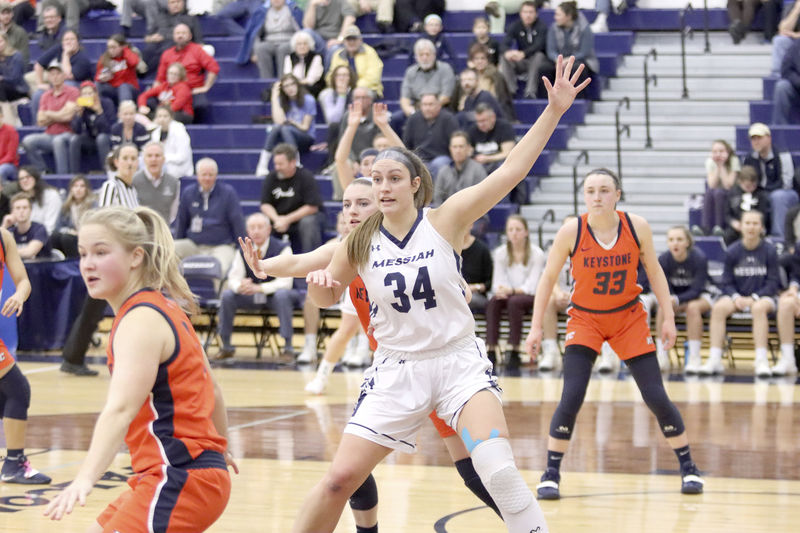 Messiah sophomore Megan Zimmerman, a Warrior Run graduate, posts up during the Falcons’ win over Keystone in the NCAA Division III tournament. 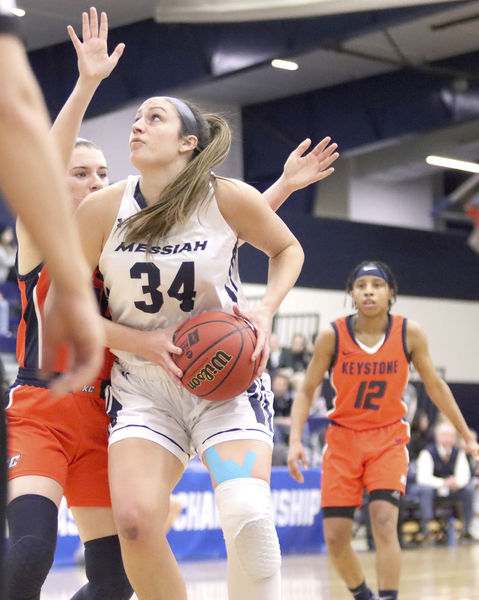 Messiah’s Megan Zimmerman gets ready to shoot for the Falcons during the NCAA Division III tournament.

Messiah sophomore Megan Zimmerman, a Warrior Run graduate, posts up during the Falcons’ win over Keystone in the NCAA Division III tournament.

Messiah’s Megan Zimmerman gets ready to shoot for the Falcons during the NCAA Division III tournament.

Megan Zimmerman dominated at the start of her sophomore season with Messiah women’s basketball last November.

“I had the opportunity to play an increased role, and I really wanted to step up,” Zimmerman said. “To start on a high note was really rewarding.”

The next day, the 6-foot-2 forward recorded a double-double with 17 points and 12 rebounds and was named the MVP of the Messiah Tip-Off Tournament.

“That was wonderful,” Messiah coach Mike Miller said. “She performed the way she practiced, which not everyone can do. I think that turned her into a veteran overnight.”

As a freshman, Zimmerman played mostly a reserve role for the Falcons. She averaged 4.1 points and 3.4 rebounds per game, though she appeared in all 29 games (with 11 starts) to help Messiah reach the NCAA Division III Sweet 16.

“It was definitely a huge learning curve in my first year as a college athlete,” Zimmerman said. “Having that experience really helped. I had the opportunity to work with All-American Alecia Rohrer, and she was a mentor to me. She really helped me improve areas of my game that I wasn’t as developed in.”

Rohrer graduated in 2019 as the 22nd Messiah women’s basketball player to score 1,000 points and the first to grab 1,000 rebounds. From Zimmerman’s perspective, Rohrer’s intangibles rubbed off more than anything on the court.

“Alecia, as a senior, was one of the most remarkable people,” Miller said. “It wasn’t just Megan, but there was a group of freshman forwards — and she took them under her wing. She showed them the work ethic and dedication needed to succeed at this level. That really benefited me, and I’ve already watched Megan do that with this year’s freshmen.”

Zimmerman said she wanted to continue to work on her leadership.

“We have a really talented group of freshmen coming in. I want to be an example and a leader for them,” Zimmerman said.

On the court, the work paid off for Zimmerman and the Falcons. Despite being limited by a knee injury, Zimmerman doubled her scoring output. She averaged 8.2 points and 6.2 rebounds per game.

“After (Rohrer) graduated, I saw my sophomore year as a great opportunity to put into practice the things I learned from her,” Zimmerman said. “It was definitely rewarding to have a successful sophomore season.”

The Falcons’ season was cut short by the coronavirus pandemic.

“It was tough,” Zimmerman said. “It was super-hard for the season to end so abruptly. There was no closure. We were in Boston, had already had a practice, and were ready to compete in the Sweet 16.

“The team did a good job of not letting that take away from our other successes and the success of reaching the Sweet 16 again. We looked at it as God had a greater purpose than us playing in that game. There was a rewarding feeling of at least making it there and accomplishing a lot of the goals we set.”

After Messiah practiced for its Sweet 16 game, the team was getting ready for dinner when Miller got a call that informed him the rest of the tournament was canceled.

“It was an interesting thing,” Miller said. “On the plus side, it’s the first time in 20-plus years I’ve ended on a win because I’ve never won a national championship, but it was hard.

“For the first hour and a half or so, there was a lot of crying and being upset. By the time the night ended — and that’s what makes this group special — there was nothing but laughter and remembrances of the season.”

Zimmerman said she focused on physical therapy to be fully recuperated for her junior season, but she was still working on her game.

“I try to get some shots up when I can and do some ballhandling,” Zimmerman said. “I try to touch the ball every day.”

She said she had a lot of things she wanted to improve for next season, but Miller said the biggest thing was Zimmerman staying healthy for a full season.

“She is there,” Miller said. “Unfortunately, she was really dinged up with injuries and that limited her. She couldn’t stay where she was at when the year started. I want to see her just stay healthy. If she’s healthy, she will dominate.

“Now she’s confident. She believes in the program and what we’re doing here. She knows she has a higher purpose, so she just goes about her business. I don’t need to see anything more from here. I’m excited to see what she can do in the next two years and the next 60 games.”