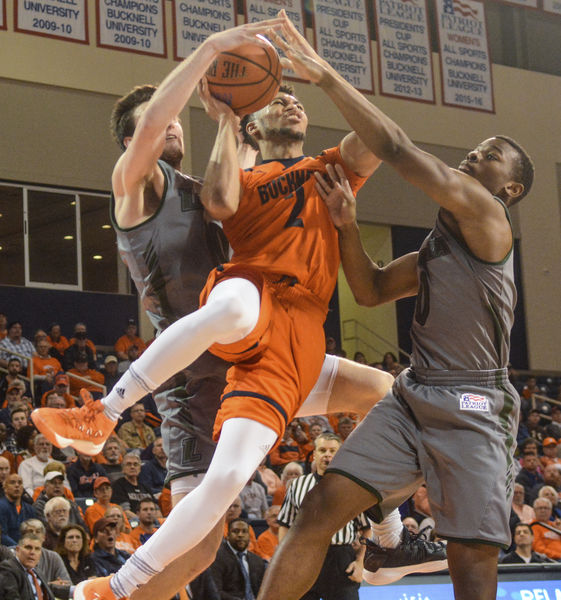 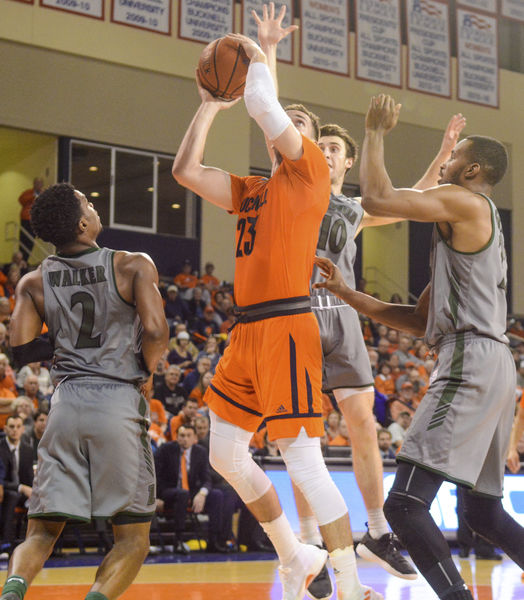 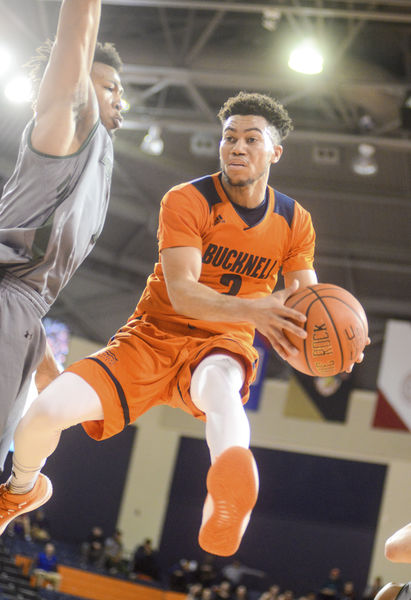 Bucknell's Stephen Brown passes in the air while being guarded by Loyola's KaVaughn Scott during Thursday's Patriot League quarterfinal game in Lewisburg. 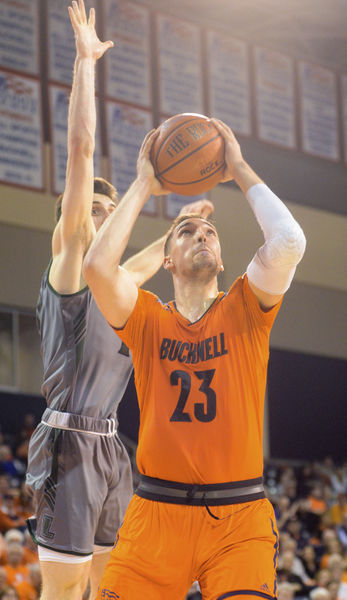 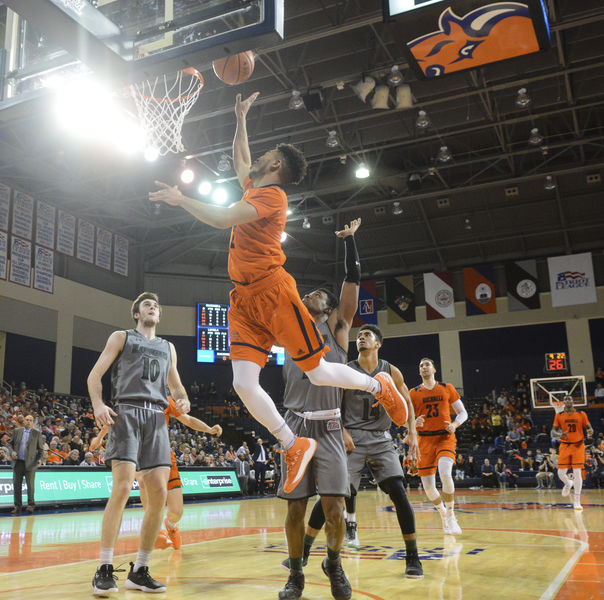 Bucknell's Stephen Brown passes in the air while being guarded by Loyola's KaVaughn Scott during Thursday's Patriot League quarterfinal game in Lewisburg.

LEWISBURG — At this time of the college basketball season, it doesn’t matter how the game actually plays out or how many points one manages to win by.

All that matters is emerging with that elusive result — and when the final buzzer sounded, Bucknell’s Bison were the ones celebrating yet another victory.

Unable to shake a Loyola (Md.) squad playing to extend its season one more day, top-seeded Bucknell finally turned back the feisty Greyhounds 83-78 in the quarterfinal round of the Patriot League’s postseason tournament before nearly 2,500 fans Thursday night.

Nathan Davis’ squad will return to Sojka Pavilion for Sunday’s semifinal (2 p.m. tip) against No. 5 Boston University, an 88-82 victor Thursday night at Lehigh.

Zach Thomas banked 27 points — the final two coming on a pair of freebies with 0.3 seconds to play and his nose stuffed with cotton in an attempt to halt some bleeding — and grabbed 11 rebounds as the Bison (23-9) won their sixth game in a row.

Thomas’ 27-point performance, his 17th outing this season of 20 or more points, made him Bucknell’s single-season record holder in that category.

Foulland also recorded five of Bucknell’s 10 blocked shots, the first time since the 2000 that the Bison reached double digits in rejections.

Andre Walker’s 17 points led a handful of players in double figures for Loyola (9-22), which led briefly in the first half. While Bucknell led by as many as 12 points late in the first half, the game was a one-, two- or three-possession contest the rest of the way.

Every time the Bison appeared to be ready to really open things up — the last of Mackenzie’s four treys handed Bucknell a 62-53 lead with just over seven minutes remaining — No. 8 Loyola kept finding ways to keep things interesting even though the home side canned 15 of its 21 freebies from that point on.

Including nine straight in the final 41.8 seconds.

“I’ve got to give Loyola a ton of credit,” Davis said. “They came in here, they fought hard, they played hard, they never quit. They kept fighting back, played with a lot of confidence and they made it tough. That’s what we knew it was going to be.

Loyola pulled within four (65-61) on Isaiah Hart’s put back with 3:30 to go, but Thomas’ short fadeaway from the paint and Brown’s jet-propelled burst with a Foulland outlet resulted in a slick finish at the rim with 2:45 to go made it an eight-point game.

“Obviously, we would have wanted to separate a little bit more, but as coach said it’s March and they’re bringing their best, they played well,” Mackenzie said. “They gave us a little bit of trouble getting it in the paint, but we did what we had to do.

“We got a win and we’re still playing. That was our goal.”

G.G. Smith’s ‘Hounds actually pulled within three (81-78) on an Andrew Kostecka 3-ball with 1.7 seconds remaining — two seconds after Thomas and Brown collided under the Loyola hoop, causing the Patriot League’s player of the year to spill blood — but they could not turn the Bison over and launch a potential game-tying look.

Thomas was fouled in the corner with 0.3 to play and, after a look at some video and some discussion amongst the officiating crew, he finally stepped to the line.

Moments later, after canning a pair, Bucknell’s date in the semis was ensured.

“That’s all that matters.”