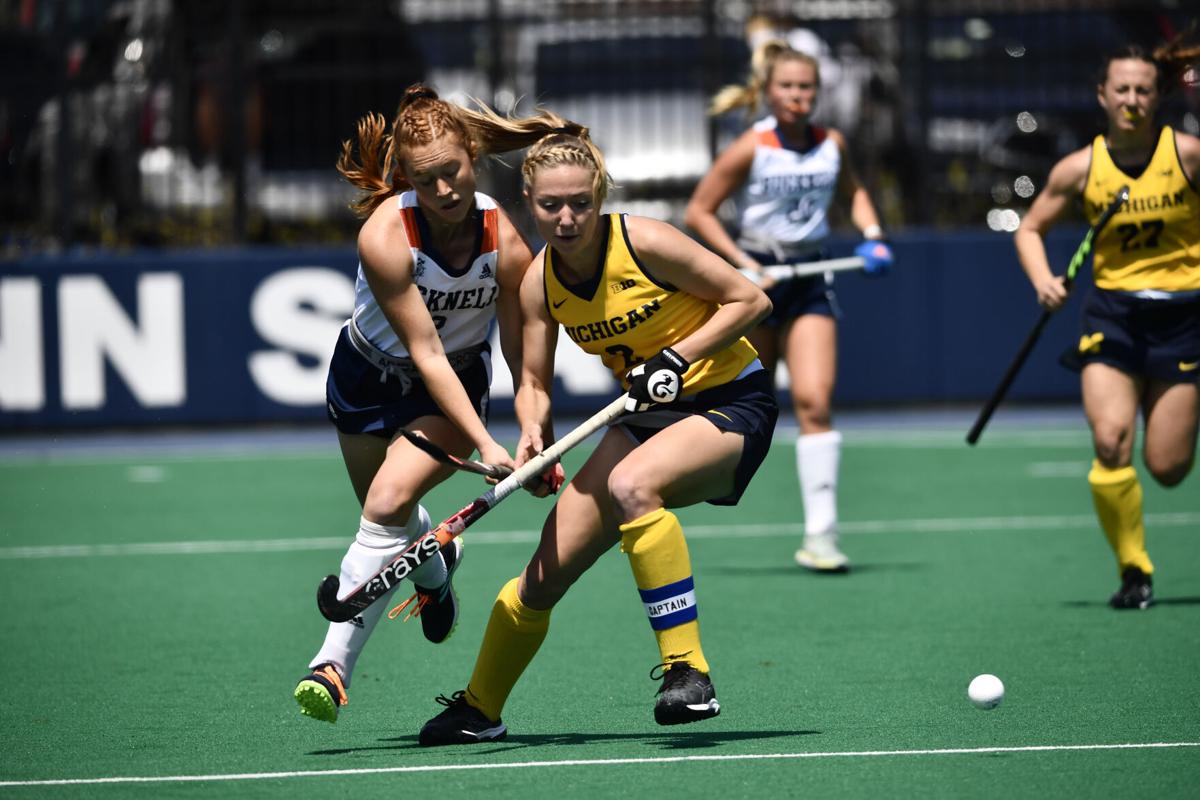 Bucknell’s Megan Keeney, left, battles with the University of Michigan’s Clare Brush on Sunday at Penn State in the NCAA Tournament. 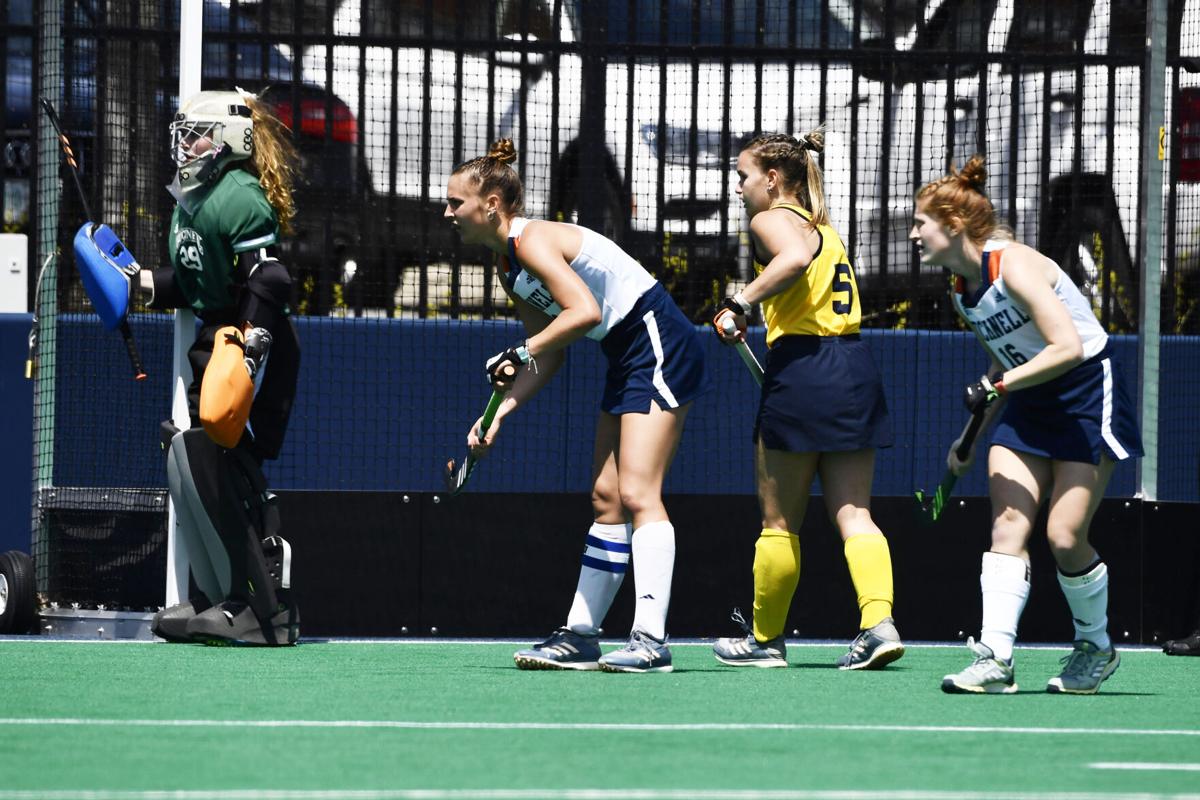 Michigan and Bucknell set up for a corner Sunday’s NCAA Tournament game at Penn State University.

Bucknell’s Megan Keeney, left, battles with the University of Michigan’s Clare Brush on Sunday at Penn State in the NCAA Tournament.

Michigan and Bucknell set up for a corner Sunday’s NCAA Tournament game at Penn State University.

UNIVERSITY PARK — For most of the first half of Sunday’s NCAA field hockey tournament quarterfinal, No. 2 Michigan had possession of the ball in Bucknell’s half of the field.

However, the Bison defense kept the Wolverines out of the middle and made things tough on their attackers.

With just more than one minute to play in the half, Michigan’s Katie Anderson broke through the middle of Bucknell’s defense and ripped a shot from just inside the circle that found the bottom corner of the cage.

“Our defensive philosophy is a mantra we use in practice, ‘They can’t score from there,’” Bucknell coach Jeremy Cook said. “We try to force them wide, force them to do extra work to get in goal-scoring position. We made one mistake we couldn’t recover from in that first half. Michigan is such a good team they were able to take advantage of that.”

That opened things up a little for Michigan, which added a goal off a corner less than three minutes after halftime as the Wolverines grabbed a 2-0 win to reach the Final Four.

“Any time you’re playing in the Elite Eight with both teams vying for the Final Four, it’s going to be a battle,” Michigan coach Marcia Pankratz said. “Bucknell had a super game and a super season.”

Michigan (14-2) had six first-half shots, and Bucknell goalkeeper Clara McCormick stopped a pair. Despite controlling much of the game, the Wolverines were unable to get many good shots.

“I was so happy with how we played,” Cook said. “We brought the intensity that I was hoping for. Before the game, we were hoping to disrupt them a little bit and play a style that they weren’t used to. ... I was so proud and so happy for them. We had a great performance.

“We worked our butts off. We really worked hard. I could not be happier with the work rate of the team.”

A great individual effort by Anderson changed things. The Bison (6-4) had previously been able to push everything wide or surround any Michigan player with the ball in the circle. Anderson got the ball about 12 yards outside the circle, split a pair of Bucknell defenders and ran straight to goal in the middle of the field.

“Katie is such a crafty, clever player,” Pankratz said. “We have tactics, of course, but sometimes you just have to use your talent and great decision-making. She certainly did on that one.”

That play seemed to calm the Wolverines, who Pankratz said were tight in their first NCAA tournament game. Michigan had a first-round bye, while the Bison defeated VCU in double overtime on Friday.

“We were relatively anxious,” Pankratz said. “We made things more complicated than we needed to, but Bucknell was a big reason for that. They press hard, and they played a really great game.”

Kathryn Peterson scored 2:34 into the third quarter off a scramble after Bucknell stopped Michigan’s initial attack on a penalty corner.

The Bison had chances to score. Bucknell had a pair of second-half corners, had a pair of shots go just wide and had Emily Doyle’s shot on goal saved.

“We all wish we could have gotten a goal,” Cook said. “We had a couple corners that we didn’t execute to our normal standard. But we’re still super thrilled that we were able to put together a performance worthy of Bucknell, and that we represented ourselves well.”

Michigan advances to the Final Four next Friday, which is hosted by North Carolina. The top-seeded Tar Heels will also be playing Friday after beating Stanford 2-0. Lewisburg graduate Cassie Sumfest scored and Greenwood graduate Paityn Wirth had an assist in North Carolina’s win.

“We knew Bucknell would give everything they had, and they certainly did,” Pankratz said. “We’re thrilled to be moving on.”

“It’s absolutely awesome,” Cook said. “Obviously our normal springs aren’t this competitive. To have this much competitive success, and this many competitive opportunities is an absolute joy.”

Cook said that was his main message to the team.

“We had a quick get-together right after the game, and they know how proud of them that I am,” he said. “They feel the same. They were really happy with themselves.”