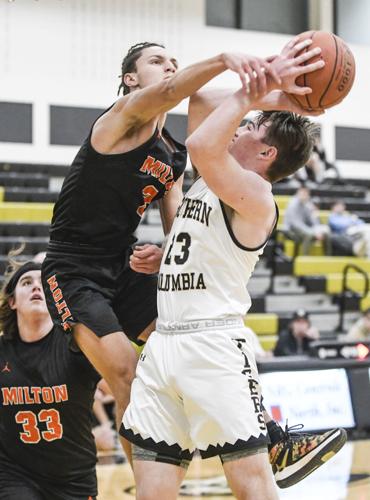 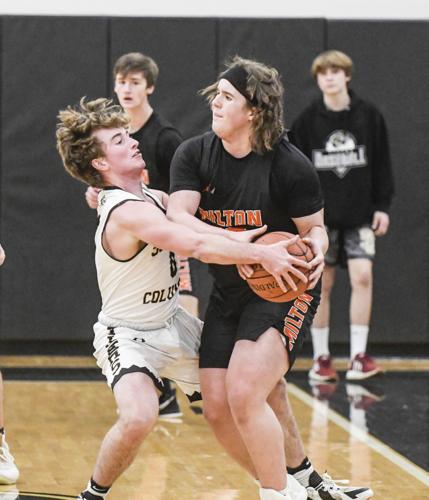 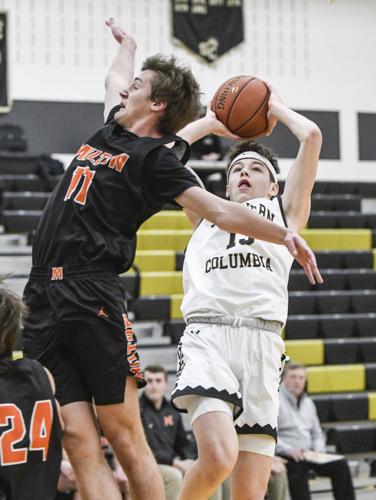 Southern Columbia’s Brian Britton tries to get a shot off in the paint over Milton’s Carter Lilley during Tuesday’s game.

Southern Columbia’s Brian Britton tries to get a shot off in the paint over Milton’s Carter Lilley during Tuesday’s game.

CATAWISSA — Milton coach Ryan Brandt has been looking for a signature win after three seasons at the helm of the Black Panthers.

"We haven't won any games (since I've been here) where everything hasn't gone right," Brandt said.

Milton rallied from a double-digit deficit late in the third quarter thanks to its defense and some timely foul shooting as the Black Panthers picked up a 50-43 victory over the Tigers at Charles Nesbitt Gymnasium.

"Gritty win, that's what that was, and that is not something that we've had since I've been here," Brandt said. "(Tuesday night), it didn't go right for three quarters, but we stayed focused and stayed aggressive."

"We didn't play as well as we had been in this game," Milton senior guard Austin Gainer said. "It really gives confidence when we can hang with a team when we aren't playing our best, and still win the game."

The Black Panthers (7-4 overall, 5-2 HAC-II) trailed 37-26 with less than a minute left in the third quarter when Liam Klebon knocked down a jumper for the Tigers. Ashton Krall had a putback late for Milton to get the lead to fewer than 10 to start the fourth quarter.

Gainer opened with a 3-pointer and hit 3-of-4 foul shots for the first six points of the final stanza, and Gainer's two foul shots with six minutes left in the game drew Milton within 37-34.

"Heading into fourth quarter, we knew weren't playing with the intensity that we capable of," Gainer said. "We were down a decent amount of points. We knew we had to come out firing."

Xzavier Minium got into the lane and found Dale Mitchell for an easy layup with 5:34 left, cutting the Southern Columbia lead to 37-36.

Mike Szido answered with a 3-pointer for the Tigers to push the score to 40-36 with 5:24 left, but that was the lone field goal of the final stanza for Southern Columbia. Milton limited the Tigers to 1-of-13 shooting from the floor in the fourth quarter and 5-of-29 in the second half.

"We try to say play defense first, and let the offense come. I think we were better offensively (in the fourth quarter) because we picked up our defensive intensity," Brandt said. "Through the first three quarters of the game, the things we wanted to do defensively we weren't doing. We weren't in the right positions; we weren't focused on that end."

Minium added, "Defensively, we just weren't quite there (in the first three quarters). When we picked up the intensity, it just made the game a little easier."

Minium picked up screen on the next Milton possession and knocked down a 3-pointer to get Milton back to within one. Jace Brandt hit two foul shots to give Milton a lead it wouldn't relinquish, 41-40.

Minium hit his second 3-pointer of the quarter, Brandt knocked down two foul shots, and Minium hit 1-of-2 foul shots with 1:04 left put the Black Panthers up 47-41.

Klebon was then fouled on a 3-pointer and hit two of three foul shots to pull the Tigers within four, but Minium countered by sinking three of four foul shots in the final 44 seconds to seal the victory.

Minium finished with a double-double, posting 18 points and 11 rebounds with four assists. Jace Brandt's hot shooting kept the Black Panthers in the game in the first half. He scored 11 of his 17 in the opening half, including all three of his 3-pointers. Gainer chipped in nine points.