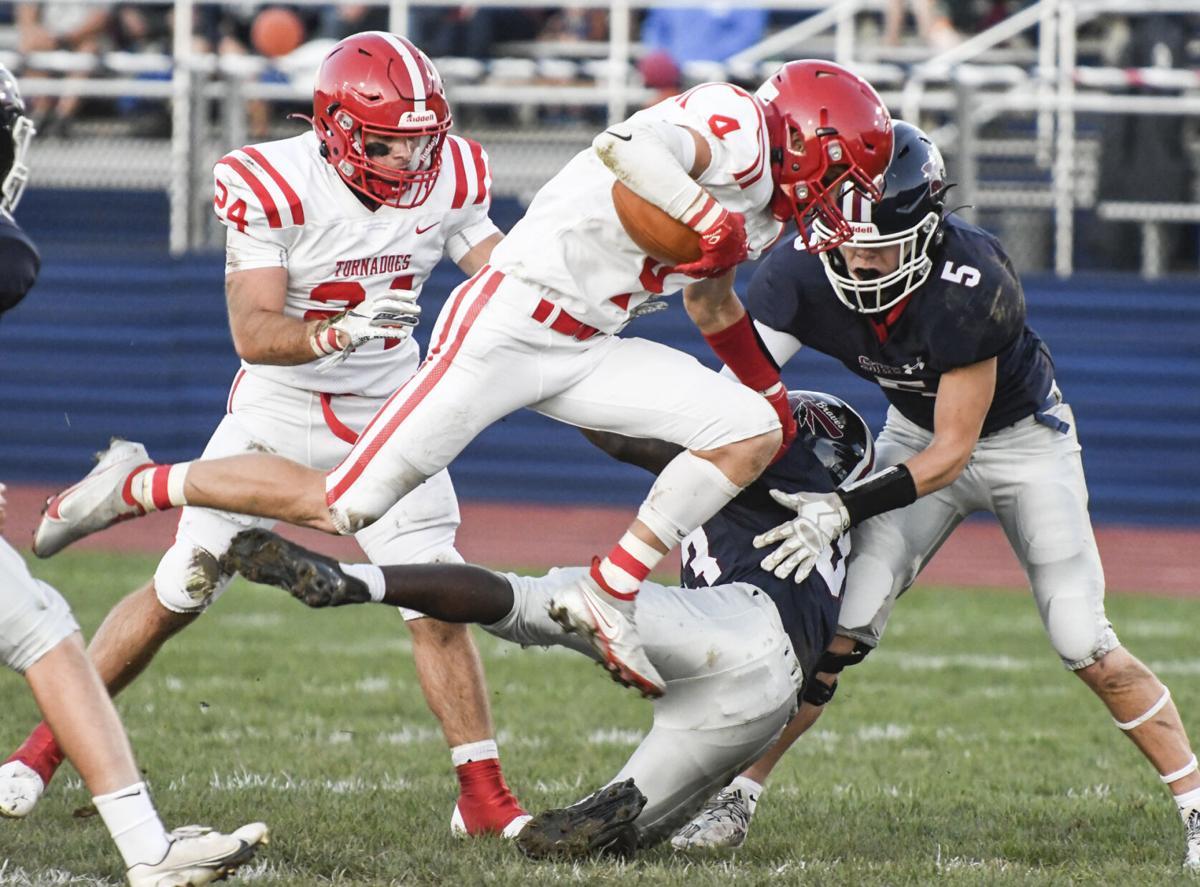 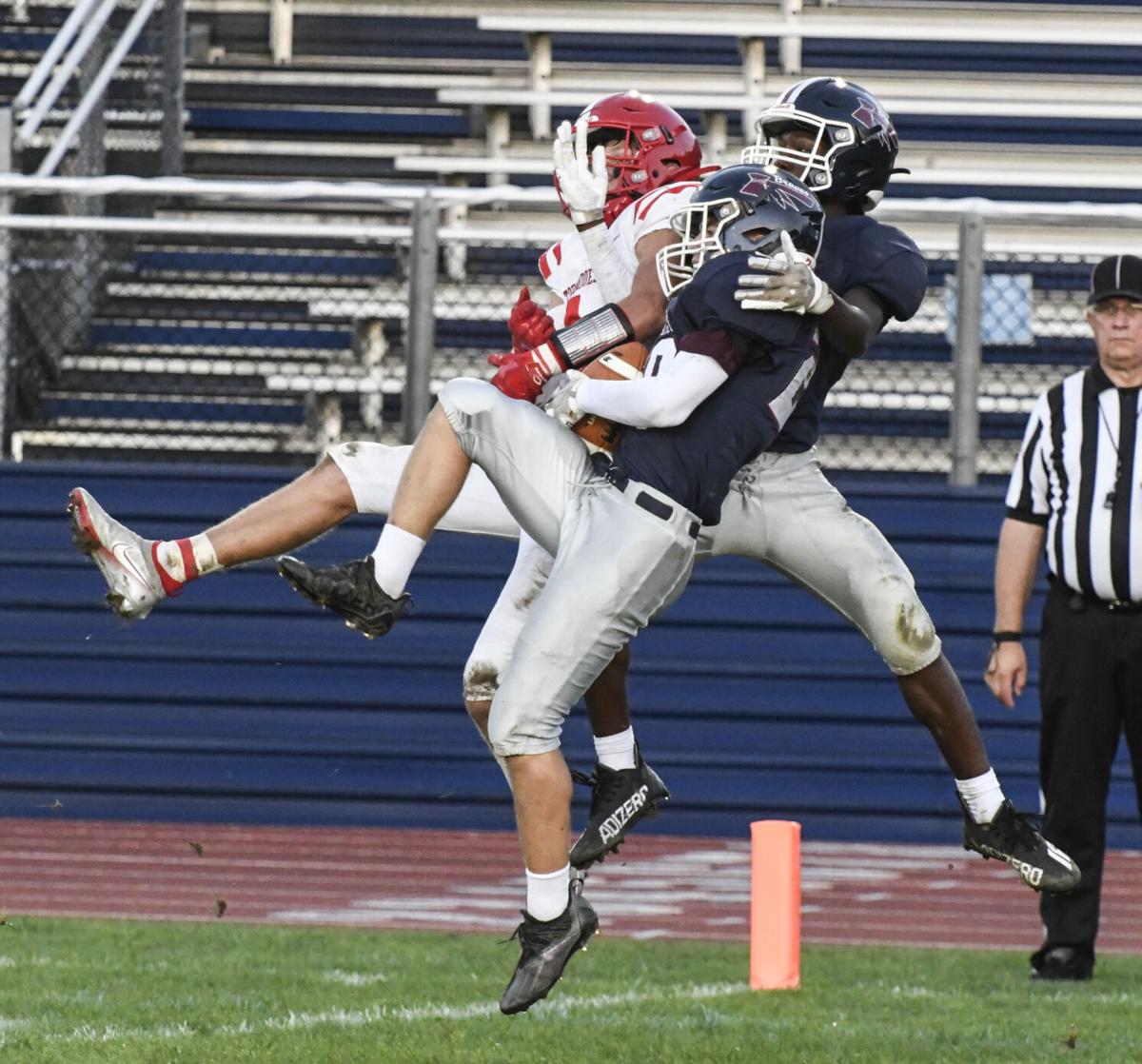 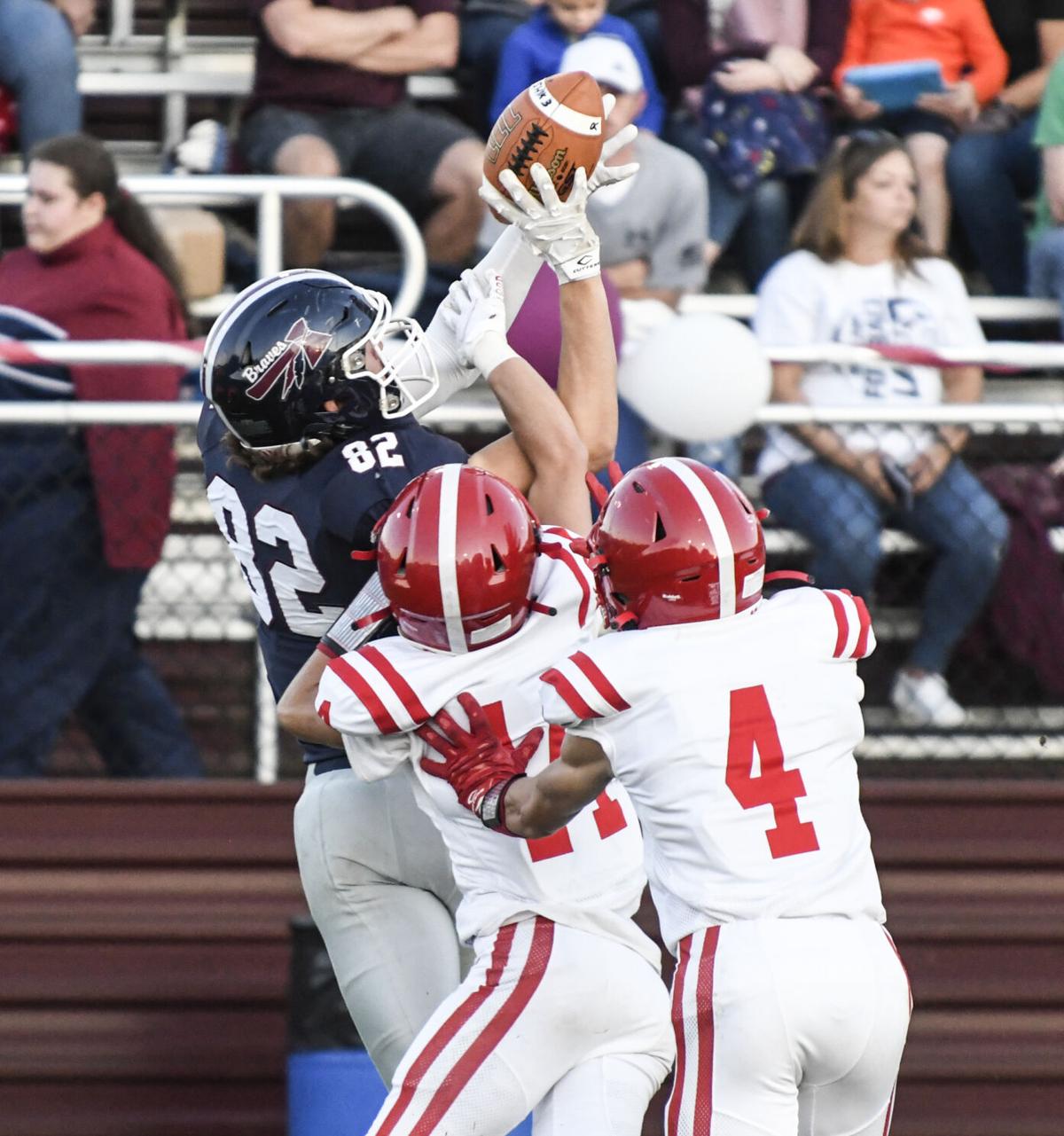 Robert Inglis/The Daily Item Shikellamy's Kaden Hoffman reaches up to try and make a catch as Mount Carmel's Garrett Varano and teammate Michael Farronato reach in to break up the play during Friday's game. 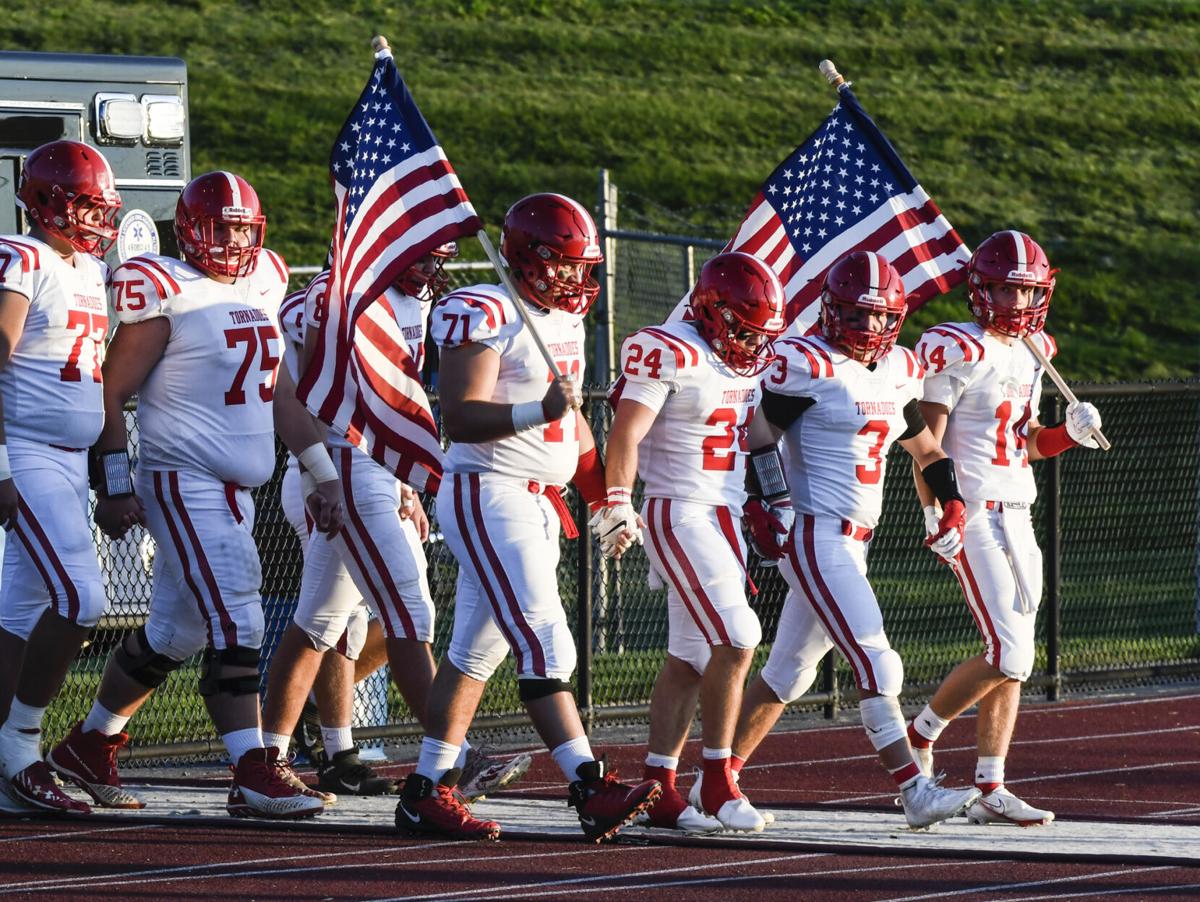 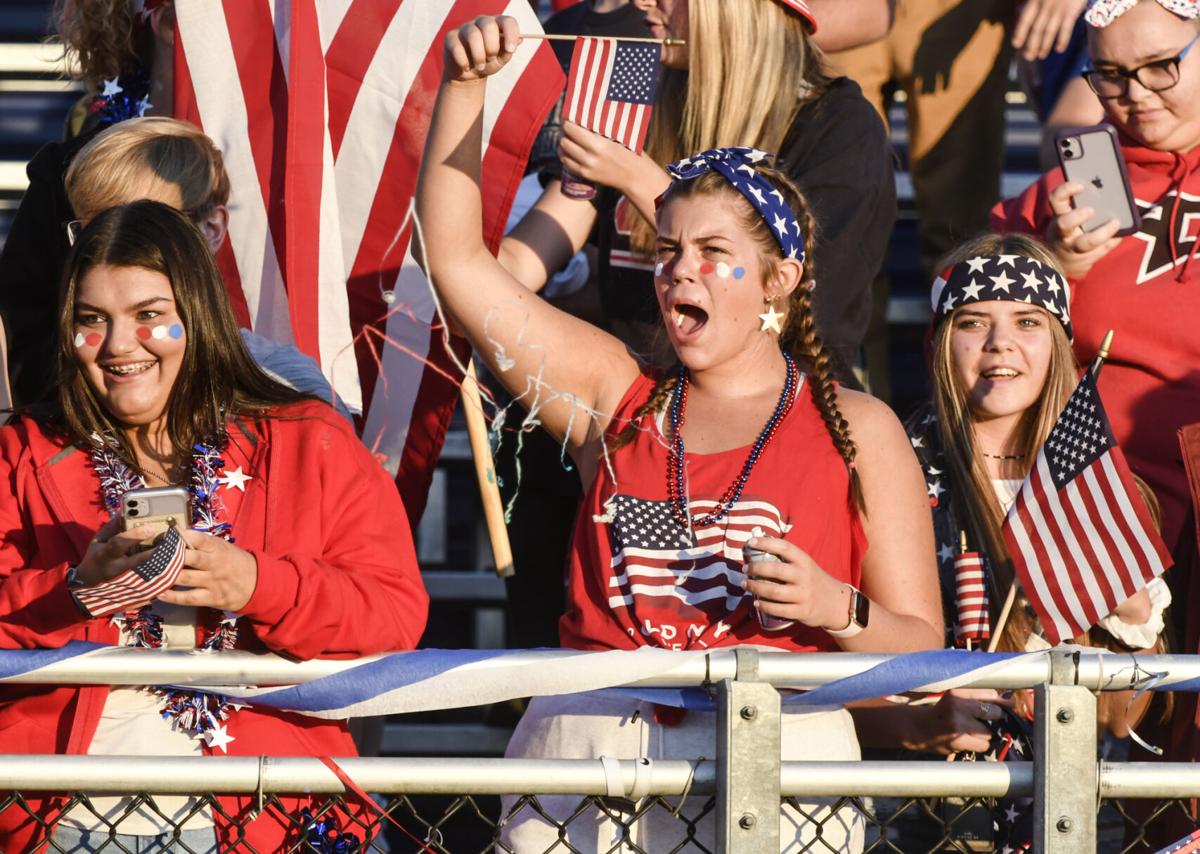 Robert Inglis/The Daily Item Shikellamy's Kaden Hoffman reaches up to try and make a catch as Mount Carmel's Garrett Varano and teammate Michael Farronato reach in to break up the play during Friday's game.

SUNBURY — Despite struggling to move the ball and being held to just 54 total yards at nearly the end of the third quarter, Shikellamy was hanging with Mount Carmel on Friday.

The Braves trailed by two scores, primarily thanks to three forced turnovers.

An 87-yard touchdown pass from Braydon Wertman to John Peiffer pulled Shikellamy into a one-possession game heading to the fourth quarter.

For the second straight week Mount Carmel responded late, and the Red Tornados scored on their next two possessions to put the game away in a 28-6 win over Shikellamy.

"We had a lot of nice drives, but unfortunately turned the ball over at times, so that's something we have to do better with. We need to finish," said Mount Carmel coach John Darrah. "It was good how we responded, and scored a few times to put the game away. It's difficult to win when you turn the ball over that many times, so our guys showed a lot of resiliency to win the game in that situation"

Mount Carmel (2-1) committed two first-half turnovers and one early in the third quarter, two of which were in the red zone and gave Shikellamy the ball inside its own 10 both times.

Aside from the one big play, Shikellamy (0-3) was largely unable to take advantage, as Mount Carmel's size advantage on the line didn't give the Braves much of an opportunity to get their Wing T functioning very well.

"We played a kid at center tonight that had never played center in his life, and I thought he did a heck of a job against a pretty good nose guard there," said Shikellamy coach Jim Keiser. "I'm so proud of our kids. They really played hard. We're sitting there with 27 kids. We're missing 10 with injuries, and we were gassed (by the end)."

That lack of depth proved to be detrimental as Mount Carmel and quarterback Pedro Feliciano responded immediately after Shikellamy's touchdown. After starting their ensuing possession at their own 31, the Red Tornados faced a third-and-1 at the Shikellamy 48, and Feliciano burst up the middle for a 39-yard gain, being caught just inside the Braves' 10. One play later, Julien Stellar punched it in from 9 yards out — his second of three touchdowns on the night — to give the Red Tornadoes a 21-6 lead.

After the Red Tornado defense held Shikellamy to a three-and-out on the Braves' next drive, Mount Carmel put together another six-play drive, highlighted by a 30-yard run by Thomas Davitt, and capped by Stellar's third touchdown of the night, to put the game away.

After a scoreless first quarter, the Red Tornadoes used some outstanding field position to get on the board first with 10:07 left in the second quarter. After Feliciano was picked off at the Shikellamy 8-yard line, Mount Carmel forced the Braves into a three-and-out, and the punt was returned all the way to the Shikellamy 15 by Cole Spears. After a penalty, Michael Farronato took it in for a 10-yard touchdown run.

On Shikellamy's ensuing drive, Wertman was picked off by nose tackle Kelin Geary at midfield. Geary returned it about 5 yards before he was stripped of the ball, only to have Stellar pick it up at the 39-yard line, and run it in for a touchdown to make it 14-0.

The Red Tornadoes were hurt by turnovers of their own on two of their next three possessions, and they turned it over on downs on the other.

Excluding the big play that produced Shikellamy's only score of the game, Mount Carmel allowed just 110 total yards, with 51 of those coming on the Braves' last two drives, which were after Mount Carmel led 28-6.

"I thought our defense played really well. ... That big (play) really woke us up a little bit," said Darrah. "Everyone has heard the term 'grinding it out,' and that's pretty much what we did. Our pass game wasn't the best tonight. We kept the ball on the ground. We found a way to keep chewing up yards and get some first downs. When we didn't turn the ball over, we were able to capitalize and score."