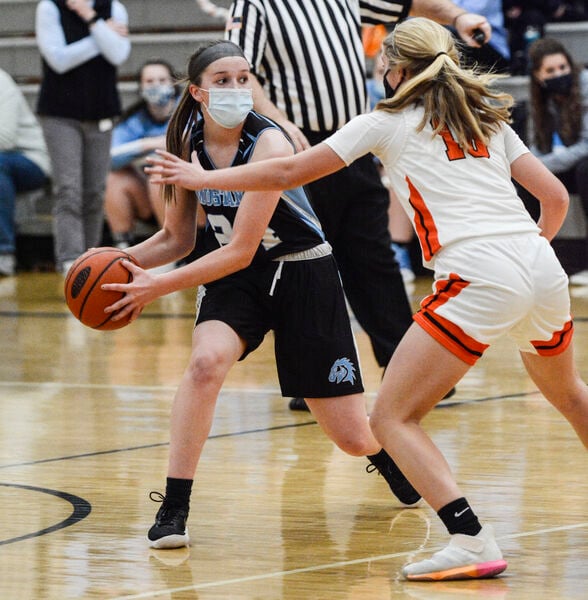 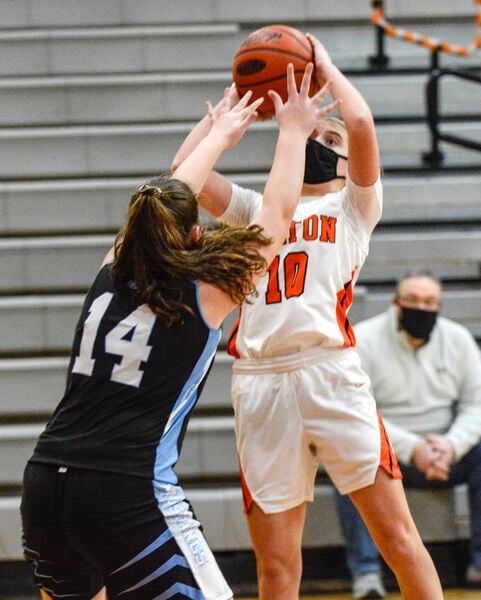 Milton’s Leah Walter gets a shot off over Midd-West’s Chloe Sauer during Tuesday’s game. 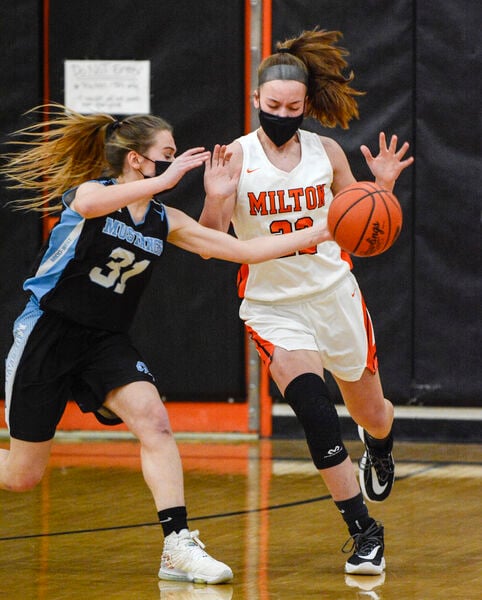 Milton’s Leah Walter gets a shot off over Midd-West’s Chloe Sauer during Tuesday’s game.

MILTON — Bella Fave and her Midd-West teammates played the last four minutes of each half Tuesday in a super-charged cluster of energy.

It helped them build a 13-point halftime lead, and — while it also may have played into a remarkable Milton rally — it ultimately helped hold off the Black Panthers for a 42-40 win in Heartland Athletic Conference girls basketball.

"We acknowledged that they were starting to make some runs, and coming back — the lead was getting smaller and smaller — but we kept our composure and finished up strong," said Fave. "It wasn't quite the difference in score that we wanted at the end, but we rolled with the punches and came out with the win. That's all that really matters at the end of the day."

The Mustangs' advantage was within a bucket or two of 13 points for much of the second half, but a series of eight turnovers fed Milton's 12-1 run over the final three minutes. It was 41-40 with 18 seconds to play when Fave hit the only one of nine Mustangs' fourth-quarter free throws. She then rebounded each of the Black Panthers' last two shots.

"I think what worked for us was we stepped up our defense, and we were able to create some miscues on their part which gave us some easy looks," said Milton coach Phil Davis. "I thought we got easier looks, especially in the fourth quarter, off some transition defense ... and when you make a shot or two your confidence starts to rise.

"Hopefully we can grow from that and move forward."

Although Midd-West (6-7) and Milton (4-8) are in opposite HAC divisions, they are vying for seeds in the upcoming District 4 Class 4A tournament. The Mustangs are currently fifth in the standings — and closer to No. 4 Central Columbia than No. 6 Danville in power ranking. The Black Panthers, who honored seniors Crystal Hamilton and Larissa Shearer, currently hold the eighth and final seed, just ahead of Montoursville (2-9).

Midd-West won four of its last seven, turning away a Danville comeback two weeks ago and holding off Mifflinburg on Saturday before doing the same Tuesday.

"We were moving the ball (late Tuesday, but) we didn't have many shots that fell. Too many turnovers in the fourth quarter, as well," said Mustangs second-year coach Erica Wagner. "We just kept our composure and held on for the win."

Neither team started well, tying at 4 with 2:23 to play in the first quarter before Fave assisted Makenna Dietz and then scored off a Rylee Shawver pass. The 8-4 score underscored seven Midd-West turnovers and Milton's 2-of-13 shooting.

It was 14-12 midway through the second period when the Mustangs' pressure helped create eight turnovers and spark a 13-2 closing run. Shawver had two steals in the second, while Fave and Alexis Walter each had one.

Fave ignited Midd-West's run with a sharp cut to the basket, but she and Walter also made a couple of snap jumpers as they surged ahead 27-14. Walter had seven of her nine points in the spree, including a 3-pointer, while Fave added the other six on 3-for-4 shooting.

"I thought (Fave) really closed out the half strong for them; she got on a roll and got things flowing. Everything she threw up went in," Davis said. "There were a couple times when I was like, Wow — I don't know how we could have played that any better and it went in, and our end how we could have got a better look and it didn't go in.

"I thought, overall, maybe there might have been three or four shots that I wasn't happy with it, that we took when I thought we could have maybe got a better look. In general, I thought we got some great opportunities. If we made five of them ..."

Milton's shooting woes continued through a 3-for-19 third quarter that had them 9-of-43 overall to that point and down 35-24. After sophomore Morgan Reiner hit a jumper from the top of the key with 3:12 to play, the Black Panthers very quickly turned it into a one-point game.

Kiersten Stork scored consecutive baskets with passes from Hamilton and Reiner to cut the deficit to single digits. Milton freshman Abbey Kitchen cut the margin to five with a drive, and three with a pair of free throws. Reiner then gathered a loose ball and popped a baseline jumper with 41.5 seconds to play to make it 41-40.

"When we make mistakes we like to put it past us," said Fave, who scored a game-high 13 points. "The best thing we can do is try to get the ball back and get something going. That's the past, and you've got to move forward. We did that as a team. We turned (the mistakes) into good. It's motivation to get the ball back."

Reiner finished with a team-high 10 points for Milton, while Kitchen and Stork each added eight. Midd-West's Makenna Dietz pulled a game-high 13 rebounds to go with eight points.

Did not score: Larissa Shearer.