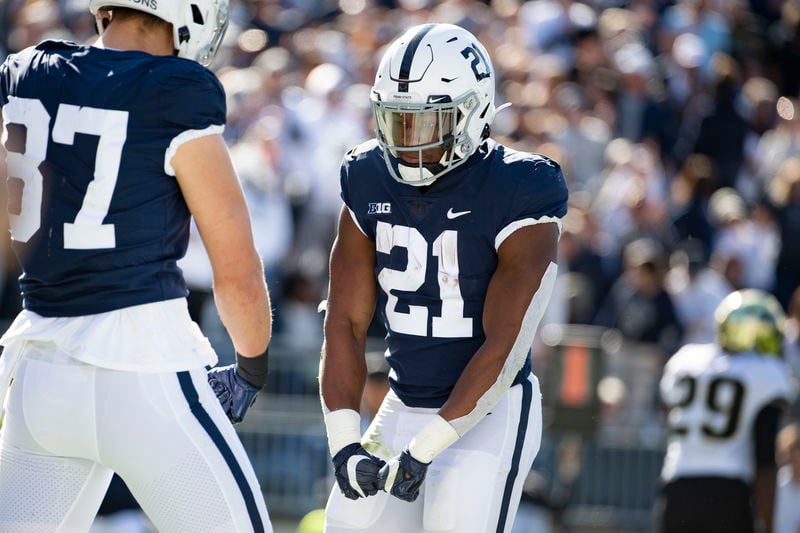 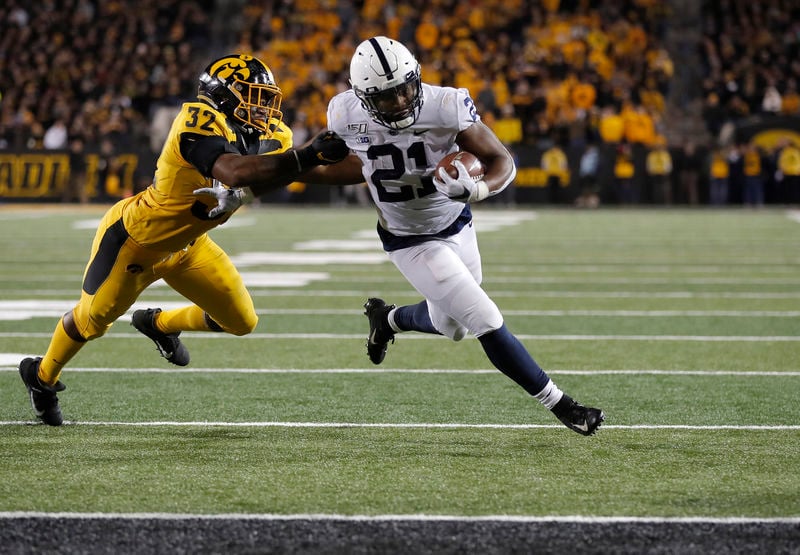 Penn State running back Noah Cain breaks the tackle attempt of Iowa linebacker Djimon Colbert, and runs in for a touchdown during the second half of a game last season in Iowa City, Iowa.

Penn State running back Noah Cain breaks the tackle attempt of Iowa linebacker Djimon Colbert, and runs in for a touchdown during the second half of a game last season in Iowa City, Iowa.

STATE COLLEGE — The momentum had been building, but Penn State running back Noah Cain officially introduced himself to the college football world on a mid-October evening in Iowa City, Iowa.

The freshman rushed for 102 yards on a career-high 22 carries (15 in the fourth quarter), and scored a late-game touchdown to help the Nittany Lions to a 17-12 win.

Two weeks later at Michigan State, Cain jogged onto the field with Penn State’s first-team offense. After accumulating 21 yards on six carries, he suffered a first-half ankle injury that sidelined him for two weeks.

“I hadn’t missed games, really, since my freshman year in high school, so it was really hard for me just to sit back on the sideline and wait my time to get back healthy,” Cain said this week. “I tried to get back and the ankle still wasn’t right. The training staff did the best job that they could trying to make sure I was good mentally and physically, but with ankle injuries sometimes it takes time to heal.”

He returned two weeks later at Ohio State and gained 1 yard on his only carry. After sitting out against Rutgers in the regular-season finale, Cain concluded his inaugural college season with 15 carries for 92 yards and two touchdowns in the Cotton Bowl.

“Even in the bowl game, in my mind I was 100 (percent) but my body wasn’t,” Cain said. “I was so eager to play. I missed four or five games, so I had to play in the bowl game just because my mom lives in Dallas, and I had a lot of family travel to that bowl game.”

Cain admitted he didn’t feel “100%” until four months ago during Penn State’s offseason workouts. Still, he had a Penn State record eight rushing touchdowns by a freshman along with his 443 yards on 84 carries (5.3 yards per carry). He ran for a career-high 105 yards and one touchdown against Purdue on Oct. 5.

The Penn State running back room, led by Journey Brown, along with rising sophomores Devyn Ford and Cain, is considered to be among the best in the Big Ten, as well as the nation.

The trio combined for 1,647 yards rushing and 20 touchdowns last season, and the Nittany Lions ranked fourth in the conference in rushing offense.

“That’s a great room,” Penn State strength and conditioning coach Dwight Galt said earlier this spring. “We’re really, really pleased with that room. Not only are they all hard workers, they’re all very gifted, and they all kind of take that same approach. And that’s a little bit of a gift from Saquon (Barkley, the team’s recent All-American running back).”

Cain and his Penn State teammates’ spring was turned upside down when campuses across the country cleared out in response to the coronavirus pandemic. Further complicating matters, Penn State’s offense was set to learn a new system from first-year offensive coordinator Kirk Ciarrocca. Although the offense remained engaged in learning through virtual means this spring, Cain said it wasn’t a full substitute for on-field instruction.

“I think not having spring ball was a big deal, especially with having to learn a new offense,” Cain said. “If we were in the same offense as last year, putting a few new adjustments in would have been different, but it’s hard for mental reps to translate onto the field. So it’s going to be an adjustment for everybody to come in and just take it one day at a time and learn.”

As the nation adjusted to the new normal presented by the coronavirus, Cain dealt with a new reality for he and his family. His mother, along with three other family members, tested positive for COVID-19. The Baton Rouge, Louisiana, native spent his spring between Dallas and Arizona.

“She had it for like a month, and she would go back and forth to the doctor,” Cain said. “She kept testing positive over and over again. ... Everything they say about the virus — you lose your smell, you lose your taste — it’s a real thing. ... I’ve seen what it can do.

“Some days you don’t know if you’ll make it, honestly, just because of the fact that it’s hurting you. It’s killing you. My cousin had blood clots in his body from it.”

Cain returned to State College last week, and he’ll soon begin voluntary workouts with his teammates. Now that he finally feels 100% healthy, he’s ready to see what his second year holds for him and Penn State’s backfield.

“I feel like the game has slowed down for me, which it has, just with understanding coverages and understanding blitz concepts with the defense,” Cain said. “I think last year, a lot of times, my eyes were all over the place when I go back and watch film. Even when I was running, I was just playing ball, honestly.

“My main goal is (to) just make more plays when my number is called. I’m just really eager to keep learning the playbook with this new offense and just try to play my part next year.”