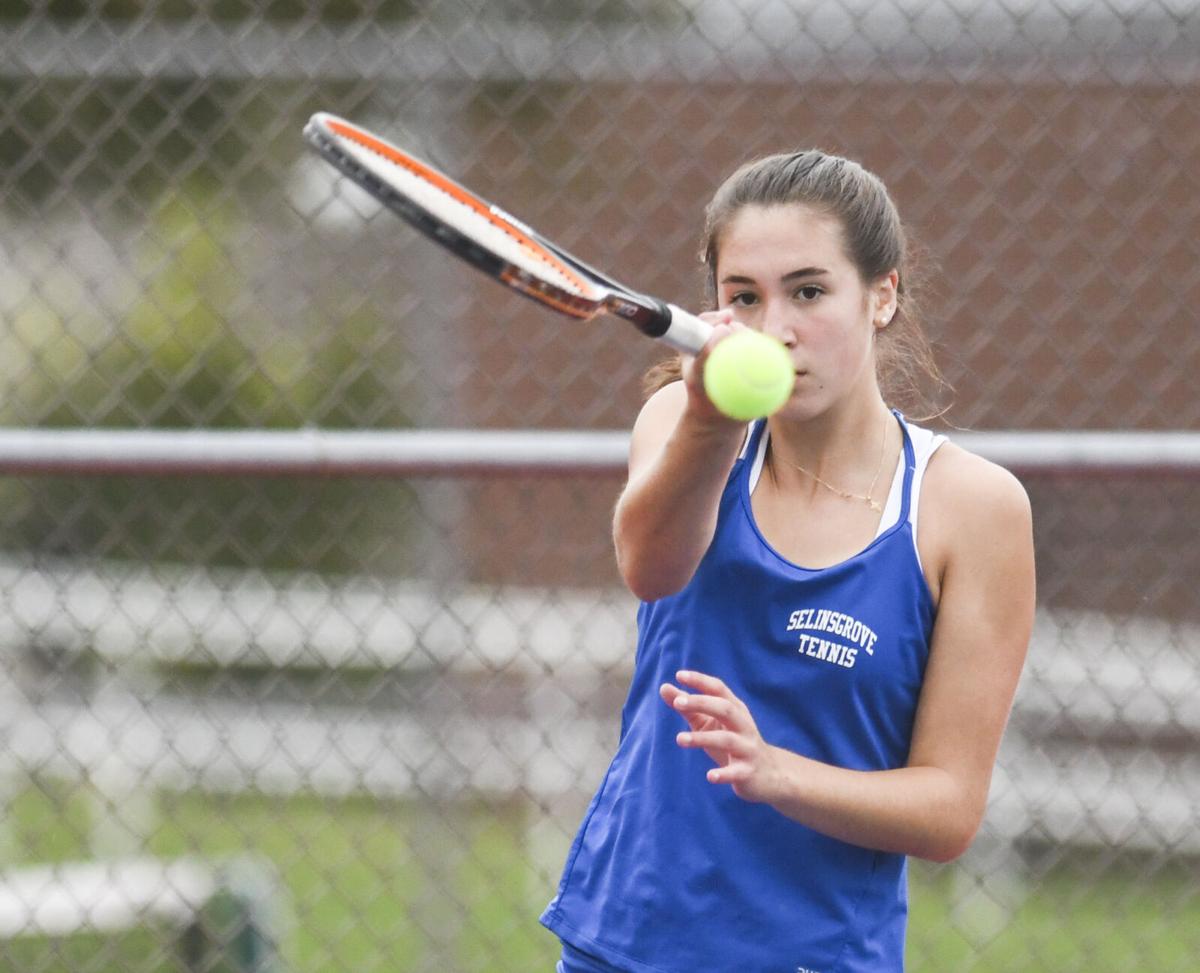 Selinsgrove’s Avery DeFazio follows through on a shot during her second singles match against Jersey Shore on Tuesday. 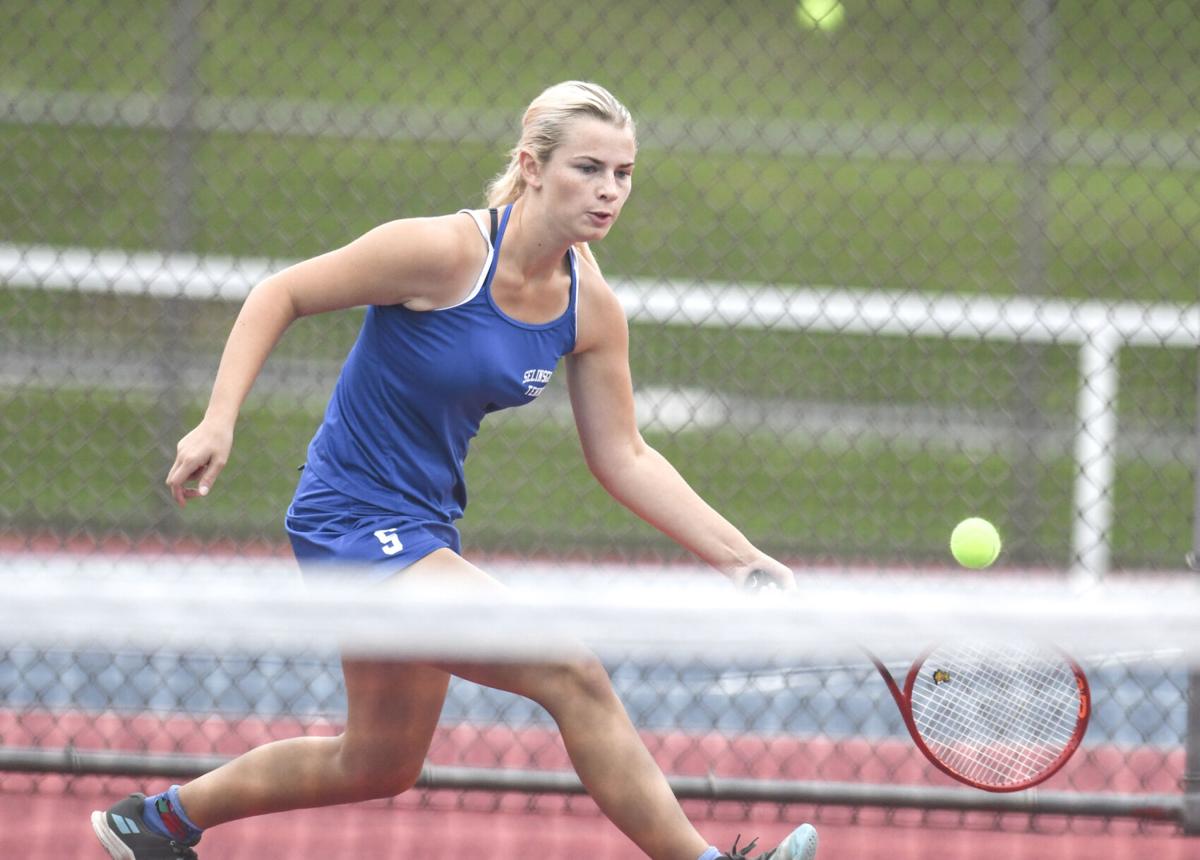 Selinsgrove’s Fiona Finnerty chases down the ball during her first singles match Tuesday against Jersey Shore in the District 4 Class 2A team tournament. The Seals won, 3-2. 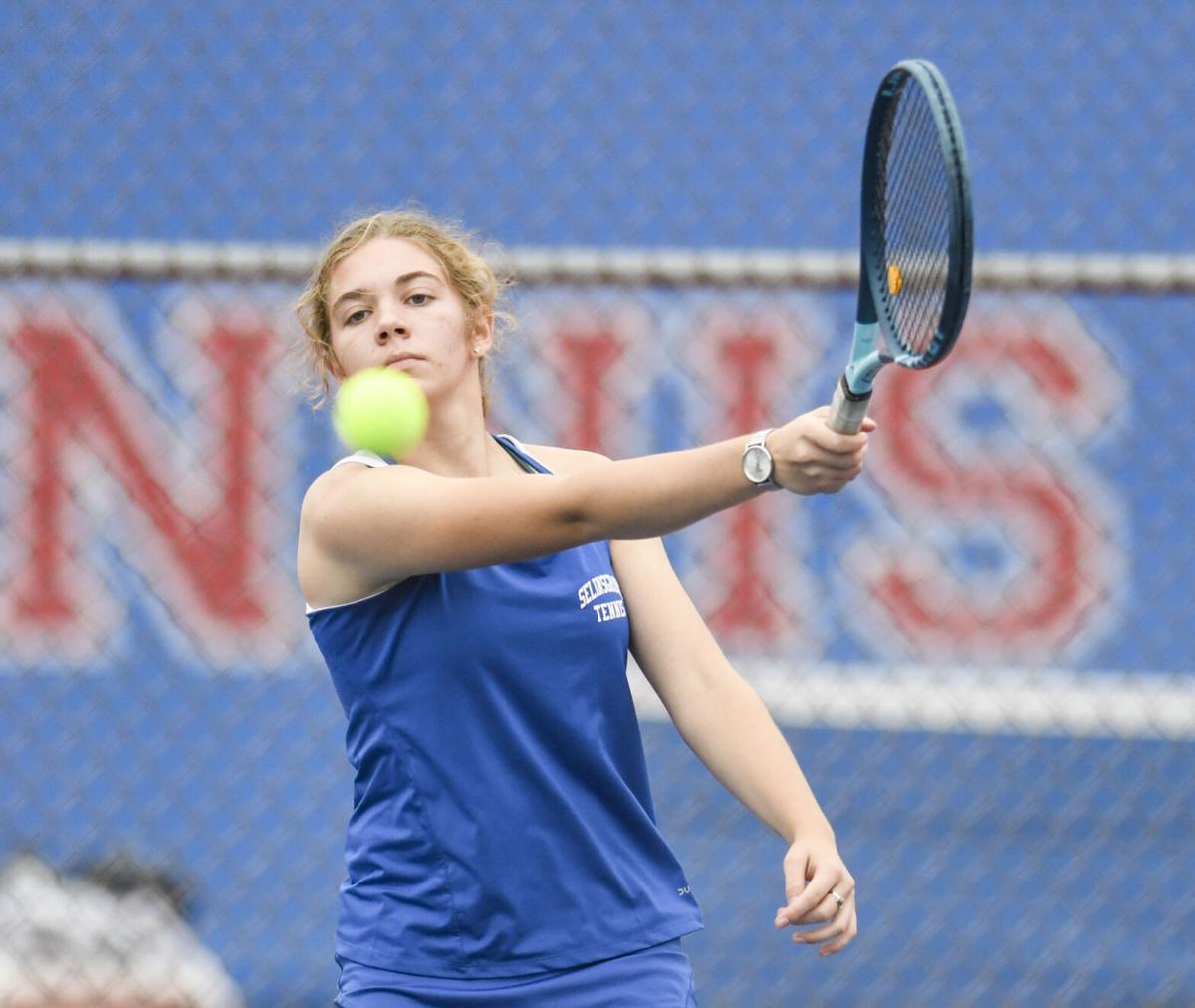 Selinsgrove’s Maddie Rowan hits a forehand during her third singles match on Tuesday against Jersey Shore.

Selinsgrove’s Avery DeFazio follows through on a shot during her second singles match against Jersey Shore on Tuesday.

Selinsgrove’s Fiona Finnerty chases down the ball during her first singles match Tuesday against Jersey Shore in the District 4 Class 2A team tournament. The Seals won, 3-2.

Selinsgrove’s Maddie Rowan hits a forehand during her third singles match on Tuesday against Jersey Shore.

SELINSGROVE — With the District 4 team tennis quarterfinal between Selinsgrove and Jersey Shore tied, all eyes were on the decisive second doubles match.

That was just fine with the Seals' team of Murphy O'Brien and Laney Liesenfeld.

"It's so much more fun, knowing there's stuff on the line and we're playing for a good reason," O'Brien said. "I loved everyone watching."

With the No. 2 doubles match tied midway through the first set, the Seals' duo reeled off 13 straight points to take control on their way to a 6-2, 6-1 win, sealing the team win, 3-2, and putting Selinsgrove into Thursday's district semifinals.

"It feels pretty good. We've been preparing for this the whole season," Selinsgrove senior Avery DeFazio said. "We've been keeping our momentum going forward, and everyone is super-excited about it."

DeFazio won at No. 2 singles, and Selinsgrove's first doubles team of Eden Miller and Norah Witkop also won, while the Bulldogs claimed the matches at first and third singles.

That put all of the pressure on O'Brien and Liesenfield.

"It was a nerve-wracking match, obviously, coming down to the two doubles there," Selinsgrove coach Matt Salsman said.

The doubles teams traded holds of serve and then breaks of serve to start the match. With O'Brien serving at 2-2, 30-all everything seemed to change.

O'Brien hit a passing shot winner and Jersey Shore made an error to give the Seals a 3-2 lead.

"Murph really wears her expressions on her face," Salsman said. "I think the biggest thing was she started to hit some winners, and that helped her relax. In turn, Laney fed off that."

After a pair of Jersey Shore errors to start the next game, Liesenfeld hit a backhand stab volley winner, followed by an O'Brien smash. O'Brien hit two more winners in the next game as Liesenfeld held at love for a 5-2 lead. A pair of Bulldog errors and a Liesenfeld smash gave the Seals three set points, and 13 points in a row. After a Selinsgrove error, Liesenfeld hit a smash winner to give her team the first set.

"We had a little talk and we decided that we can do it," Liesenfeld said of the 13-point stretch. "We knew we should win. We beat them the last two times, so there was no reason this should be any different."

O'Brien added: "It was pure confidence. We knew we were the better team, and we were ready to go."

While the No. 2 doubles match was decisive, the No. 1 doubles match might have been the most important. Jersey Shore and Selinsgrove split a pair of regular-season matches, with the first doubles match being the swing point.

"We split during the season, and the difference in those matches was one doubles," Salsman said. "So I knew they knew the significance of their match today. They had a real good week of preparation leading up to this."

Witkop and Miller battled Jersey Shore through the first set, staying just ahead and on serve until the 10th game. With the Bulldogs serving and trailing 4-5, the Seals took over.

Miller ripped a return winner on the first point. Witkop's steady baseline play forced errors on the next two points, and Miller hit a cut forehand right at the feet of the Bulldogs' net player for a break at love to claim the first set.

"I thought Eden played her best match that she played all season long," Salsman said. "She was hitting winners. She was getting up to the net. Norah is one of the most consistent players on our team. You know what you're going to get from her night-in and night-out."

The Seals' other point came from a 6-0, 6-2 win by DeFazio that was more competitive than the score indicated.

"That's how it's been all three matches," DeFazio said. "She's a very good player. The scores don't dictate what has happened in the matches I've played with her."

DeFazio, who improved to 17-1 on the season, said she had to be vigilant to stay away from her opponent's forehand.

"Because I've played her twice before, I noticed I needed to play good defense," DeFazio said. "She has great forehand topspin strokes to the lines. My goal was to keep it to her backhand, and, honestly, just block the ball back until she made a mistake."

"It was really good that it was tied," DeFazio said. "If we won both (regular-season matches), we might have come in with a different mindset today. The mindset we had today was that we know we can beat them. At the same time, we knew if we didn't play our best or got lackadaisical, we wouldn't."

While the team returns to action Thursday, DeFazio and No. 1 singles player Fiona Finnerty will both play in the singles semifinals today. Finnerty faces Jersey Shore's Peyton Dincher for the fourth time this season, and the second day in a row. DeFazio will take on top-seeded Olivia Dorner of South Williamsport, the defending state champion.

"One hundred percent, no doubt, it's going to be a challenge," DeFazio said. "I'm really excited for the opportunity to play her. I'm just going to go in with the mindset of doing the best that I can."