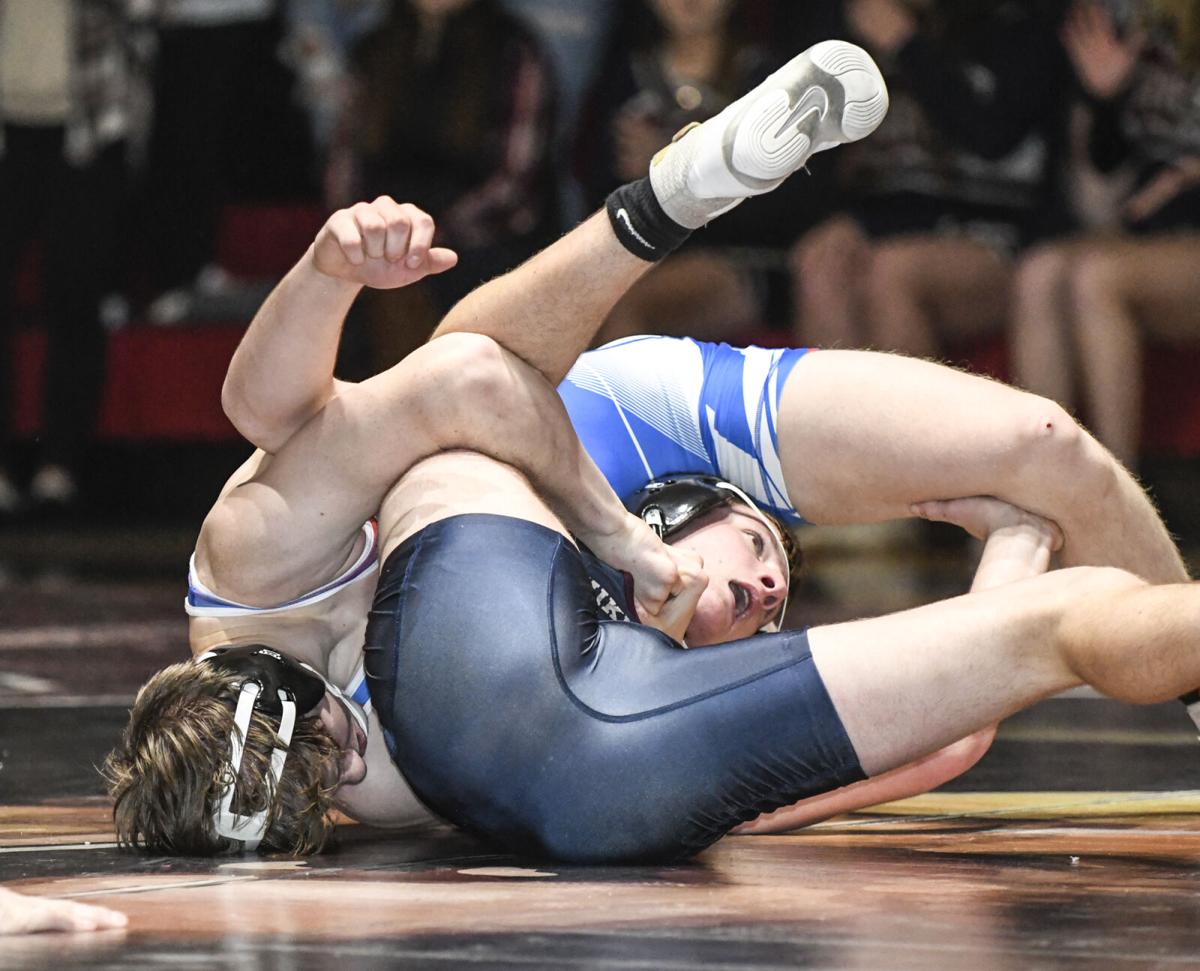 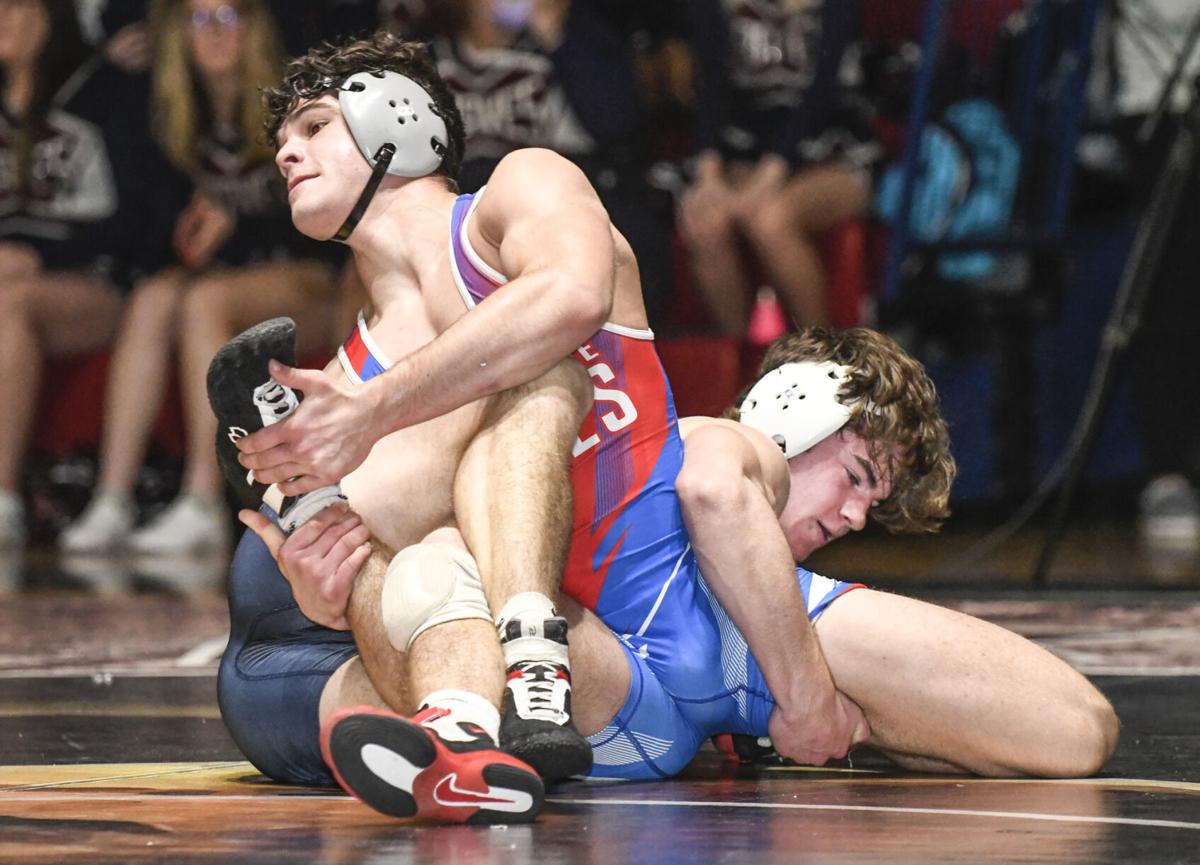 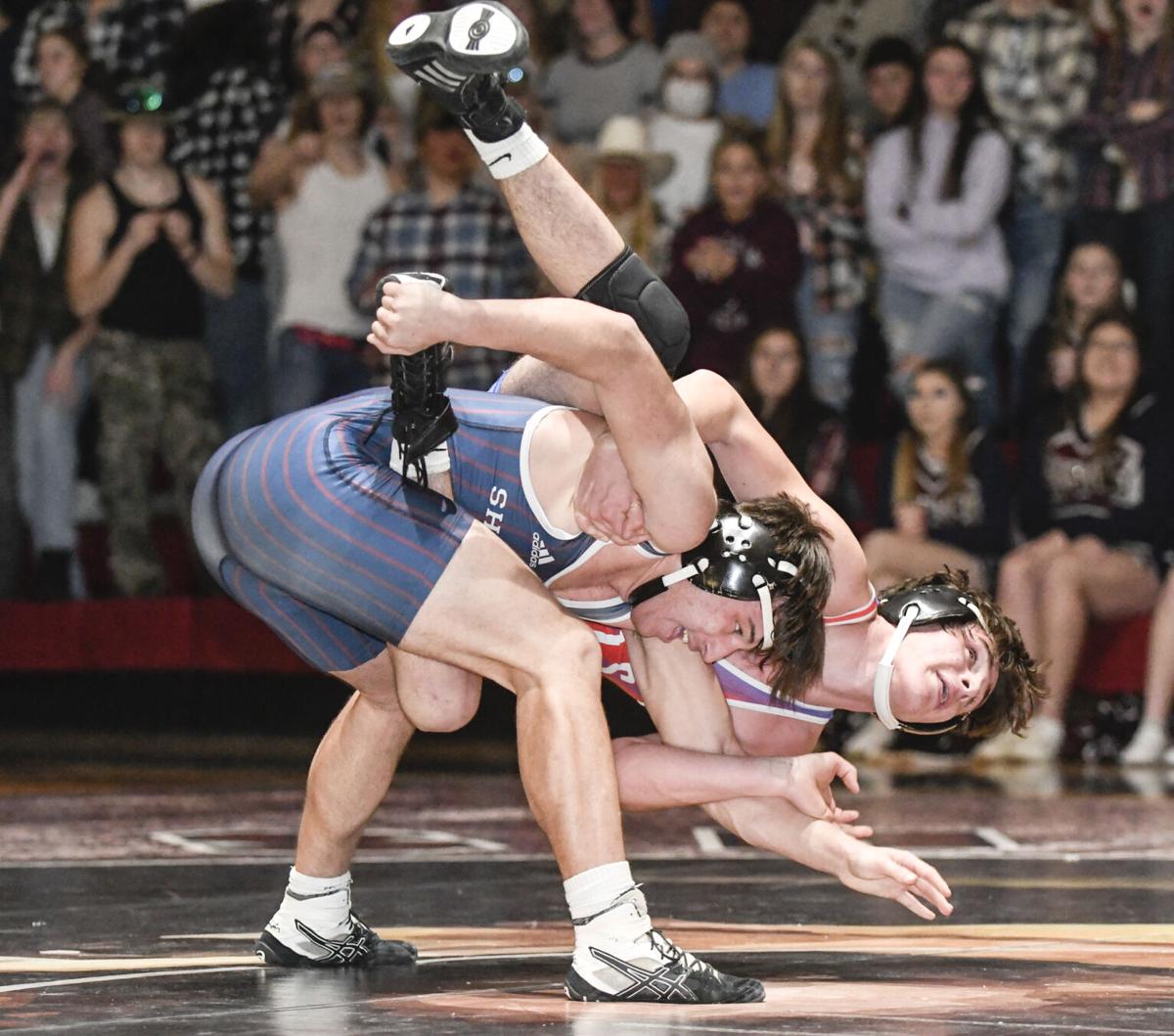 Selinsgrove’s Sylvan Martin tries to hang onto Shikellamy’s Matt Shaffer as they struggle for position during their match at 172 on Thursday. 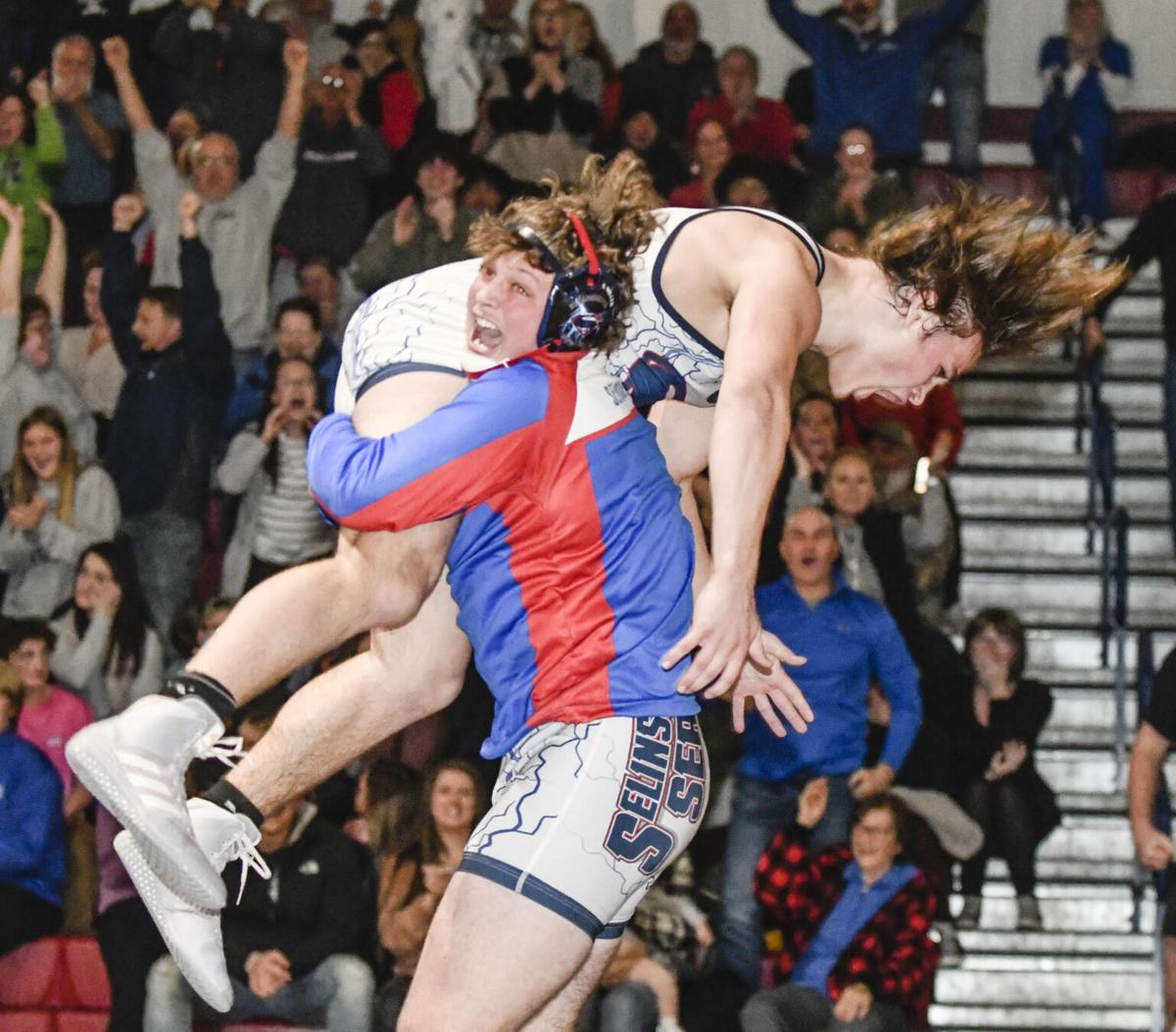 Robert Inglis/The Daily Item Selinsgrove's Steven Miller holds up teammate and brother Ethan Miller after Ethan Miller got a pin over Shikellamy's Gage Wolfe in their match at 189 pounds on Thursday.

Selinsgrove’s Sylvan Martin tries to hang onto Shikellamy’s Matt Shaffer as they struggle for position during their match at 172 on Thursday.

Robert Inglis/The Daily Item Selinsgrove's Steven Miller holds up teammate and brother Ethan Miller after Ethan Miller got a pin over Shikellamy's Gage Wolfe in their match at 189 pounds on Thursday.

SUNBURY — Selinsgrove already had the momentum after three bouts, leading by 11 on Thursday night in the annual cross-river showdown between the Seals and Shikellamy.

The Braves were looking to stop the bleeding when they sent senior Gage Wolfe out to face freshman Ethan Miller at 189 pounds. Wolfe (17-1) is ranked No. 13 in the state in Class 3A. His only loss was to defending state medalist Sammy Sasso (now 17-0) of Nazareth in a season-opening tournament.

Wolfe opened with a first-period takedown and took a lead into the second period.

However, it was Miller (8-4) who had the big finish and sent the Selinsgrove student section into a frenzy with a dramatic third-period pin as the visitors rolled to a 50-17 victory in Phil Lockcuff Gym.

Miller escaped in the second, took Wolfe down and gave up an escape. Leading 4-3, the Seal found another gear. As both were working upper body, Miller hipped into Wolfe and quickly planted him on the mat for a pin in 4 minutes, 40 seconds.

“I knew he was really strong, and I have (good) hips, so I wanted to flow around, and I was trying to go upper body,” Miller said.

“It was the one of the best feelings ever. The whole town was behind me."

Selinsgrove coach Seth Martin said: “Ethan hasn’t really shown us yet what he’s capable of. He’s an absolute wild man. He’s not the most technical guy, but he’s a dangerous guy to wrestle.”

The other early upset was an 11-6 win by Josiah Foss over Coltyn Sempko, who had beaten Foss all three times they previously met.

“He beat me all three times before, and I came into the match with a chip on my shoulder. I knew I wanted this one. I was going to throw everything out there and see what happens,” Foss said.

After Foss’ workout partner, Aiden Gaugler, opened the meet with a technical fall, Foss said he knew he had to keep it going.

“After he teched his kid, I just knew I had to keep building off that,” said Foss, who added that he credits Gaugler for helping him grow as a wrestler.

The Seals built the lead to 35-0 after seven bouts before the Braves (6-4, 2-3) got on the board with the first of their three pins

Martin said such a big lead to start a match is not typical for his team, especially against Shikellamy.

“They come out and want to win, and it doesn’t matter who it is,” Martin said. “I was not surprised but I was certainly happy.’’

Martin said if the teams wrestled nine more times this year, it wouldn’t be that lopsided.

Martin said it is really tough when a team sees its top two seniors go down early.

“I know how that feels. I’ve been there many times, including against Shik,” he said.

Sophomore Alex Reed pinned freshman Nathan Martin in 3:15 to break the shutout, and Shikellamy also got back-to-back falls from sophomore Isaac McGregor (in 38 seconds at 132) and sophomore C.J. Keener (in 4:45 at 138).

Shikellamy coach Tim Boetsch said his team has taken the early momentum in most matches this year, and he talked to them in the locker room afterward “about understanding the importance of momentum.

“We talked about having to turn the tide when the momentum shifts against us. It turned against us tonight, and we never got it back,” Boetsch said.

Note: One team point was deducted at 138 for unsportsmanlike conduct.