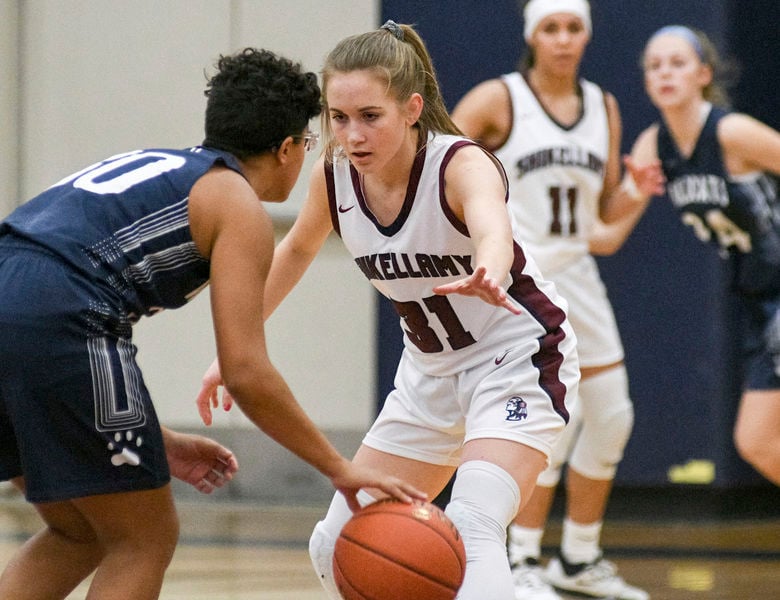 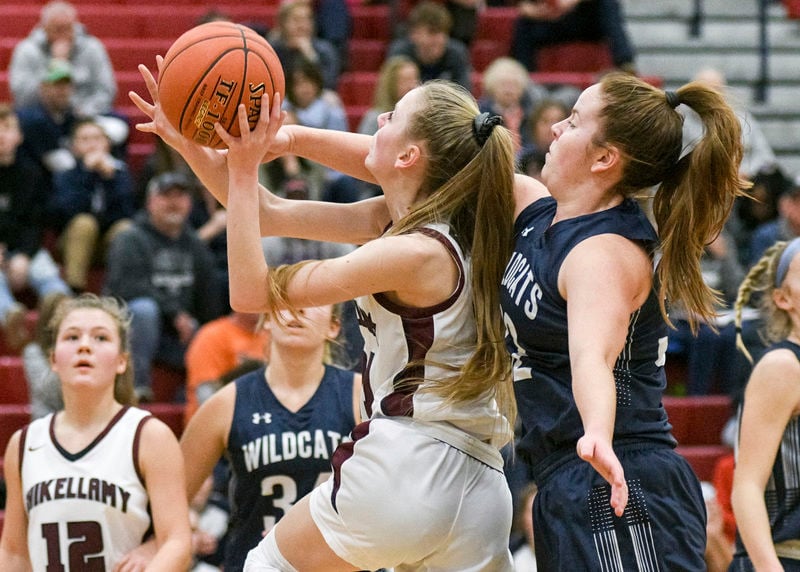 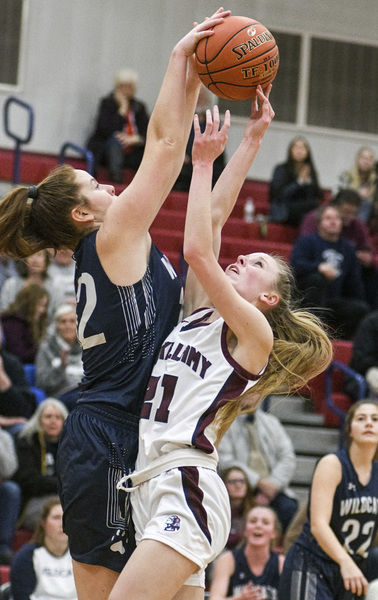 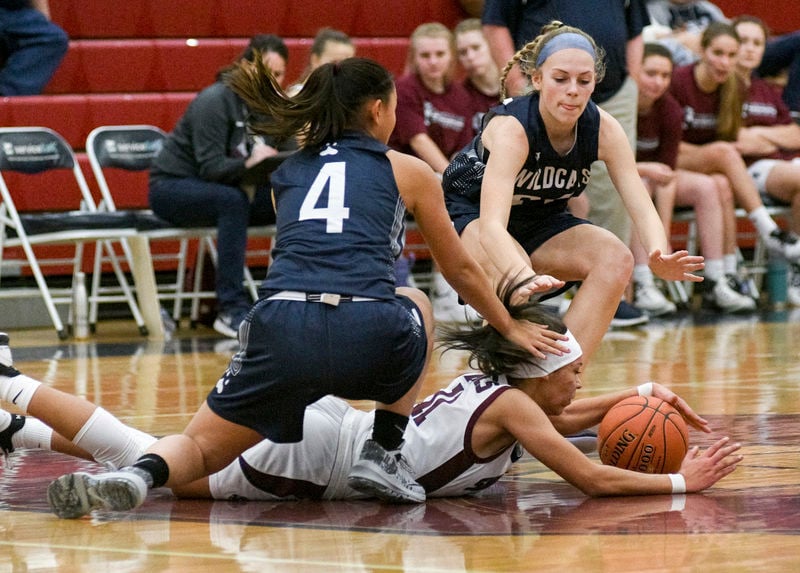 Shikellamy's Jordan Moten dives on the ground for a loose ball between Mifflinburg's Olivia Erickson and Ella Shuck on Friday night. 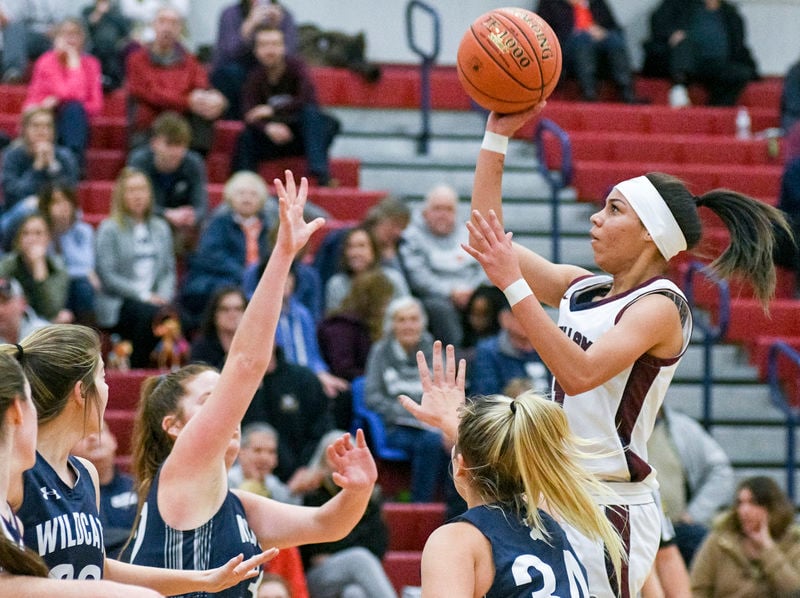 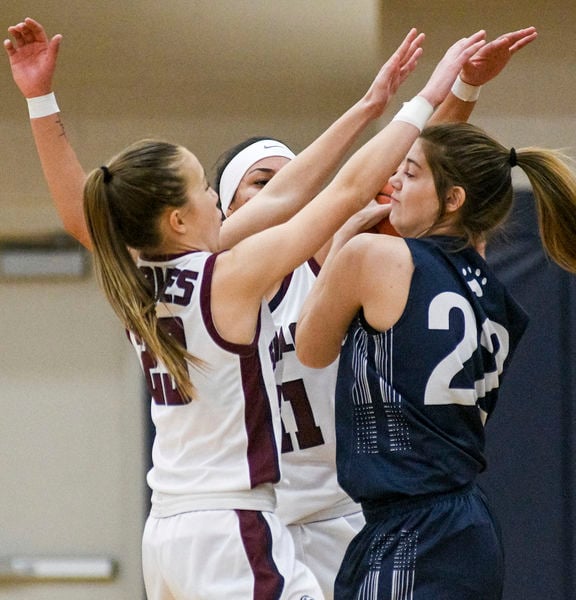 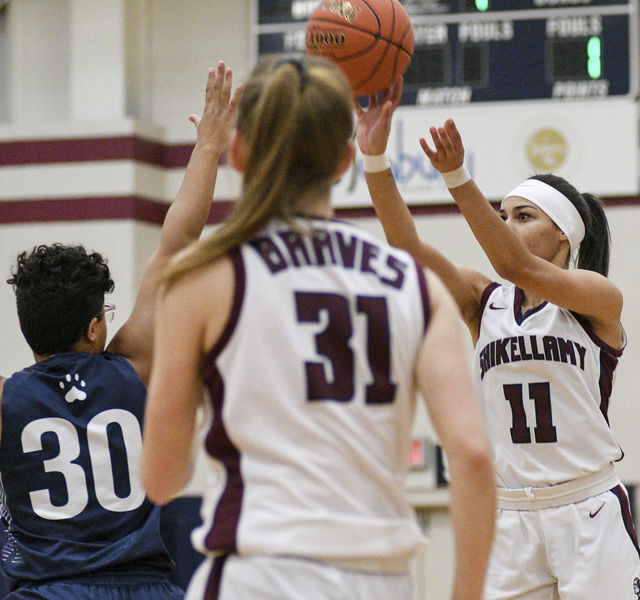 Shikellamy's Jordan Moten dives on the ground for a loose ball between Mifflinburg's Olivia Erickson and Ella Shuck on Friday night.

So a great play was made borderline spectacular when the 5-foot-6 sophomore out-jumped a virtual forest of taller girls for a putback that halted a furious Mifflinburg comeback.

The visiting Wildcats slashed a 17-point third-quarter deficit to seven with 1:35 to play when Bronowicz tapped a teammate’s miss up and in. Mifflinburg didn’t score again, and the Braves tacked on for a 45-32 win in Heartland Athletic Conference-Division I play.

“It’s definitely a mental and passion thing, for sure,” said Bronowicz, who filled her stat line with hustle plays (seven rebounds, five steals) in addition to scoring a career-high 11 points.

Shikellamy (13-5) won for the fourth time in five games to maintain hope of earning a piece of the HAC-I title at 9-2. At 10-0, Danville clinched a share of the crown Friday with two division games to play. The Braves must beat archrival Selinsgrove while the Ironmen lose both its remaining HAC-I games to split the division championship.

Absent that, the Braves have their most wins since 15 in 2013-14 and a second consecutive berth (and potential No. 2 seed) in the District 4-11 Class 5A subregional.

“They’re learning how to win,” said Shikellamy coach Lew Dellegrotti. “We were tired and they put on a run — you know a run’s going to happen — and got within seven, but we got it together and took control. I’m very proud of them.”

Mifflinburg (9-10, 6-4), in line for the No. 4 seed in District 4 Class 4A play, forced nine of the Braves’ 22 turnovers in the fourth quarter to stage a rally. Angela Reamer had four of her nine steals in the period and scored six points in an 8-2 run that pulled the Wildcats within 39-32. It was a startling turn of events, given Shikellamy held a 36-19 lead with 1:10 to play in the third.

“That desire was there in the second half, no doubt,” said first-year Mifflinburg coach Kris Shuck.

The Wildcats’ deep hole was partially a product of a game plan gone awry. They wanted to exploit a size advantage deep in the paint, but threw away too many entry passes — or failed to convert ones that connected — to establish any dominance. Shikellamy, meanwhile, got first-quarter scoring from four players to go ahead 12-8 and build confidence in the absence of their point guard.

“We did want to look inside because we did have that kind of (height) advantage,” said Shuck. “We did force some (passes) ... and we didn’t finish early on, then I think we pressed. By the same token, we kind of came down and it was one-pass-and-in. It didn’t follow what we wanted to do, running an offense and eventually build into that.”

Shikellamy, though, was ready to defend the post after battling Mount Carmel’s 6-2 Dani Rae Renno and 6-1 Alyssa Reisinger in a 52-47 loss their last time out.

“(The Red Tornadoes) have some really tall girls. We’re a very short team, obviously — I think we’re the shortest in the league,” said Bronowicz. “That really prepared us for tonight, to know that we can compete against really good teams. We’ve got to show it against all teams now. We gotta keep up the intensity the whole, entire game.”

All five Braves starters scored in the second quarter — junior Brooke Snyder blew past her 6.4 scoring average with 11 first-half points — and their margin grew to 28-15 at halftime. With more balance in the third period, including consecutive driving scores by Bronowicz, Shikellamy’s lead hit the high of 17.

“That’s what we preach. When we run that spread offense and back-door cuts ... everybody’s got to want the ball,” said Dellegrotti. “And Brooke Snyder has been coming on like a gangbuster.”

Snyder scored a game-high 13 points — for 11.2 ppg. in her last five — despite requiring the trainer’s attention on her left knee and right thigh following separate collisions. Jordan Moten added 10 points in the win.

Did not score: Paige Fausey.