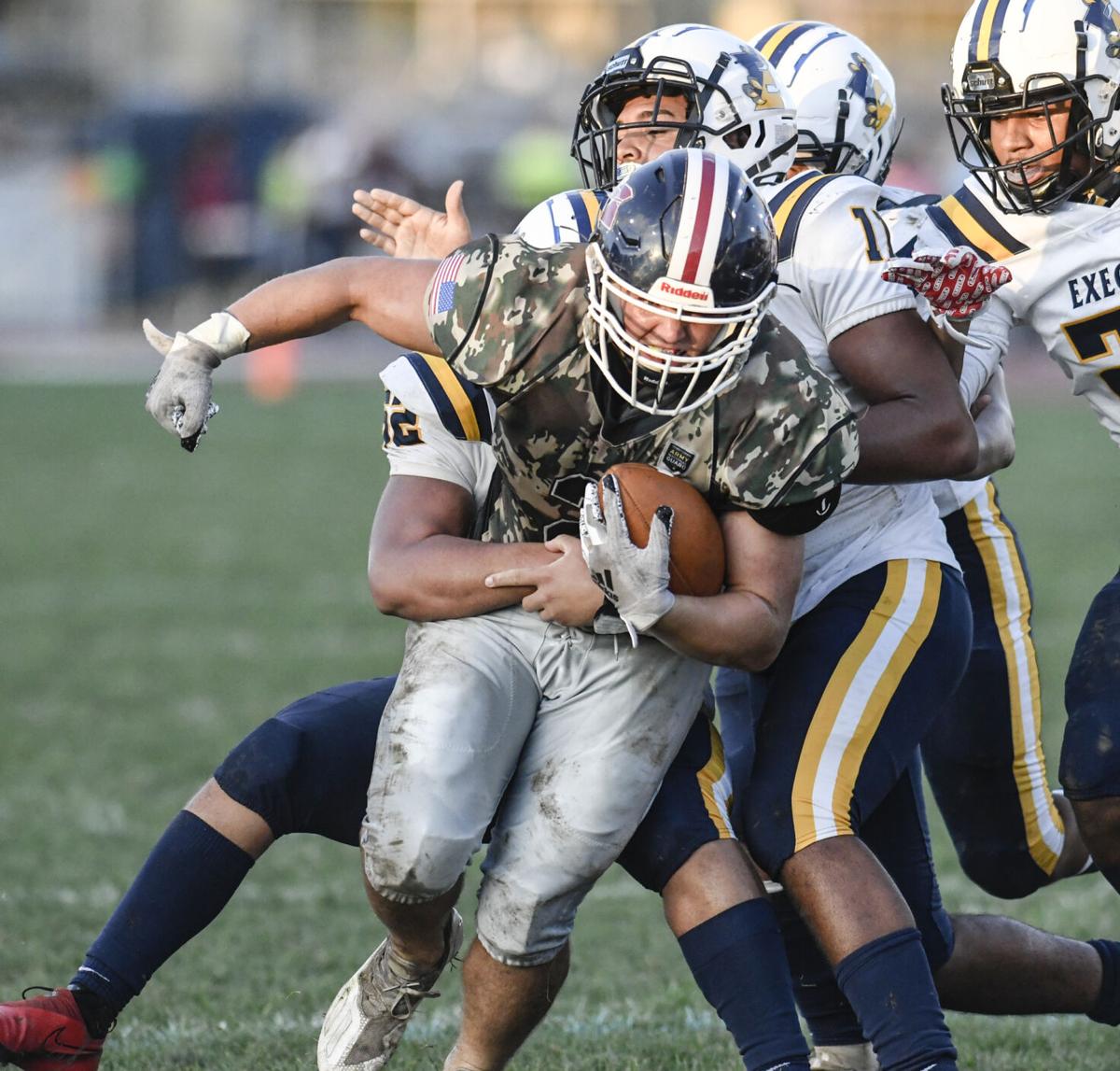 Shikellamy’s Isaac Schaffer-Nietz tries to power his way through a tackle with defenders in tow on Friday against Executive Education Academy. 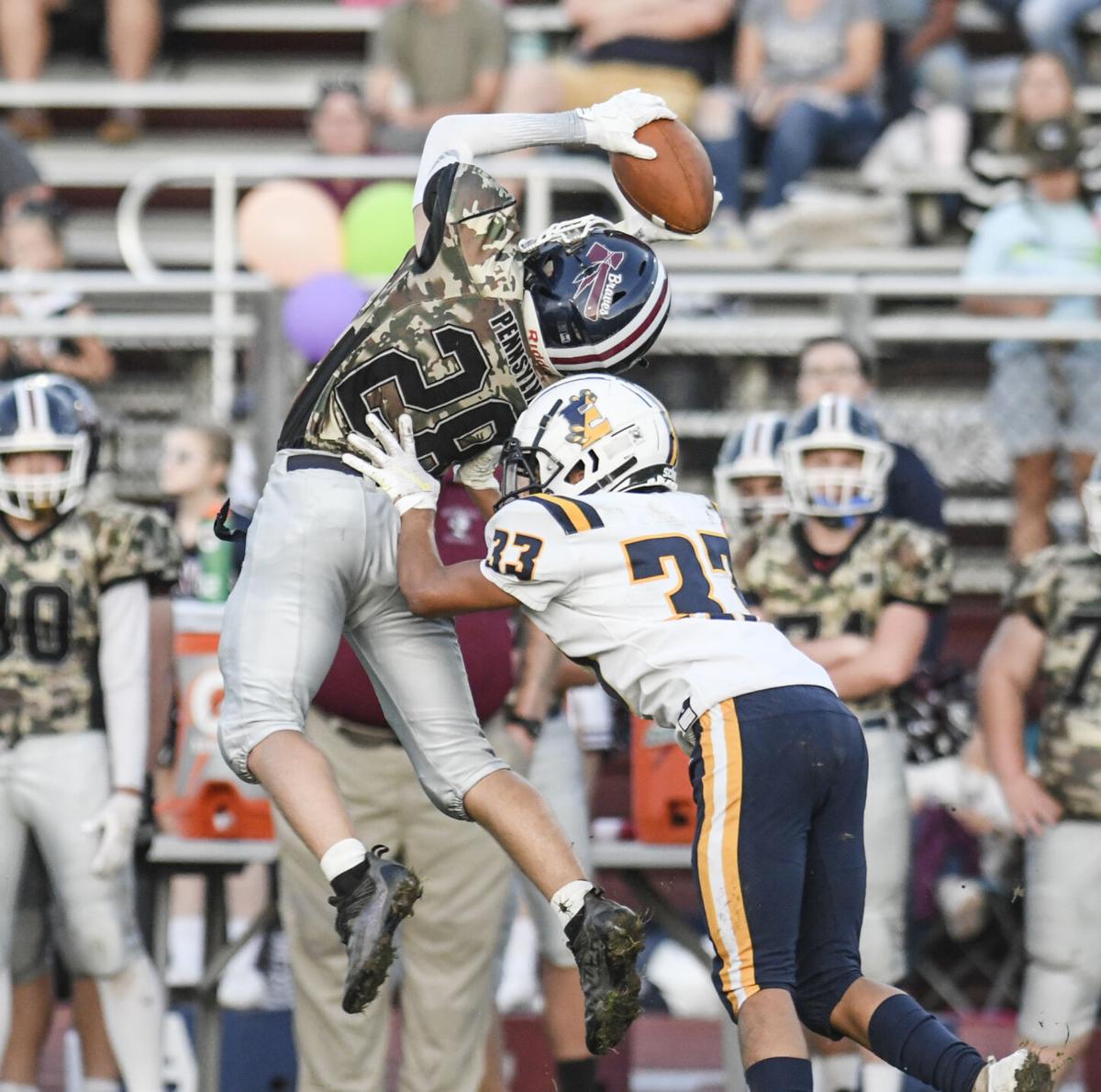 Shikellamy’s Chase Morgan leaps to make a catch during the Braves’ win over Executive Education Academy earlier this season. 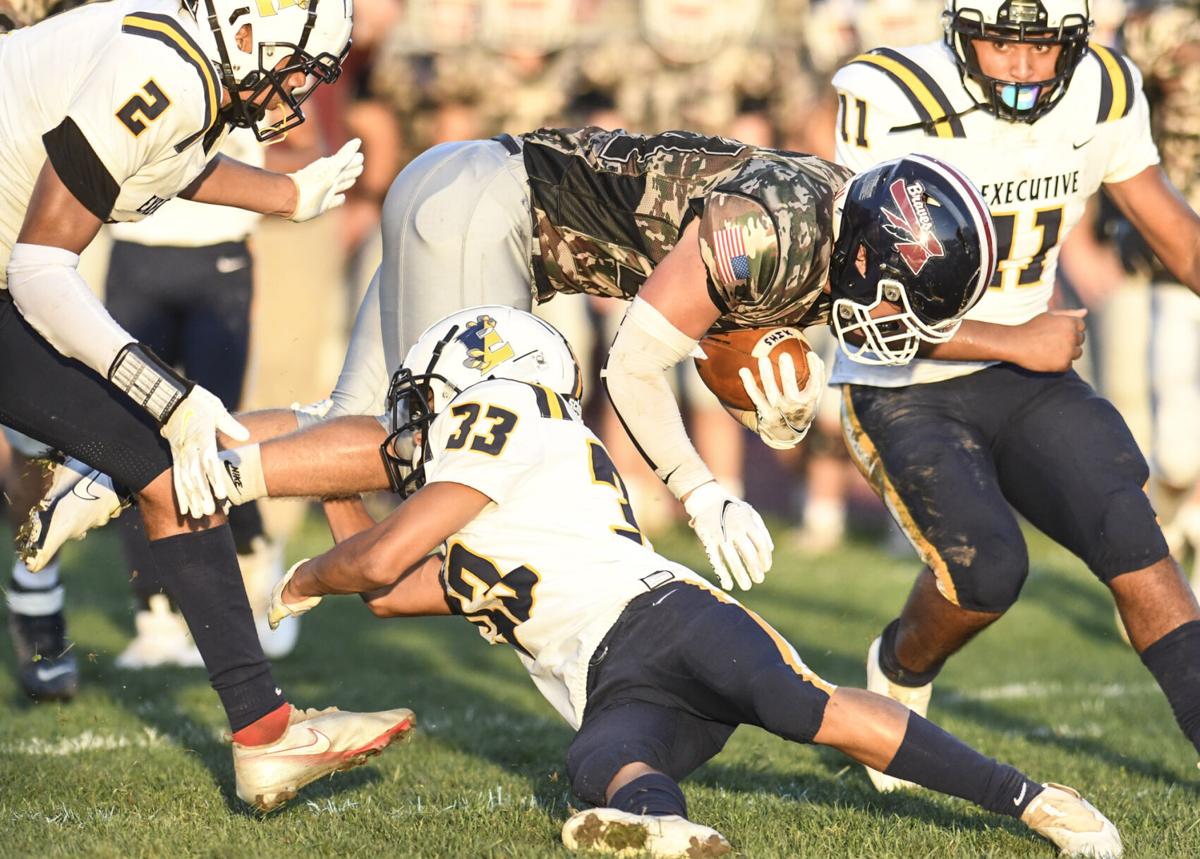 Shikellamy’s Gage Wolfe leaps over the arm of Executive Education Academy’s Dorian Thomas on a carry during Friday’s game.

Shikellamy’s Isaac Schaffer-Nietz tries to power his way through a tackle with defenders in tow on Friday against Executive Education Academy.

Shikellamy’s Chase Morgan leaps to make a catch during the Braves’ win over Executive Education Academy earlier this season.

Shikellamy’s Gage Wolfe leaps over the arm of Executive Education Academy’s Dorian Thomas on a carry during Friday’s game.

SUNBURY — If you had asked Shikellamy coach Jim Keiser last Friday about his team’s upcoming football game, he probably would have told you the team needed to bring its A-game against a tough Wellsboro team, but midway through the week plans changed.

COVID shut down Wellsboro’s opportunity to take on the Braves and the team was scrambling to find a new opponent on a short week.

In steps the Executive Education Academy out of Allentown. If you had never heard of them prior to this week, you probably aren’t alone. The school itself has only been around for eight years and 2021 is the school’s first year with a football program. With nothing on the schedule, coach Larry Ford and the Raptors hopped on a bus with one thought on their mind: To play football.

“We took this game because we needed to play football.” said Ford, a former Division-I football player himself at the University of West Virginia. “We want to keep playing. We want to get better each and every week. There is a lot of stuff we’ve got to work on.”

And play football is exactly what the inexperienced team did. The Raptors hung in with Shikellamy all night. In the end, it was the home Braves that picked up a 28-14 victory.

“It feels good to get the first win of the season, I’m happy for the kids.” said Keiser. “They worked so hard all summer long. It's nice to get a little success for all the work they’ve put in.”

The win was Shikellamy’s first of the young season, and the home team had control the whole way.

Executive Education Academy (EEA) won the opening coin toss and deferred to the second half, giving Shikellamy the ball first with a chance to take the early lead. The Braves did just that, marching down the field on a six-play, 63-yard drive that culminated in a four-yard touchdown run by Isaac Schaffer-Neitz.

Shik extended the lead on its second offensive possession of the game. Shikellamy forced the Raptors to punt and may have gotten a piece of the ball as it did not sail far, going out of bounds at the Raptors’ 38-yard line.

Once again the Braves put on a nice drive, mainly by running the football. Shikellamy turned in a nine-play drive that ended with an 11-yard touchdown run by Coltyn Sempko, putting the Braves up 14-0 not even 10 minutes into the game.

Just as things were looking a bit bleak for the visitors, a squib kick on the ensuing kickoff took just the right bounce for junior kick returner Jyhmeik Roman. Roman took a nice hop in stride and blazed past the Shikellamy coverage team to take the kickoff back for a 75-yard return. Without a true kicker on the team, EEA lined up for a two-point conversion but could not find the end zone, putting the Raptors down 14-6, but still within striking distance.

The Braves following two drives took time off the clock, but both ended in interceptions in the endzone. Fortunately for the home team, EEA did not turn either of these turnovers into a score.

“We need to clean up the mistakes. We can’t lollipop the football and have it get picked.” said Keiser. “We have to make throws when we have the opportunity, and we can’t make as many penalties. If we don’t clean that up, Jersey Shore is going to smack us bad next week.”

With a 14-6 halftime lead, the Braves kicked to the Raptors to open the second half. EEA put a nice drive together, led by a few nice runs by Roman and a 10-yard catch and run from quarterback Darmel Lopez to wide receiver Emery Plummer. Deep in Shikellamy territory with a chance to potentially tie the game, Lopez launched a ball toward the end zone that found the hands of Shikellamy cornerback John Peifer. Peifer returned the ball out of the end zone to the Shikellamy six-yard line where the home team took over with its one-score lead still intact.

From there the Braves went to work. Grinding away with some nice runs by the trio of Schaffer-Neitz, Sempko and Gage Wolfe. All three Shikellamy runners finished the game with over 80 rushing yards apiece and played a crucial role in the game. Wolfe cracked the century mark, running the ball 11 times for 106 yards and a score. Sempko racked up the most carries in the game, toting the ball 20 times for 87 yards and a score. Schaffer-Neitz played a role in short yardage and the red zone, picking up 82 yards and a pair of touchdowns on 11 carries.

“I liked what I saw in the run game. We were missing a couple guys up front tonight, so I’m really pleased with what we were able to do on the ground.” said Keiser.

Shikellamy’s drive stalled out, but a muffed punt got the ball right back to the Braves where they extended the lead on Wolfe’s nine-yard score.

On the ensuing kickoff, in an attempt to keep the ball away from Roman, Shik squibbed the ball upfield where it was fumbled and recovered by the Braves. These back-to-back possessions resulted in 14 more points and the team pushing ahead to a 28-6 lead in the final quarter.

Backed up deep in his own territory, Lopez fired the ball to Dontae Oquendo who picked up 78 yards on a long catch and run. Later in the drive, Roman found the end zone yet again on a nine-yard run. This time the two-point conversion was good, and the Raptors cut the Shik lead to 28-14.

Needing an onside kick, Matthew Martinez kicked a knuckleball toward the Shikellamy hands team that squirted free and was recovered by the Raptors. Driving deep in Braves’ territory again, the Raptors failed to pick up a fourth-and-20, turning the ball over to Shikellamy with 1:08 remaining.

Ford said he was happy with the fight his team showed in a tough football game on a short week.

“We’re still babies. We’re still a young team. We just started football in April.” said Ford. “Every other team we play has been playing football longer than us. Some schools have been playing for 100 years. This is a learning year for us. We expect to win some games, but at the end of the day it’s a learning experience. We played better tonight than we normally play.”

“Coach Ford is an outstanding guy. He was all in on switching film. We didn’t have a lot of time and neither did they, but we at least got to see a little bit of what they ran.” said Keiser. “They have great athletes on that team, and I think our guys did a good job.”

Shikellamy improved to 1-3 overall on the season and will take on Jersey Shore (3-0) next week.

EEA also exits Friday night’s game with a 1-3 overall record. The team will play Bristol (2-0) this coming Friday at 6 p.m.