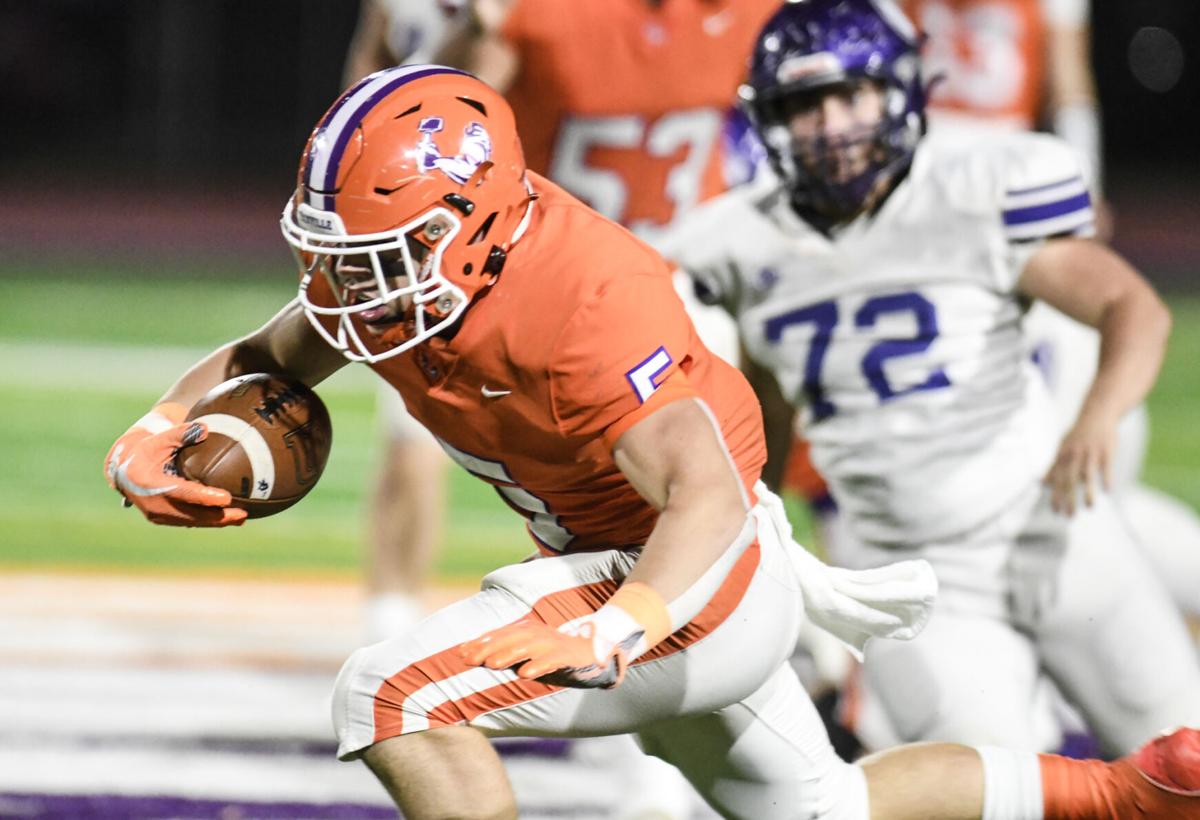 Danville’s Ty Stauffer carries for a touchdown during Friday’s game against Shamokin. 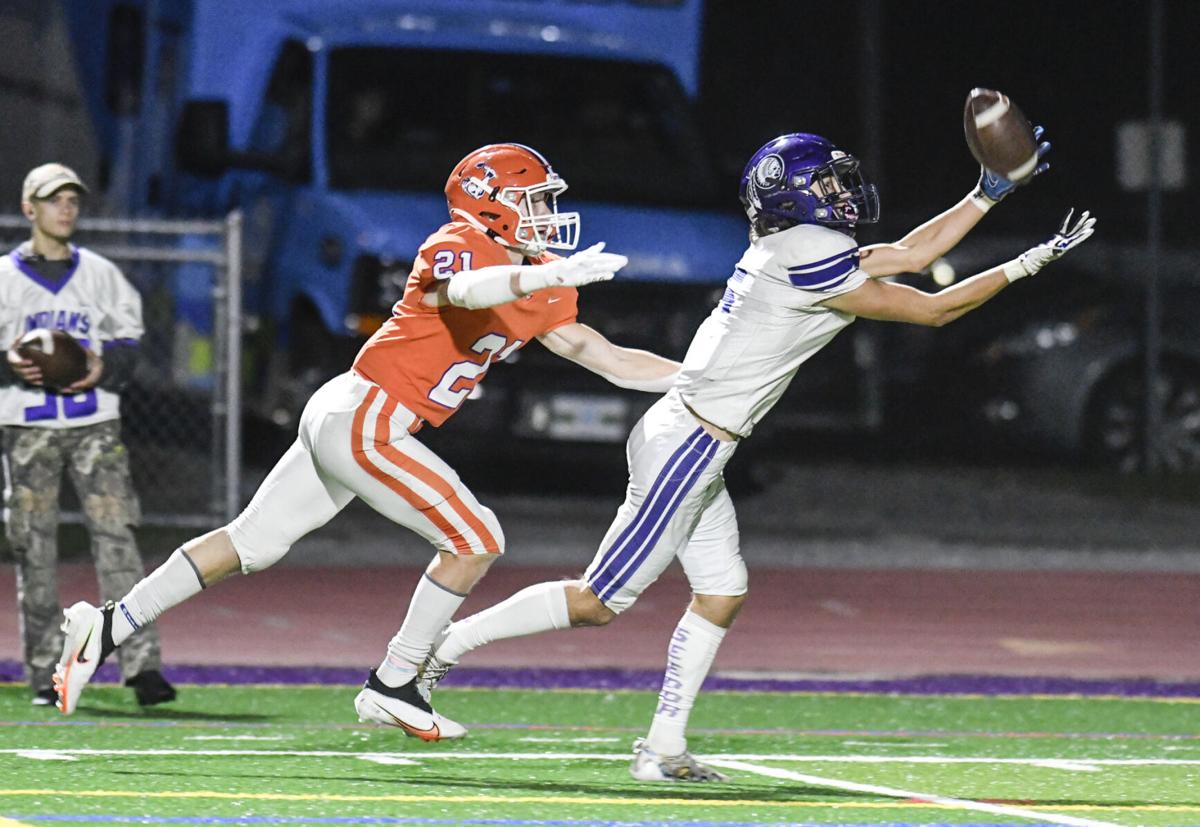 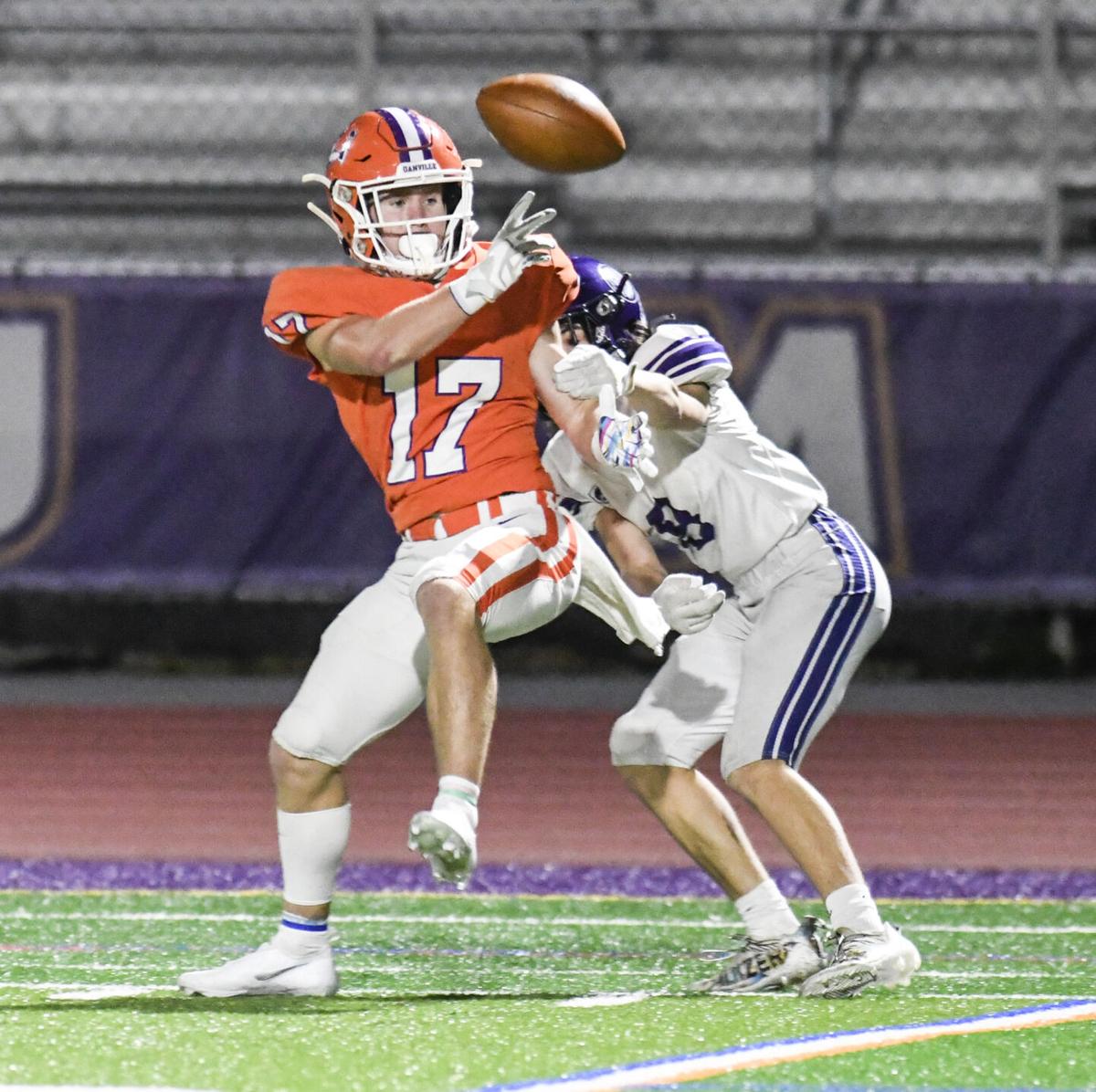 Shamokin’s Chase Pensyl strips the ball from Danville’s Carson Persing which Persing then recovered and ran in for a touchdown during Friday’s game.

Danville’s Ty Stauffer carries for a touchdown during Friday’s game against Shamokin.

Shamokin’s Chase Pensyl strips the ball from Danville’s Carson Persing which Persing then recovered and ran in for a touchdown during Friday’s game.

DANVILLE — Ty Stauffer's ears perked up when he learned exactly how many times he ran the ball Friday night.

The Danville junior's 240 rushing yards? He had enough big gains to figure they would add up.

His five touchdowns? You visit the end zone that often it's not lost on anyone.

The Ironmen leaned on Stauffer with a chance to move to the top of the District 4 Class 3A power rankings, and he delivered a career-best game in a 42-21 win over Shamokin. His 303 yards of total offense and five touchdowns had Danville faithful recalling Terry Gerst in November, 1965, and Stauffer feeling grateful.

"It's very fulfilling. I mean, this is the best feeling after a game," he said. "For everyone to come out, firing on all cylinders and play as a team, it's just a great feeling. I feel very proud."

The Ironmen tied the score at 14 on a Stauffer touchdown catch late in the first half, then posted four of the game's next five TDs — three by Stauffer — to run away for the Heartland Athletic Conference crossover win. The win vaulted Danville (6-3) past Milton (5-4) for the No. 1 seed in Class 3A with one regular-season game to play.

"The first half we played really tough, and it kind of got away from us in the second half," said Indians coach Henry Hynoski. "It just seemed like the second half it wasn't rolling our way. Everything ended up kind of being the worst-case scenario."

Shamokin senior Max Madden rushed for 266 yards and two scores on 37 carries in a workhorse role that's long been established.

Stauffer, however, hadn't run the ball more than 22 times in game in his career (three weeks earlier against Montoursville), and that outing broke his previous high of 18 carries. So 2 1/2 dozen rushes in a game was literally off the charts.

"He's always prepared to do that," said Danville coach Mike Brennan. "His weight room work ethic is really, really good. He's a hard worker, takes care of his body, and just a really tough kid. We didn't get a chance to see everything he could do last year due to injury, but this year he's been 100 miles per hour every week. That's the way he practices; that's they way he prepares; and that's the way he plays.

"He was certainly the star of the show."

The Ironmen were forced to respond to Shamokin throughout the first half. The Indians opened with a 10-play, 61-yard scoring drive capped by Colin Seedor's 19-yard catch on a fade from Brett Nye.

Stauffer tied the score on the first snap of the second quarter, hauling in a 27-yard toss from Madden Patrick on a play-action wheel route. Shamokin went back in front fewer than three minutes later, with Madden breaking a 61-yard gain on fourth-and-1 from the Indians' 30, and then bolting for a 10-yard score.

"We ran the heck out of the football," said Hynoski. "We did some good things in the pass game — our protection was much better. I saw improvement from last week."

The Ironmen wasted a 69-yard kick return by Carson Persing when they were intercepted near the end zone, but they forced a punt with five minutes left and drove to tie.

The 11-play series began with eight consecutive Stauffer runs, moving the ball 53 yards to the Shamokin 5. The Indians brought about fourth-and-goal, and Aaron Johnson lined up a 21-yard field goal in the half's final minute. Instead of kicking, Johnson took a direct snap, ran to the left and pulled up to throw a dart to Stauffer in the back of the end zone for a 14-all tie.

"It was huge," said Brennan. "We felt like that maybe three (points from a field goal) would be a moral victory for them with the way they were controlling the game. To get that deep ... we got down there once and didn't get points inside the red (zone) ... we sort of felt to get down there again and come away with just three points wasn't in our best interest.

"That (play is) something we work all the time, and I certainly I think it swung the momentum back to us a little bit."

"We've been working on it for, like, three weeks," said Stauffer, "and we're just excited to see it pay off."

The Ironmen scored on their first three second-half possessions: a 53-yard Stauffer run; a 3-yard Stauffer run; and a 55-yard pass from Patrick to Persing that included a mid-play fumble. The ball was popped from Persing's arms near the sideline but he ran to recover it downfield in stride to restore a 14-point lead.

Stauffer, who eclipsed 1,000 rushing yards for the season in the third quarter, capped the scoring on his 30th carry with 2:31 to play.

"It was a really tiring game. I was really beat up going into half. You have to push through it so we could get the win," he said. "I'm just thankful our team came out the way we did. Our line blocked really well."