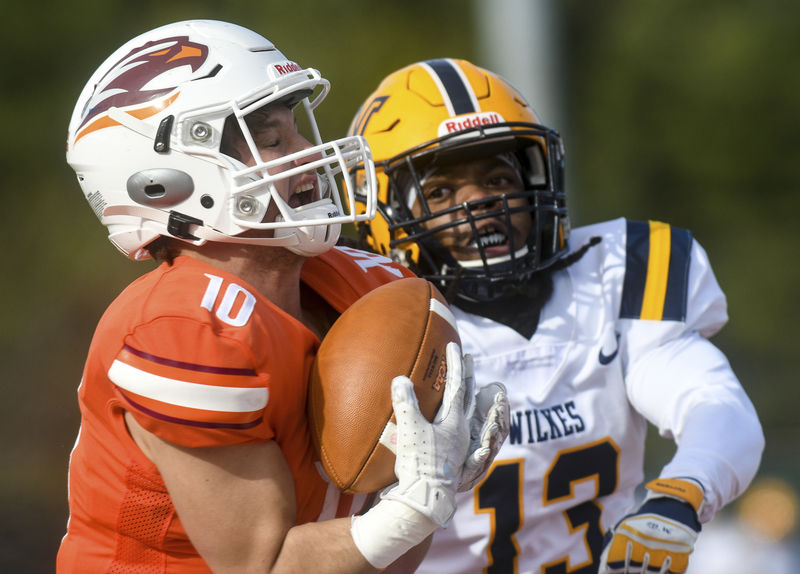 Susquehanna’s Kyle Good makes a catch for a touchdown while being defended by Wilkes’ Ishmael Coleman during Saturday’s game. 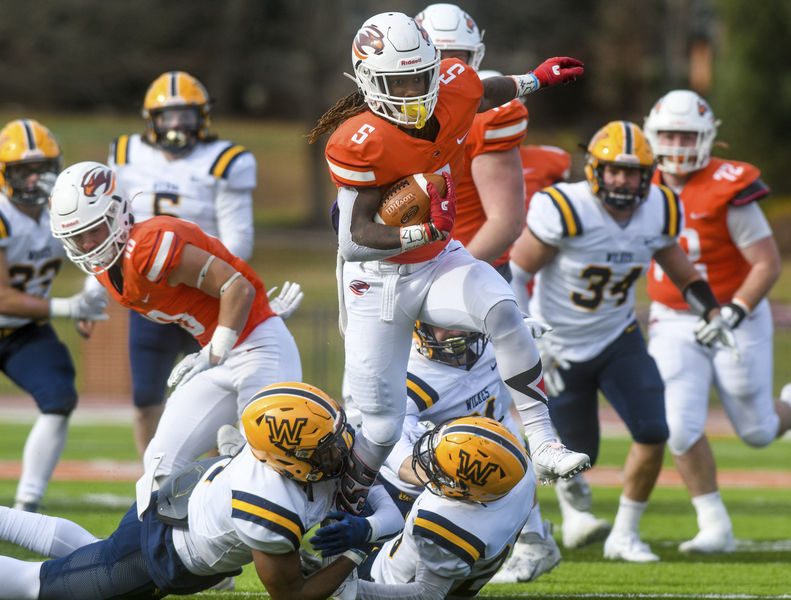 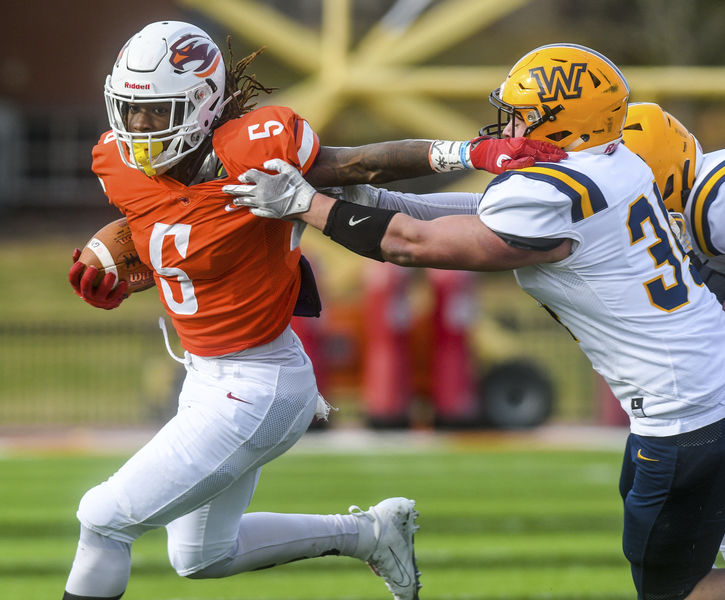 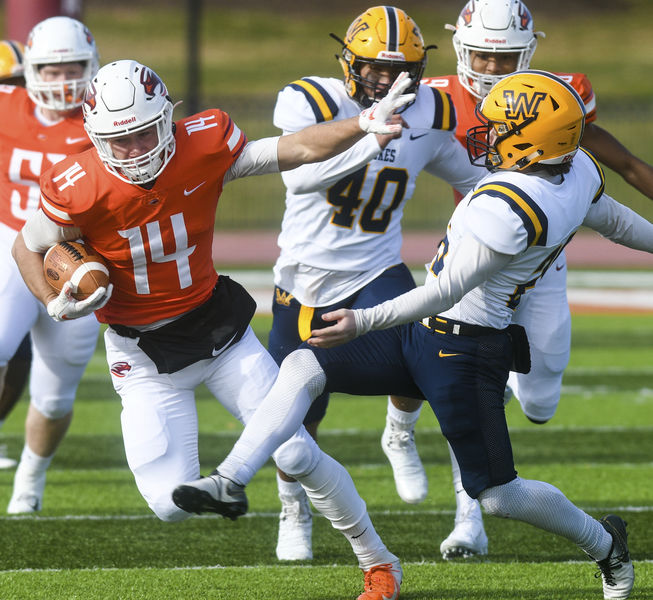 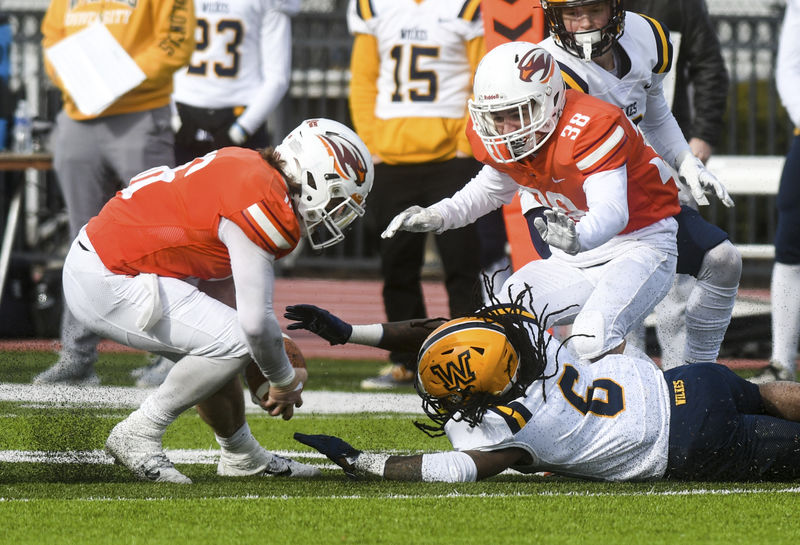 Susquehanna’s Craig Roumes, left, scoops up a fumble from Wilkes’ JaQuan Sheals before returning it for a touchdown on Saturday.

Susquehanna’s Kyle Good makes a catch for a touchdown while being defended by Wilkes’ Ishmael Coleman during Saturday’s game.

Susquehanna’s Craig Roumes, left, scoops up a fumble from Wilkes’ JaQuan Sheals before returning it for a touchdown on Saturday.

SELINSGROVE — In its first meeting with Wilkes since 2011, the Susquehanna River Hawks put the Colonels through nearly four hours of boot camp.

“All three phases of the game played very well,” said SU head coach Tom Perkovich. “With that many points, a lot goes into it.”

A lot of execution, and perhaps, some frustration of missing the NCAA Division III playoffs by the slightest of margins.

“We wanted to send a message to the NCAA that they made a mistake with not putting this team in (the playoffs),” said senior captain Mitch Carsley.

Three of Carsley’s punt returns, spanning 40, 45 and 49 yards, helped set up Susquehanna touchdowns. Carsley also threw a 27-yard pass to set up another touchdown, and added a 45-yard reception to set up a fifth. Though he didn’t score himself, Carsley helped set the table for SU’s explosive day.

“Coach (Alan) Zemaitis really prides himself on special teams and makes us pride ourselves in it,” Carsley said. “The game plan was to fake like I was going outside, put a foot in the ground, and go.”

“I was on defense my first year and saw Cam play,” Ellington said. “He was a good back. I really didn’t think about the numbers, but 19 is a good number to enter the senior cam

Ellington ended SU’s (10-1) season with 1,235 yards and 19 touchdowns on 183 carries. Ruisch, meanwhile, carved up Wilkes’ defense for 219 yards and four touchdowns, two to Kyle Good and one each to Robert Marks and Frank DePaola.

Defensively, SU allowed 333 yards passing and a trio of touchdowns by Colonel dual-threat quarterback Jose Tabora, but otherwise, the River Hawks were their usual, relentless selves.

“We struggled a little bit early on,” said senior linebacker Craig Roumes. “But the offense picked us up.”

Roumes scored his third defensive touchdown of the season Saturday, returning a fumble 22 yards to make it a 21-3 game in the first quarter. Tabora put up numbers passing, but he was held to 19 yards on 11 carries and did not score a touchdown. The Colonels’ ground game was held in check as well, registering only 47 yards on 27 carries against SU’s defense.

“That was the game plan, attack the quarterback,” Roumes said. “That’s the game plan all the time. It feels great to go out a winner, but what we tried to tell the guys in this is just the beginning. They need to keep this going.”

“Winning at home is important to us, and we want them to understand that this is a tough place to play,” Perkovich said. “We started a ton of drives over the 50 today, and with our offensive firepower and explosiveness, that’s big for us.”

The River Hawks posted their first 10-win season since 1991, improved to 6-3 all-time in postseason play and set a new school record for points in a single season, with 476.