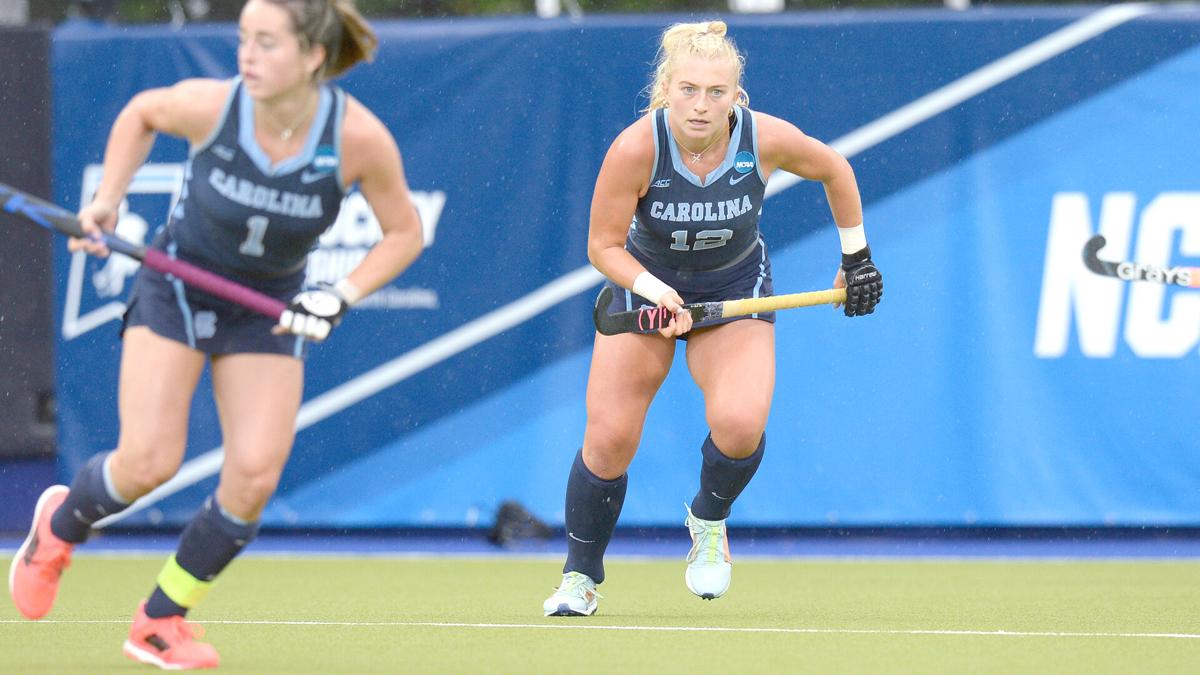 North Carolina’s Cassie Sumfest, a Lewisburg graduate, runs up the field during the Tar Heels’ Final Four win over Iowa in the spring. 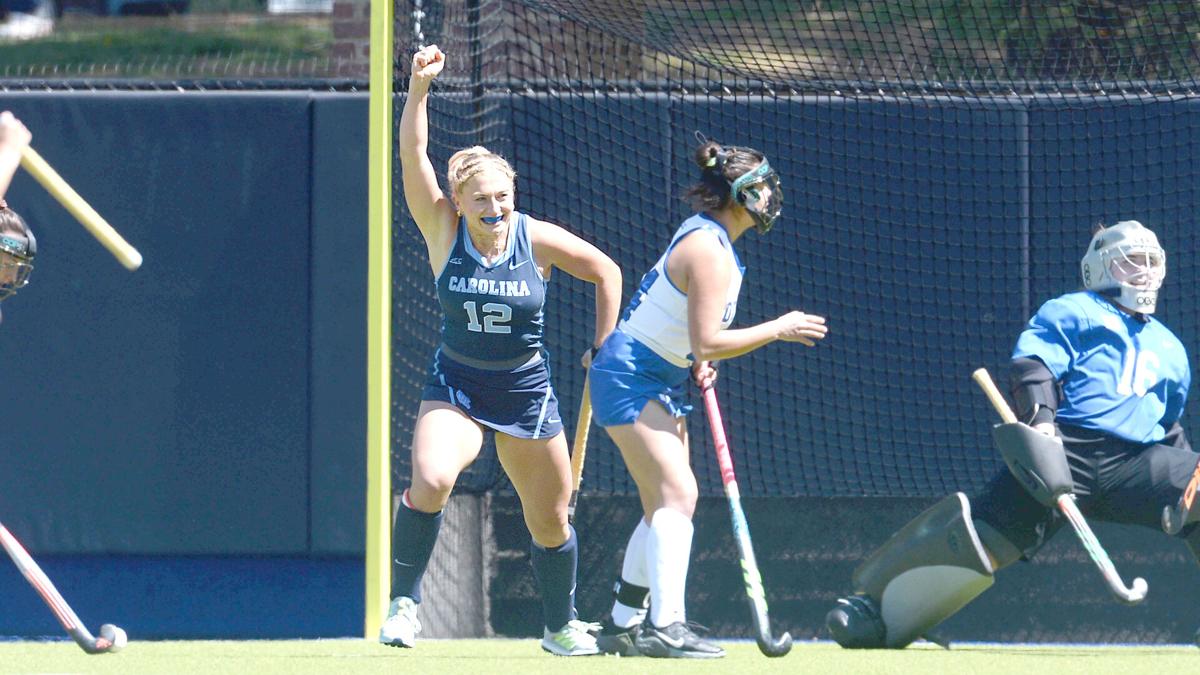 North Carolina’s Cassie Sumfest, a Lewisburg graduate, runs up the field during the Tar Heels’ Final Four win over Iowa in the spring.

Cassie Sumfest has a fan in Karen Shelton.

If that doesn’t move the needle for you, it’s a lot like having a fan in Geno Auriemma.

Shelton is the architect of the North Carolina field hockey program which has claimed nine NCAA championships and made her the winningest coach in college history with 711 victories.

Shelton’s teams, particularly those that have won the last three NCAA titles, are akin to college all-star teams. There is no shortage of high school stars wishing to enroll at Chapel Hill.

So it spoke volumes about her ability when Sumfest, a 2017 Lewisburg graduate, was a Tar Heels starter from Day One.

“When I looked at colleges, I knew North Carolina was always in the Final Four and that was something I was looking for,” Sumfest said. “I knew I would play top competition coming here.”

More of a scorer and facilitator for the Green Dragons, Sumfest returned to her USA Field Hockey roots as a defender in college. North Carolina went 41-5 with two ACC championships and the 2018 national title in Sumfest’s first two years. Then, in the spring of 2019, Sumfest suffered a torn right ACL that could have very well cost her more than just her junior season.

While she watched from the sidelines, the Tar Heels enjoyed a second consecutive perfect season with two freshmen — redshirt Romea Riccardo and high school All-American Madison Orobono — paired with veteran defender Courtnie Williamson. That defensive trio remained intact for the 2020 season, meaning Sumfest would have likely been a reserve at best had it not been for the versatility that helped make her a four-time All-State first-team honoree at Lewisburg.

Following her recovery, Sumfest attempted a shift to midfielder. She not only won a starting job, but she was ultimately named to the National Field Hockey Coaches Association All-South Region Second Team while North Carolina secured a championship three-peat for the second time in program history.

“In high school, I played forward and center mid; then in college I played left back, center back and then center mid,” she said. “Because of the background I had, I was able to make those switches fast.”

The opportunity for Sumfest to start was created by the graduation of three-year starting mid Feline Guenther as well as another starter in Megan DuVernois. Those voids were filled by Sumfest and Meredith Sholder, the fourth-most prolific goal scorer in U.S. high school history, who returned after missing the 2019 season with a broken foot. Sholder moved from forward following the addition of Penn State transfer Paityn Wirth, a 2019 Greenwood graduate.

Sumfest tied for second on the Tar Heels with six goals and ranked third with 14 points while starting all 20 games.

“Because of the returners we had in the backfield and our losses in the midfield, we needed her to play in the midfield,” Shelton said. “She embraced that challenge and successfully made the transition. Additionally, she jumped back into being an important part of our penalty corner offense and defense.

“She was so happy to be back on the field this year and willing to do anything we asked of her.”

The team was selected after a series of on-field evaluations, but Sumfest could have also made a compelling case via a Zoom call if circumstances dictated it.

“I would just show how I came back from injury with determination and hard work, and how I can be versatile and go from defense to center mid in a span of two years ... plus my growth overall from freshman year to senior year, and to still be improving,” she said. “This season I was usually under some strong pressure by top defenders who converged in the middle of the field, and that required strong decision-making. You have to play with speed, keep your eyes up, and be strong with the ball. I would say (I improved) with faster decision-making and distribution skills, finding the people in front of you or around you and finding them with the ball.”

Though Sumfest excelled in her new midfield role during a college season played in two halves over parts of six months, she was chosen as a defender for the USWNT. Still, her versatility could loom large when the 36-player national team is trimmed to fewer than half as many for the travel teams that attend international competitions.

“I just think (the position switch) was great experience,” she said. “It made me feel closer to the team in some sense, to be on both sides of the field — up attacking and back defending. Maybe it wouldn’t have happened if I wasn’t injured; I might have stayed at defense. But after I had a game under my belt (at mid) I felt comfortable.”

Sumfest was one of six Tar Heels named to the USWNT, including Orbono, Wirth and National Player of the Year Erin Matson. The national team doesn’t reconvene until August when North Carolina begins preparation for its season, but the girls will follow a supplemental training regimen and join Team USA at season’s end.

“I’m definitely more confident going in now than I was for last season,” she said. “When I returned to playing again (after the injury), I had a lot of nerves. So this season is going to be a huge deal. Making it four national titles in a row would be the greatest thing ever. We have almost everyone back, so the team will be pretty much the same, if not better, but nothing is certain and that’s what keeps us all really motivated.”

Sumfest has two seasons of college eligibility remaining with the addition of a year the NCAA granted all student-athletes due to the COVID-19 pandemic. However, she plans to make this upcoming season her last (“Six years is a lot,” she said.), and to explore opportunities with the USWNT and beyond, including the FIH Hockey Pro League.

“Cassie worked so hard to come back from her injury,” Shelton said. “She’s a great student as well, and she pours that same work ethic into field hockey, putting in extra time for skills and conditioning.

“We’re just so pleased — both for her and for our team — that she’s back on the field and playing at such a high level.”