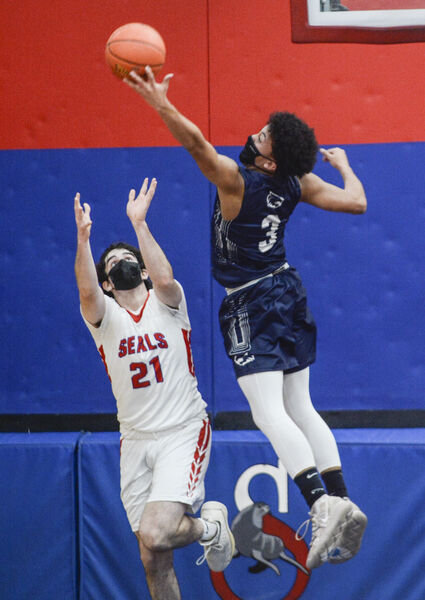 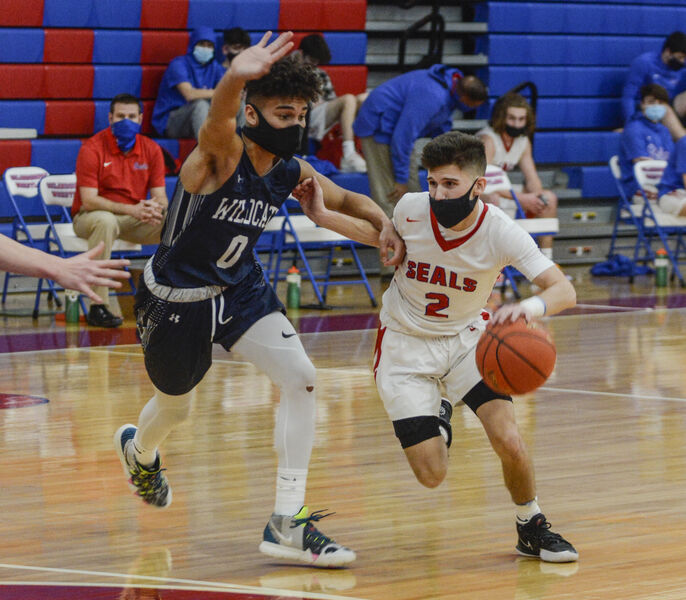 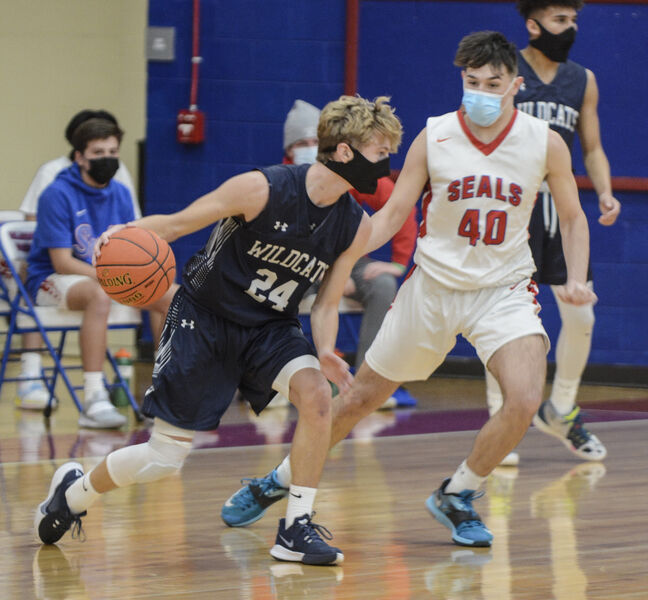 Mifflinburg’s Cannon Griffith, left, dribbles on the perimeter as Selinsgrove’s Spencer George keeps close to defends him during Friday’s game.

Mifflinburg’s Cannon Griffith, left, dribbles on the perimeter as Selinsgrove’s Spencer George keeps close to defends him during Friday’s game.

SELINSGROVE — With sky-high expectations for the 2021 season, Mifflinburg's nerves were apparent in the first four minutes of Friday night's re-opener with Selinsgrove.

Though the Seals managed just two foul shots in that early span, the Wildcats turned over the ball in transition several times and missed their first three shots of the game.

"We were a little rusty. They were speeding us up a little bit," Mifflinburg senior guard Isaiah Valentine said.

Valentine got himself going by hitting the boards, finishing with game-highs in points (27) and rebounds (17) as the Wildcats improved to 2-0 with a 59-42 win over Selinsgrove in Heartland Athletic Conference-Division I action.

"Once coach got us settled down, we started playing as team," Valentine said.

"They absolutely killed us on the glass," Selinsgrove coach Ethan Hummel said. "We talked about that beforehand; we didn't accept the challenge. Isaiah basically worked his butt off, and won every loose ball in the air for them."

Mifflinburg started slow, missing its first three shots and turning over the ball four times in the first four minutes.

"I think we turned the ball over four times in transition within maybe five or six possessions in the early part of the game," Mifflinburg coach Andre Roupp said. "That hurts. When we valued the ball and ran our offensive sets, we got good looks."

The Wildcats (2-0 overall and HAC-I) was ignited when Valentine found Gabe Yoder for corner 3. That sparked eight straight points as Mifflinburg opened an 8-2 lead. Valentine scored the last eight points of a 16-point quarter for Mifflinburg. When freshman Tyler Reigle knocked down a 3-pointer to open the second period, Mifflinburg had a 19-6 lead.

Selinsgrove didn't go away, though. Isaiah Ulrich and Ryan Reich had back-to-back baskets to pull the Seals within nine. Randy Richter later hit a 3-pointer for Seals to cut the lead to 25-17 with 2:43 left in the first half.

Cannon Griffith scored on back-to-back drives for Mifflinburg as the Wildcats built a 17-point advantage. The Seals cut the lead to 11 with a Brett Foor 3-pointer at 3:15 of the third, but that would be Selinsgrove's last gasp.

The Wildcats scored six straight points, the last on a Griffith foul shot with six seconds left in the third quarter for an 18-point lead.

In addition to Valentine, the Wildcats had two other players score in double figures. Yoder and Jake Young each had 10 for Mifflinburg.

Foor led the Seals with 12 points, while Spencer George scored eight of his 11 points in the fourth quarter.