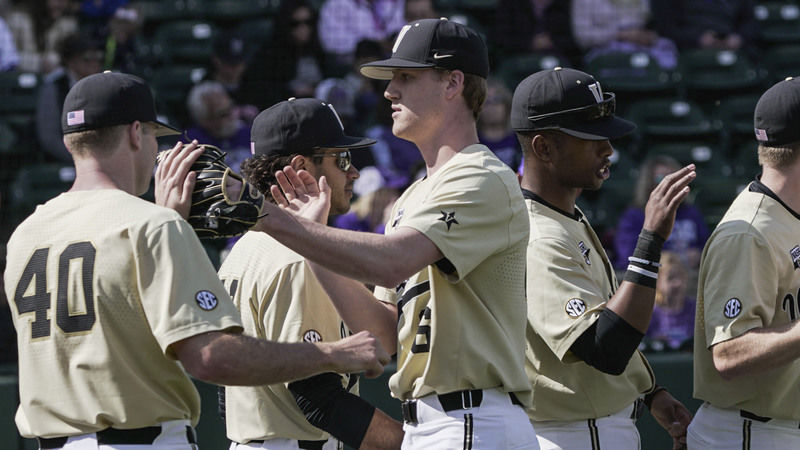 Vanderbilt freshman Thomas Schultz, a Lourdes Regional graduate, right, is congratulated by teammates as he leaves the field during a game earlier this season. Schultz was forced return home when Vanderbilt closed amid concerns over the COVID-19 pandemic. 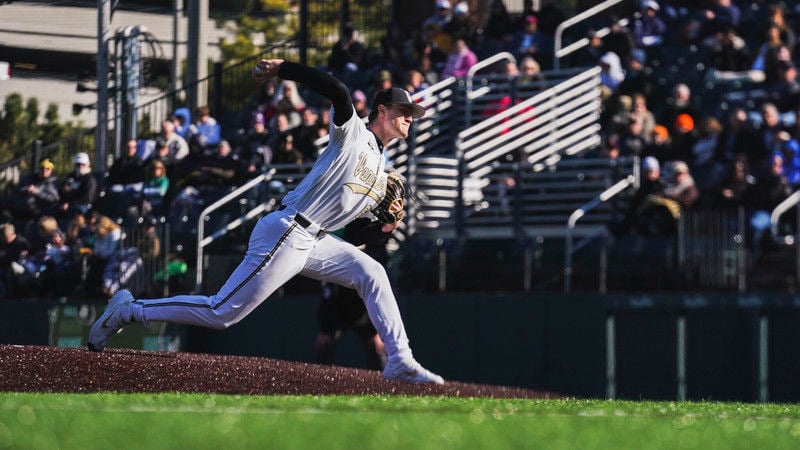 Vanderbilt’s Thomas Schultz, a Lourdes Regional grad, delivers a pitch during a game earlier this season.

Vanderbilt freshman Thomas Schultz, a Lourdes Regional graduate, right, is congratulated by teammates as he leaves the field during a game earlier this season. Schultz was forced return home when Vanderbilt closed amid concerns over the COVID-19 pandemic.

Vanderbilt’s Thomas Schultz, a Lourdes Regional grad, delivers a pitch during a game earlier this season.

Thomas Schultz cleaned out his locker in the Vanderbilt baseball clubhouse Saturday, feeling almost as though he was getting ready for a weekend road trip with the Commodores.

Instead, he was preparing for a one-way trip home after concerns over the COVID-19 pandemic ended his freshman season and closed the college for the remainder of the spring semester.

“Everyone was packing their bags,” he said, “but this time I don’t know when I’ll be back.”

Schultz, a Lourdes Regional graduate, had a sparkling start to his collegiate career, posting a 0.66 ERA over his first 13 2/3 innings for Vandy, five of which came in a March 1 start.

The 11th-ranked Commodores moved to 13-5 Wednesday night with an 11-2 home victory over Toledo. The following day, the Southeastern Conference announced that all regular-season sports would be suspended until March 30 and then would be re-evaluated. On Friday, the SEC shifted to a blanket suspension of games, practices and team meetings through at least April 15.

The moves were made “due to continuing developments related to the coronavirus (COVID-19),” read a statement.

“When the suspension hit we had a meeting about it, and we were planning on all staying and training and working out until the suspension was over,” said Schultz. “Literally five minutes later we got notice of the cancellation. We went from full-go to staying and waiting it out to everything just being cancelled.”

In addition, Vanderbilt announced its intention to switch to online and alternative learning beginning Monday, and encouraged undergraduate residential students to move out. Saturday, the school revealed a non-residential undergrad who had been on campus during the past week tested positive for coronavirus.

“They pulled us into the lounge area to tell us about the season,” Schultz said. “Once (Vandy coach Tim) Corbin’s voice started breaking up, you looked around at the juniors and seniors and tears started coming out. It was a sad, dark mood. No one knew what to say, honestly.

“The way I can put it best is it felt like a dream; it really did not feel real. I’m just now starting to fully grasp the situation, a couple days following the announcement. No one knew what to say or do.”

Late Friday, the NCAA announced it would grant spring season athletes another season of eligibility.

“Council leadership agreed that eligibility relief is appropriate for all Division I student-athletes who participated in spring sports,” the NCAA’s Division I coordination committee said in a statement. “Details of eligibility relief will be finalized at a later time. Additional issues with NCAA rules must be addressed, and appropriate governance bodies will work through those in the coming days and weeks.”

“I know for juniors that will be very beneficial, guys on the cusp of getting drafted,” said Schultz. “Their draft season was taken away, so they’ll be able to come back for their senior year, graduate and still have a year to play. I (granting an extra year) it had to be done. I don’t know if it was the right move cancelling so early. You never know, there’s a chance we come back (this season). The NCAA president said, ‘Never say never.’ I hope we do.”

Until then, Schultz said he’ll shift to “training mode” rather than “competitive mode,” lightening his pitch count by 20 or so per workout to stay sharp, while finishing his semester online.

“The professors did a pretty good job pushing back due dates from last week on giving us good instruction on what’s to come,” he said. “I’m still anxious to see what it’s going to be like. I’m a hands-on, visual learner, and I don’t know how it’s going to be over a computer.”