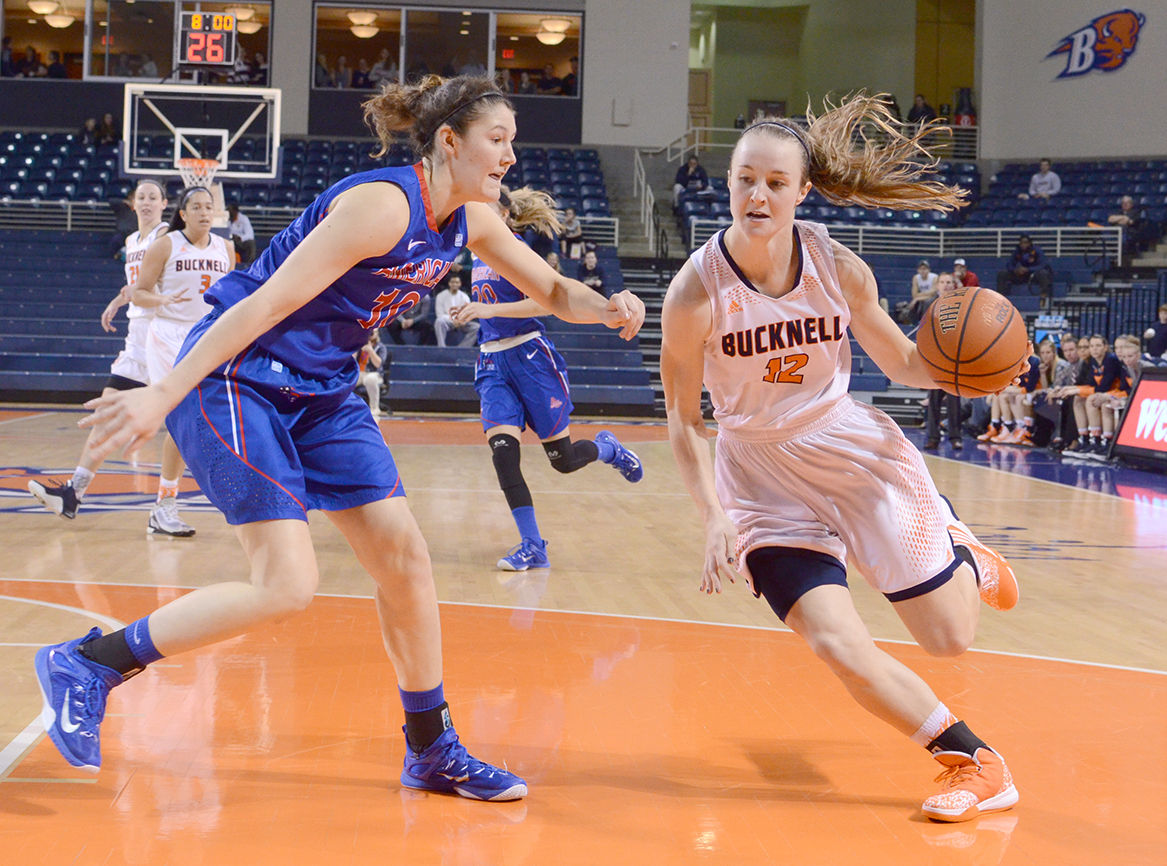 Bucknell’s Claire DeBoer tries to get past American’s Lauren Crisler during Wednesday’s game. 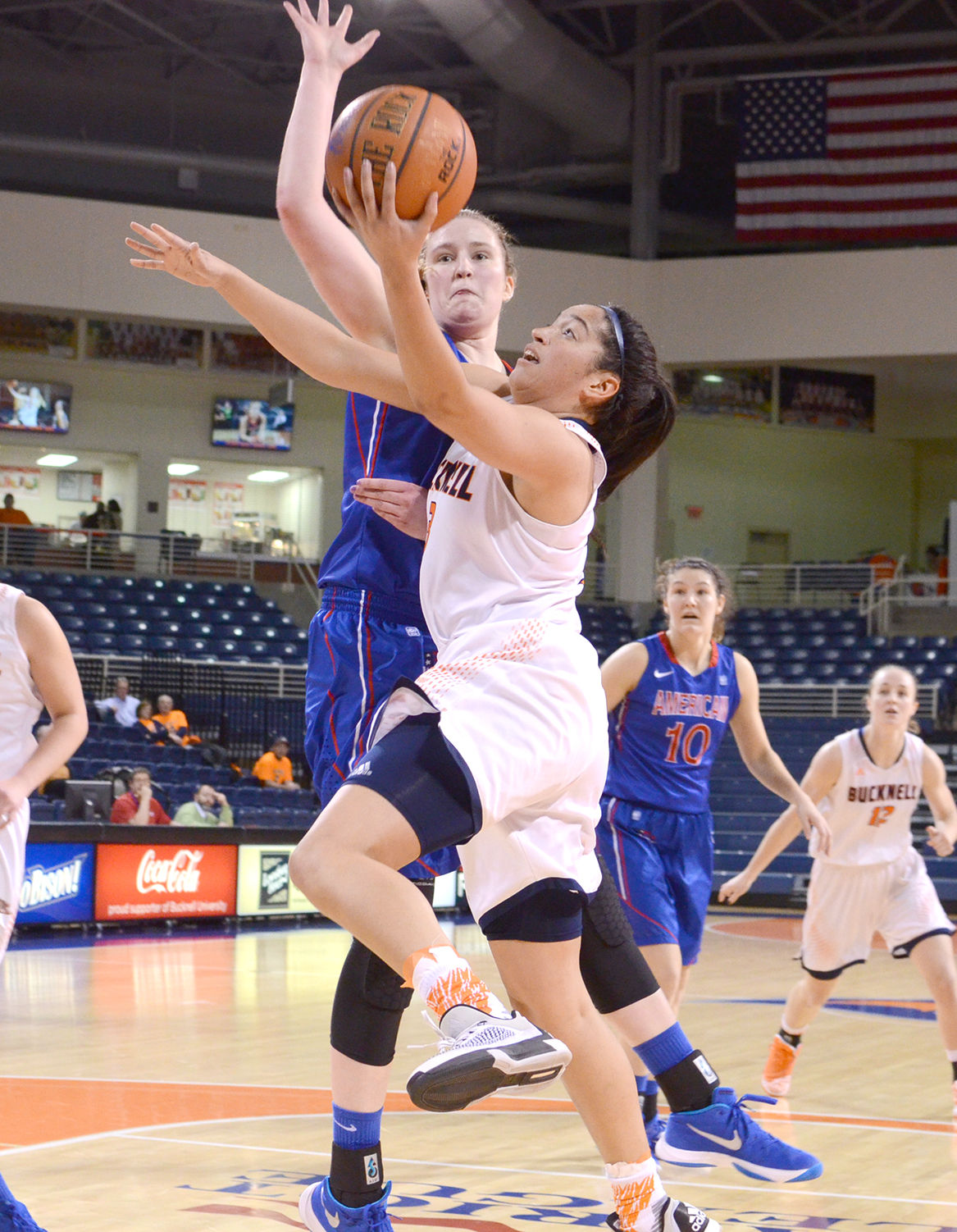 Bucknell’s Tyler Craig drives to the hoop during Wednesday’s game against American. 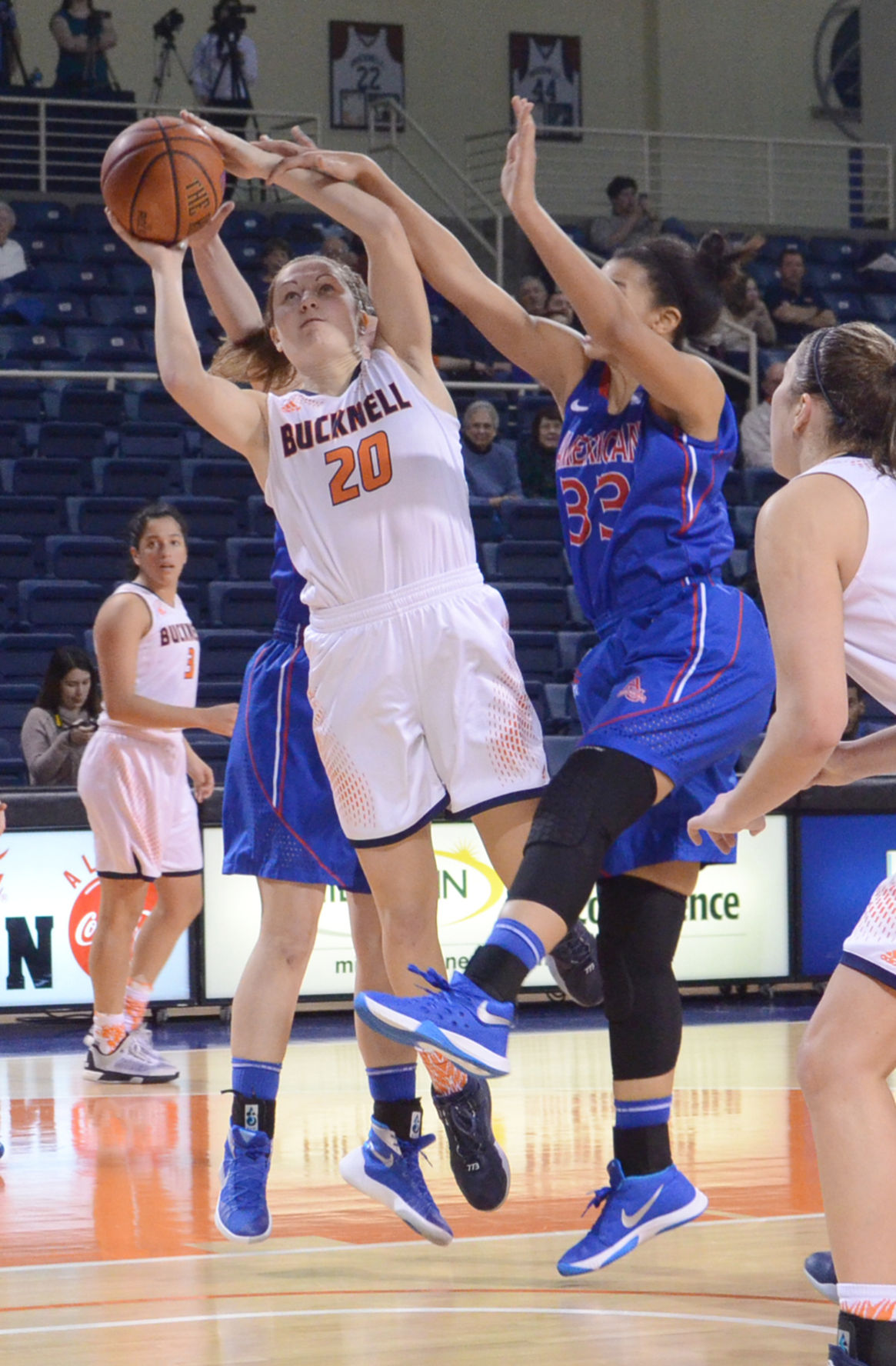 Bucknell’s Kate Walker takes a shot in traffic during a recent game against American at Sojka Pavilion in Lewisburg. Walker is one of three freshmen, along with Kyi English and Katie Slagus, who have emerged as contributors for the Bison.

Bucknell’s Claire DeBoer tries to get past American’s Lauren Crisler during Wednesday’s game.

Bucknell’s Tyler Craig drives to the hoop during Wednesday’s game against American.

Bucknell’s Kate Walker takes a shot in traffic during a recent game against American at Sojka Pavilion in Lewisburg. Walker is one of three freshmen, along with Kyi English and Katie Slagus, who have emerged as contributors for the Bison.

LEWISBURG — After all Bucknell’s Claire DeBoer accomplished Wednesday night, she almost had to sit back and watch the wrong Grosse Pointe (Mich.) native become the hero.

American’s Maria Liddane (Grosse Pointe North H.S.) just missed a short jumper at the end of regulation, sending the game into overtime. In the extra session, DeBoer (Grosse Pointe South H.S.) nailed a big 3-pointer en route to her game-high 25 points as the Bison escaped Sojka Pavilion with a 60-54 victory.

"She did everything for us," Bucknell coach Aaron Roussell said of DeBoer. "We weren’t even running plays; we were just kind of saying, ‘Everybody get out of the way and get her the ball.’"

The Bison won despite shooting less than 33 percent from the floor for the game — including a 4-for-16 effort from beyond the arc — and committing 16 turnovers.

"They were very physical and defended us very well," Roussell said. "The physicality that they showed, it took us a while to adjust to it — I don’t know that we ever did adjust to it."

Despite scoring most of her points in the paint, DeBoer’s biggest shot of the night was arguably her trey in overtime.

"I definitely thought it had a chance," DeBoer said. "(The defender) was playing off me a little bit, so I thought, ‘Why not take it?’"

Once again, the Bison got some big moments from their freshmen. Point guard Kyi English buried a jumper with five seconds left in regulation to tie the game at 46. Shooting guard Kate Walker scored eight of her 11 points in the extra session.

"Great poise at that point," Roussell said of English’s big shot at the end of regulation. "She put the ball on the floor and (made) a soft little jumper."

Walker, who was 1-for-5 from the 3-point line through the first four quarters, drilled a trey from the corner to give Bucknell a four-point lead with 3:23 left in overtime.

"I’ve been struggling a little bit in games from the 3-point line," Walker said. "At that point, I was just thinking, ‘legs,’ because I had been short a lot over the past two weeks."

The Bison eventually got the lead to nine in overtime before Liddane — who played AAU ball with DeBoer back home in Michigan — hit a 3-pointer in the closing seconds for the final margin.

"We were playing with house money a little bit," Roussell said when asked why his team was able to turn it on in OT. "We were fortunate enough to get to overtime."

DeBoer, who finished just two points off her career high, made 10 of her 19 shots from the floor. She had exactly half of the Bison’s points before English’s jumper sent the game into overtime.

"I just tried to keep my attacking mind set," DeBoer said. "I would shot fake and try to go by."

Roussell had three freshmen on the floor in the final minute of regulation. In addition to the heroics by English and Walker, first-year post player Kaitlyn Slagus tied teammate Jacquie Klotz for game-high boards with seven.

For the night, the Bison out-rebounded American 48-28. Seventeen of those rebounds were on the offensive end, leading to 11 second-chance points for Bucknell.