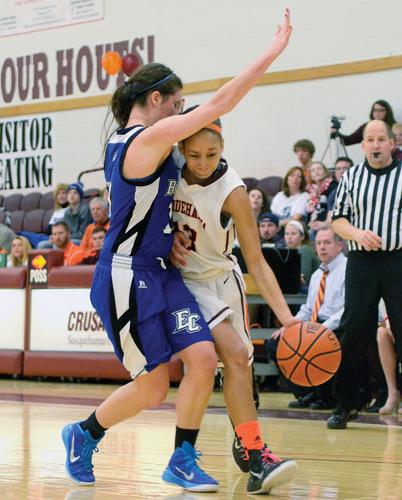 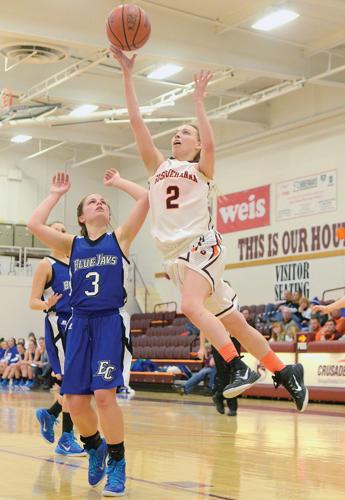 Susquehanna's Sofia Schedler goes up for layup in front of Elizabethtown on Saturday at Orlando W. Houts Gymnasium. 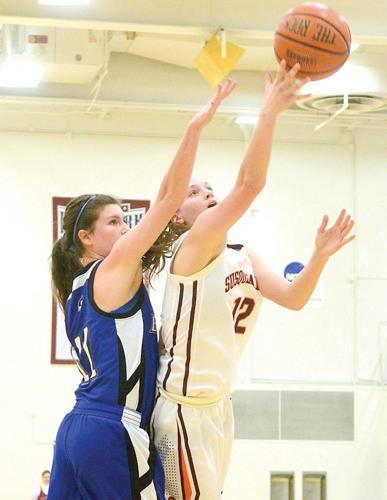 Susquehanna's Sofia Schedler goes up for layup in front of Elizabethtown on Saturday at Orlando W. Houts Gymnasium.

SELINSGROVE — While it wasn’t a must-win in terms of qualifying for the playoffs, Saturday’s game was important for the Susquehanna women all the same.

The Crusaders had an opportunity to play their way into the Landmark Conference tournament’s No. 3 seed — and away from league-leading Scranton.

Elizabethtown had the same motivation and rode it to a 74-60 win Saturday over Susquehanna at O.W. Houts Gymnasium.

"I just didn’t see emotional fire in our team," Crusaders coach Jim Reed said. "We got out-toughed and outworked by Elizabethtown.

"We just didn’t have the same defensive intensity as we did (Wednesday) at Goucher. At this time of the year you’ve got to get stops," he added.

The Blue Jays jumped out to a 12-0 lead in the opening minutes and never looked back, locking up a date with second-seeded Catholic on Feb. 25. Susquehanna (17-7) will travel to Scranton that day to face a Royals team that won 77-38 the last time the Crusaders visited.

SU sophomore Nikki Komara and freshman Angie Schedler each had 17 points to lead the way for Susquehanna.

After taking the 12-0 lead, Elizabethtown kept the margin above 10 points throughout the first half, eventually leading 38-22 at the break.

An 8-2 run by the Crusaders over the last few minutes of the half had them threatening, but Forjan nailed a 3-pointer to close the half.

The Crusaders appeared more engaged in the second half, but mistakes at both ends of the court prevented them from cutting the deficit to single digits. They got within 14 with more than 10 minutes left in the game, but the Blue Jays ripped off a quick 9-2 run to push the gap to 21.

In the last few minutes, with Susquehanna fouling to stop the clock, Elizabethtown knocked down its final six free throw attempts to salt away the win.

The loss was Susquehanna’s fourth in five games, all against Landmark foes.

The Crusaders occupied the second spot in the conference two weeks ago but settled for the No. 4 seed. Senior guard Jonaida Williams believes the key to success against the Royals will be Susquehanna’s ability to dictate tempo.

"We need to stop worrying so much about our opponents and play our game," she said. "We know how to play basketball; we know our strengths and we know our weaknesses."

"We have to play with some emotion and intensity," Reed added.

An upset would put Susquehanna in the Landmark tournament final for the first time in program history.