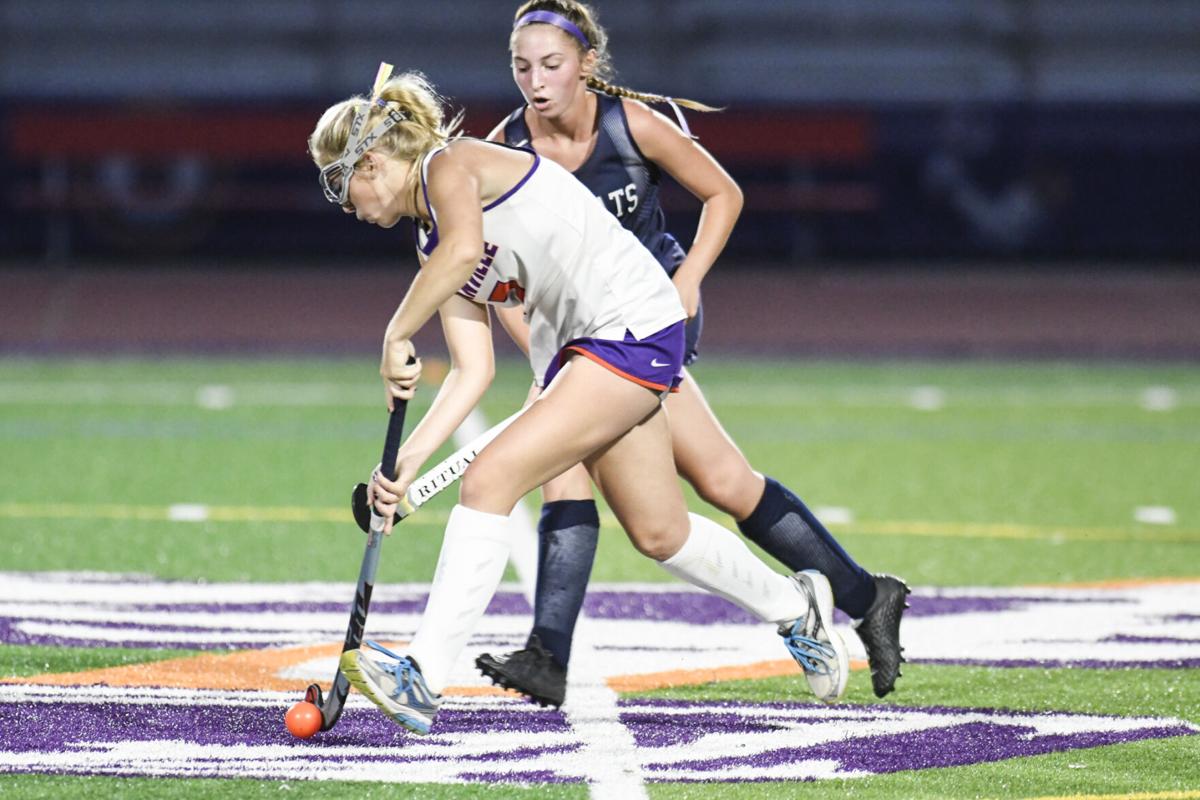 Danville’s Velvet Sterowski-Heck tries to get past Mifflinburg’s Sara Harter during Tuesday’s game. 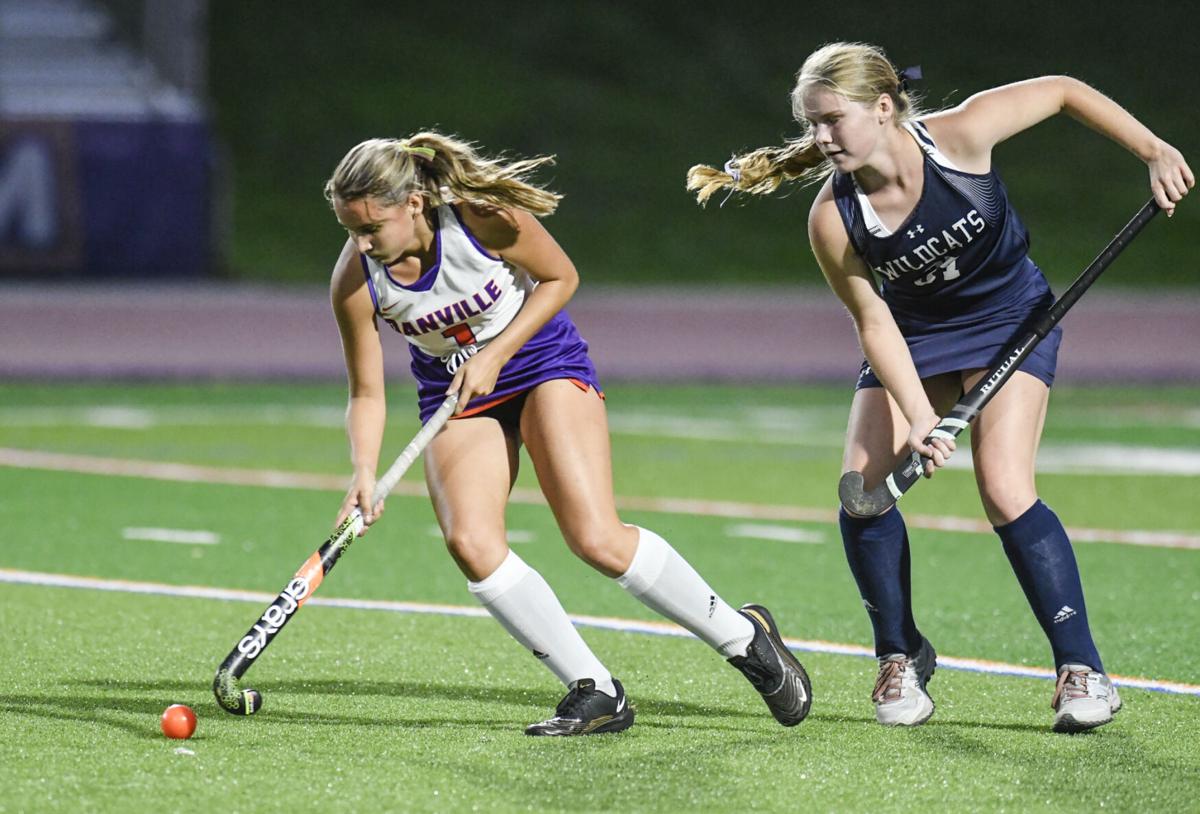 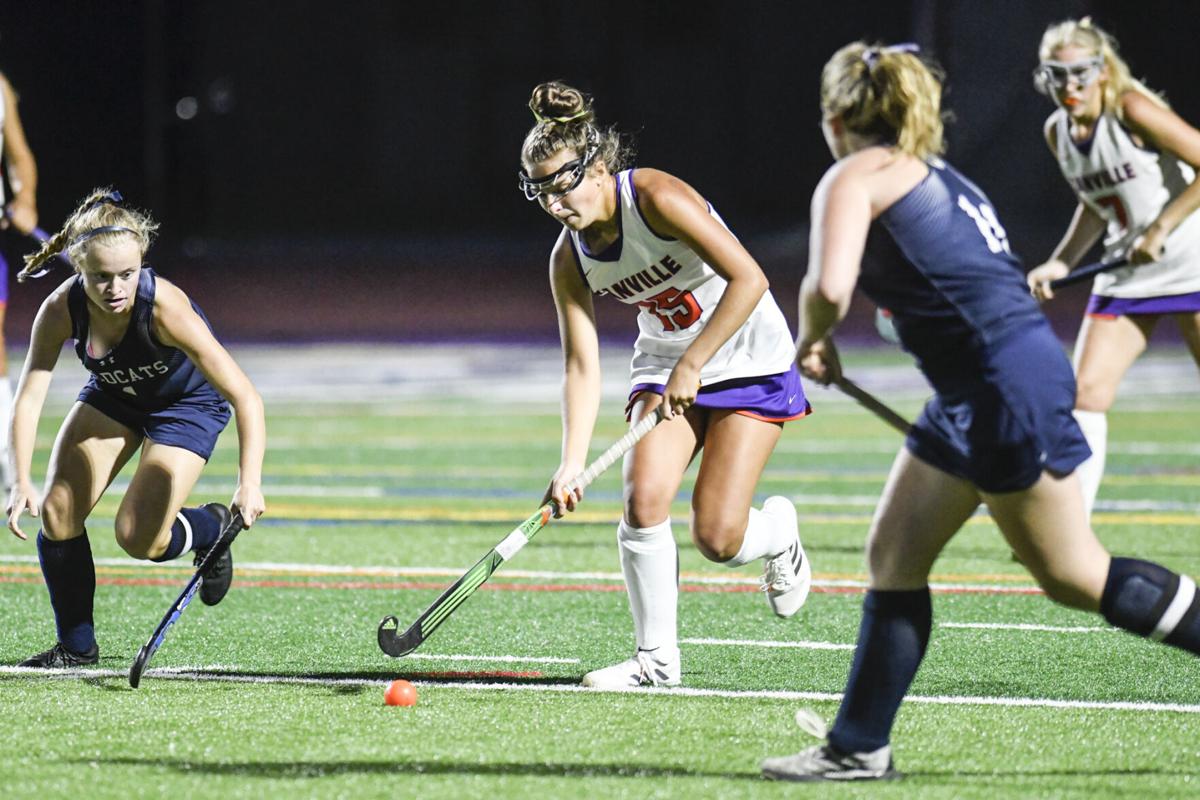 Danville’s Leah Auman races forward with the ball during Tuesday’s game against Mifflinburg.

Danville’s Velvet Sterowski-Heck tries to get past Mifflinburg’s Sara Harter during Tuesday’s game.

Danville’s Leah Auman races forward with the ball during Tuesday’s game against Mifflinburg.

DANVILLE — Shots came at Kaitlyn Gabel at an unforgiving clip during Tuesday's game against Mifflinburg.

Danville's junior goalie stopped all but a couple of them, and though she didn't actually stand on her head, she played off the turf several times and literally bent over backwards at one point to make a save.

"I love getting shot on," Gabel said with a laugh. "Sometimes I don't, when it's really tough, but every time a goal goes in, I say, 'I have to redeem myself.'"

Gabel was credited with 26 saves in the Ironmen's 2-1 loss, a stellar performance that's shaded toward the routine in her second year as a starter. She turned away 18 Selinsgrove shots a week earlier in a 4-0 loss to the 16-time defending district champion. Last season, Danville gave up 15 total goals to the Seals in two losses.

"Our defense is a huge help for me," she said. "They have saved me so many times."

The Ironmen (2-5 overall, 1-3 Heartland-I) stood up to Mifflinburg's attack throughout the first half Tuesday. Wildcats junior Caeleigh Holohan whistled a pair of hard shots from the right side of the circle to test Gabel early on, and Sara Harter had a pair of point-blank looks stopped off their first corner.

The second quarter was barely a minute old when Claire Hayes slid the ball from near the baseline left of the cage, through Harter, to Makenna Hauger in front for a goal.

The Wildcats quickly followed with a pair of corners, both of which were stopped. Danville attempted to clear the ball out of its defensive end, but Rachel Erickson sent it back down the middle of the field and into the circle at Gabel's feet. She couldn't immediately locate the ball around her pads, and Hayes pounced for a 2-0 lead at the 6:48 mark.

Mifflinburg couldn't tack on, despite closing the half with four more corners in the final six minutes. Ironmen defenders Velvet Sterowski-Heck, Camryn Hess and Hannah Flick were strong around the circle, and Paige Biddinger made several effective flies on corner plays.

"They scored back-to-back, basically — it was that five minutes where the girls took a step back — but they came off at halftime, and, to be honest, they said to us, 'This is what we're doing (wrong),'" said Ironmen co-coach Marah Biddle. "When we were able to bring the whole team together, they all knew individually what was happening ..."

"They just needed to get together to regroup," co-coach Sarah Biddle added.

Danville sophomore Bella Gonzalez-Jenkins won possession in the midfield frequently at the start of the third, helping to switch the momentum. Mifflinburg threatened in only one brief stretch of the period, in a sequence similar to its second goal. A corner failed to produce a shot, but the ball was soon sent back into the middle for Hayes, whose attack was stopped by Gabel on the turf near the left post.

"After we get to halftime, have a good talk (and make adjustments), everyone starts getting more aggressive," said Gabel, who had 15 second-half saves. "I'm always trying to tell them: 'You want the ball; you want to get the ball. I don't want the ball.' But I love how they just keep up the intensity, and they don't get down on themselves.

"Sometimes people lose the ball and think, I can't get this back; they don't have that mentality."

The Ironmen earned two of their three corners consecutively in the final 4:30 of the third. On the second try, Maddie Rider collected Emma Parker's insert on the right side of the circle and sent it across to Gonzalez-Jenkins on the left side. Gonzalez-Jenkins quickly pushed it forward to Saige Sarviss, who made it a 2-1 game.

Mifflinburg weathered the final three minutes of the period, then re-asserted itself in the fourth with an attack that generated five corner opportunities.

"I think we got in our heads (in the third), and also we were trying to work on some things, and I think it was the wrong time to do it," Mifflinburg coach Emily Stauffer said. "We were trying to work on midfield transfers and passing among each other, and I think we picked the wrong times to execute those instead of moving forward and going to goal."