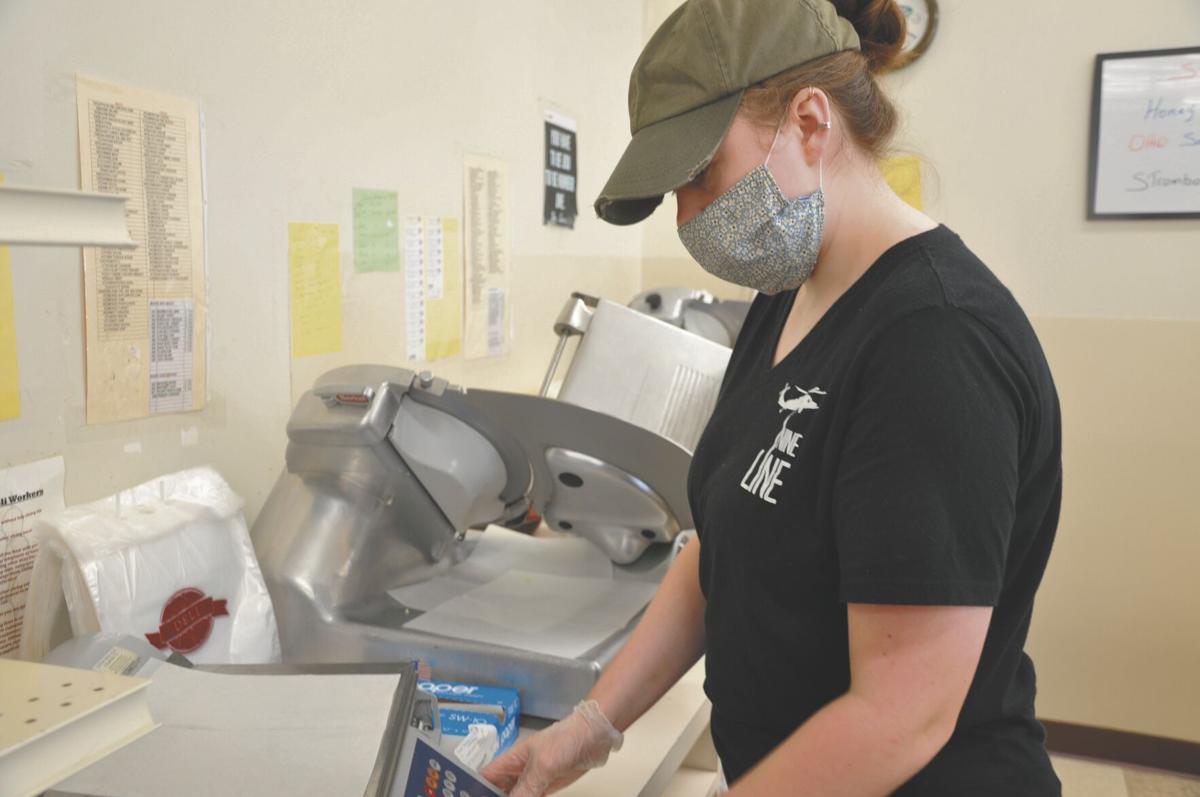 Rachel Gross, who slices meats and cheeses at Crest Haven Market, wears gloves and a mask and said she sanitizes the counter often and handles products as little as possible to keep everyone safe. 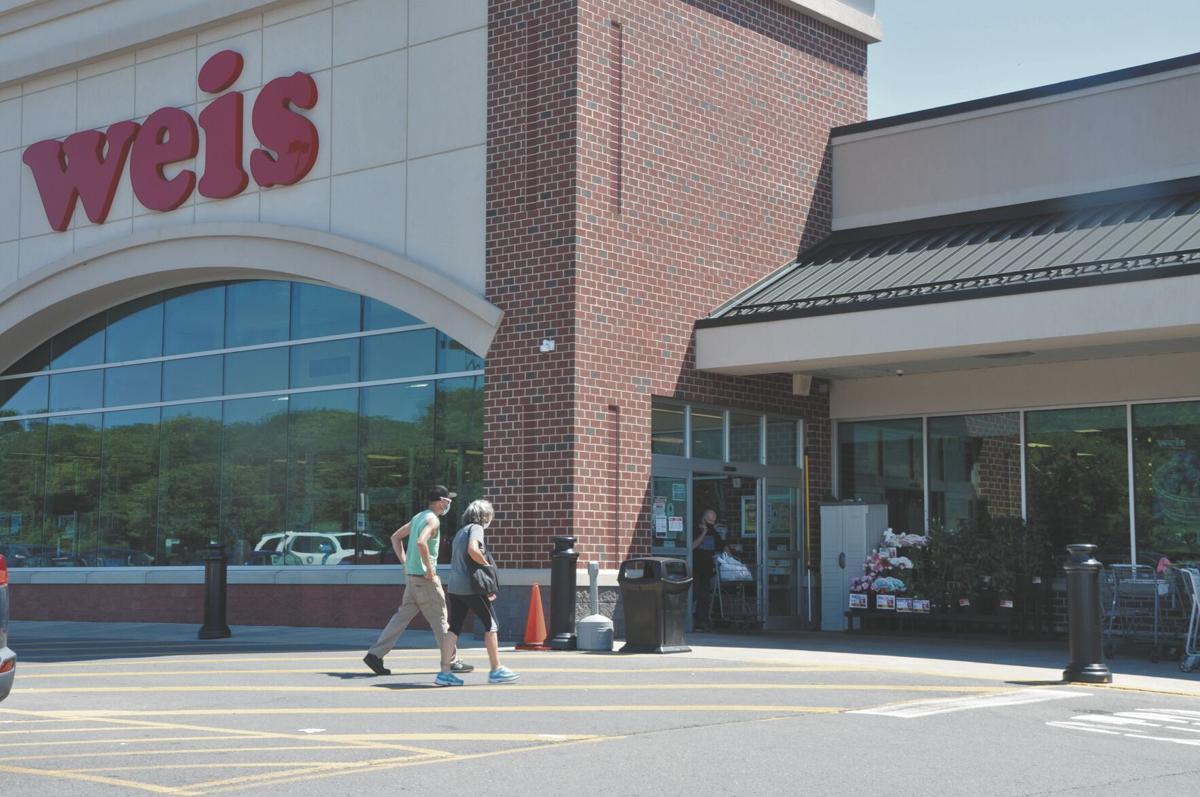 Weis customers are on their way in and out of the Danville store. All are wearing masks, as required.

Rachel Gross, who slices meats and cheeses at Crest Haven Market, wears gloves and a mask and said she sanitizes the counter often and handles products as little as possible to keep everyone safe.

Weis customers are on their way in and out of the Danville store. All are wearing masks, as required.

Everyone needs to eat, and in these days of staying home, that means buying lots of groceries.

“It’s too soon to say what’s to come,” said Ashley Flower, manager of public relations for Giant, “but I can tell you we’re paying close attention to how our customers are shopping and how their behaviors at home are changing — for example, staying in and cooking more — so that we can respond accordingly.”

“January and February were fairly normal,” said Dennis Curtin, director of public relations for Weis Markets, “but then in mid-March, sales shot up.”

Figures for the second quarter, April to June, were not yet out.

Everyone remembers the panic buying of March and April, when whole shelves of paper products were emptied. Curtin explained that “one of the ways to look at everything is through the two main channels—institutional and consumer.”

Before the pandemic hit, there was plenty of toilet tissue in both channels, but it wasn’t easy for manufacturers to shift quickly from producing for institutional use to making products for home use.

“They just couldn’t keep up,” said Curtin. “Even now, you may not always find your first choice, but usually at least your second choice. The quality is back.”

Meat was another challenge in the spring.

Luckily, Weis had made big purchases of beef before the plants had to close because of illness, so that carried them through the early weeks. Even now, the production is less than before due to social distancing in meat plants.

Giant experienced some temporary supply issues for fresh meat in May. Flower said the chain was never completely out of stock.

“Some varieties and cuts weren’t available, and we had to impose a limit for a brief time,” Flower said.

Crest Haven Farm Market, along Route 54 in Rush Township, is a popular destination for lunch meats and grocery supplies. Owner Scott Keefer confirms that a lot of meats were harder to get and higher in price.

“Some have rebounded and some not,” he said.

Flower, speaking for Giant, observed, “This has been a fluid and evolving situation. In the beginning, it was cleaning products and paper products, but at times we also saw an incredible demand for non-perishable items, baking goods, dairy items and frozen items, too.”

Shelves are now generally well-stocked. Keefer, at Crest Haven, worries that if everything shuts down again, “We’ll be in trouble. The pipeline was full at the start of the pandemic,” he said, “but it will be different now.”

Pushing a shopping cart around the store is no longer the only way to get groceries. All three stores are using curbside delivery upon request, plus shopping services like Shipt and Instacart will bring groceries to your door.

“Giant has seen an incredible increase in demand for our online grocery service, Giant Direct, so much so that we hired hundreds of additional part-time and temporary workers to help meet the demand,” said Flower.

Curtin notes that it was a challenging time in the beginning, and Weis stores were so overwhelmed that they had to shut down curbside delivery for two weeks until they could hire more staff. Remote shopping is still higher than pre-pandemic, according to Curtin, but it’s less now than at its peak. He has been pleased with the Weis partnership with Shipt.

Bill Zimmer, a Riverside retiree, is typical of many shoppers. A regular at Giant before the pandemic, he signed up for Shipt in mid-April and used them weekly to get orders from Weis. He thought the service was very good, and that his favorite shopper, Orlando, was especially good at picking out produce. By mid-May, though, he had returned to doing his own shopping.

“I thought getting out to the grocery store was safe enough, and it helped break the feeling of isolation,” Zimmer said.

Now he goes shopping 2-3 times a week, usually at Giant, and since he knows where everything is, he doesn’t have to be in the store very long each time.

All local stores require masks for entry, and the workers are masked as well.

“It’s a huge sea change for the workers,” said Curtin, “wearing a mask all the time, every day.”

Some of the precautions Giant implemented at first, like a single entrance and one-way aisles and a limit to one customer per family, are no longer in place, but the stores supply masks and face shields to all team members and have enhanced their already stringent cleaning and sanitization practices. They have also ended sampling and self-service venues for now.

To cut down on wait times in the store, Giant has implemented Deli-Order Ahead, which allows customers to place their fresh deli order from their phone and just zip in to pick it up. They offer the same service for prescription refills through the Giant Pharmacy App.

“We do our curbside delivery in the parking lot,” said Keefer, “for those not comfortable coming in.”

The staff is all masked as well, except for two young women with medical exceptions. Rachel Gross, who cuts meats and cheeses at the deli counter, added that they sanitize the counter frequently and handle the products as little as possible.

Overall, local grocery suppliers are pleased with how well they have been able to adapt and even thrive in these difficult times.

“I believe we’ve picked up some new customers from the big stores,” said Keefer.

In fact, he and his partner, Shawn Snyder, are going ahead with plans to open a second Crest Haven Farm Market on Main Street in Bloomsburg. A soft opening is set for mid-August.

“It has been challenging at times,” said Flower, to adjust to changes in operations and to stay current on guidelines issued by government and health officials, “but our team of 33,000 has risen to the occasion. We are very proud of our team members for all they’ve done to care for each other, their customers and communities.”