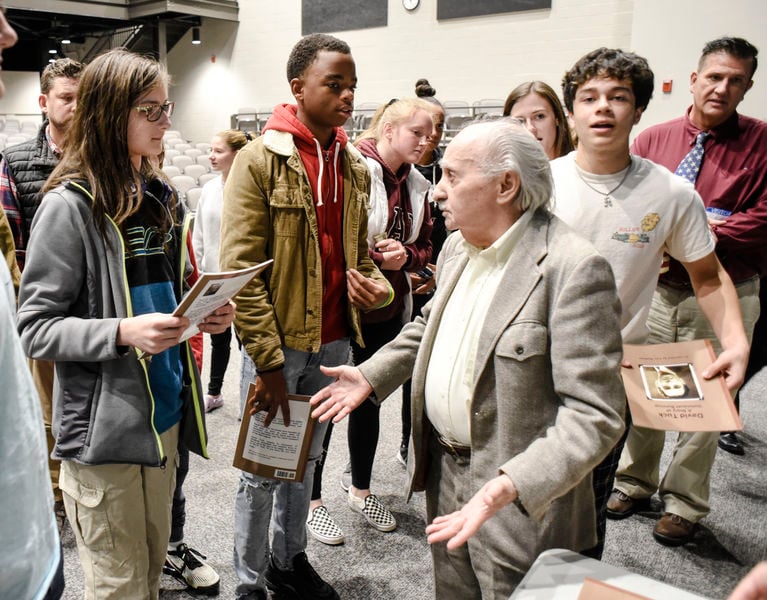 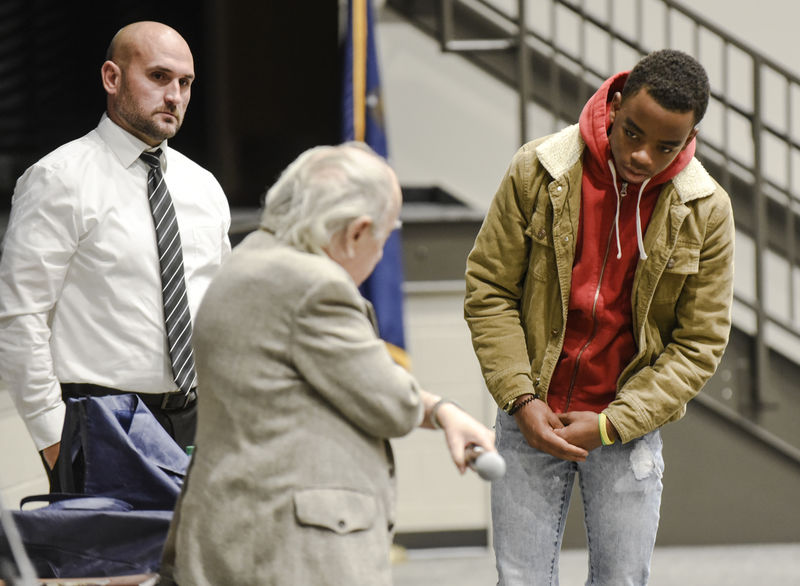 Robert Inglis/The Daily Item Danville High School principal Jeremy Winn, left, and student Tasanju Karmo, 16, look at the number tattoo on the arm of David Tuck that he received while at Auschwitz as a child. 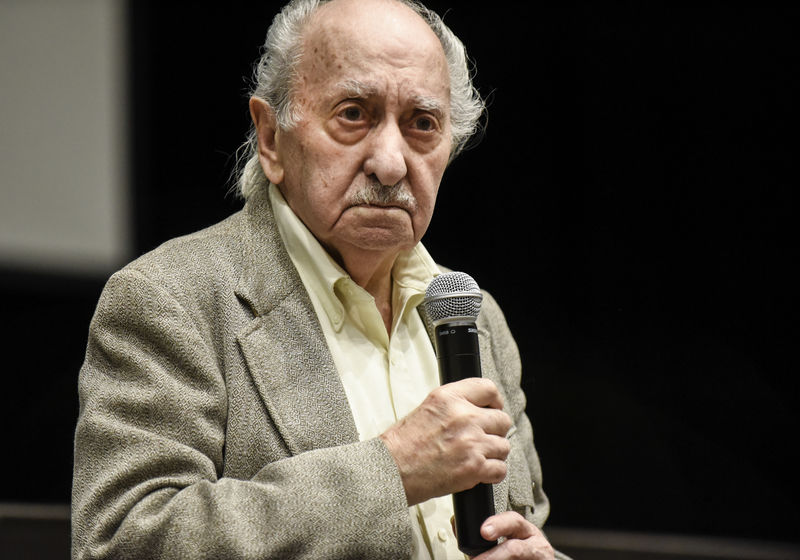 Robert Inglis/The Daily Item Holocaust survivor David Tuck talked to students at the Danville High School on Tuesday afternoon about his experiences at the Nazi concentration camps including Auschwitz. 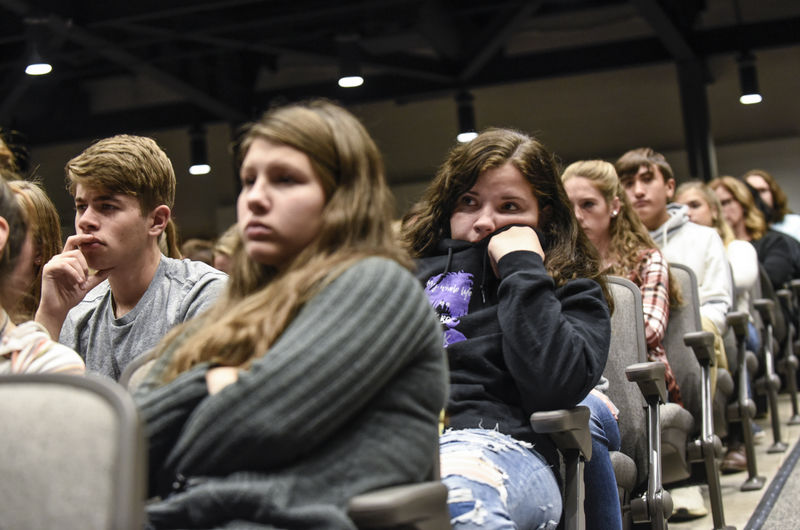 Robert Inglis/The Daily Item Danville High School principal Jeremy Winn, left, and student Tasanju Karmo, 16, look at the number tattoo on the arm of David Tuck that he received while at Auschwitz as a child.

Robert Inglis/The Daily Item Holocaust survivor David Tuck talked to students at the Danville High School on Tuesday afternoon about his experiences at the Nazi concentration camps including Auschwitz.

The 90-year-old from Levittown told Danville Area High School students not to hate. "Hate will destroy you," he said Tuesday.

He also told them to walk away from bullying and to get a good education. "The first thing I got in America was a dictionary," said Tuck, a native of Poland, who speaks four languages.

Tuck, who speaks at schools, universities and prisons, said he Skypes with people around the world.

"You will probably never have the opportunity again to hear his incredible story," said Principal Jeremy Winn.

"It is important that kids hear no matter what tragedy they go through they can survive if they look on the brighter side," said Barb Spaventa, who met Tuck through a World War II Roundtable and arranged for him to speak at the school. She has since met six Holocaust survivors from various countries and serves as a director of the Central Pennsylvania WWII Roundtable. Her son Luciano is a ninth-grader at Danville Area High School.

Tuck said he has been speaking about concentration camps for 35 years "to make sure we never forget."

He said he wished all states made it mandatory to learn about the Holocaust with only 12 states doing so. According to the United States Holocaust Memorial Museum, the states required to teach the Holocaust are California, Connecticut, Florida, Illinois, Indiana, Kentucky, Michigan, New Jersey, New York, Rhode Island and Virginia — Oregon recently passed legislation requiring it to be included in the curriculum but that won't go into effect until 2020.

As prisoner number 141631 — which was tattooed on his right arm from a pen and a needle pushed into his skin — Tuck said he was lucky and he made it. After his mother died six months after his birth, he was raised by his grandparents and attended public and Hebrew schools. When he was 8, he met his father for the first time.

After Germany invaded Poland on Sept. 1, 1939, the 10-year-old was forced to wear an armband and a yellow Star of David. He had to step off the sidewalk and into the street when approached by German soldiers.

His family was deported to the Lodz ghetto, where the boy who spoke German worked in a food card ration office.

"Every night, I thought it would be the last night," he said.

Tuck arrived at Auschwitz on Aug. 25, 1943, where he made anti-aircraft guns in a sub-camp known as Eintrachthutte.

In January 1945, he and more than 900 others were sent by train to Mauthausen in Austria. The journey lasted more than four days and was 370 miles. He survived by scooping snow into a tin cup tied to his belt.

He was sent to Gusen II, an underground factory, to build German aircraft. Men with machine guns told him he was going to be set free and American soldiers arrived on May 5, 1945.

At 15 and weighing just 78 pounds, he was told not to overeat because he could die. He said he took a bite of a piece of bread at a time, counted to 20 and then took another bite.

"I survived," said Tuck, who first went to Italy and later to France. He met his wife, Marie, who died 14 years ago and was also a Holocaust survivor, in France. They were married in Germany before immigrating to the United States in 1950. He was sponsored to work in a U.S. men's clothing factory in Brooklyn and later opened an interior decorating store.

Teenagers lined up to buy Tuck's book, "David Tuck: A Story of Holocaust Survival" after he spoke.

For some students, this was not their first time hearing Tuck speak.

Among them were Aaryan Chopra, a 16-year-old junior, and David Friedenberg, a 16-year-old sophomore, who attended the presentation when Tuck visited St. Joseph School in Danville. Chopra said he wished more people would focus on being aware of other cultures.

"It is very touching to me. I am Jewish myself. It is touching every time I hear his story," Friedenberg said.

Sophomore Aurora Bowling, 15, said she is Jewish and she really appreciated his visit. She said she and her mother struggle with being discriminated against because of their religion.

"It was a very tragic time and I appreciate him taking the time to speak. I know how hard it is for someone to do that," she said.