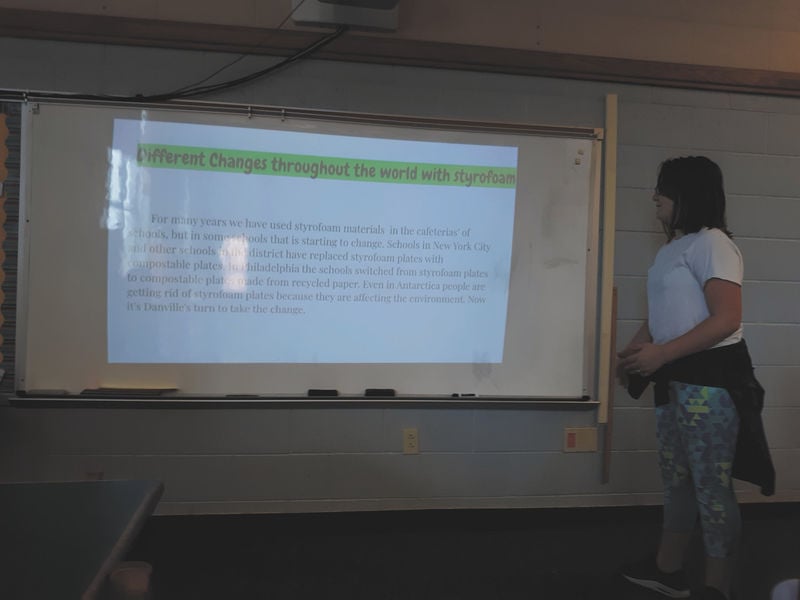 Jadelyn Sarviss shows part of the students' presentation she and other fifth-graders made to school and cafeteria officials to help save the Earth. 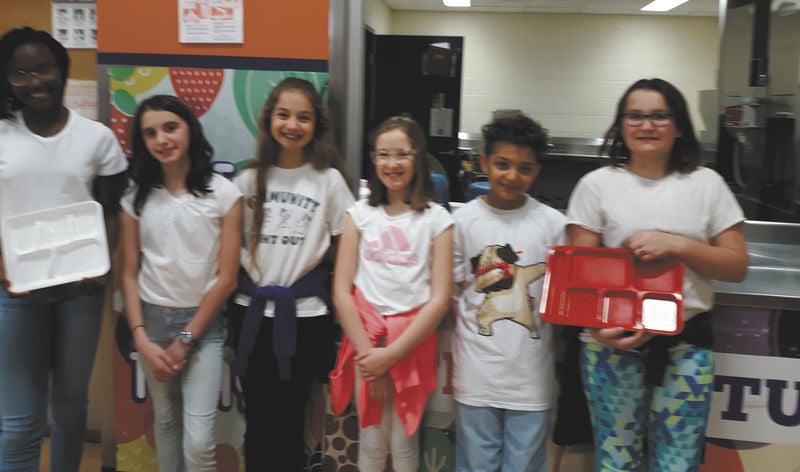 Jadelyn Sarviss shows part of the students' presentation she and other fifth-graders made to school and cafeteria officials to help save the Earth.

"They clapped for us when we sat down," Sydney Clarke, 11, said of other students in the cafeteria. The group is trying to do its part to save the Earth. Besides Sydney, other group members are Lily O'Rourke, 10, and 11-year-olds Jadelyn Sarviss, Sarah Rummerfield, Seth Hahn, Kylie VonBlohn and Sara Ray.

They urged school administrators and officials of the company that provides food services for the Danville district to help save the environment by switching to plastic trays, which the school already has and are reusable, instead of Styrofoam. The students said Styrofoam takes 500 years to decompose and contains chemicals that can leak into food and drinks.

After they met with the students Thursday, School Principal Lee Gump said he and other officials decided to ask food service provider Metz Culinary to use the best staffing possible so there is enough staff and plastic trays can be used.

Bob Lauck, general manager of Metz for the Danville district, said he supported the students.

"They were very well-prepared and researched their presentation," he said.

The students thanked him Monday afternoon. "I am happy to help," Lauck said.

Lauck said his company wants to support the students as much as it can and to support the environment, but finding people to work in cafeterias is an issue.

Liberty Valley head cook Patti VanHorn said they had four people working in the cafeteria on Monday, which was enough to use the plastic trays where the dishwasher is used along with hand-washing.

For lunch, they serve nearly 300 students.

She said they were short-staffed for breakfast and had to use Styrofoam trays Monday to serve 100 students.

Lauck said Styrofoam has been used "on and off" at other schools in the district.

The effort began when Burke's library class focused on the environment last week to observe Earth Day, which was April 22.

She told them that schools, including those in Philadelphia and New York state, were among those "going green" to get rid of Styrofoam. "It was a good learning experience for them. They were upset and asked what they could do about it," she said.

They first met with Gump and then prepared the presentation, with assistance from Burke, where students took turns speaking. "They were very respectful. They have a voice and can try to save the earth," Burke said.

In her part of the presentation, Sydney said plastic trays would save money since the district already has them. Burke found it costs more than $5,038 a year to buy Styrofoam trays.

Seth spoke of alternatives to using Styrofoam, such as bamboo leaf trays that cost 84 cents each. "We all try our best to keep the world clean," he said.