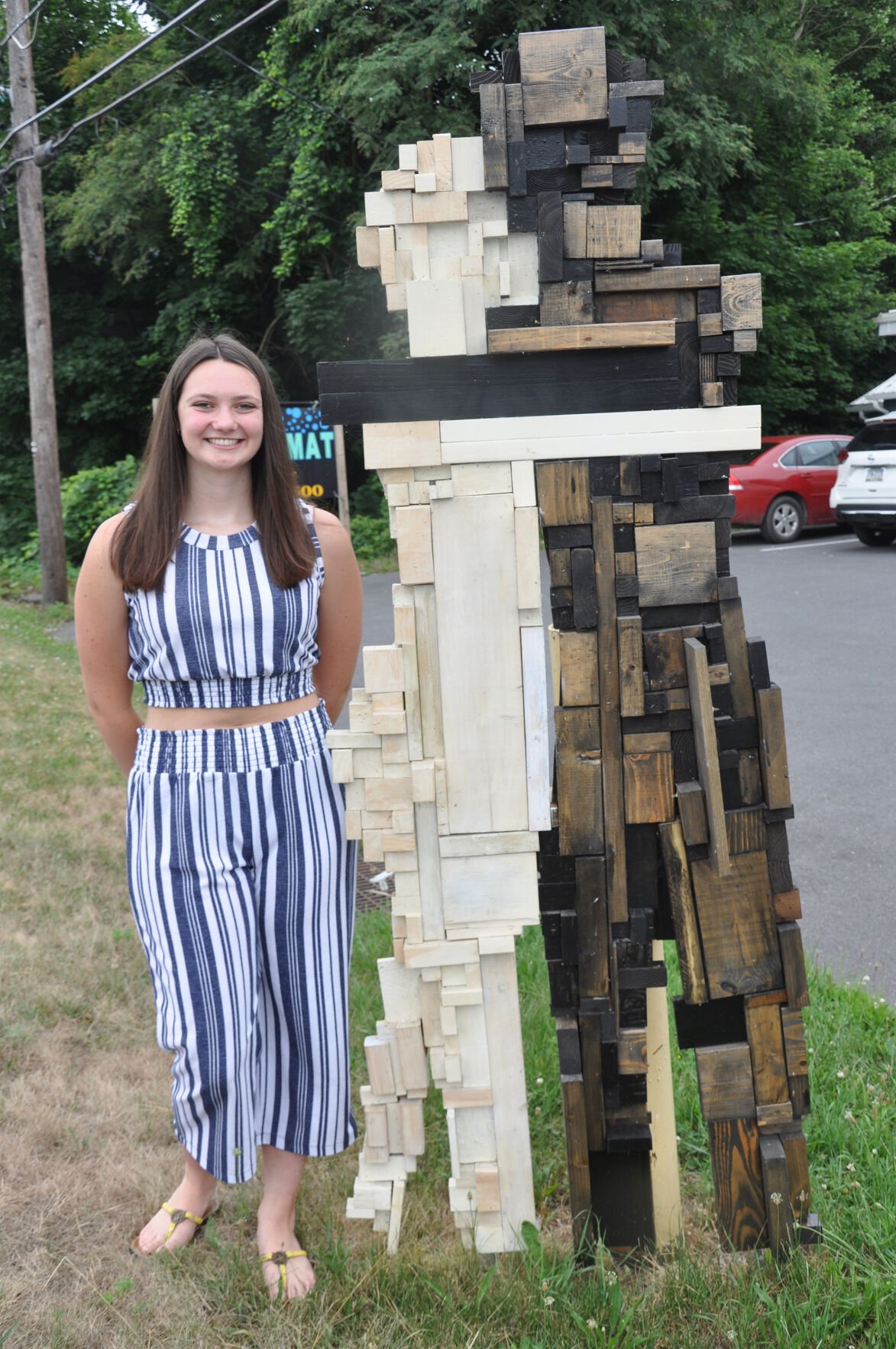 Artist Jenna Deal stands beside her 7-foot sculpture entitled "Things We Take for Granted" in front of the Riverside Laundromat. 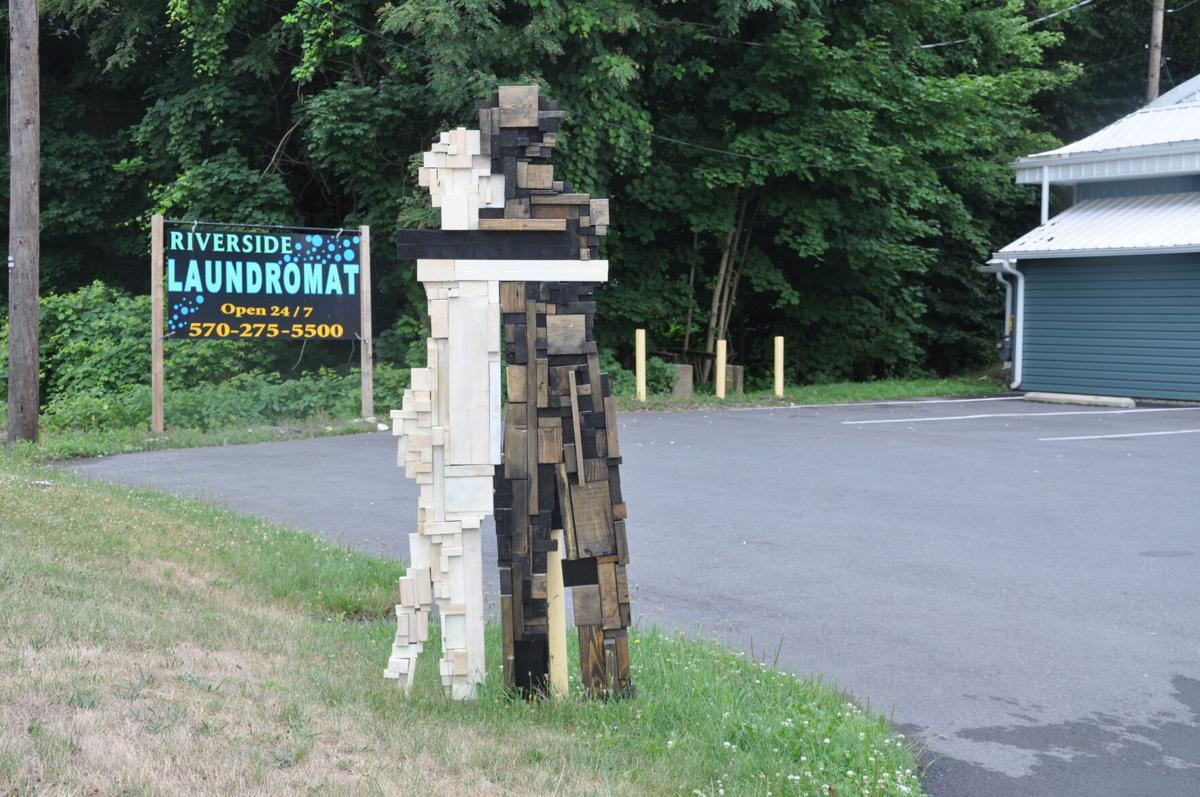 Artist Jenna Deal stands beside her 7-foot sculpture entitled "Things We Take for Granted" in front of the Riverside Laundromat.

RIVERSIDE — In front of the laundromat, across the road from the train tracks, stands Jenna Deal’s 7-foot sculpture of two human figures hugging.

Made of pieces of scrap wood stained dark and light, it speaks a message of togetherness in these days of social distancing. Drivers heading out of town on Route 54 can’t help but take a look.

Deal, a junior at Penn State majoring in sculpture and ceramics, created the piece for her Public Art course in the spring semester. Her final assignment was to produce a work of art to install on the Penn State Campus for everyone to see, but by mid-March she was back home studying remotely. So she came up with idea, selected materials from odds and ends in her dad’s woodworking shop, and started thinking about where she might display the finished product.

What better place than along a well-traveled public highway. Fortunately, her parents, Jack and Betsy Deal, owners of the Riverside Laundromat, were able to help her out. “We originally planned to mount it near the building,” Deal said, “but I decided to put it closer to the road so everyone could see it.” The sculpture has even become a location to find in the game Pokemon GO.

Deal’s work of art was inspired by the simultaneous arrival of COVID-19 and the suicide of the brother of a friend. “I started thinking about how important our connections with each other are, including inter-racial friendships,” she said, “and I wanted to make that my message.” She decided to depict two humans hugging, one black and one white, and called the piece “Things We Take for Granted.” Originally, she intended to do a series of sculptures, but she hasn’t found time yet to work on the rest.

Deal grew up in Danville and started doing ceramics in high school. “I always did arts and crafts as a kid,” she said, “but I never wanted to go into an art room at school because everybody was so good.” In her senior year, when she got a 5 out of 5 on her AP Ceramics exam (based on her portfolio of work), she got a big boost of confidence. She also won second place in ceramics in the 2018 art exhibit for high school students sponsored by the Bloomsburg University Art Department. “I bought my first kiln with the prize money from that,” she said.

Jeffrey Lynch, her art teacher at Danville Area High School for three years, has kept in touch with her. “Jenna is one of the most determined individuals I have met,” he said. “She was a standout in my class, and I knew that eventually she was going to pass everyone in whatever she did.”

In 2018, Deal took second prize in the annual High School Portfolio Review and Exhibition at Bloomsburg University. Sue O’Donnell, art professor who has been hosting this competition for regional high school students since it began in 2014, said that each contestant is required to do a face-to-face portfolio review with 4-5 art faculty members, after which several pieces are selected for exhibit. “Seeing and meeting our talented regional high school students is a highlight for many of us,” she added.

Ron Lambert, BU art professor who teaches sculpture, said he remembers Deal’s winning portfolio and thought that “her ceramics pieces were both playful and elegantly designed” and that “her eye for form was more developed than we expected from a high school student.” He thinks it amazing now that “Jenna is taking the initiative to put her work out there for the public to experience.”

Deal graduated from Danville Area High School in 2018 with intentions of going to Indiana University of PA to major in nursing, but a couple of weeks before going off to school, she decided she wanted to do art and switched to Penn State, where her brother was a student. She did ceramics at first, but then after a few sculpture classes, she changed her focus. “Three-dimensional art is what I’m best at,” she said, and she likes the fact that “you can use anything for sculpture, not just clay.” She has worked with wood, texture and fabrics, metal and all sorts of recycled materials. Last semester she took a course in welding.

With the COVID-19 situation and the likelihood of more online classes this coming year, she has dropped her studio art courses for fall and will take her required Gen Ed courses instead, which are more adaptable to online. This past semester she was taking four in-person studios when Penn State shut down, and she found that those didn’t transfer well to remote learning.

In creating the Riverside sculpture, she cut 2x4s, plywood, walnut, pine, whatever she found, into pieces and shapes to staple onto the outline she had constructed out of plywood. The finished sculpture is a mix of wood grains and hues, to which she then applied a wash of black paint to accentuate the black-white contrast she was looking for. She decided to dilute the paint with water and then wipe off the excess so that the grain shows through. The contrast is dramatic from a distance and an intricate mosaic from up close.

To protect it from the weather, she applied four coats of polyurethane. Her dad says she should keep it inside to preserve it, but she feels “it’s not worth putting in the garage for no reason.” Public art is meant to be out for people to see.

Lambert has stopped by to see her piece, and he feels that in these times “when people are hungry to be inspired but don’t know where to look for inspiration, Jenna’s piece fills that need.” He said that “the visual of the embrace displays a message of hope that our differences can be overcome.” He also observed that its location is “not where one would expect to find contemporary art.” He said he is “glad she took the initiative.”

More of Deal’s college artwork can be viewed at www.jennadeal.wixsite.com/artist. Her eventual goal is to go to graduate school for an M.F.A. and then teach in college. “I already know what I want to do with my students,” she said.