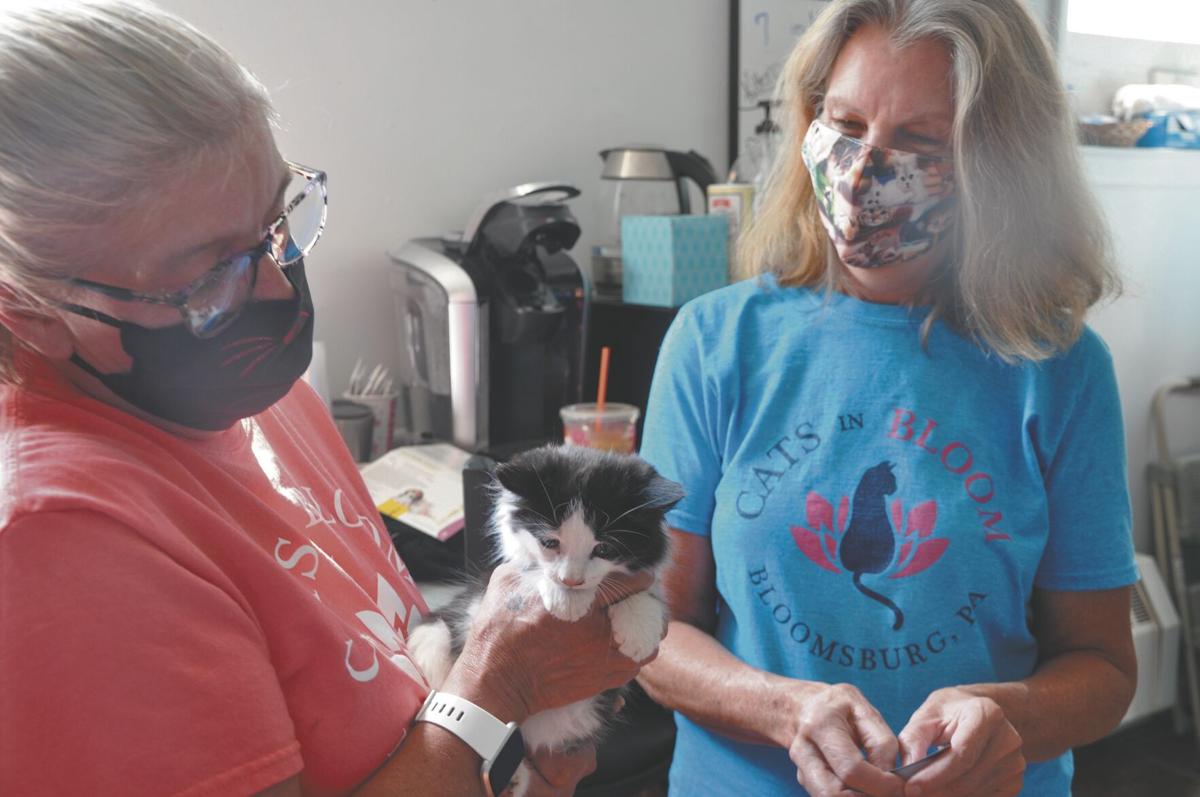 Sue Beaver, left, volunteer coordinator, and DiAnne Leonard, president, the founders of Cats in Bloom, check one of five barn kittens for future adoption. Leonard is a trauma surgeon at Geisinger when she isn’t doing cat rescue. Since they opened their cat café in Bloomsburg in November 2019, they have placed 187 cats and kittens in adoptive homes. 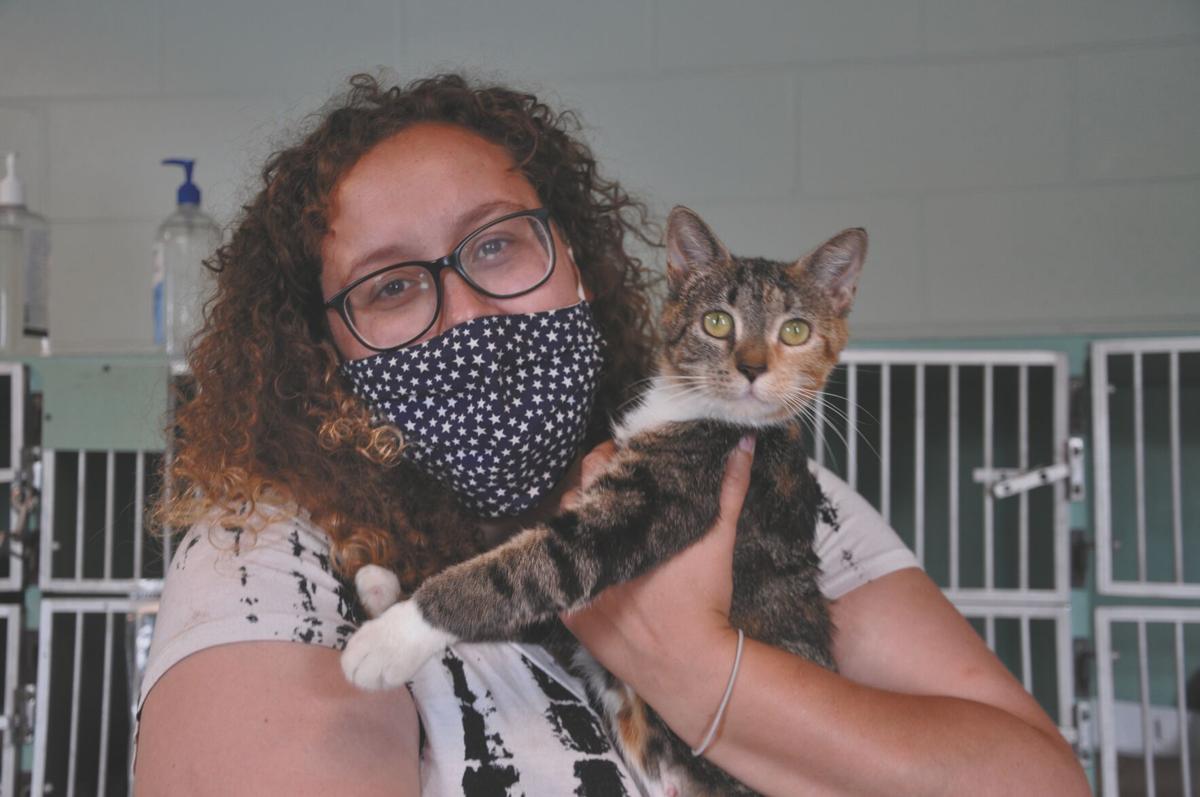 Kristen Szwast, site manager of the Pennsylvania SPCA shelter near Danville, holds Boots, a 2-year-old cat in need a home. In the recent “Clear out the Shelter” campaign sponsored by NBC, the shelter placed a total of 71 animals in new homes.

Sue Beaver, left, volunteer coordinator, and DiAnne Leonard, president, the founders of Cats in Bloom, check one of five barn kittens for future adoption. Leonard is a trauma surgeon at Geisinger when she isn’t doing cat rescue. Since they opened their cat café in Bloomsburg in November 2019, they have placed 187 cats and kittens in adoptive homes.

Kristen Szwast, site manager of the Pennsylvania SPCA shelter near Danville, holds Boots, a 2-year-old cat in need a home. In the recent “Clear out the Shelter” campaign sponsored by NBC, the shelter placed a total of 71 animals in new homes.

Pet adoptions are up in these days of COVID-19, and puppies are in short supply. Cats are more plentiful, but local animal shelters are seeing a definite surge in cat adoptions, too.

“We can’t keep dogs in stock,” said Kristen Szwast, site manager for the Danville branch of the Pennsylvania SPCA.

She recently had just one, a stray someone found and brought in.

“I think COVID makes people value their pets more,” she said. “They have more time to spend with them and so we have fewer surrenders.”

She has heard there is a worldwide shortage of puppies to adopt.

Mostly Mutts, a no-kill shelter for dogs outside Sunbury, has about 70 dogs, only some of which are up for adoption.

“Some of our dogs are permanent residents,” said owner Cheryl Hill. “We take older and sicker dogs that others won’t take.”

The shelter includes 12.5 acres of woods and fields for walking.

Hill has had lots more people interested in adopting dogs in the last few months. “Everybody is looking for smaller dogs, though,” she said. “My bigger ones are still here.”

Her website at www.mostlymuttsonline.com describes dogs available for adoption.

Janice Broder, of Bloomsburg, who just lost her 16-year-old shih tzu dog in June, has started to think about a new puppy.

“I’ve been looking, and there’s nothing,” she said. “People are adopting like mad. All that are left are pit bulls and cats.”

These are good times for cat adoptions, too. Summer is traditionally “kitten season,” and shelters are usually overrun with litters of kittens to adopt. The Danville SPCA has some cats and kittens, but most are in foster homes or already adopted. During their “Clear out the Shelters” campaign this summer, sponsored by NBC, they placed 71 animals.

Kitchen said she is glad people are stepping up to adopt stray kittens. She noted that when elective surgeries were halted in the spring, a lot of planned spaying didn’t happen, resulting in a rush of extra kittens. People are scheduling the spaying now, after the fact.

One animal shelter totally dedicated to cats is Cats in Bloom, right on the square in Bloomsburg. Although this location just opened in November 2019, its founders have been doing cat rescue for about 10 years. Its president, DiAnne Leonard, of Danville, when not caring for rescued cats, works at Geisinger as a trauma surgeon. Since Cats in Bloom opened at its present location, it has placed 187 cats and kittens in homes, according to co-founder Sue Beaver.

Leonard finds there is “definitely more interest in adopting” now, mainly because people have more time and are perhaps a little lonely as they shelter at home. Cats in Bloom has 24 cats and kittens living in luxury in their Bloomsburg cat café, and about 80 more living in foster homes.

When a new cat comes in, they weigh and de-worm it, then take it to the vet for an examination and any necessary care. Next comes placement in a foster home so it can be socialized before adoption. A young kitten will not go out for adoption until it has been spayed or neutered, usually at age 3 months.

A big expense is vet bills. One favorite black-and-white resident named Marshmallow came to them with serious eye problems that required complicated and costly surgery. The owner gave up the cat because she couldn’t afford to fix its problems. Another cat named Marley was found huddled in a drainpipe at Marley’s restaurant.

“They all have a story,” Leonard said.

Money for veterinary expenses comes from donations. Cats in Bloom also raises money from café admission fees. For $5, visitors may come to pet and play with the cats.

“The majority who visit don’t come to adopt,” said Leonard. “It’s often Bloomsburg University students or elderly residents or families with children who just want to spend time with the cats.”

Visitors are limited to six at a time and must be at least 5 years old.

Vet bills are also a major hurdle for Mostly Mutts, said Hill, who has been taking in dogs since 1988. She gets food supplied by Purina but counts on fundraisers to help with vet bills. Because she could not hold her usual events this year, due to pandemic restrictions, she has lost $50,000 so far. Now she is trying some innovative ways to raise the money, such as a summer Mutt’s Raffle, a yard sale, and a drive-through bingo coming this fall. Sponsorships also help. Individuals can choose one or more of the dogs to sponsor for veterinary care, training, or other needs.

Some local shelters make use of foster homes to help socialize their dogs or cats and prepare them for adoptive homes. People who love animals but are not ready for a forever pet can volunteer by filling out an application. These are available on the PSPCA, Cats in Bloom, and Mostly Mutts websites. Foster parents are expected to provide a home, food, and other necessities for at least four weeks.

“People are begging to foster more dogs,” said Szwast at the SPCA.

During the quarantine period in the spring, she sent all her dogs and most cats to foster homes.

Sometimes people adopt a pet before they are ready, observed Hill.

“I tell people to be really cautious about their choices," she said. "They need to know their lifestyle and match the dog they choose to how they live.”

These days, a home situation can change suddenly.

“One guy gave me two of his dogs now that his hours at work have increased because he’s not home enough to be with them,” she said. Hill has four “anxiety dogs” in residence right now because people didn’t prepare their dog well for their return to work.

Luckily, most adoptions turn out well, according to Szwast.