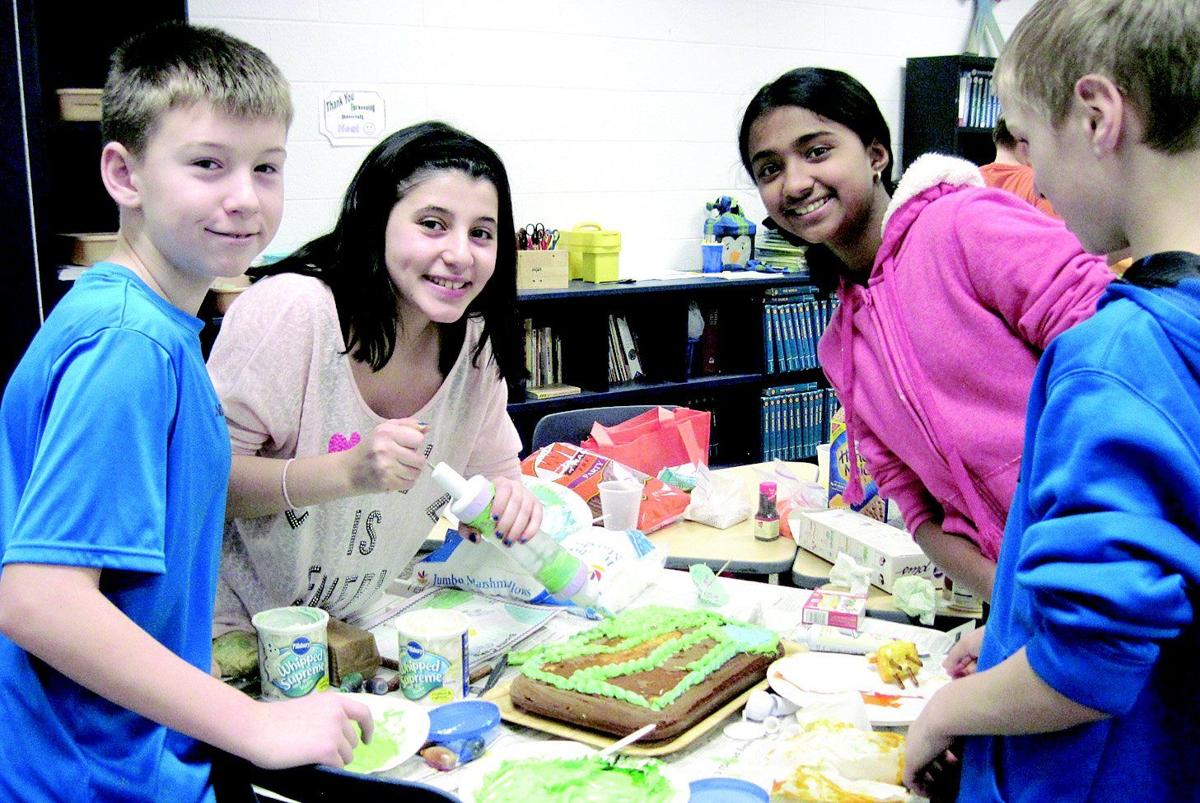 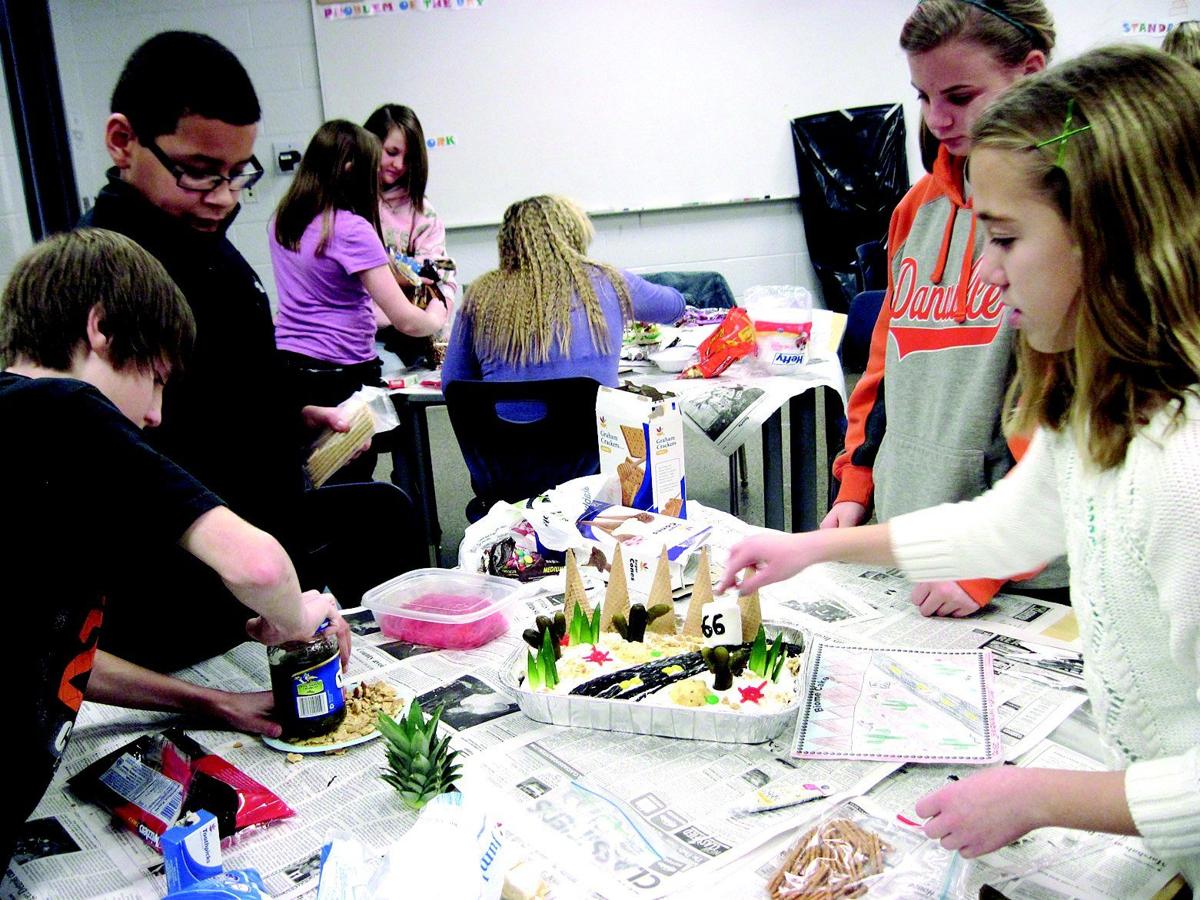 Evan Cochran crushes graham crackers to make sand for the Route 66 desert biome cake he and his team made. From left are Evan, Jayden Rice, Cassie Esenwein and Paige Kupas. 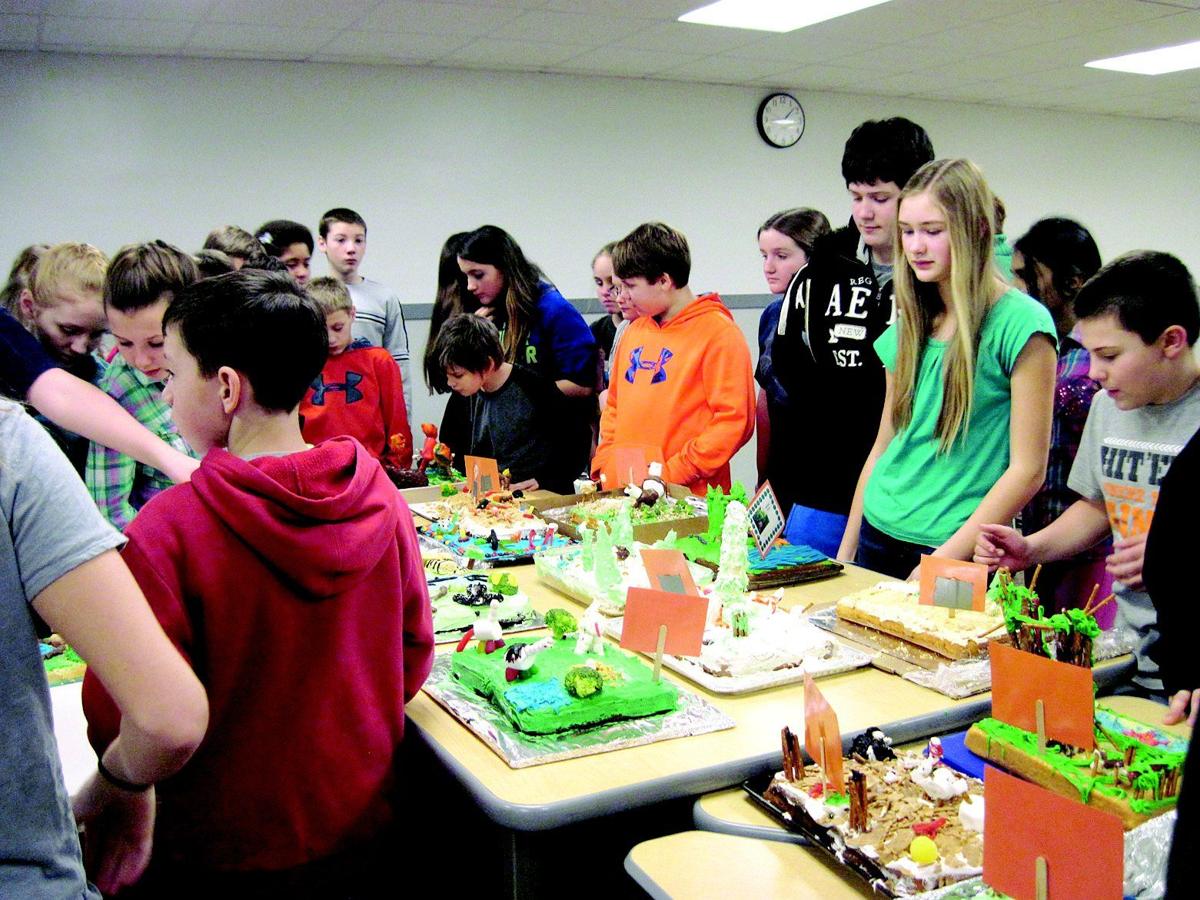 Evan Cochran crushes graham crackers to make sand for the Route 66 desert biome cake he and his team made. From left are Evan, Jayden Rice, Cassie Esenwein and Paige Kupas.

They built biome cakes Friday with pretzel rods for tree trunks, fondant shaped and colored as animals and reptiles, and licorice for Route 66 and a waterfall.

About 190 students participated in the project led by science teachers Richard Smith and Leigh Lehr.

Leena Wardeh, 11, piped green icing onto her team’s tropical savannah. They made a watering hole with blue icing and used rice cereal treats to make the tops of Acacia trees. Tree trunks were made of large pretzel sticks. Leena, who baked the cake, planned to add green icing for the canopy.

They made a hippopotamus from marshmallows and gray icing and a giraffe, lion and elephant from colored fondant. Working with Leena were Joanne Koshy, 11; Caden Mutchler, 12; and Alec Beyer, 12.

“It was very challenging — it’s a lot of fun too to spend time with friends,” 12-year-old Michael Pena said of their rain forest ecosystem. They used red fondant to create a Rafflesia plant and other fondant for a monkey, a tiger, a toucan, a platypus and durian fruit on trees. His teammates were Luke Stine, Kody Jarrett and John Maize, all 12.

Another team created the desert running through Route 66. Mountains were made from upside down ice cream cones, cacti of pickles, a pineapple stalk for yucca plants and black licorice for the highway.

Turtles were crafted from dip scoops and M&Ms. They depicted lizards with pieces of red licorice.

“We learned about the desert, the animals living there and the climate,” said team member Evan Cochran, 11, who crumbled up graham crackers for sand. Other team members were Paige Kupas, 12; Cassie Esenwein, 13; and Jayden Rice, 11.

Eleven-year-old Peter Amarante and Alyse Daku, 12, baked the cake for their fresh water ecosystem of a waterfall flowing into a pond. Blue licorice made up their waterfall. Marshmallows doubled as mist clouds. Water was made of blue gelatin. From colored fondant, they formed frogs, a water scorpion, a turtle and water spider.

Working with them were Mavin James, 11, and Addison Salek, 12.

Smith thanked parents for providing materials for the projects. The work was a joint effort among students, teachers and parents.