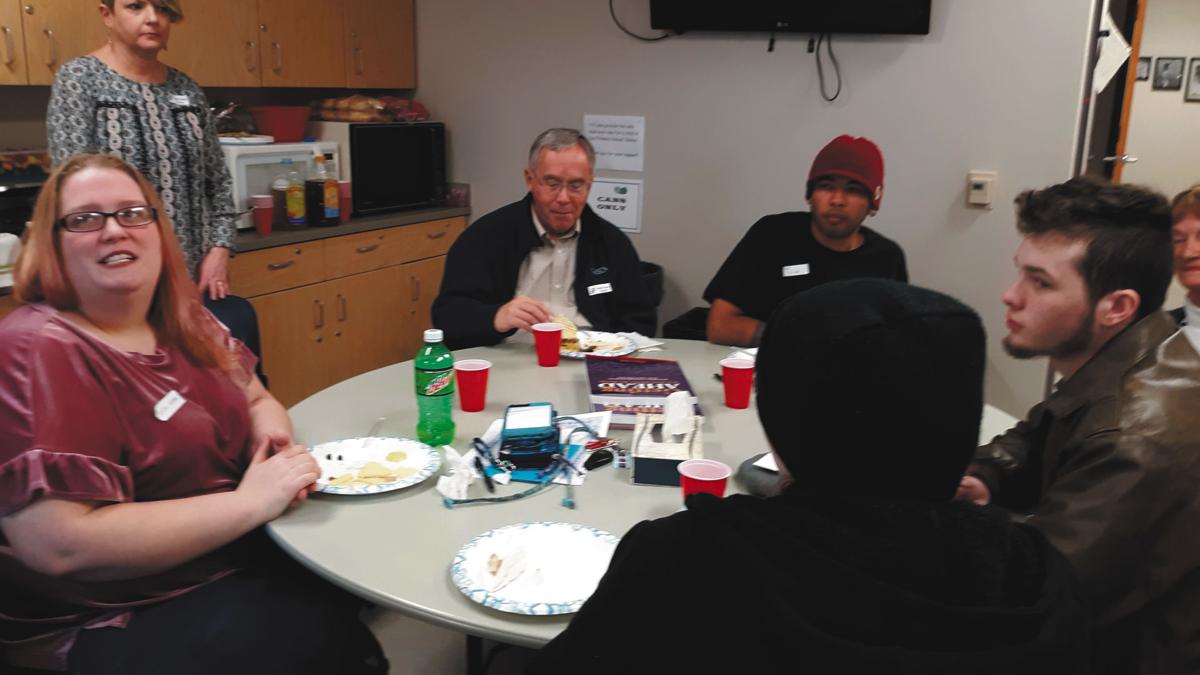 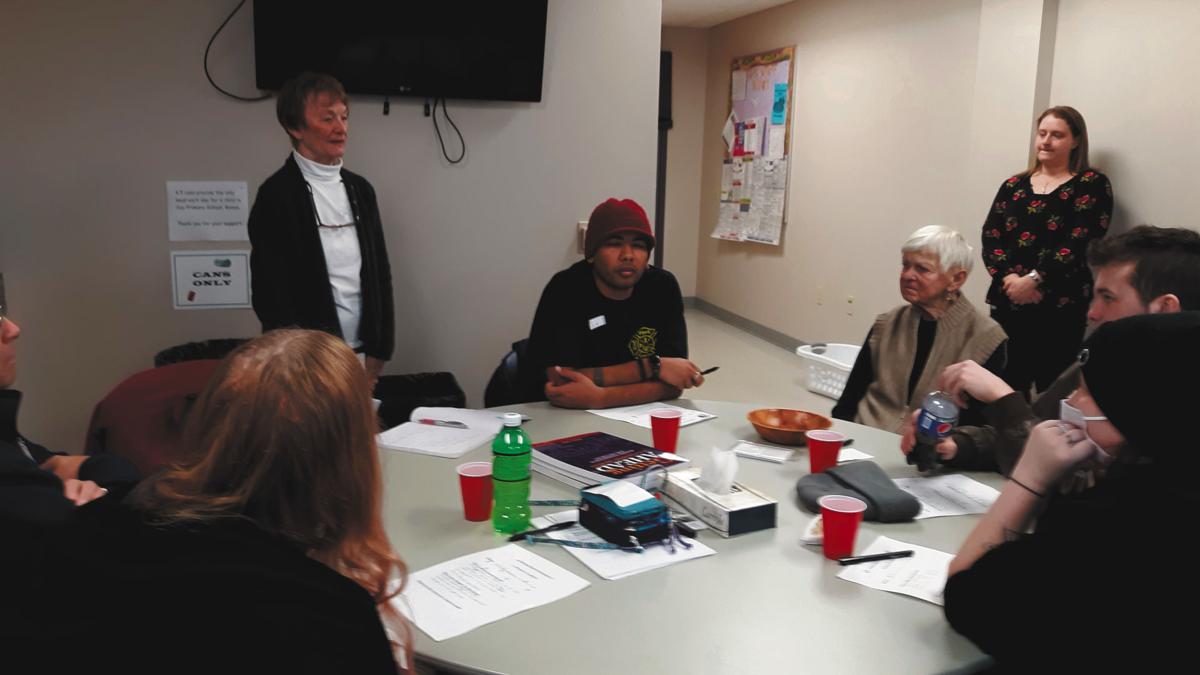 Instructor Joan Miller speaks about the Getting Ahead Program. From left are Good Samaritan Mission board members Bob Davies and Sandy O'Rourke. 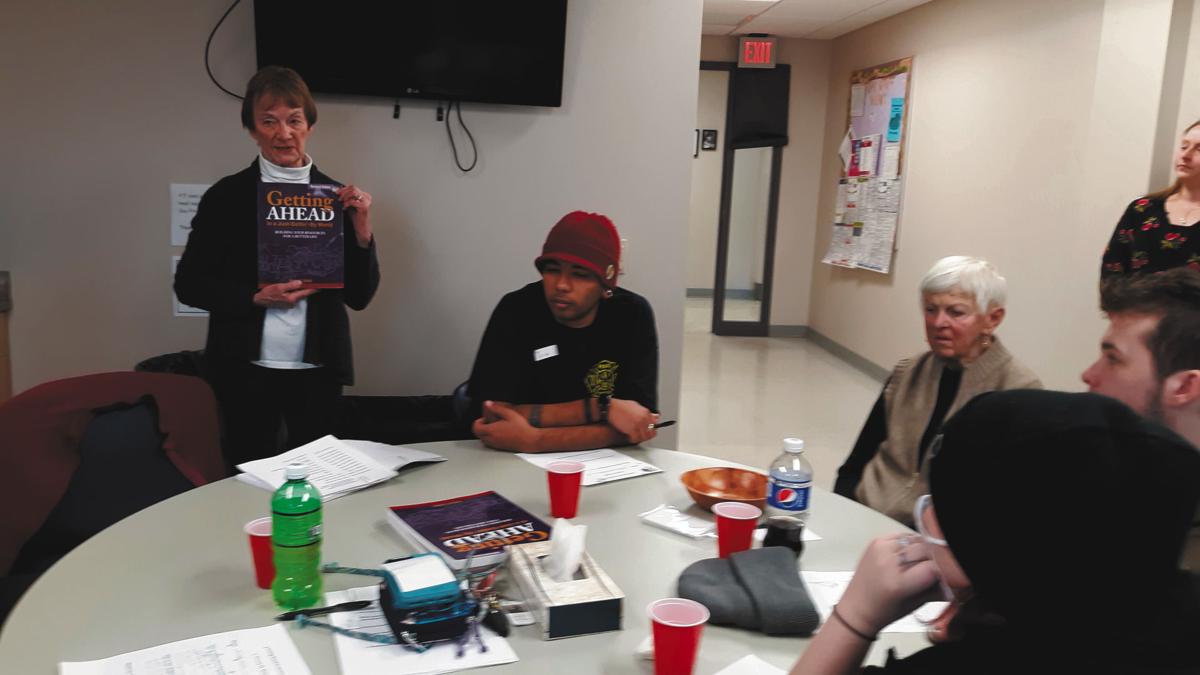 Instructor Joan Millers shows the book used in the Getting Ahead Program where four people graduated Monday. From left are Good Samaritan Mission board members Bob Davies and Sandy O'Rourke.

Instructor Joan Miller speaks about the Getting Ahead Program. From left are Good Samaritan Mission board members Bob Davies and Sandy O'Rourke.

Instructor Joan Millers shows the book used in the Getting Ahead Program where four people graduated Monday. From left are Good Samaritan Mission board members Bob Davies and Sandy O'Rourke.

DANVILLE — Robert Wintersteen was committed to attending classes to improve his life, even if it meant he had to walk to most of them. His efforts paid off when he and three other single parents graduated from the Getting Ahead program Monday at the Danville Primary School.

The program, sponsored by the Good Samaritan Mission in Danville, is based on the "Getting Ahead in a Just Gettin'-by World" book by Philip DeVol. It is for people in poverty or living in unstable conditions related to housing, food, clothing or other essential needs. Students study the impact of low income and poverty and what they need to do to go from just getting by to getting ahead, according to volunteer instructor Joan Miller.

She said they learned a theory of change through a series of steps. Students studied emotions, finances, integrity, trust, motivation, persistence and more.

Wintersteen said he got to speak with adults throughout the program instead of just his 4-year-old daughter.

Also graduating from the 14-week program were Allisa Moore, of Riverside; and Gabbie Powlus and Jacob St. Clair, both of Danville. This was the fifth graduating class since the program began in 2015.

Moore said she learned a lot about herself and how to be a better mom to her two children, ages 7 and 3, through the program. She is "always interested in making a situation better and that makes me a better parent."

Moore works an average of six days a week at Olive Garden in Bloomsburg and the program helped her gain more jobs and income there.

"When my son is a little older, I can't wait to get ahead more," she said.

Through Getting Ahead, she discovered she is often too hard on herself and said she now realizes what she needs to do to progress in life.

St. Clair, who has a 3-year-old son, said the program taught him about achievable goals and motivation.

He also learned hidden language as a way of reading people and whether to deal with them through casual or more formal language.

"It's a cool way to think about it. I work with five with managers and I use hidden language all the time. I never really thought about it before, Moore said.

Powlus said the biggest thing she learned through the program is she wasn't alone. The mother of two said she learned about resources she could use, some of which she had never heard of, and to look differently about choices she made.

Miller thanked the students and the school for hosting the classes and the mission for being a big partner. Throughout the program, participants were given gift certificates.

"These four people can now make changes in their lives," said Sandy O'Rourke, founder of the Good Samaritan Mission. She also praised Miller for her teaching.

Board member Bob Davies told the graduates their commitment of time "wasn't easy each week."